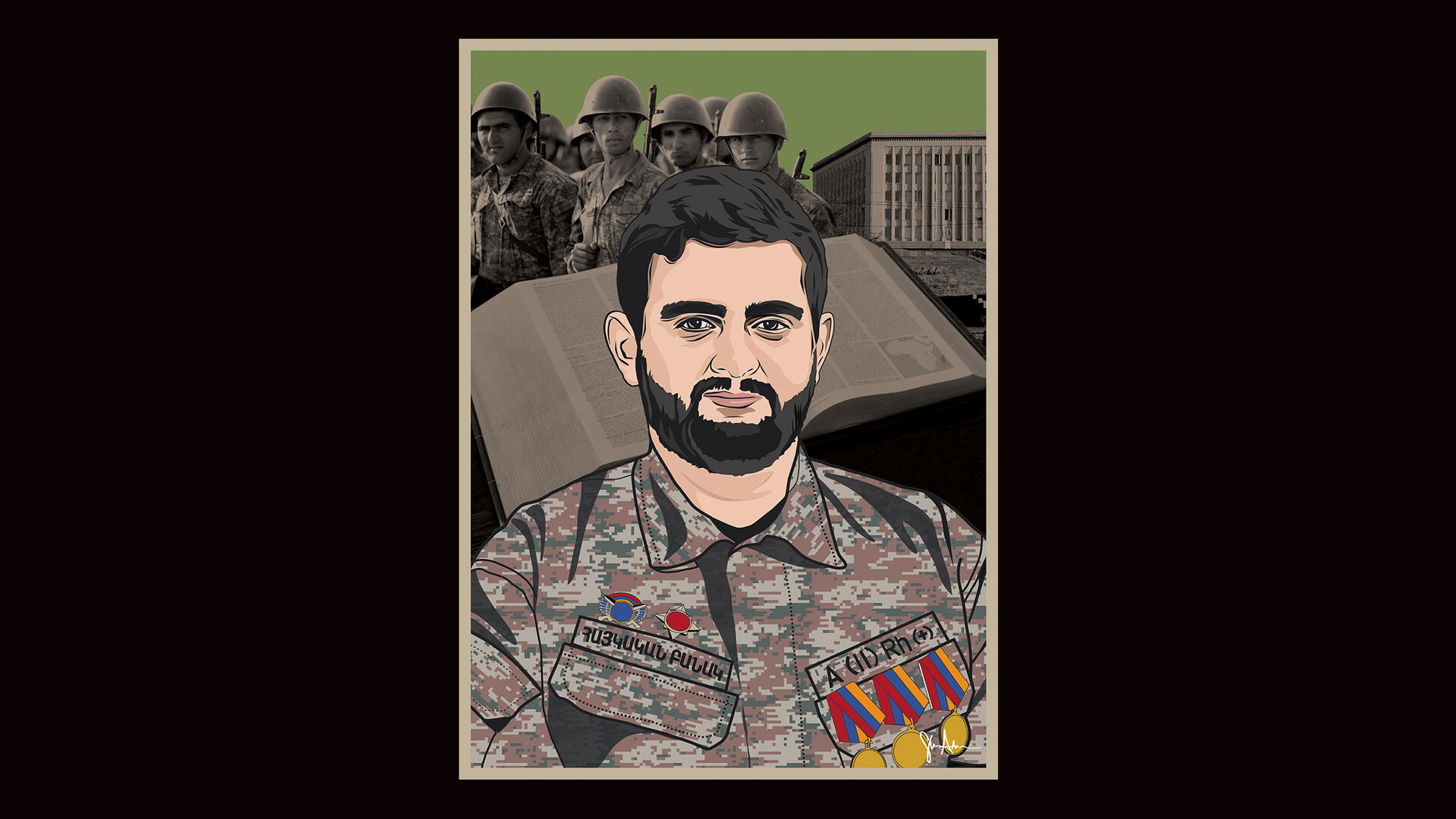 Shavarsh Muradyan, student, soldier, and symbol of a new generation of selfless heroes

It is often said that the mark of a hero is not the result of their action, but what they are willing to risk in the name of a cause greater than themselves. Shavarsh Muradyan was one such hero that represents a new generation—Armenia’s best and brightest who have proven themselves equally as patriotic and duty-bound.

Shavarsh matriculated at the American University of Armenia (AUA) in 2017 with a major in English and Commun-ications with plans to later pursue an MBA. Yet unlike most of his classmates, he had already seen war up close, was older than most students, and more clear-eyed about his hopes for the future and the causes he believed in.

Shortly after he returned to the frontlines after the September 27th assault on Artsakh by Azeri forces, the AUA student body and faculty received the devastating news from AUA President Karen Markides that Shavarsh had made the ultimate sacrifice for the country he loved and the cause he espoused. The flood of heartfelt comments and cherished recollections on the university’s online Memory Book reflected the esteem and respect Shavarsh had earned on campus.

Born in the provincial Armenian city of Kapan in 1996, Shavarsh was inspired by his father’s patriotism in the nineties and followed in his footsteps, vowing to be not only a good son to his family but also to his country. After surviving a traumatic injury in the April War of 2016, Shavarsh received three medals: “Marshal Baghramyan,” “Aghbyur Serob” and a commemorative medal from the Armenia Ministry of Defense.

Still wearing his military uniform to class when he started university studies, Shavarsh was eager to educate his fellow students on the April War. A recipient of the Mario Mazzola and Luciana Cavallet Endowed Scholarship, Shavarsh was a vocal proponent of higher education for war veterans. He also continued attending meetings with the Heroes of the April War group.  His professors and students recall his gift for storytelling, especially about his time at war. “It was hard not to notice him,” recalls a student, “He was always ready to tell a story.”

All my friends who were once Shavo’s careful audience are now on the battlefield in Artsakh. I know Shavo’s experience and knowledge of war will help them survive.

A mentor and activist on campus, Shavarsh never missed a chance to start open dialogues on the importance of patriotism, in or out of the classroom.  Fellow student Anatoli Hovhanesyan observed: “Shavo would talk about war and peace no matter what the subject of our discussion. After his death, some professors sent us Shavo’s essays, and after reading them, I realized all of them were about the war.”

His close friend Norayr Manvelyan says, “His stories of glory loss, martial cleverness, and love of country could go on for hours.  He would become emotional and heartfelt, an inevitable part of any war narrative—it is ugly, ruthless, and inhumane. I couldn’t help but see that he knew war deeply. He knew what it meant to fear war but love it at the same time. War was Shavo’s worst enemy but became the place where he would always return for answers.”

Norayr hopes that Shavarsh’s friends, now on the frontlines in Artsakh, will draw upon their fearless friend’s wealth of experience. “All my friends who were once Shavo’s careful audience are now on the battlefield in Artsakh. I know Shavo’s experience and knowledge of war will help them survive.”

Another friend described his infectious laugh and compelling presence. “He was always the jolliest guy in the world, but that isn’t to say he didn’t take anything seriously. If there’s one thing Shavo never took for granted or joked about was the motherland. He loved Armenia, our language, our culture, our traditions, and our sacred land. I know Shavo would want us to pay respects to all the brave soldiers lost in the war.”

In his 2018 essay describing the transformative impact of the April War, Shavarsh wrote of his experience surviving an explosion—a traumatizing chapter of his life that only motivated him further to defend his homeland. “I woke up two months later in the military hospital. The doctors told me that I had lost so much blood that I lost consciousness and was in a coma for two months. It was a miracle I did not die, because doctors lost their hope to cure me…Since then, I have prayed for peace. But I also promised if something were to begin, I would be the first to fight for my country, family, church, and friends.”

Shavarsh Muradyan kept his promise in the latest outbreak of full-blown war. Surely, his sacrifice, along with those of his brave generation, will be exalted in the Armenian national consciousness.

One month of military engagements in defense of Artsakh
END_OF_DOCUMENT_TOKEN_TO_BE_REPLACED

The building blocks of an unbreakable bond
END_OF_DOCUMENT_TOKEN_TO_BE_REPLACED

In Artsakh, the threat of unexploded munitions lingers long after the war
END_OF_DOCUMENT_TOKEN_TO_BE_REPLACED