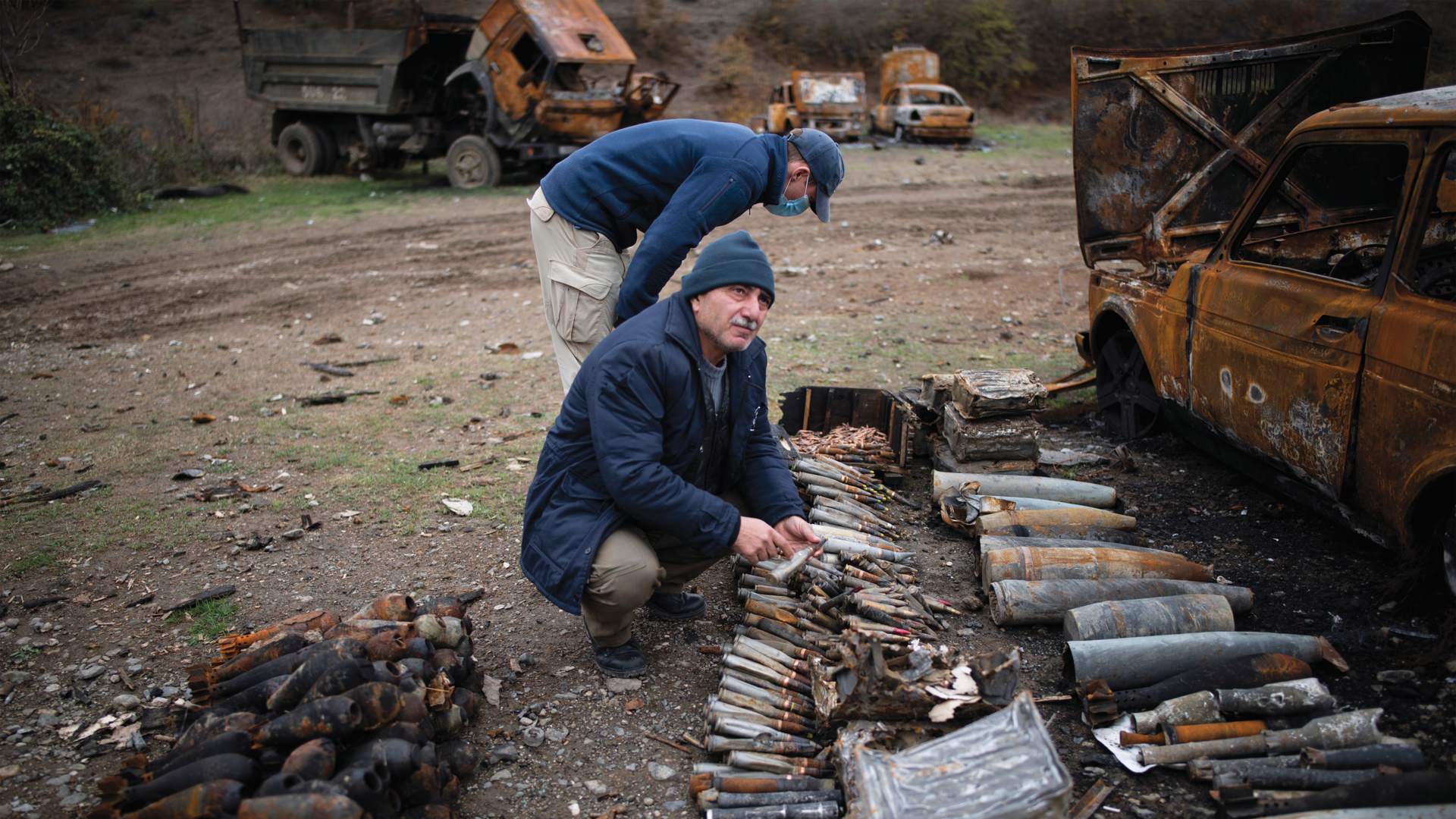 In Artsakh, the threat of unexploded munitions lingers long after the war

In the closing weeks of 2020, while much of Artsakh remained empty, life was once again entering the streets of the capital, Stepanakert. Heaps of shattered glass were swept up in alleyways, shops were reopening, neat rows of children's clothing hung across courtyards, and busloads of families were returning. Many, having lost their homes in Shushi, Hadrut or Karvachar, were making a bid to resettle in Stepanakert, maybe permanently. Still nothing is clear. Nobody knows what tomorrow will bring.

While the return of life to the streets of Stepanakert is heartening, Artsakh is reeling in the aftermath of the war. Sidewalks are covered with pockmarks that look like cascading fireworks, the scars of detonated cluster bombs. Out of context, they might be considered beautiful. But there is no escaping the context, the gravity of the moment. Tens of thousands have been permanently displaced. Those who can return home fear for their safety. With the looming threat of continued attacks, ruined infrastructure, political turmoil, economic devastation, and unexploded ordnance (UXO)—including rockets, warheads, and cluster munitions—scattered throughout residential areas, it’s not hard to understand why.

Thirteen kilometers from Stepanakert, just outside the village of Aygestan, a major ammunition depot was destroyed in early October by an Azeri strike. “First we heard the drones,” recalls Marine Sargsyan, a teacher at the Aygestan school, “then the rockets started. And we knew it was the depot. We went down to the cellar. The explosions went on for two hours and fifteen minutes. The sound was deafening. The doors and the windows of the cellar got blown out. We thought it was the end of us.”

The depot buildings are burned to the ground. The remnants of the blast—rockets, warheads, cannon rounds, and other munitions, some still fused—are scattered as far as the eye can see and beyond, for at least a four-kilometer radius. The HALO Trust, which has been active in Artsakh since 2000—clearing landmines and UXO from the war in the 1990s—is hard at work in the aftermath of this recent war. They are beginning the clearance and safe disposal of explosives across Artsakh, prioritizing the worst hit and most densely populated areas, like Aygestan. In addition to HALO, Russian peacekeepers and emergency services crews are carrying out some degree of UXO clearance, but it will take an immense amount of time and resources to clear this site alone. 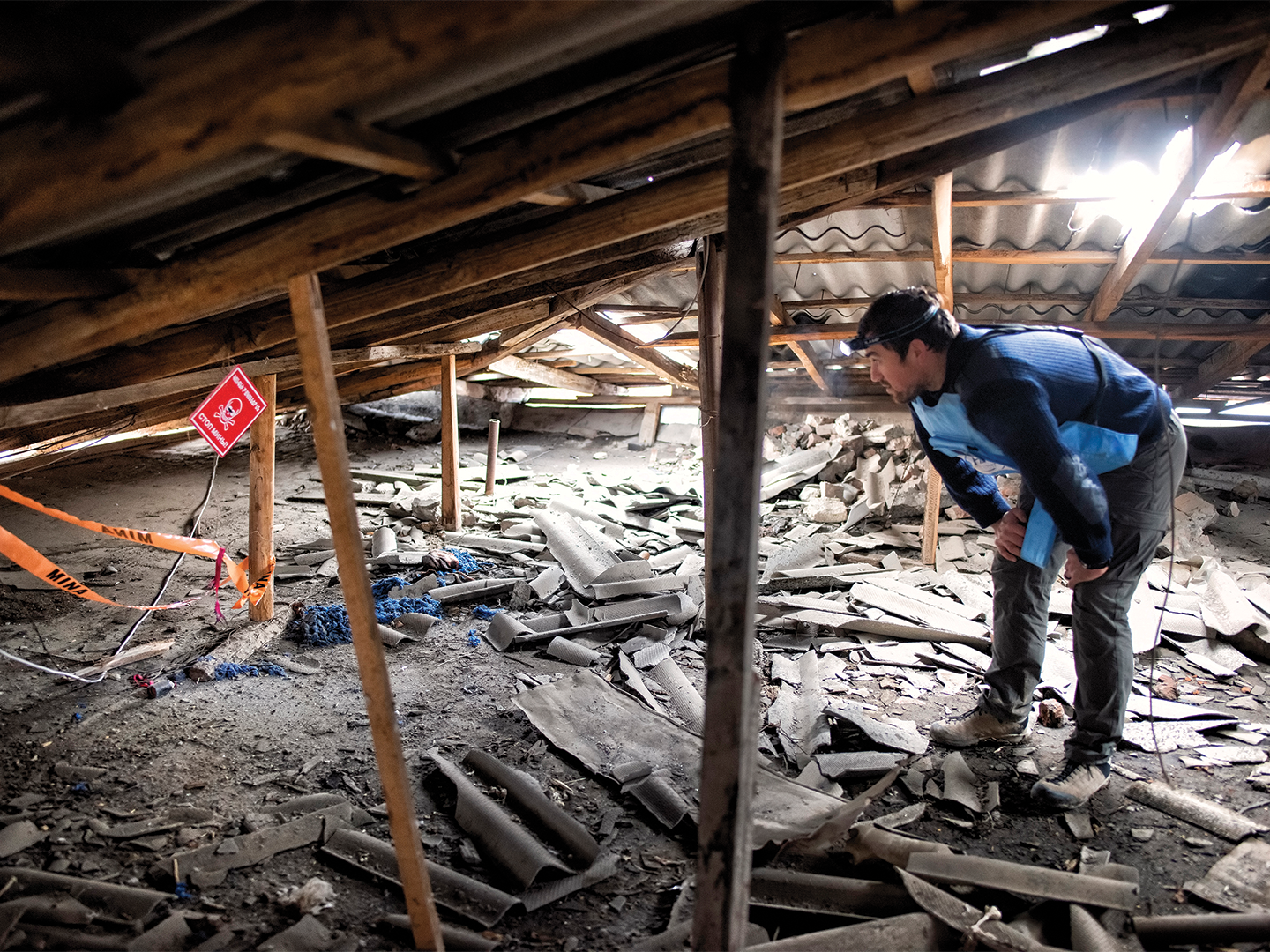 Wes Tomson, the HALO Trust’s EOD technical advisor works to clear a cluster munition from the eaves of a large apartment complex in Stepanakert. Photo by Scout Tufankjian
Image 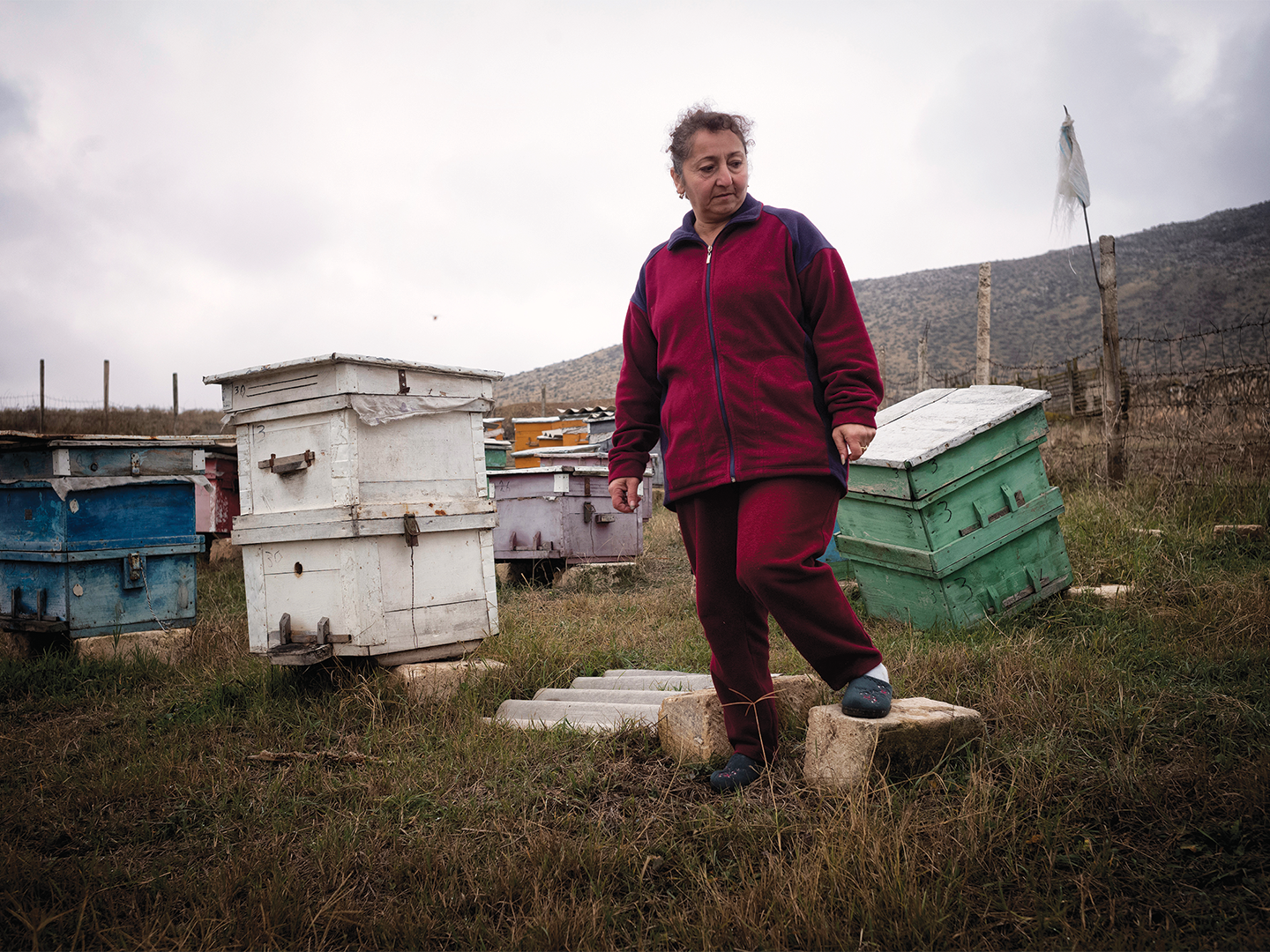 Gayane Mangasaryan returned to her home in Martakert to find her family’s newly built roof damaged from the shelling and their beehives strewn about.
Image 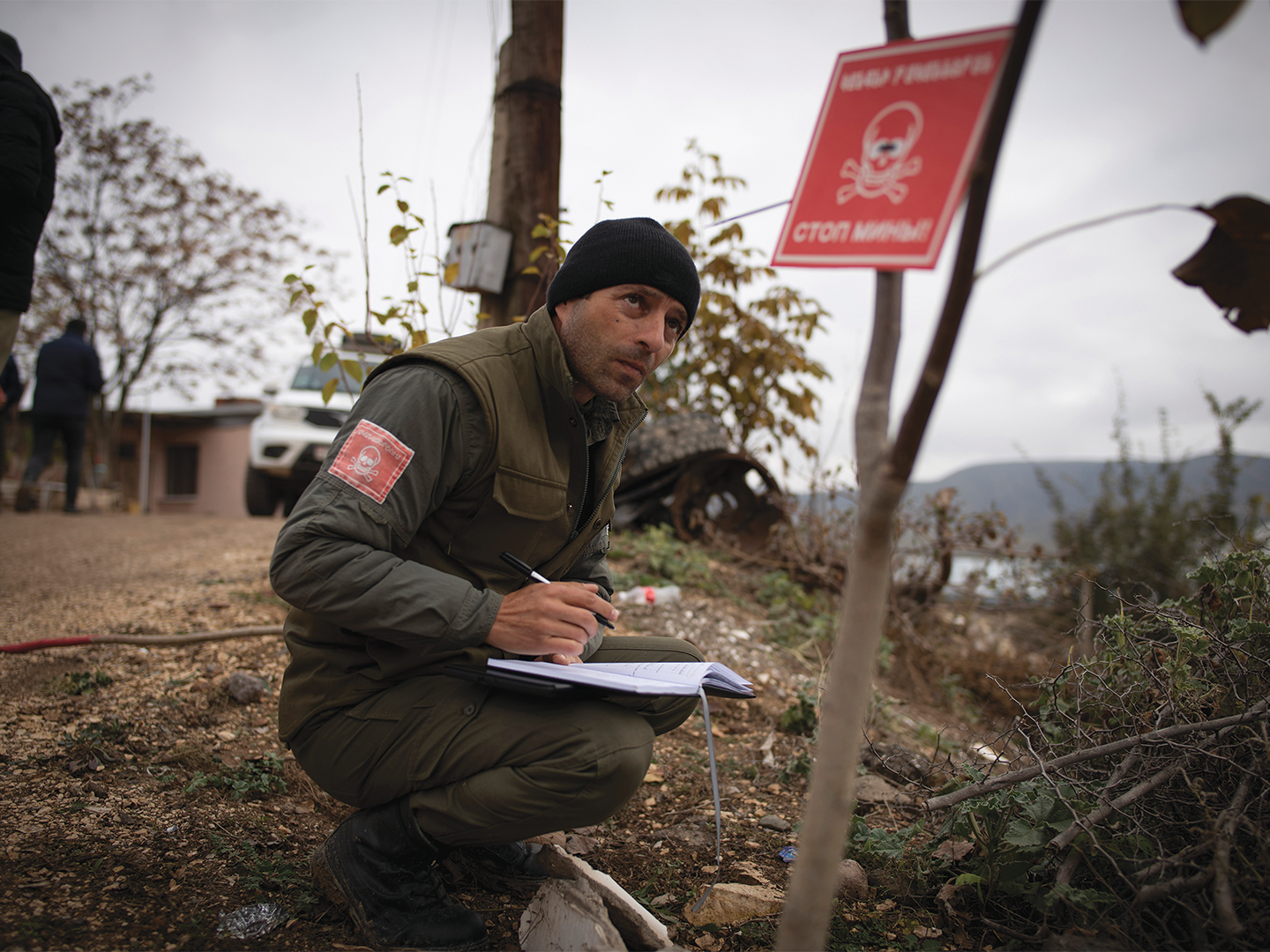 HALO staff visit Martuni in order to assess the needs of the local community and locate and mark out any UXO.
Image 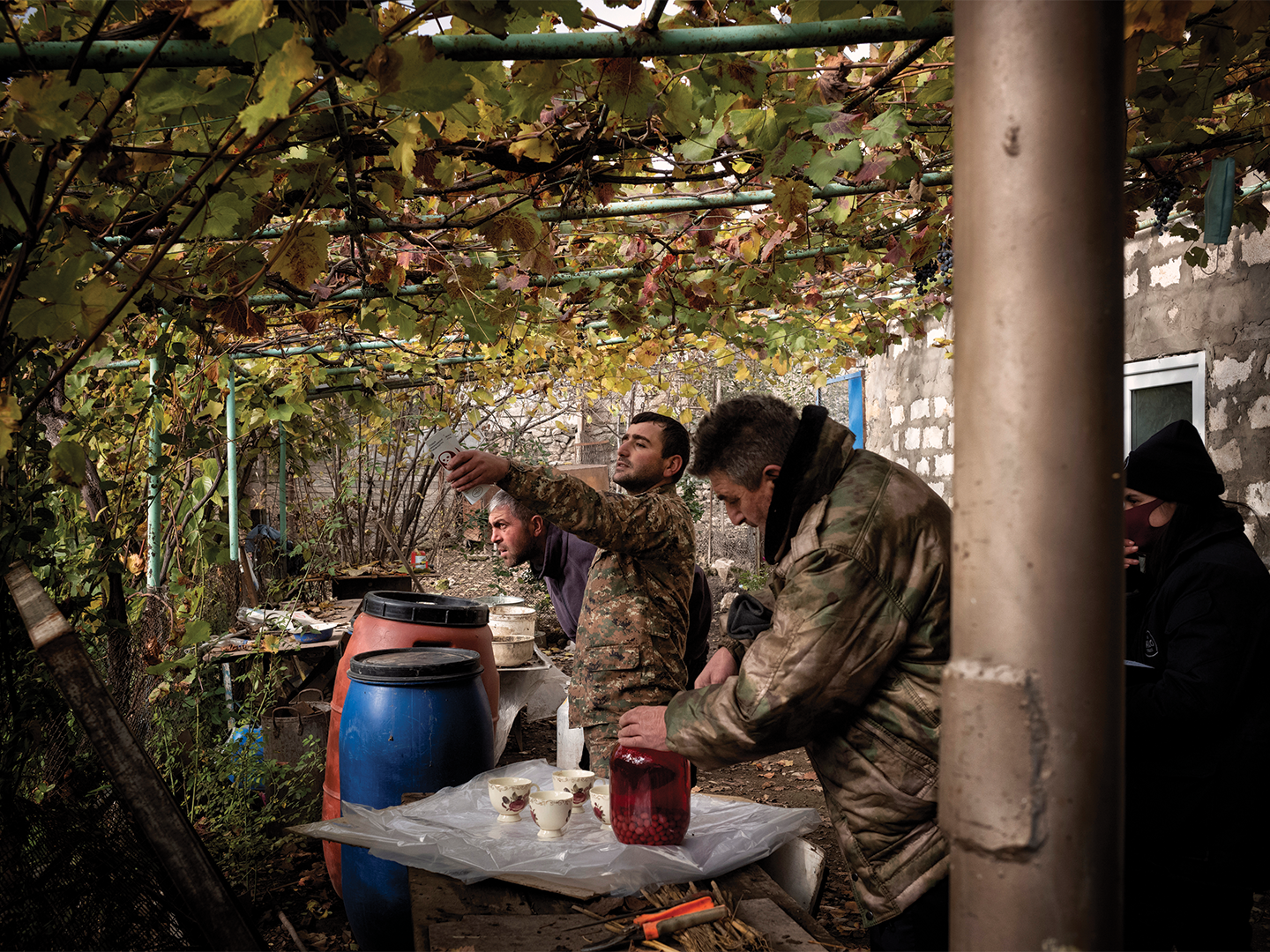 HALO Trust staff talk to Narek Atayan, the young mayor of Karmir Shuka, and his father at their home.
× < >

It is impossible to overstate the damage done and the danger that still exists in Aygestan. For families from here and across Artsakh, the decision to return is, in itself, hard enough. To come home, like school teacher Anahit Shumanyan did, to find a Grad rocket in her henhouse, makes it that much harder. “Everyone is finding something in their yard,” she says. “It’s not just us. This is different from the ’90s. Back then the war was fought on the battlefield. This one entered our homes.”

Aygestan’s school has been damaged by the blast at the ammunition depot, just a few kilometers away. Not a window remains intact, the walls are badly pockmarked. When a team from HALO arrives to deliver explosive ordnance risk education, the session has to be held outdoors. Kids, like fifteen-year-old Garnik Nasibyan, have been spending their days walking around their neighborhoods collecting bullets, fuses, and warheads. While they are used to living among the detritus of previous wars, much of this new explosive contamination is still live. Picking up or kicking over the wrong scrap of metal could cost these kids their lives.

The dangers that lurk in the aftermath of war are nothing new to the people of Artsakh, who still encounter landmines from the war in the 1990s. Landmines are mainly found in fields, along mountain ridges, and in agricultural areas. There are still accidents caused by them, often resulting in lost limbs and even death. According to the HALO Trust, there have been more landmine accidents per capita in Artsakh than anywhere else in the world. Since 1995, one in every 382 people in Artsakh has been killed or injured by a landmine or UXO accident and a quarter of the victims are children. Now the risk has increased significantly.

According to HALO Trust, there have been more landmine incidents per capita in Artsakh than anywhere else in the world.

The major threat in the wake of the recent war comes in the form of cluster munitions and other unexploded ordnance, not only in the battlefield, but in urban areas. The most notorious among them are the M-85 cluster munitions, the source of the spiraling scars on the sidewalks, instantly recognizable by their tell-tale pink ribbons which attract the eyes and curiosity of young children, who often mistake them for toys. Even the lightest touch can detonate them and maim or kill innocent victims, months or years after the war.

One of these M-85 cluster munitions is lodged in the attic of an apartment complex in a busy neighborhood in central Stepanakert, across from the Karabakh Telecom building, which was all but destroyed by shelling. A team of HALO explosive ordnance disposal (EOD) experts is performing a risky but necessary clearance operation. Araik Bakhshian, a native of Stepanakert and one of HALO’s most experienced EOD experts, hoists himself up a rickety ladder, puts on his kevlar vest and begins to meticulously arrange the tools and gear he has carried up for the task ahead.

In an open area, the EOD team could safely destroy this type of munition. Here, however, in a heavily-populated apartment complex with children’s bikes propped up in the stairwell just a floor below, it has to be removed with extreme caution, and taken to a place where it can be destroyed under controlled circumstances.

Mr. Bakhshian and EOD Technical Advisor, Wes Tomson, have devised and tested a plan whereby the submunition is secured using a hook and line, coated with liquid foam and once the foam has hardened, raised it into TNT box filled with sand. Today, they are putting the plan to action. They successfully carry the device down the stairs, out of the apartment complex, and destroy it in HALO’s testing ground. “People think it’s no big deal,” says Mr. Bakhshian, “to just go around and blow things up. But in this job, if you don’t know what you’re doing, you won’t last. You’ll endanger yourself and others.” 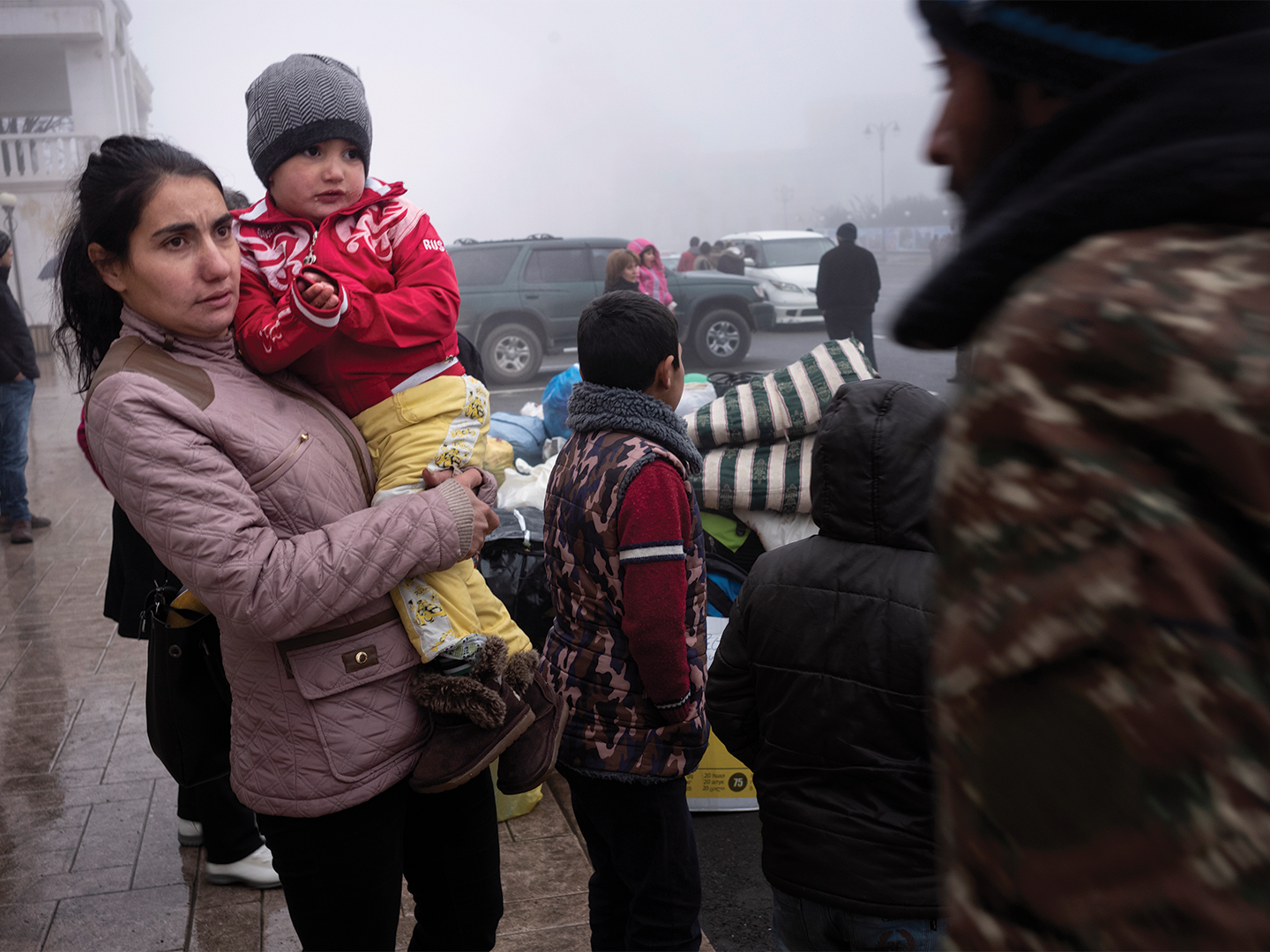 Narine Boghossyan holds her son, three and a half year old Armen Haroutunyan as they and her five other children wait in the freezing cold for a ride back to their home.
Image 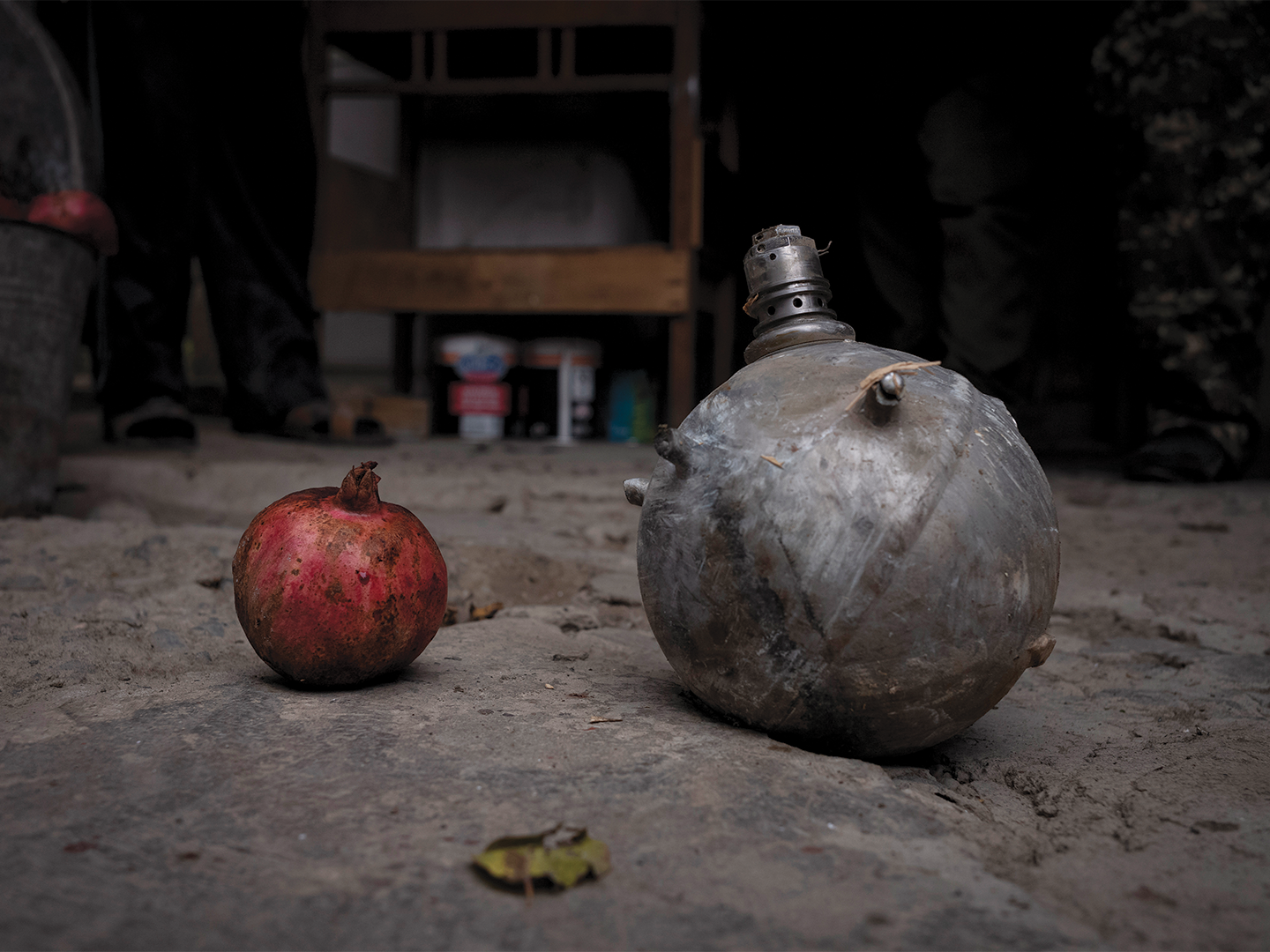 HALO staffer, noting this rocket part’s resemblance to one of the many pomegranates grown in Martakert.
Image 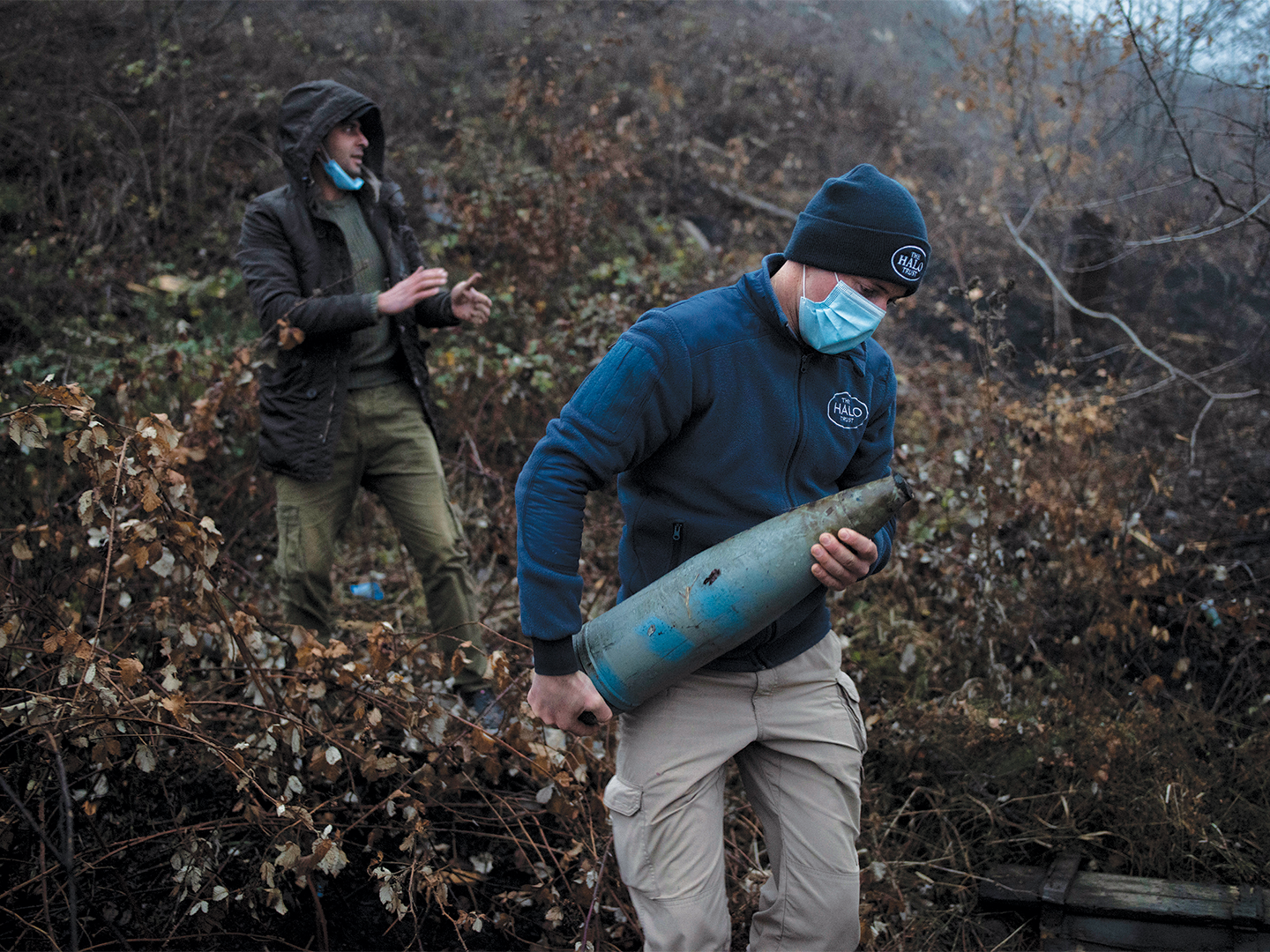 HALO Trust staff clear warheads from the side of the road on the way from Martakert back to Stepanakert.
× < >

Across town at Stepanakert’s School No. 2, classes resumed just weeks after the war ended. In their second week back, about 80% of students have returned, plus several new students whose families have been displaced. A HALO risk education team visits classrooms with posters and pamphlets that display different types of UXO, including some of the newer threats with which the children may not be familiar. In a third grade classroom, several hands shoot up in the air as students excitedly recall having seen the pink ribbons on their walk to school, at the park down the street, in a friend’s backyard.

Sadly, the need for this type of risk education is nothing new in Artsakh. It has been a part of the school curriculum for decades. In Karmir Shuka, a village in Martuni Province that saw some of the most intense fighting in the recent war, Mayor Narek Atayan recalls his childhood after the previous war: “I remember when the HALO Trust would come to our school,” he says. “Those were my favorite days because we would get a break from our regular studies and learn about something that actually affected us.” Mr. Atayan’s son is barely a year old. “He’s the same age I was during the first war,” he remarks. “What can I say? The cycle continues.”

On the second-story balcony of his house, Mr. Atayan nods toward the hills, not far away. “These are our positions,” he says, pointing to what looks like a row of navy blue tents, “and those [a little further] are theirs.” Only a few families have returned to Karmir Shuka so far, but according to Mr. Atayan, more will come. “They need to feel safe,” he says, then pauses as gunshots resound in the distance. “As long as that’s going on,” he resumes, “they won’t feel safe.”

Electricity, gas, and phone lines are still down in Karmir Shuka. It’s not clear which road is safe to take, whose house is on which side of the border. The streets are still mostly abandoned, but seven-year-old Gevorg Harutyunyan, who recently returned with his mother and five siblings, is spotted ducking into a neighbor’s yard. His mother, Narine, looks on. “When we came back, he saw what a state the neighbor’s homes were in,” she says. “Nobody had tended to them in months. So he’s been going yard to yard and cleaning up.” Pomegranates and persimmons rot on the trees and litter the ground alongside shattered glass, artillery shells and, undoubtedly, unexploded munitions. Clearing explosive contamination from residential areas like Karmir Shuka and providing residents with risk education are vital in ensuring the safe return of families like the Harutyunyans. 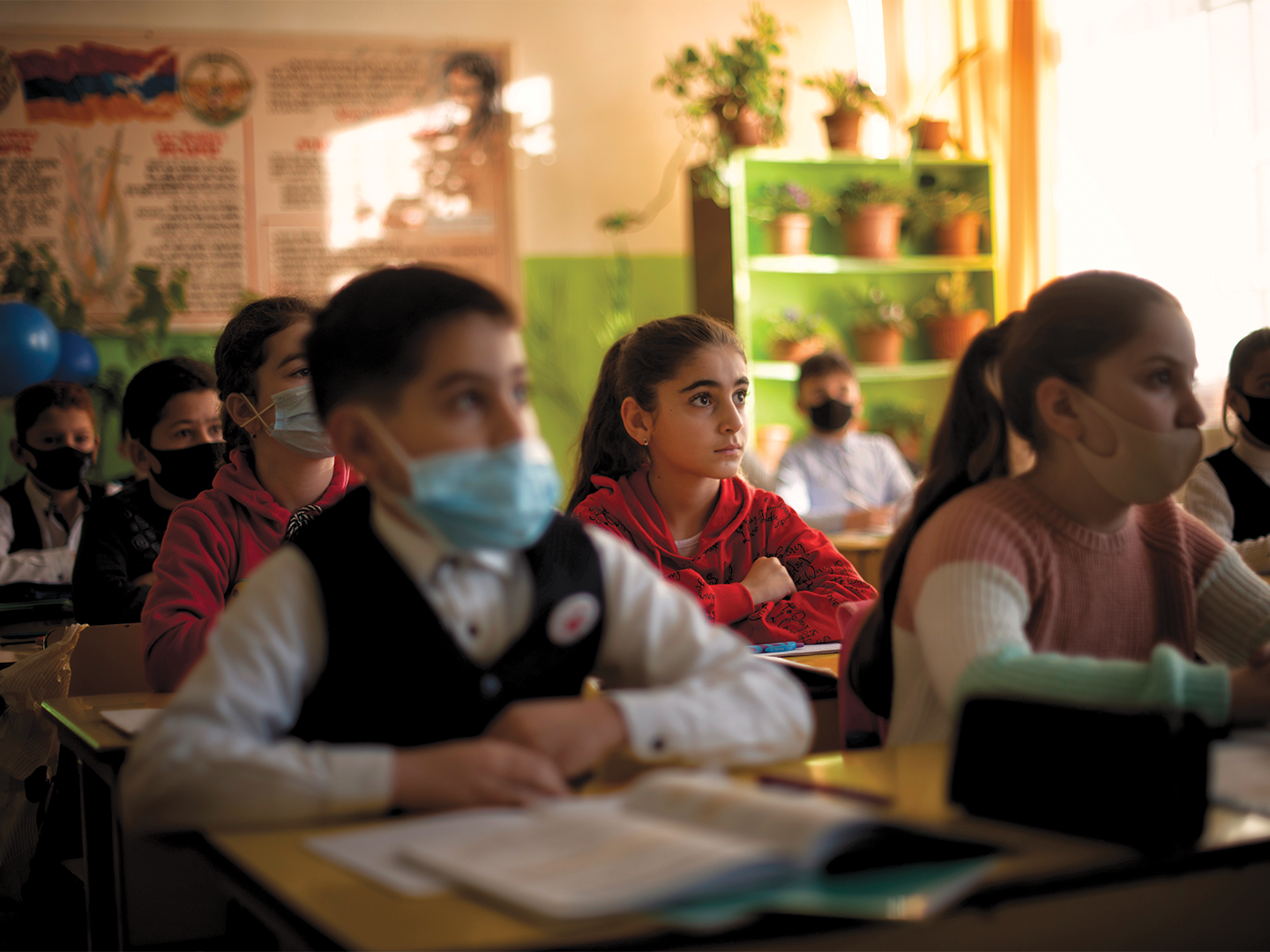 Children at Stepanakert School No. 2 get a visit from the HALO explosive ordnance risk education team during the first week back after the war.
Image 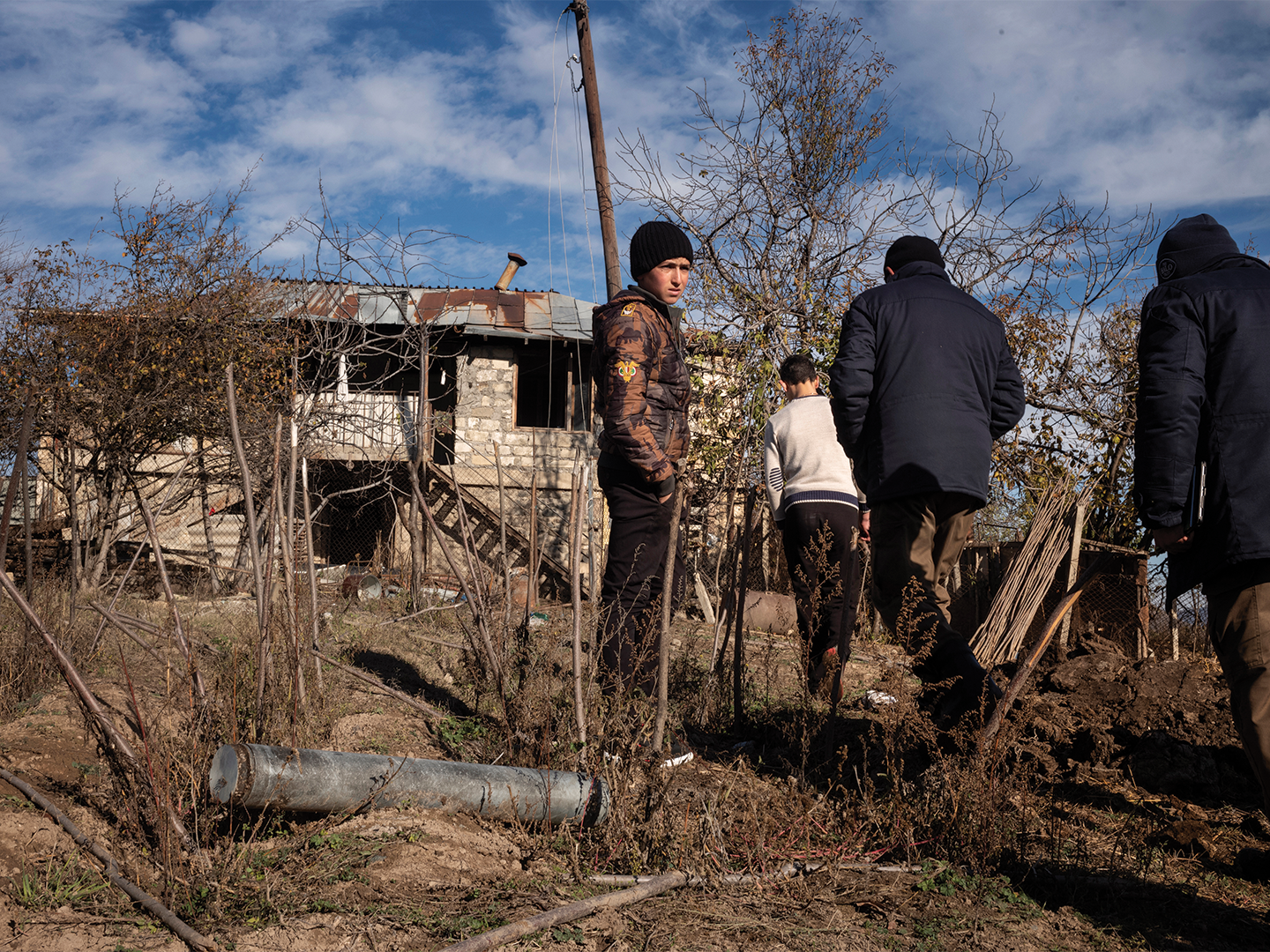 Fifteen-yearold Garnik Nasibyan, has been spending his days roaming around his neighborhood collecting bullets, fuses, and warheads.
Image 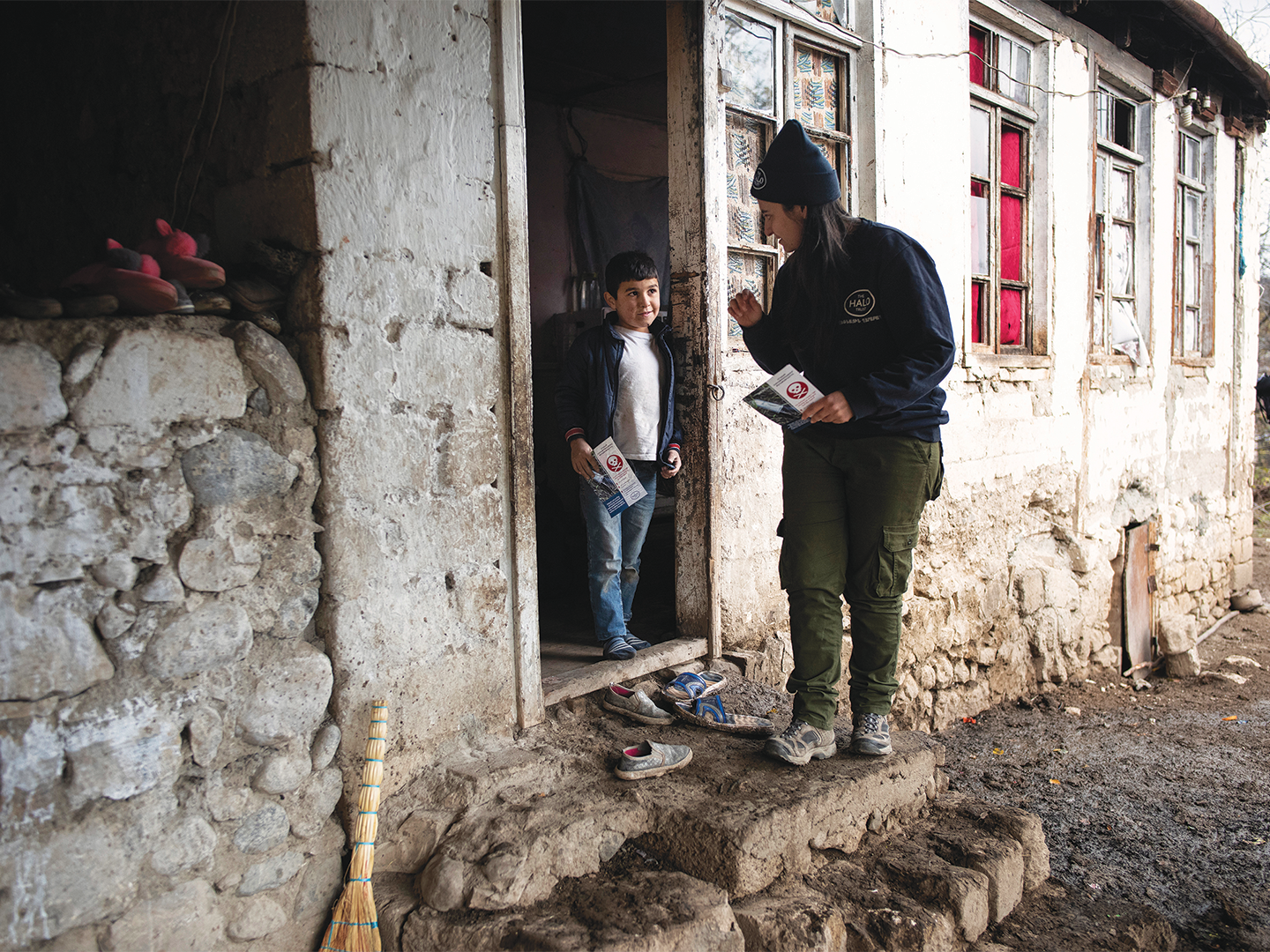 Seven year-old Gevorg Haroutunyan talks with a HALO staff member in front of the home, where he lives with his mother, Narine Poghosyan, and five other siblings.
× < >

One month of military engagements in defense of Artsakh
END_OF_DOCUMENT_TOKEN_TO_BE_REPLACED

The building blocks of an unbreakable bond
END_OF_DOCUMENT_TOKEN_TO_BE_REPLACED