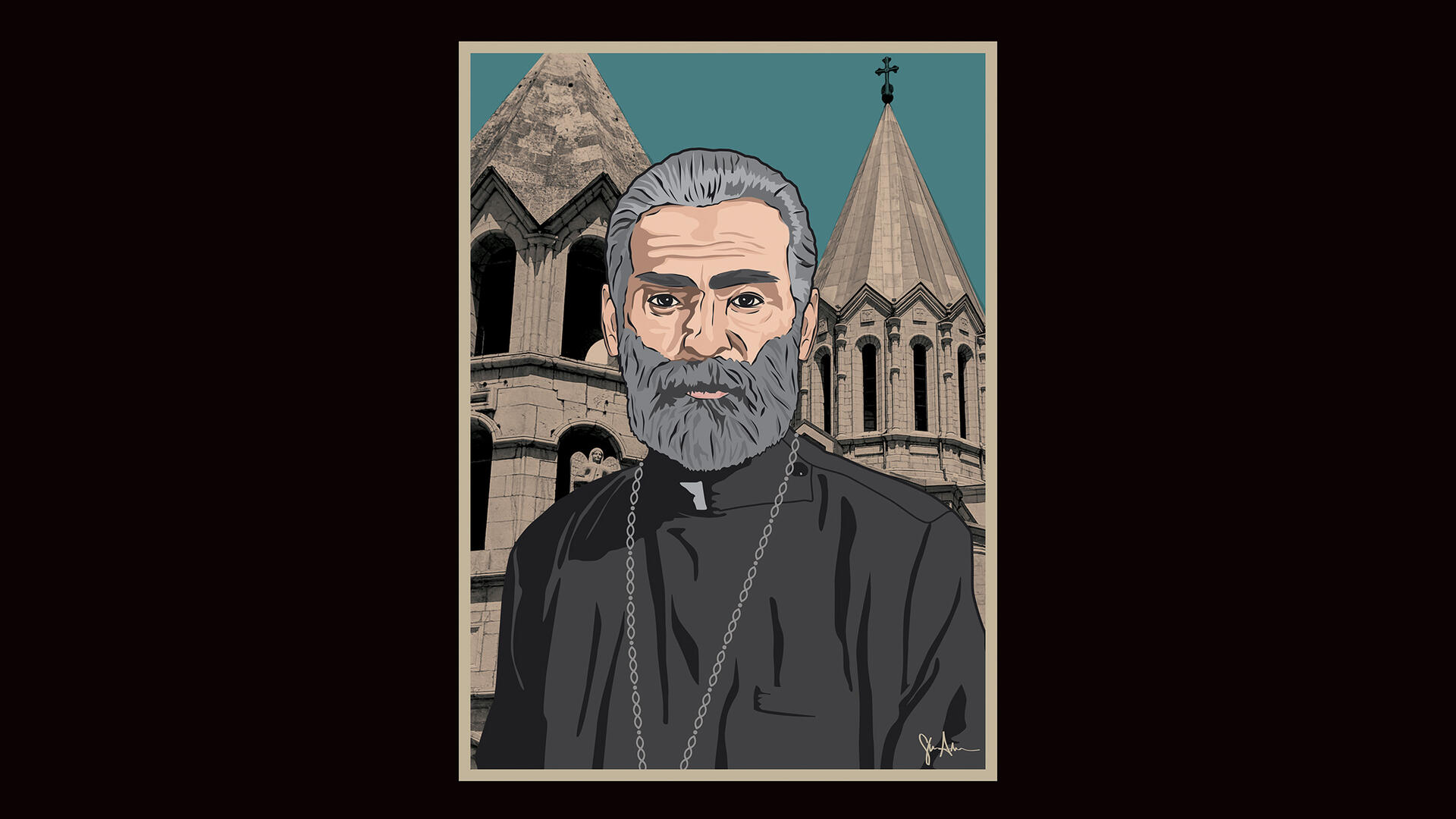 He is the rock of faith who, like so many of his fellow Armenian clergymen, bravely puts his own safety on the line to serve the spiritual needs of those willing to make the ultimate sacrifice for the land they cherish.

Like so many other times before over the past 30 years, Archbishop Barkev Martirosyan, the primate of Artsakh, can be found close to the combat zone, blessing or performing baptisms for Armenian defense troops as they steel themselves for battle, knowing the clear and present dangers before them.

His Eminence can also be found making the rounds of field clinics and hospitals, joining other Armenian priests, encouraged by His Holiness Karekin II, to bring the healing power of prayer to injured soldiers and civilians being prepped for or recovering from highly complicated surgeries.

In May 1992, when the troops were preparing to liberate Shushi—the then Bishop declared: “Here, in Artsakh, the fate, the present and future of the Armenian people is being forged. This is where our victorious odyssey begins, even if it must commence on a military path. We stand at the threshold of victories. This is what will change our fate and we will find the right path because we are becoming one with God. Victory is ours.”

Encouraging a military strategy to achieve peace is a paradox with which the Archbishop has come to terms, given that the Armenian Church has long had to serve a dual-role of both defender of national survival and a guide to eternal salvation.

When off the field of battle, Barkev Srpazan is likely to be found still standing proud amid the rubble of the city of Shushi’s great Ghazanchetsots (Holy Savior) Cathedral. Built in the 1800s, it recently took a significant hit in a new round of escalated hostilities perpetrated by Azeri forces.

Years earlier, Archbishop Martirosyan helped bring the monumental structure back to its original gleaming luster after the defacing bombardments during the first protracted war in the 1990s. This time, high tech weaponry exacted a gaping hole across a section of the cathedral ceiling, turning the hallowed space below into a wasteland of dust and debris.

Here, in Artsakh, the fate, the present and future of the Armenian people is being forged. This is where our victorious odyssey begins, even if it must commence on a military path. We stand at the threshold of victories. This is what will change our fate and we will find the right path because we are becoming one with God. Victory is ours.

True to form, the Primate did not miss a beat to take interviews with foreign media to shed light on this latest act of premeditated aggression, sending the enemy a clear message that the substantive damage would neither deter him nor his people from restoring the cathedral to its original glory. Of course, this would come after his first order of business, namely to awaken the world to the injustice inflicted upon innocent civilians and families, many sheltering within the Cathedral walls and other church basements and safe houses in the area. He appealed to the video camera for the world to care, after which he led a prayerful appeal to the Almighty to grant the Armenian nation peace with justice. The huddled families seeking refuge followed suit, imploring for Divine intervention. Apparently, Father Barkev has done well in his core mission to revive the inherent faith of a people who were prohibited from openly worshipping in Armenian Christian holy sites during the 70 years of Soviet rule.

It is this rock-solid resilience driven by an unshakable faith that makes His Eminence Barkev Martirosyan the icon of moral authority, a status that holds powerful sway on the modern Armenian psyche. He is a force of nature with a keen intellect, holding a Ph.D. in theology, with three books and numerous articles to his credit. Yet it should come as no surprise that he also holds a first-dan-ranked black belt in Shotokan karate, not to mention the honorary title conferred to him as a Hero of Artsakh.

In a recent interview, Father Barkev posited that, this time, the hostilities had a new dimension to it, calling the war a “competition of the regional powers” for dominance in the region.

Nevertheless, for the Artsakh Strong like Archbishop Martirosyan and his faithful flock, their eyes are peeled on winning the moral victory that will deliver their long-awaited peace.

One month of military engagements in defense of Artsakh
END_OF_DOCUMENT_TOKEN_TO_BE_REPLACED

The building blocks of an unbreakable bond
END_OF_DOCUMENT_TOKEN_TO_BE_REPLACED

In Artsakh, the threat of unexploded munitions lingers long after the war
END_OF_DOCUMENT_TOKEN_TO_BE_REPLACED