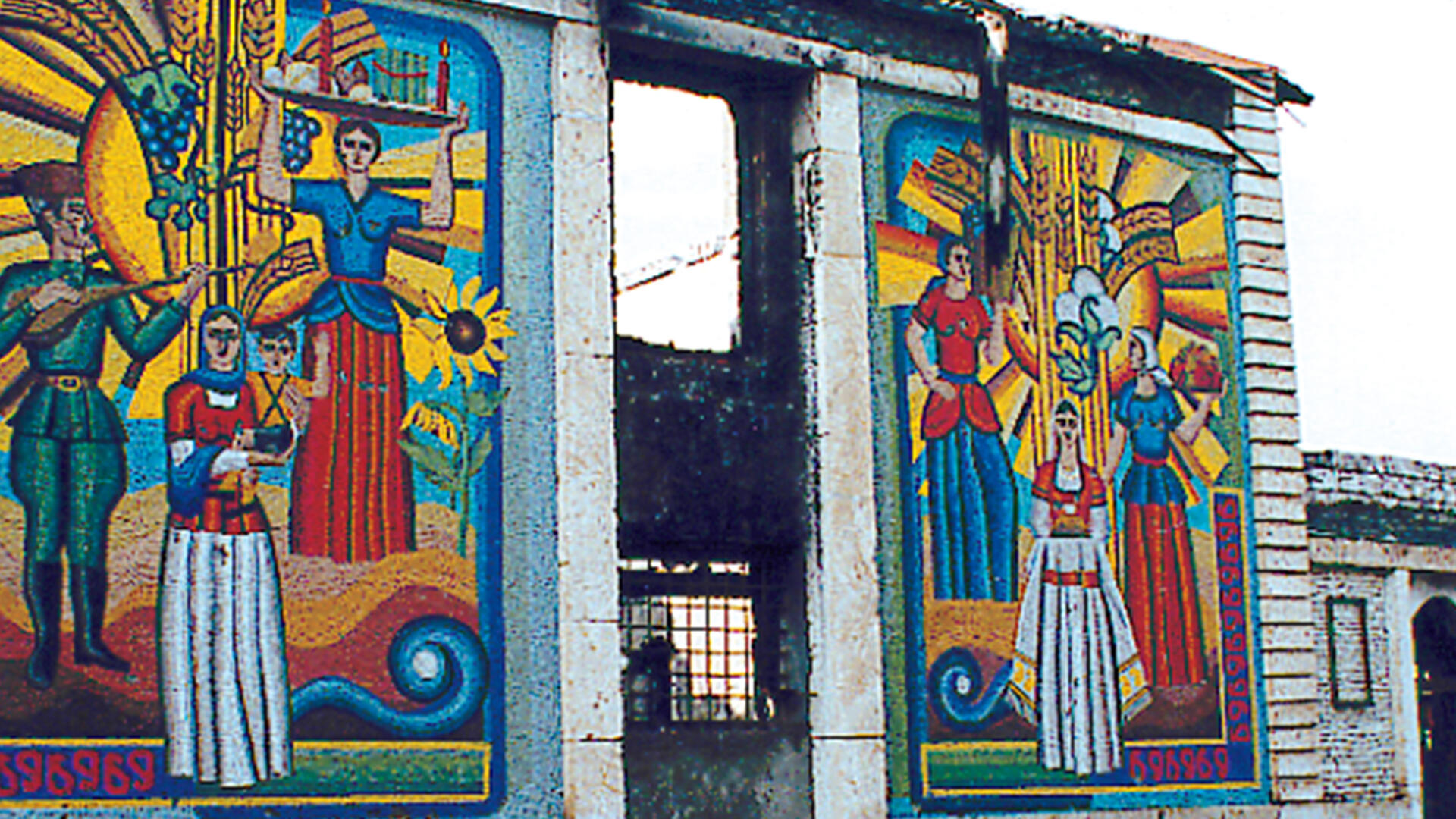 Government officials in Stepanakert often look in amazement as one arrives in the city, hungry, exhausted and dusty, after an arduous eight hour drive from Yerevan. “Eight hours? We do it in five!” Well, maybe if you have a four-wheel drive that can maneuver at break-neck speed over thousands of potholes from Yerevan to Goris and then on to the under-construction, winding, mountainous, dirt, rock-laden Lachin/Stepanakert road without losing a tire or cracking an axle, it is possible. But then Karabakhtsis have already proven they can withstand a lot more than a bumpy ride.

The pressure has been mounting in recent months. It is a new ballgame. For a population who fought and won under the worst odds simply to live freely and peacefully on their land, the prospect of possible trickle down oil riches is not particularly enticing.

In recent months U.S. State Department officials, OSCE (Organization for Security and Cooperation in Europe) representatives, Russians and oil company agents have journeyed to this land, expecting to convince the government and its people that substantial rewards will come their way just as soon as they settle. One independent agent arrived this year offering millions to upgrade industry, health or “whatever you want” if only a settlement could be reached. They all returned home empty-handed but I am sure each learned something about the Karabakhtsis.

My first trip to Karabakh was in March 1989 when Arkady Volsky (today head of a powerful Moscow industrial consortium) was sent by Gorbachev to quell the protests and to find some way of placating the population. It was still dangerous to visit nearby towns like Shushi. The Soviet Army was stationed throughout the region.

There were few people in the streets, as if everyone were hidden away quietly waiting to see what would happen next. It was a time when each and every Karabkhtsi was careful never to fire a gun or hunt lest the Azeris or Russians have an excuse to attack or imprison Armenians. (The wildlife has since doubled in the area because of this two year hiatus.)

The atmosphere during our tour was depressing and at the same time invigorating. Volsky, seemingly sincere and with the best of intentions, recited to our visiting delegation all the projects he expected to implement: upgrading industry, building a new hotel, finding markets for local products, even processing gold. I was disturbed by how the local Armenian officials of that period were hanging on to his every word, hoping against hope that it would all come true.

It was still the time when the phrase “Hartzeh beedee loodzvy” (The problem will be solved) was continually expressed. Certainly I could not believe that the Azeris would ever allow such change and progress after years and years of isolating and humiliating the Armenians of Karabakh.

During the discussion I rather meekly questioned Volsky about the reality of his plans. When we left I was sternly reprimanded by an accompanying Karabakh activist living in Yerevan, “How could you insult Volsky like that.” (Volsky didn’t even seem to notice) It left an impact on me that I have not forgotten to this day.

In retrospect I realized it wasn’t because it was of any consequence but because it was totally irrelevant. I was too naive to understand that the Soviet Union could eventually collapse, that other activists could already be planning for liberation or that the Armenians could wage a war and win. After all I was a first generation American-Armenian still steeped in the history, loss and sorrow of a genocide.

On the second day of the trip I was even more confused when, driving through Stepanakert, small children would raise their arms with closed fists, the sign of “Miatsoom” (unity), unfazed by the presence of nearby Soviet soldiers, or by the hundreds of workers at the microchip factory who ignored their Russian bosses, leaving their jobs to greet us, once again with raised arms signaling “victory.” What was going to happen to these people?

Anyone touring Karabakh today cannot imagine those years of subjugation. Under Baku, the forced silence of Armenians was deafening. I remember one couple telling me they thought their only form of chic entertainment was getting dressed up and going to an Azeri “Tea Café” in Agdam, a nearby town outside of Karabakh that was almost a “free zone” stocked with goods unavailable anywhere else in the region. “We were so brainwashed in those days” they added. It’s even more unimaginable that a 150,000 Armenians some 50 to 70 miles away from Armenia could not cross the border without permission.

Since the cease-fire the government officials of Karabakh have made a concerted effort to raise the morale and living standards of its population after the traumatic 70 years of Baku rule, three years of protests and three years of a devastating war. Salaries and pensions are paid on time, private business is encouraged whether it be in agriculture, trade or industry, joyous cultural events are continuously presented and television programs are purposely upbeat.

Today Armenian newspapers are published, Armenian TV programs aired, Armenian dance and drama groups established and the 17,000 seat stadium is filled to capacity every week with performances, all of which were banned for over 60 years (Karabakh sport teams are not allowed to compete as a country in CIS or international games). 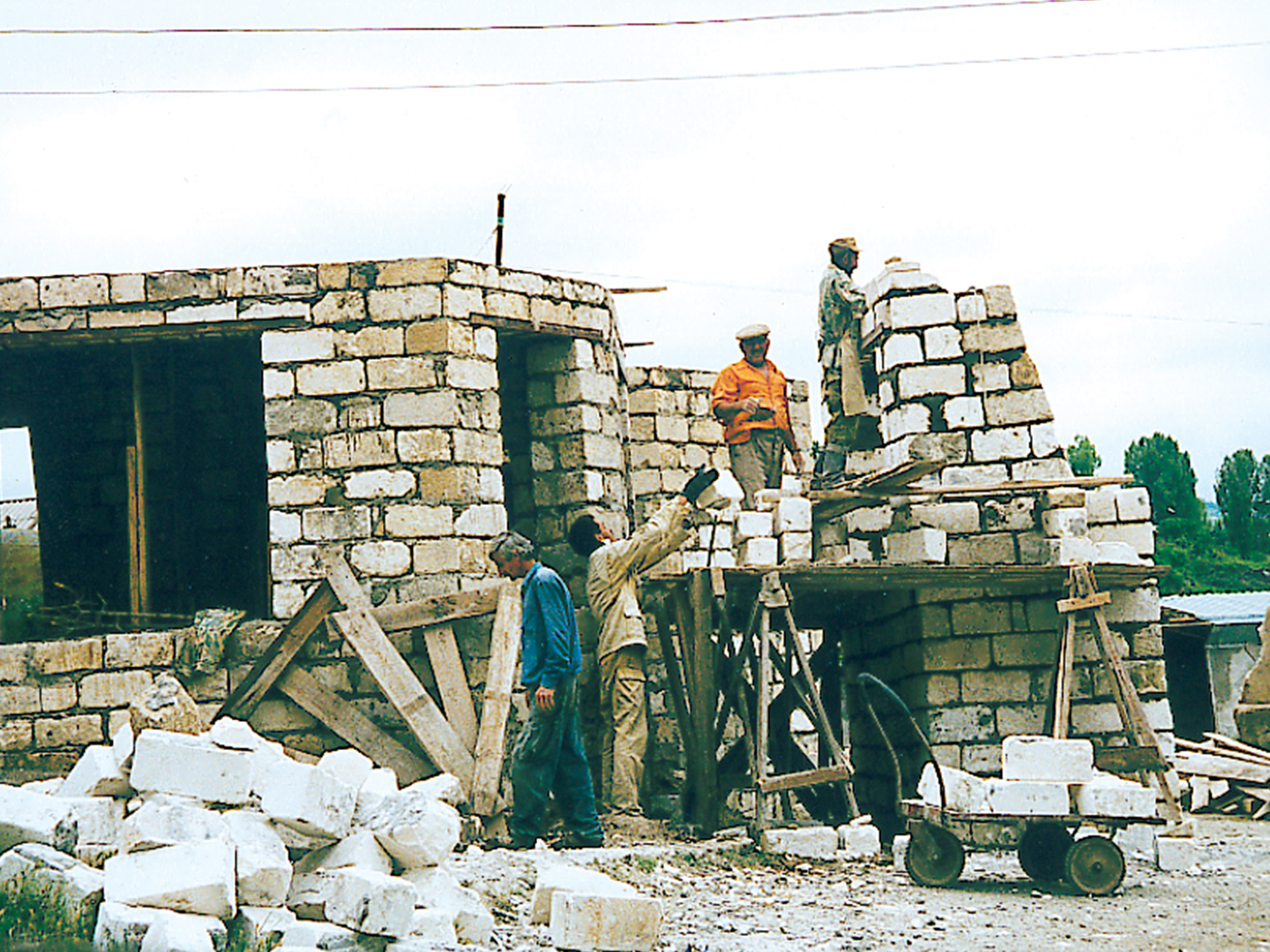 Touring Karabakh just before the cease-fire I wondered how Stepanakert and all the villages could ever be revived. Once again I should have known better. Hundreds of bombed and shelled offices, apartment buildings and village homes have been repaired, tens of thousands of shattered window panes have been replaced (by 1993 almost every window in Stepanakert had only plastic wrapping to keep out the cold and rain), streets have been repaired, parks planted with grass and flowers, attractive street lights installed, water and telephone lines connected, airport runways repaved and extended to accommodate cargo planes and jets and small ten and twenty room hotels built for visitors.

While industry is near collapse, the first-ever in Karabakh flour processing plant has just opened, capable of handling 80 tons a day on two shifts. With easy access to Armenia, trade is becoming a major source of income. Even merchants from Iran now buy and sell in Karabakh as their trucks ply the difficult Lachin mountain roads daily.

The Lachin corridor and the South-western part of Karabakh connecting to Armenia, once totally Azeri inhabited, was a 70 kilometer no man’s land for Armenians. In the past two years Armenians have been encouraged to settle in the region with promises of cash and livestock to get started.

The first months it was amazing to see a handful of people relocating without running water, electricity, schools or medical services. There was hardly a building left undemolished from the war. Even transportation was at a minimum—new settlers often walking 20 or 30 miles to reach the nearest inhabited town in Armenia or Karabakh. One could only wonder if these people were so desperate, with no other alternative in their lives, that they would settle in this forsaken area.

What a difference a year can make. It is a beautiful mountainous, lush, green peaceful area, almost resort-like. Some 7,000 Armenians now live in the region, busy renovating their homes, opening schools, clinics and even a church. In July, a few new shops, gas stations and restaurants, especially for travelers, were under construction. Every now and then a satellite dish looms high on a rooftop of a newly renovated home.

When the Lachin road construction, sponsored by the All-Armenia Fund, is completed, the two and half hour drive will be cut in half. No doubt with services expanding, thousands more will soon find Lachin and all its villages an attractive place to live.

There is hardly a person in Karabakh who has not lost a loved one in the war but after all the suffering and death if you ask if they’d ever go back to the way things were, they’ll look you straight in the eyes and quietly say “Never.”

One month of military engagements in defense of Artsakh
END_OF_DOCUMENT_TOKEN_TO_BE_REPLACED

The building blocks of an unbreakable bond
END_OF_DOCUMENT_TOKEN_TO_BE_REPLACED

In Artsakh, the threat of unexploded munitions lingers long after the war
END_OF_DOCUMENT_TOKEN_TO_BE_REPLACED