“Why don’t we consider the peacock?,” the fresh faced 21-year old Vasken Kalayjian earnestly asked his superiors at NBC. Heads turned to the newest member of the marketing team, with barely a year behind him at the oldest of the three major networks of the pre-cable era that monopolized the hearts and minds of America. Yet Kalayjian’s humble suggestion triggered the launch of one of the most long-lived and iconic brand identities in American television history.

The year was 1979 and NBC was in the midst of a branding crisis. Having introduced a logo that few viewers connected with and industry-insiders ridiculed just a few years earlier, management was rethinking its corporate identity. Enter Vasken Kalayjian.

Recruited for his design expertise, Kalayjian had just completed a communications degree at Pratt Institute, among the most respected art schools in the country. “I was laying the foundation of my education with courses covering color theory, architecture, and interior design when, all of a sudden, I discovered the emerging field of communications,” he recalled. “For the first time, I was diving into advertising, marketing, graphic design, and public relations—and I was fascinated by this marriage of art, psychology, and business.”

As he studied, Kalayjian seized every opportunity to develop his marketing proficiency and versatility, in a time before branding and marketing were popularized concepts. From working at an architectural firm that was building up Dubai from the desert to experimenting with messaging for the well-established Bloomingdale’s department store, he was reasonably proficient in the intricacies of corporate identity by the time he joined NBC.

The iconic NBC peacock was developed as a functional element of the company’s programming. Vibrantly hued, the bird was originally designed to sell color TV sets, emphasizing the shift from black-and-white screens. “When I read the market research commissioned by NBC to solve this problem they were having,” Kalayjian explains, “I realized that the public already identified the solution.” The bird was the brand and, soon enough, NBC embraced this, as it did Kalayjian.

For the five years that he worked for NBC as manager in its network advertising and promotion department, Kalayjian was at the heart of branding some of the most beloved and renowned programs, both domestic and international. From the Olympics to Live Aid, Cheers to The Tonight Show Starring Johnny Carson, Saturday Night Live to Shōgun, he had a hand in developing the look, feel, and marketing strategy of each. Not only did he work on packaging televised content, he was an integral part of branding facilities and operations, which were applied to hundreds of NBC’s offices and studios, from 30 Rock in New York to across Los Angeles.

Few would imagine defining All-American branding for one of the Big Three national television networks was driven by someone who had lived in the United States for less than a decade.

Kalayjian was born the youngest of five in Aleppo, Syria. The son of a pragmatic father and a spiritual mother, he was raised in a large Armenian family with no lack of role models. “While my mother instilled in us our values and ethics, placing importance on our higher education and spiritual development, my father wanted us to be skilled in labor, convincing us that we could master any trade if we tried hard enough,” Kalayjian explains. A survivor of the Armenian Genocide, his father valued hard work more than most and by the time Kalayjian was 14, he had had three apprenticeships with master craftsmen: learning shoemaking at age eight; goldsmithing at age 10; and setting diamonds by his teens. In all endeavors, excellence was expected from the Kalayjian children.

“‘Whatever you decide to do, make sure you do it so well, it becomes an art form,’ my father would say,” Kalayjian recalls. Growing up in Aleppo, he took the direction to heart, especially as he became more interested and invested in art it-self. Attending the AGBU School gave Kalayjian access to the AGBU Mardiros Sarian Academy of Fine Arts, in which he discovered his own artistic talent. There, he would also meet two more mentors that would shift the trajectory of his life, imparting perspectives he would take with him to Fort Lee, New Jersey, when he emigrated in 1971.

“Miss Arsine Zorian and Dr. Robert Jebedjian ran the AGBU art ateliers of the academy and both of them defined art and artists for me,” Kalayjian says. Zorian was an independent avant-garde artist, a self-made working woman, who nurtured the young artist’s rebellious, liberated spirit in his work. Jebedjian was a renowned ophthalmologic surgeon and also an accomplished painter who showed him how art can be married to any profession. By the time he left Syria, Kalayjian understood that his own aptitude for art could keep him grounded through any transition.

His first years in the United States were not always easy. Not knowing any English was difficult at first, but soon, Kalayjian became known in high school for his art—a reputation that would help him make friends among his peers.

Today, still finding solace and expression in painting, he cannot remember a time when he was not making art. “My painting allows me to forge the mostcreative and impactful path ahead,” he explains. “It frees me from any constraints and allows me to find the joy that I then invest in my professional work.”

Whatever you decide to do, make sure you do it so well, it becomes an art form.

Where Zorian and Jebedjian left off in Syria, his new American art teacher, Miss Joan DiTieri, picked up. She shepherded Kalayjian through the college application process, isolating the top five art schools in the country at the time. He was accepted to all five but decided on Pratt Institute, so he could pursue his many artistic interests and begin building his career.

While at NBC, Kalayjian connected with a colleague to establish their own global strategic branding agency, Glazer+Kalayjian. Launched in 1980, G+K prevailed as a robust, full-service communications design company for more than two decades, working with global corporations like Panasonic, Unilever, Shell, Chase Bank, Coca-Cola, Visa, and Pfizer. As the chief creative director, Kalayjian ventured from the realm of entertainment companies and navigated through each new industry as though it was a new country. “We expanded our portfolio to include financial institutions, retail corporations, and technology giants,” he explains. “By never standing still, by being so versatile, we were incapable of being pigeonholed.”

It is this flexibility and adventurous spirit that have remained the hallmarks of Kalayjian’s success through countless contracts, companies, and clients. “I am always in search of the miraculous,” he admits, when reflecting on what has motivated him to take on new projects and be fearless in the face of uncertainty. Since G+K, Kalayjian has co-founded four more startup companies. As he welcomes the advancing technological age, immersing himself in the different cultures each company projects, Kalayjian is forever intrigued by novelty, impermanence, and the prospect of progress. “Suddenly the world is smaller thanks to the new technologies that are at our fingertips and allow us to travel in so many dimensions so quickly and efficiently,” he marvels. “There are endless possibilities out there and I am open to them all.” 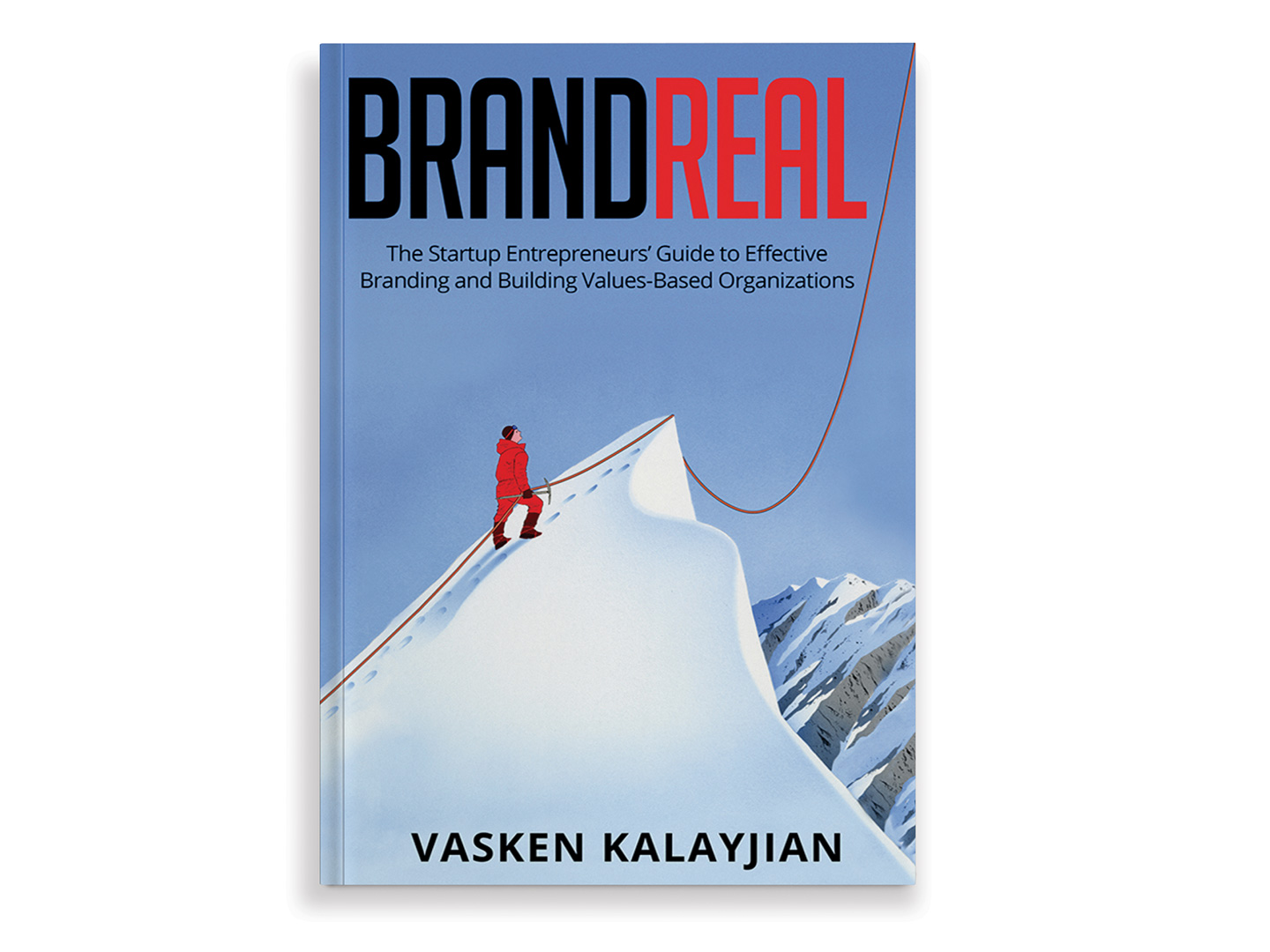 Kalayjian attributes this social flexibility and emotional intelligence to the circumstances of his birth. “This is what being Armenian means to me,” he adds. “I hold many cultures within and love to build bridges with others.” Before Kalayjian left the wisdom that his native Aleppo imparted unto him: how to be mutable; to code-switch; to be flexible enough to be effective yet principled enough to maintain personal integrity. His diverse professional portfolio and extensive roster of major global brands are a testament to how art and business can conjoin in perfect harmony to impact the masses. Yet finding the time to pursue a parallel track as a fine artist has allowed him to nurture and express his inner life, replenishing his creative spirit to meet the next creative challenge.

In 2018, the award-winning Kalayjian decided to share his professional success in a definitive way. He compiled four decades worth of his accumulated knowledge and published Brand Real: The Startup Entrepreneurs’ Guide to Effective Branding and Building Values-Based Organizations. Brimming with insights and practical tools, the handbook distills Kalayjian’s experience to emphasize his two guiding principles: nurturing emotional intelligence and standing for your values. “I wrote this book hoping to provide tools to the next generation of entrepreneurs, to eradicate the fear of a future we do not understand,” he explains. “In an ever-changing world, we need the confidence to imagine that future and believe in our capacity to create it. To remain relevant and be successful, the most important skill is to continuously welcome opportunities to learn.”

Forever embarking on new projects and taking on new industries, Kalayjian looks forward, welcoming the unknown and urging others to do the same.

Nathalie Piranian reflects on her involvement through the years
END_OF_DOCUMENT_TOKEN_TO_BE_REPLACED