Deep into the planning of the 25th anniversary of the fabled downtown New York art gallery she founded with her husband John, Kristine Woodward (nee Kazandjian) had much to celebrate. Along with selling the works of such contemporary luminaries as Robert Indiana and Andy Warhol, reviving the career of prolific painter Roy Newell, and nurturing the raw genius of Richard Hambleton, the Woodwards can be credited with promoting dozens of emerging new artists, including Cristina Vergano, Brad Robson, Margaret Morrison, Susan Breen, and many others. Reason enough why Woodward Gallery is synonymous with the community-centric, mission-driven public art that defines their neighborhood and adds to the vibrancy of the greater New York City art scene.

But true to the Woodwards’ non-traditional style, the celebration was also the opening of yet another Woodward Gallery location, further downtown in New York’s southernmost neighborhood, Tribeca. Woodward, who laughs easily, was amused by the notion that the Woodwards might have an aversion to anything above 14th Street, but as she traced the couple’s unconventional fortunes as gallerists in the contemporary art world, she acknowledged how easily one might get that idea.

“By the early 1990s, John and I had outgrown our starter gallery, selling paintings out of my tiny apartment,” she says, explaining the need for their first official outpost. “It was natural to look downtown to Soho, the neighborhood synonymous with adventurous art.” After a brief stint just to the east on Lafayette Street, the Woodwards found raw space at 476 Broome St., in the bustling heart of the area, nestled among working artists’ studios and large galleries. But after 13 successful years there, it was impossible not to notice the area’s artistic soul had been somewhat dulled, covered over by the shiny veneer of the commercial success that had transformed it.

“Major fashion retailers had opened flagship stores there. People were no longer coming to Soho to discover art, but to sightsee, shop, and furnish their lifestyles. Decorators would come in to the gallery, saying ‘I need a large horizontal painting with red tones for a wall behind a sofa, and three drawings with muted blues and greys for an entry foyer,” recalls Woodward. “We knew it was time to go elsewhere.”

Their neighboring galleries were also decamping, many heading uptown to Chelsea. But the Woodwards felt the large, austere spaces in tony Chelsea were not, as Kristine puts it, “our cup of tea.”

“John and I really wanted folks to experience our gallery as an extension of our living room,” she explained with characteristic warmth. “We always want our patrons to feel very comfortable asking us questions and talking to us about the arts. We see our gallery almost in the tradition of an art salon, a place to interact and explore ideas.”

The ever-intrepid Woodwards turned their search southeast, to the Lower East Side. Very much like Soho had been in the 1970s, the area, while still rugged, was percolating with street culture.

“Beginning in the ‘80s, the Lower East Side had become a hub for expression in all forms—arts, dance, music, fashion, all of it,” says Woodward. “As we considered our next move, we found a run-down building on Eldridge St. The area was still very rough, to put it mildly. But we rolled up our sleeves, determined to transform it into a gallery.” 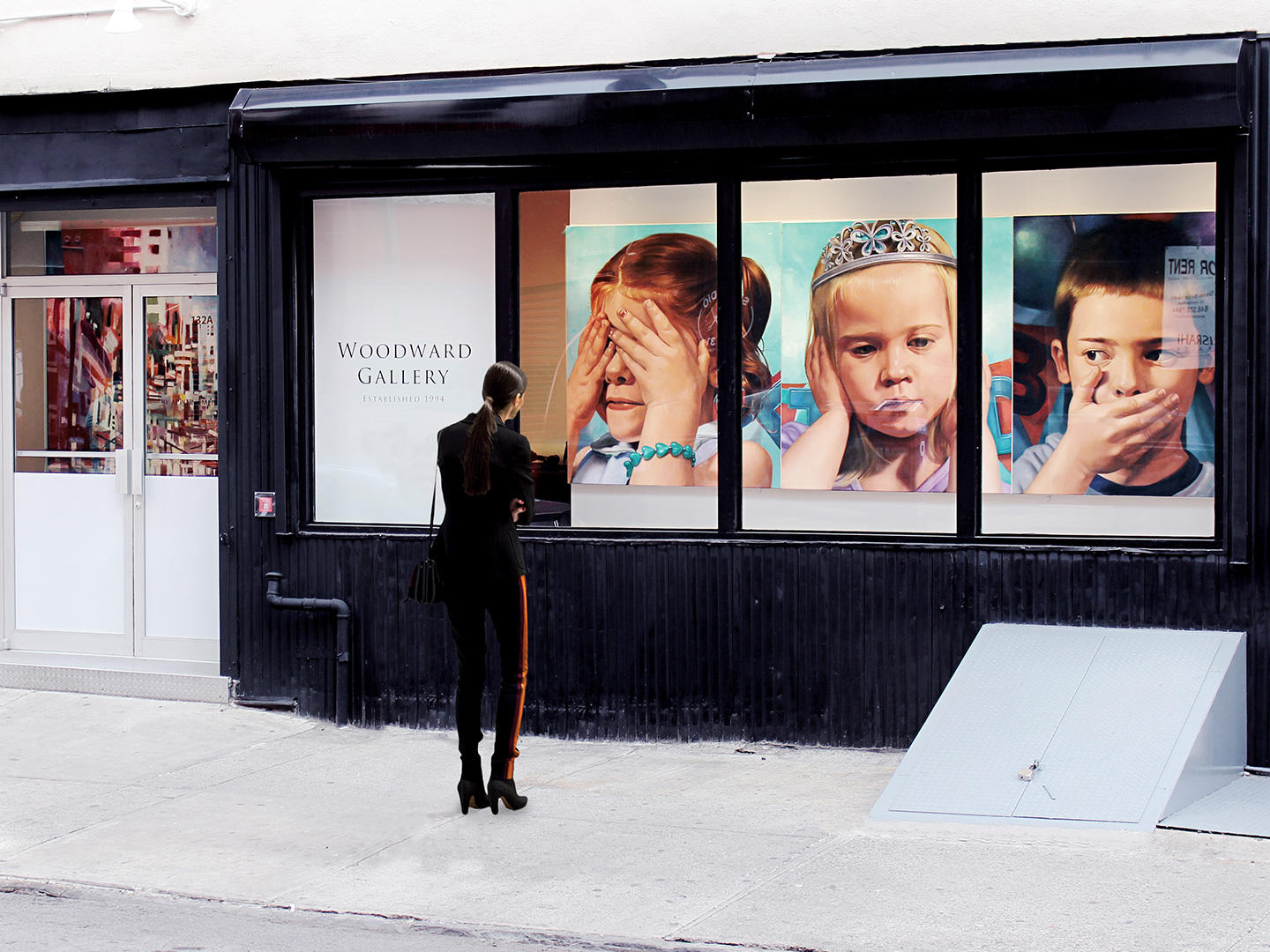 And, to fulfill their desire to invite inquiry and dialogue, the Woodwards did not stop there. They also took the space across the street from the gallery, got a liquor license, and invented what Woodward describes as “an art bar for street artists, who were given permitted space on which to paint large-scale murals on the exterior walls.” Soon, the second outpost with the moniker GHOST Art Bar and Lounge had blossomed into a neighborhood haven; an urban art colony deep into the far reaches of the city.

“It was crazy,” Woodward remembers, “I was entertaining constantly. I would be an art dealer by day, and in the evening, a bar proprie-tor. The gallery was a large, bright-and-clean, museum-like space and soon people would just stroll in, mothers with baby carriages, and hang out.” The art lounge GHOST was the place to relax, reflect on art, and enjoy a craft cocktail.

Together, the spaces on Eldridge Street became, in Woodward’s words, “a Lower East Side beacon. We literally had 1,000 visitors a week.”

This inclination to nurture those in their community stems from values shared by both husband and wife. John Woodward was a former chef who rose to be chief saucier at the posh Four Seasons restaurant in New York, catering to the exacting standards of the New York arbiters of taste.

Kristine grew up in a busy household in Islip, Long Island, daughter of an accountant father, and a mother who transitioned from decades of teaching high-school English to becoming the calming voice of the local community hotline.

Her summers at AGBU Camp Nubar gave her a respite from mundane suburban life, offering unrestrained physical explorations. As Woodward put it, Camp Nubar presented “the joy in just being able to do whatever I wanted in this outdoor setting.” She noted how, as a youngster, she especially loved the physical activities that gave her energetic spirit an outlet. Decades later, her affiliation with AGBU led to her being invited to serve as moderator and panelist on “The Art of Business” discussion with featured speakers from the Metropolitan Museum of Art, Sotheby’s, and Paddle 8 in 2014.

Woodward also knew, from an early age, that she wanted to help others. “My goal in life was to make people happy,” she says matter-of-factly. She studied nursing at Beth Israel Hospital and became a board-certified critical care nurse at the Surgical Intensive Care Unit there.

The Woodwards met when they were very young; John had a trained eye and helped direct his future wife toward a visual appreciation of the arts.

“When we met, the two of us just hopped around town, and John would literally point out the artists doing work on the street,” recalls Woodward. “I traveled with him to an international conference in the arts, which deepened my enthusiasm for what we saw. I didn’t have the language to express it yet, but what I lacked in training, I made up for in passion.”

Inspired by that conference, and despite being total novices, they decided to open a gallery. They knew it was risky, but also felt propelled by a deeper purpose.

“Neither of us had a business background. We just had a moral desire to represent artists in a very holistic way. We wanted to show art to consumers, but we wanted to support the artist and not get involved in the fray of the art business,” Woodward explains. “We stuck to that throughout our history as gallerists.”

From the outset, the Woodwards focused on the art that had the most impact on them and that could be seen by as many people as possible: public street art. The story of late 20th century New York public art is marked by familiar names like Jean-Michel Basquiat and Keith Haring. The Woodwards became known for reviving and fostering the career of Canadian street artist Richard Hambleton. Hambleton is known for his darkly enigmatic street work and includes what’s known as the “Murder” series, in which he staged disconcertingly realistic painted chalk-outlines splashed with red blood throughout the streets of lower Manhattan, and in other cities. He became best known for his storied and highly influential “Shadowman” series, with ominous life-size human figures painted in unexpected public locations, inspiring today’s best-known public artists, most notably Banksy.

The Woodwards’ relationship with artists has always extended beyond the transactional. They developed a personal, stewardship-level relationship with Hambleton over the course of many decades, with John known to cook his favorite meals and Kristine nursing the artist through his many illnesses, all the way to the end of his life.

Equally important to the Woodwards showcasing artists in galleries, was their desire to bring art to unexpected locations. For decades, the Woodwards actively promoted the visibility of art in public places, whether in their own spaces or pop-up shows in Gourmet Garage markets throughout the city. They are longtime supporters of bringing arts to public schools, and in the downtown devastation that effectively shuttered lower Manhattan following the Sept. 11 attacks, the Woodwards responded in a way that resonated for their community.

“Downtown NYC was essentially closed to tourism, motor and foot traffic. Instead of just temporarily shutting down, we worked in partnership with the City of New York and Dr. Sean Ahearn of Hunter College. We developed the Charting Ground Zero exhibition. It
was art meets history, statistics, and info-graphic technology. It focused on the rescue efforts with maps printed on canvas, holograms of Ground Zero, and computer-illustrations of the before-and-after footprint of the area,“ explains Woodward. “We updated the exhibit in 2011 to mark the ten-year anniversary of the event, and it retained its visceral impact.” After the exhibition had traveled the country, the Woodwards donated it to the 9/11 National Memorial Museum for their permanent collection.

We always want our patrons to feel very comfortable asking questions and talking to us about art. We see our gallery in the tradition of an art salon, a welcoming forum in which to interact and explore new ideas.

Technology and its power to both amplify messages and broaden audiences has long been embraced by the couple. They have switched access to their gallery to be by appointment, due in part to the proliferation of art auction and sale platforms such as Artsy and social media platforms, which enable collectors to view and purchase art from anywhere in the world. “This technology benefits artists, giving them larger exposure,” says Woodward. “And, provided they’re very careful about provenance and know whom they’re dealing with, it opens a much larger world to collectors.”

“It’s definitely a global market now. We don’t just talk to people from New York strolling on the Lower East Side. Now we talk to people from Switzerland or the UK or Uruguay.” Woodward adds, “It’s a huge change to the art world, and we’ve never been afraid of change.”

From that small apartment to spacious galleries, Kristine and John Woodward have built their careers trusting in their instincts, and most importantly, their shared values of heart over commerce.

“It wasn’t always easy; people always questioned why we did what we did—for example, building a gallery in an area that wasn’t yet burgeoning,” reflects Kristine. “I guess we didn’t always buy into what was expected. But John and I always bend over backwards to do the right thing.”

“Wherever we went, we opened our doors so people could feel welcome, and offered art for art’s sake. Our artists became our extended family, and so did our neighbors,” muses Woodward as she turns her attention back to the Tribeca location opening, just a week away, “It may be out of the norm, but this is what we do. We always find those kindred spirits, and it makes us happy.”

Nathalie Piranian reflects on her involvement through the years
END_OF_DOCUMENT_TOKEN_TO_BE_REPLACED