I am a hardworking man and want to be able to provide for my wife and kids without relying on handouts. I am grateful to AGBU for helping me get back on my feet and facilitating my return to the workplace. It’s a good feeling.

The vintage floor tiles at the entrance of Garo Boyadjian’s first-floor apartment are striking. “This is nothing compared to what we have inside,” he says. Indeed, the 48-year-old father of two is not wrong; authentic tiles from the 1950s grace the floors in every room of the old-fashioned two-bedroom home, which is located just off the main thoroughfare of Bourj Hammoud, a neighborhood known for its large Armenian population.

However, it’s not long before Boyadjian’s facial expression changes. He confesses that the property does not belong to him and his wife, Roupina. “It’s old rent. We are worried that the landlord might ask us to leave at any time. There’s a great deal of uncertainty,” he says, his voice tinged with genuine concern.

Nine-year-old David and six-year-old Daniel, Boyadjian’s two sons, are sitting quietly with their electronic devices, while the family’s two beagles are playfully chasing one another in the living room. Although material comforts are frighteningly few, everything appears rather normal; that is until Boyadjian references two large photographs taking pride of place on the main wall. “The picture at the top is of our firstborn, Harout. He was aged two years and nine months when he died of meningitis. Losing a child is the worst kind of pain,” he says.

Boyadjian then talks about the handsome man whose portrait is hung underneath. “He was Roupina’s brother. He passed away from coronavirus a few months ago.”

Beyond family tragedies, Boyadjian has faced severe financial hardships. He talks about working at the Port of Beirut for 13 years before being forced out for trying to secure a better package. “I was due to get married and asked my boss for certain benefits that I was entitled to. He was furious and made life extremely difficult for me thereafter. I was given no other choice than to resign. It was a hard decision; I had worked there for so long,” he explains.

Boyadjian’s journey then led him to a taxi firm, where he was employed as a driver before being promoted to supervisor. Although the company was performing well, the widespread anti-government protests caused a massive slump in client requests and ultimately led to the closure of the business. “The uprising dealt us a heavy blow. Roads were closed for weeks on end as protesters took to the streets, so we couldn’t operate properly. In parallel, the economy began to spiral out of control; setting fares became virtually impossible because of the fluctuating exchange rate. Eventually, business dried up, and we all lost our jobs.”

Unemployment ensued for two years, which left Boyadjian feeling helpless, hopeless and incompetent as a father. “I had a young family but was unable to secure an income. Those were horrible days. I was ready to do anything; I just wanted to work; yet opportunities were impossible to come by. Whatever I found would not even cover my transportation and other expenses. It was very hard on all of us,” he says.

The Beirut Port explosion was another dark chapter for the Boyadjians, with the epicenter of the blast just a couple of kilometers from their home. Pointing to the visibly damaged interior doors of the apartment, Boyadjian provides a minute-by-minute account of the events that unfolded on August 4, 2020, and the shocking aftermath. “Upon hearing a very loud noise, I moved into the kids’ room. Thank God I did; it’s what saved me. I hit my head slightly, as I was pushed from one side of the room to the other by an overwhelming force. The doors then flew off their hinges, the glass partitions smashing on the floor. It was unbelievable.” Boyadjian shares details of the Lebanese NGO that assessed the damage and repaired the home, replacing the broken doors and windows, in addition to the aluminum.

During this destabilizing period, Boyadjian received assistance in the form of food boxes from AGBU, made possible by the AGBU Global Relief Fund. He also benefitted from the organization’s clothing drive, which provided shoes and clothing for David and Daniel. “Following the loss of my job and the subsequent explosion that destroyed our city, it was comforting to have support from AGBU. The monthly food boxes have been a real help, given the cost of everything in the supermarket,” he reports.

With employment at the forefront of his mind, Boyadjian signed up for the AGBU Lebanon Employment Hub, an online platform designed to facilitate the employment of Lebanese Armenians. Established in August 2021 in response to the growing pool of talented Lebanese-Armenian citizens without work due to Lebanon’s economic crisis, its core mission is to improve the financial situation of its beneficiaries by helping them find jobs relevant to their skill set, specialty, or area of interest.

The hub connects job seekers with employers in two ways: through the AGBU website, which requires applicants to complete an online form; and via an offline channel, catering to those who prefer to liaise with a committee member, as well as candidates lacking internet connection or access to a computer.

In addition, the free-of-charge service launched by AGBU provides crucial moral support and professional guidance in the form of coaching and mentorship. Applicants can benefit from assistance in a variety of areas, from recommendations on how to write a compelling CV to grooming advice and tips on interview etiquette.

In November 2021, Boyadjian received a call from the owner of a transportation company who had learned of his situation. Recognizing Garo’s expertise in shipping, he asked to meet with him to discuss a vacancy at his firm, Ltc Express Cargo.

“He offered me a job at his company, and I grabbed it,” he says. At the firm, Boyadjian is responsible for preparing containers to be shipped to destinations including Sri Lanka and the Philippines. The firm has even provided him with a car. “I recently received a small pay increase. Thankfully, things are going well so far,” he adds, enthusiastically.

While Boyadjian’s employment status has improved, the family is still struggling to make ends meet. Roupina expresses her frustration in not being able to purchase items the children enjoy because money is tight. The soaring cost of electricity and food weighs heavily on their minds, and they continue to wonder what the future holds.

Still, in spite of the adversities, the family is financially and morally better off than before. With Boyadjian earning a salary, there’s bread on the table. “I am a hardworking man and want to be able to provide for my wife and kids without relying on handouts. I am grateful to AGBU for helping me get back on my feet and facilitating my return to the workplace. It’s a good feeling,” he says, smiling.

This article was featured in the 2022 release of AGBU Impact Magazine. For more information on AGBU Lebanon's Employment Hub, click here. 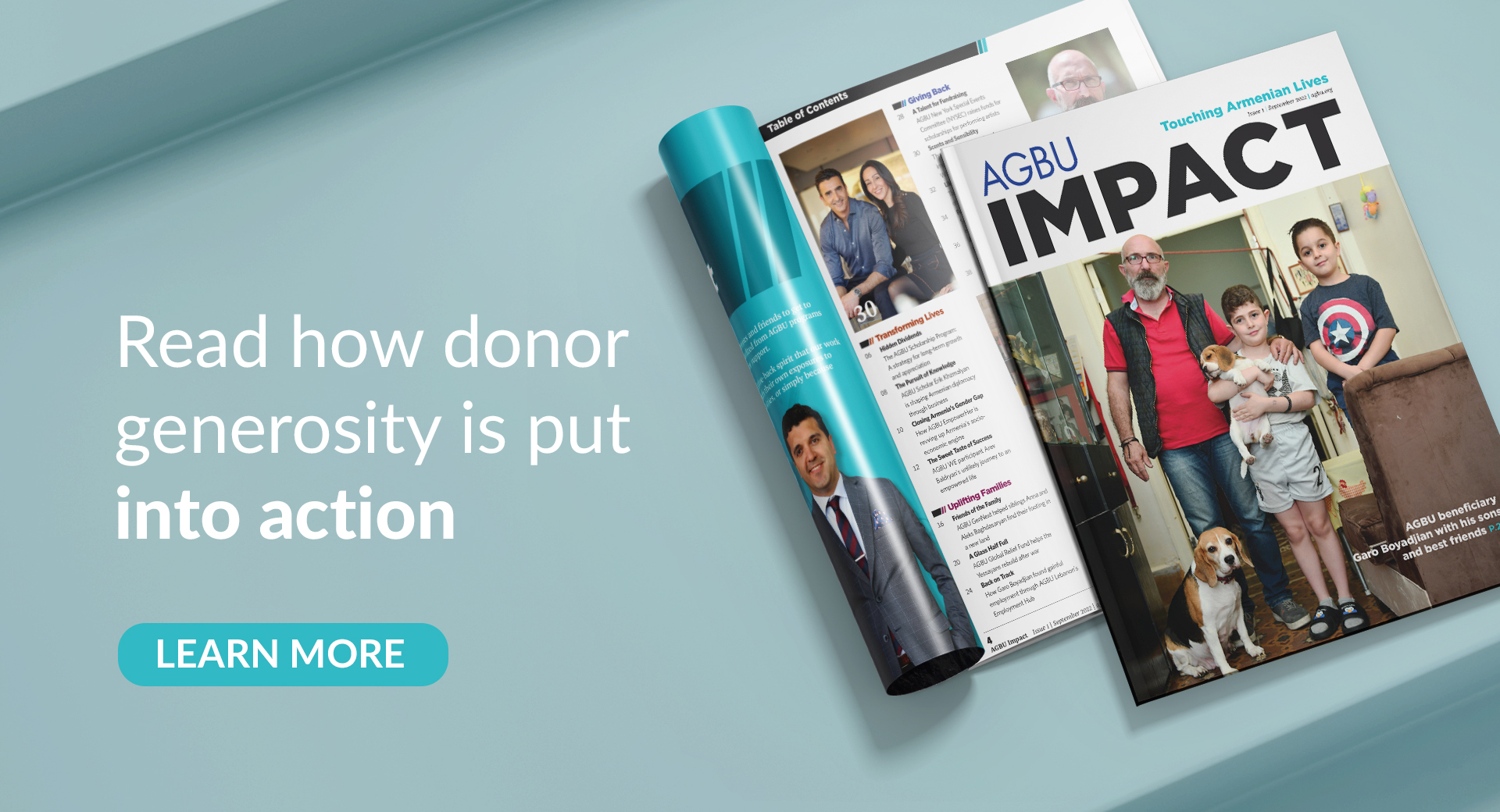 Unlikely global icons and celebrities who have visited Armenia
END_OF_DOCUMENT_TOKEN_TO_BE_REPLACED

A dialogue with historian Julien Zarifian on social justice
END_OF_DOCUMENT_TOKEN_TO_BE_REPLACED

How lawyer Natalie Samarjian turned a profession into a calling
END_OF_DOCUMENT_TOKEN_TO_BE_REPLACED