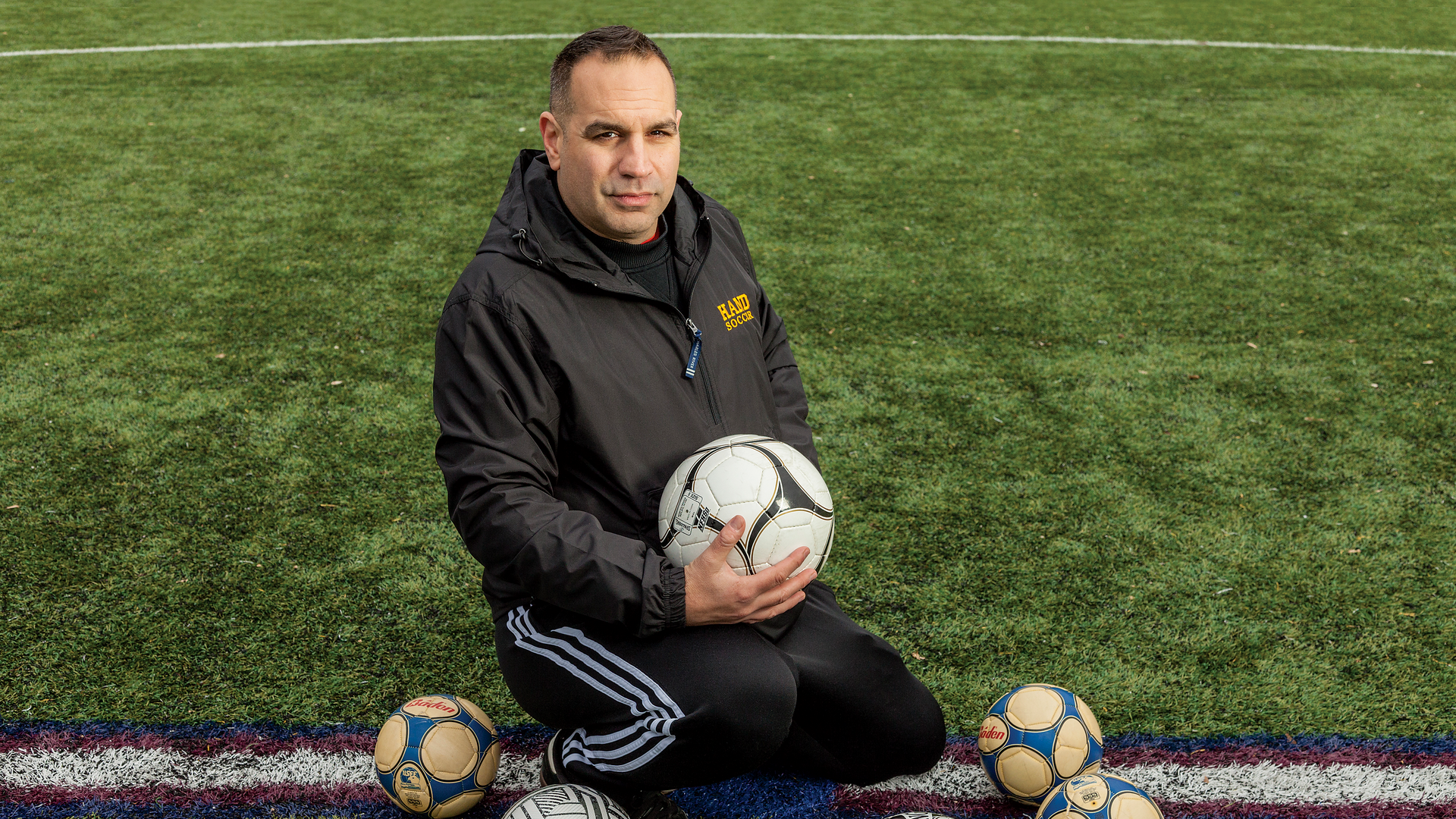 
An hour and a half south of Yerevan, through twisting roads that wind their way up into grass-topped mountains nearly twelve hundred meters above sea level, lies the remote town of Yeghegnadzor, home to a population of less than seven thousand. Gathered on the outdoor soccer field, a group of twelve-year-old girls are eagerly listening to their American visitor, David Dikranian, as he breaks down the basics of a game that here, represents so much more. With every activity, a powerful transformation is slowly taking place in this traditional southern Armenian community where soccer is considered a “man’s sport.” Under Dikranian’s extensive coaching experience with all ages and abilities, girls who have been told they belong on the bleachers and not on the field, are now boldly demonstrating that they are just as capable of playing sports as boys, challenging stereotypes and breaking down cultural barriers with every kick of the ball.

“Most of these girls have never kicked a ball before,” says Dikranian, who has traveled a long way from his home in Branford, Connecticut to help promote gender equity and youth empowerment as part of the Girls of Armenia Leadership Soccer (GOALS) program. “It was rewarding seeing them have fun and enjoy the camp. This experience is something I will never forget.”

For Dikranian, who grew up in a family of players and coaches, soccer was always so much more than just a game. It was a forum for family bonding and community participation. Father Bob Dikranian and uncle Haig Dikranian taught him core values of co-operation, confidence, tolerance, and leadership. Today, as a successful coach, Dikranian strives to develop those same values in the next generation of soccer players. He describes his role as a coach to teach the sport, instill the highest standards possible, and mentor athletes of all ages and abilities as they develop. “I find each age and skill level to be rewarding in its own way. I love working with high-level players because they are ready to push their skills to their maximum and to experience success in a competitive environment. I also enjoy working with beginner or recreational players because the emphasis is more on just having fun.”

With more than twenty years of experience as a licensed soccer coach, Dikranian also knows how to produce results. In 2014, Dikranian was named head coach of the varsity girls’ soccer team at Daniel Hand High School in Madison, Connecticut. That year he turned around a struggling program to lead the team to a winning record. Over the past four years the team has won two division titles and a conference championship, reaching the state semi-finals twice with an impressive 53-17-10 record. A core component of his coaching style is to provide the proper environment and mentality off the field to drive outstanding play on the field. Skillfully balancing a deep technical knowledge of the sport, discipline, and a positive and caring attitude, Dikranian connects with players and motivates them to excel. “I love seeing the progression and improvement of the players that I work with,” he says. “I do a lot of technical training and team building activities, so it’s very gratifying seeing both an individual player being successful as well as a team.”

Dikranian’s coaching expertise is not only in high demand at at the youth and high school level. He has previously worked as a video coach with the Yale University Women’s team and continues to work as a staff member of the Elm City Express of the National Premier Soccer League, which won a national championship this past summer.

In recognition of his efforts at Daniel Hand High School, Dikranian was named both the Southern Connecticut Conference Coach of the Year and the New Haven Register All-Area Coach of the Year. “It’s quite an honor,” he proudly admits. “It means a lot to me that the soccer community holds me in such high regard. It’s been a lot of soccer for me over the past six months but I wouldn’t trade it for anything!”

That passion for soccer runs deep in the Dikranian family. His father, Bob Dikranian, is a former six-time National Collegiate Athletic Association Division II National Champion and a member of the National Soccer Coaches Association of America Hall of Fame. Together with his brother Haig, Bob founded the Victory Soccer School in 1972, which has been a comprehensive summer soccer camp in Connecticut for more than forty years. Victory Soccer School was where David first began his coaching career as a college student. Over the years, he has since created his own soccer training program within the Victory Soccer School, running clinics for young recreation league players and training travel teams.

His wealth of experience has also taught Dikranian the importance of patience. Whether he is coaching a beginner or a higher-level player, he will never be heard being negative on the field. “Players at all ages and skill levels are constantly learning, so we as coaches need to show patience while each player builds their confidence and learns the game at their own pace,” he says. Similarly, he recommends that aspiring coaches learn how to work with children of different ages to understand the psychology of different age groups.

One of the best ways to grasp those skills, he says, is to seek out an apprenticeship with a successful coach or coaching program to gain practical experience in training youth. Above all, however, he advises coaches-in-training to follow the Dikranian family philosophy: “Make learning enjoyable and challenging—balance is the key!”

Dikranian strives to follow his own advice in all aspects of his life. When he is not on a soccer field, he can be found either working as a professional videographer running his own video production business, writing, or actively helping out in the local Armenian community in several capacities since his early twenties. “At that time I went on this incredible journey of learning more about my Armenian background. From serving as a youth mentor in my local Armenian church, working as a videographer for the pontifical visit of the Catholicos and participating in the AGBU New York Summer Internship Program (NYSIP); each event gave me greater insight as to what it means to be Armenian,” he says. “I truly enjoy staying connected to my roots.”

Players at all ages and skill levels are constantly learning, so we as coaches need to show patience while each player builds their confidence and learns the game at their own pace.

Dikranian has particularly fond memories of the AGBU New York Summer Internship Program in New York City. Being a film student at the time, AGBU placed him in two film-related internships. However, he says the most rewarding aspect of the program was the unique opportunity the program affords participants to meet other Armenian students from all over the world. “We all lived at New York University and together participated in Armenian-related activities, attended events and explored New York City. It felt like we were one big family. To this day I continue to correspond and network with many of those Armenian students from the program. They truly became my lifelong friends.”

His experience with NYSIP inspired Dikranian to continue contributing to Armenian causes. This past year, while planning his first trip to Armenia, he decided he wanted to do more than just visit. He contacted AGBU to inquire about volunteering and was directed to AGBU’s Together4Armenia and Bridge Program, which led to an opportunity to work with GOALS. By using soccer as a vehicle for positive change, the GOALS program to date has helped 380 young women in 21 rural communities foster healthy lifestyles, build self-confidence and form the kinds of friendships that will continue to support their development as empowered young women and in the process change mindsets about the importance of women in sports.

“God has blessed me by allowing me to do something I love and to get paid for it as a soccer coach here in the United States,” he says. “However, I felt that it was time for me to give back in life. Thanks to AGBU, I was connected with GOALS, which was the perfect opportunity for me to volunteer as a coach and make a difference in Armenia.”

As he maps out new ways to improve his soccer teams next season at home, Dikranian is also already contemplating a return visit to Armenia this year. Having had an opportunity to meet with the Armenian U19 Women’s National Team coach Liana Hayrapetyan and work with her team, together they hope to start a girls’ soccer club in Yerevan in 2018 to create an aura of excitement around women’s soccer and leadership in Armenia.

Benjamin Kemanián reflects on his upbringing and life in Montevideo
END_OF_DOCUMENT_TOKEN_TO_BE_REPLACED