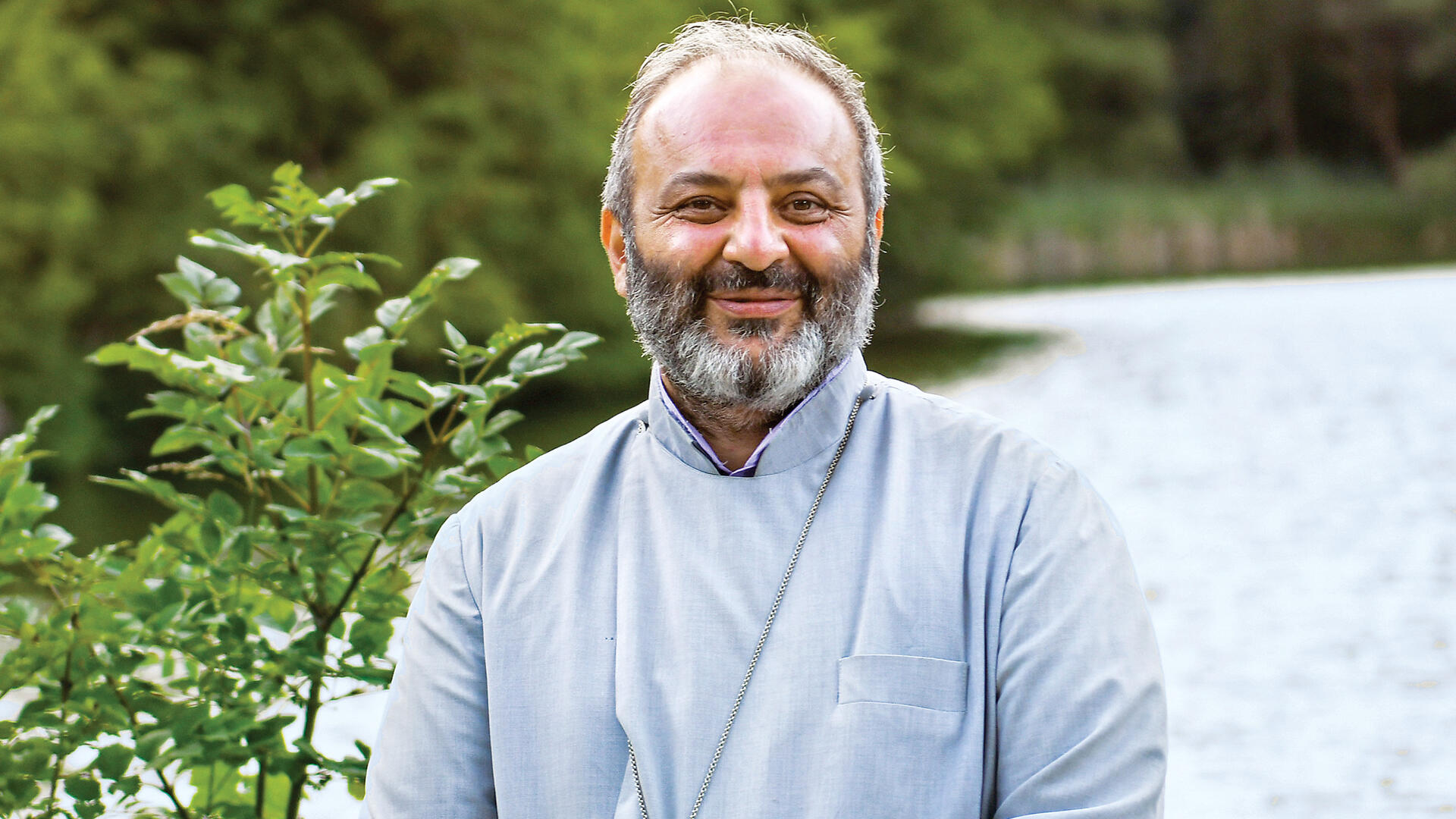 At heart, Bishop Bagrat Galstanyan sees himself as but a humble messenger on a mission to spread the good news of eternal salvation to those of little faith. But unlike the typical evangelist who exhorts through the scriptural Word, the good bishop communicates, in both countenance and deed, an ineffable oneness with a force mightier than the earthly weapons of war that have long threatened the existence of the communities he serves.

As the leader of the Diocese of Tavush, a region to the northeast of Armenia set just a stone’s throw from its hostile neighbor Azerbaijan to the east and its Turkish proxies to the west, Bagrat Srpazan tends to the spiritual and practical needs of a people accustomed to living on the brink. Yet all it takes is a twinkle in the eye, a cheerful grin and an outstretched hand of friendship to recognize the otherworldly aura he radiates to touch the hearts and minds of a community for which the exposure to physical danger is, as he described it, “a constant reality.”

In the wake of Azerbaijan’s most recent military escapade on the Armenia-side of the border, Bishop Bagrat was quick to disseminate messages of peace as well as provide those civilians living in exposed areas safe shelter, delivering both physical and spiritual sustenance. The eruption of the coronavirus onto the region’s mountainous scene added a new dimension to the outburst of violence—one that caught both secular and religious leaders off guard.

Little did he know then that these hostilities were the prequel to the all-out unprovoked assault on Artsakh on September 27, 2020. Within a few weeks of incessant bombardments across the line of contact, Bishop Bagrat made his way to Shushi to offer his prayers and blessings to the embattled soldiers and vulnerable civilians.

But faith in time of crisis or crisis of faith are both old friends of the bishop. He chose to grapple with them from the earliest days of his path to the priesthood in a time of lingering communist oppression of the Church and great spiritual disarray among the people.

Together with a small contingency of trained believers, Galstanyan, who had yet to be ordained in the 1990’s, was already a driving force behind the Armenian Church’s early efforts to reawaken Armenia’s spiritual legacy—a task made heavy by the momentous upheavals of fresh independence and ongoing war.

Obviously, there were times when I felt alone, but never lonely for I had the guidance of my Lord. And with Him, you can never go wrong.

“Our people are instinctively Christian,” said the ever-optimistic bishop. “But the huge gap in Christian education left by the Soviet regime meant buttressing these instincts with a more solid understanding of their origins and meaning.”

Grouped into small parties of two, this revived generation of deacons and priests toured the country under the banner of the newly-established Christian Education Center of the Mother See of Holy Etchmiadzin to instruct school teachers on the Christian faith, who were then to pass it on to the children enrolled in Sunday school. By the time then-Catholicos Karekin I handed their diplomas to the first graduates of the initiative in 1996, hundreds of educators had joined the effort from across the country, with many more to come. “The program was a marked success,” the bishop noted.

His subsequent involvement in Church communications as head of its media department and later president of the board of directors of Shoghakat, a television station operated by the Mother See, seemed only natural despite his lack of passion for the field. “It’s just that I understood the importance of media in spreading the message,” said Bagrat Srpazan as he reflected on the biblical aspect of the medium. “After all,” he quipped, “what was the New Testament if not the Good News, right?”

The Department of Social Doctrine of the Church—a fully novel dimension of this oldest of institutions and, according to him, soon to be one of its most important—was to amplify that message. Established under His Holiness Karekin II with the social applicability of religious doctrine in mind, the department had designs to render accessible the “so-called scary dogmas of the Church,” explained Bishop Bagrat, adding: “It has yet to reach its full potential though.”

Failure to inculcate its people with an understanding of the precepts of the Armenian Apostolic faith is a shortcoming the bishop believes the Church is still struggling with. “We haven’t been able to thoroughly introduce Church doctrine to society, though much of our social thinking is rooted in its tenets, whether we realize it or not,” he remarked. One way to bridge that knowledge gap is to apply his knowledge of media to engage people, even through social media.

Religious education was a challenge that he became fully cognizant of only after completing his master’s degree in theological studies at Concordia University while primate of the diocese in Canada, a position he assumed in 2003 just months before being ordained a bishop. “My thesis was devoted to healthcare in Armenia and how theology could help the system become more applicable and also more ethically sound,” he explained, adding that in the four years spent crafting this work, it opened new horizons for him regarding the ethical challenges facing the system and the role of Church doctrine in dealing with them.

Much of this would come to support earlier reflections born of his pastoral studies at the University of Leeds in the U.K., during which a young Galstanyan also attended the College of the Resurrection in nearby Mirfield and was a visiting priest at the Holy Trinity Armenian Church in Manchester, an opportunity made possible by the generous support of the Vatche and Tamar Manoukian Foundation through AGBU.

Upon his return to Armenia and after two years heading that Social Doctrine of the Church Department, he knew it was time for him to take stock of his relationship to his country and its people. “After 10 years abroad, I felt I no longer had my finger on the pulse of either,” he said.

Up for a new primacy, he requested a position in the border region of Tavush, despite his origins in Gyumri and those of his ancestors in the historically Armenian village of Sangbaran in Isfahan Province, Iran—which he jokingly calls the village of the Rolling Stones. (Sangibaran, as it is known to its Armenian residents, translates to “rain of stones” in Persian.)

Asked why go with Tavush then, a sobering silence suddenly gripped the bishop. Evidently, the place is something of a weak spot for the clergyman and it took him a good few seconds to reply, “I had to.”

The proletarian decimation of the Christian faith in the region had left the land spiritually barren, while the restriction of any and all talk of life in these parts of the country to the occasional flare-up on the border had reduced Tavush to a media sensation that failed to account for the full picture. “I, on the other hand, wanted to understand what was really going on there,” said Bishop Galstanyan. “I wanted to know who were these fearless people living on the border.”

But really, he was only coming back to the highlands where he had left his heart during his first attempt to reconnect with Armenia.

Upon returning from Canada in 2013, he and a few friends travelled to five border villages in the former Shamshadin area to bestow Christmas gifts to the local children—an endangered practice thanks to Soviet policy—and to spend some quality time with its residents. No such tour could have been complete without a visit to the frontlines. “That’s when I committed myself,” the bishop explained. “That’s when I promised to come back.”

But where many, if not most, would be concerned for their own safety, Bishop Bagrat has found nothing but pleasure and privilege in tending to the spiritual needs of this community—needs they themselves had grown numb to from years of neglect and absentee freedom of religion. “There is no greater joy for a minister than to feel that your people need you,” he said.

Beyond divine sustenance, the Diocese has also cared for the more worldly wants of the population, providing social and economic assistance in the form of scholarships, health coverage and other aid. “We're very much part of our society and do our very best to address all sorts of problems that are not necessarily tied to faith,” explained Galstanyan.

During the coronavirus pandemic, the diocese has worked in close contact with the local government to provide monthly food parcels to more than 2,000 families under its constituency with an emphasis on the socially vulnerable, especially the elderly and people with disabilities.

Telik, an organization of women weavers functioning under the auspices of the Diocese, was also the first to make face masks—this even before Tavush Textile, a glove-manufacturing company based in the border community of Berd, was reprofiled into the largest face mask producer in the country. Some 8,000 masks were distributed to the people free of charge.

Asked about any challenges he may have faced as a spiritual leader during his many years of service, Bishop Bagrat Tavushetsi, or Bagrat of Tavush as he is now known among the locals, was quick to deflect, steering the conversation back toward the many obstacles to prosperity in the region.

But when pressed for an answer, his reply was decidedly reverent: “Though I pray to be strong for my people, the truth is I’ve never been afraid, nor have I doubted myself. Obviously, there were times when I felt alone, but never lonely for I had the guidance of my Lord. And with Him, you can never go wrong.”

Banner photo: Bishop Bagrat Galstanyan in front of one of his favorite retreats, Lake Qari, near the village of Hovk in Tavush Province. Photo by Davit Hakobyan

From a small-world chance meeting between Micaela Ekserciyan and Alexis Koruk, a global leadership program was born
END_OF_DOCUMENT_TOKEN_TO_BE_REPLACED

Infectious disease specialist Dr. Tsoline Kojaoghlanian is a case study in giving back to the community
END_OF_DOCUMENT_TOKEN_TO_BE_REPLACED