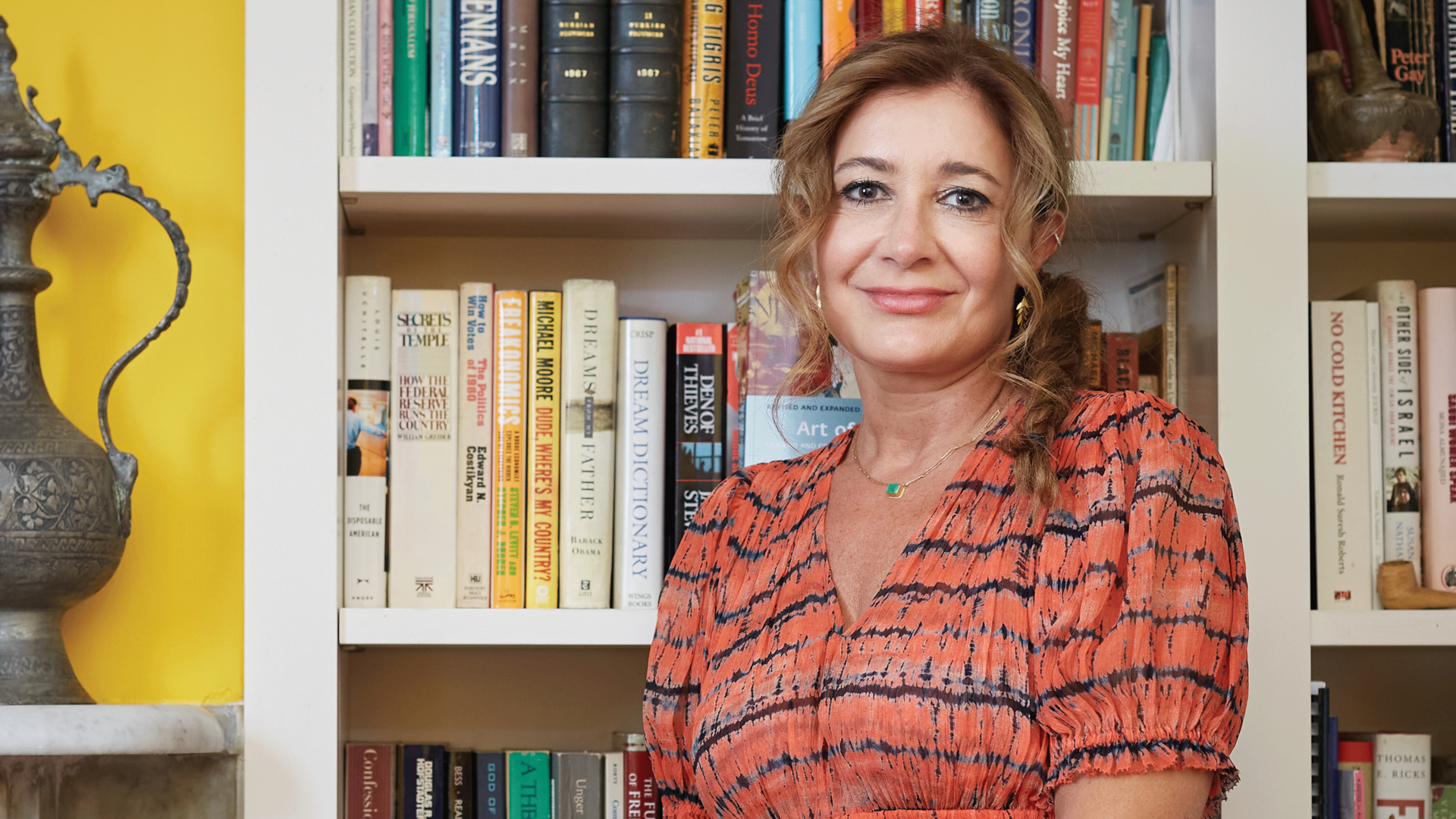 When it comes to U.S. policy in the Middle East, human rights leader Sarah Leah Whitson calls it like she sees it

Sarah Leah Whitson is not one to mince words. The attorney and former head of the Middle East and North Africa Division of international watchdog agency Human Rights Watch, was explaining the focus of Democracy for the Arab World Now (DAWN), where she has been Executive Director for the last two years.

“DAWN exists to aid in the struggle for democracy and human rights in the Middle East and North Africa,” she explains. “We focus aggressively and specifically on America’s own role in supporting some of the worst abusers in the region; our organization's goal is to change U.S. policy in the region.”

“The fact is,” Whitson continues, “the United States has been the strongest supporter, armer, funder, promoter, and defender of some of the most abusive governments in the region.”

Outspoken, impassioned, and unafraid of sparking controversy, Whitson has long wielded the power of the written and spoken word to effect change. While the areas of concentration for her current role are similar to those of her 16 years at Human Rights Watch, the positions and editorial slant at DAWN is more pointed, as it deliberately takes aim at the U.S. for its policy in the Middle East and North Africa. The organization was founded by murdered journalist Jamal Khashoggi, and Whitson’s passion is fueled by the moral obligation to carry out its intentions.

“Where DAWN has the greatest moral obligation is where the U.S. government is contributing to abuses in several of these countries, particularly by the military and political support the U.S. provides. We target the worst abusers, identify the culprits, and bring people from out of the shadows: the judges, the lawyers, the security officials, the torturers, the investigators, the whitewashers.”

Whitson’s career arc reflects an almost 180-degree shift from where it began. As a cum laude graduate of Harvard Law School, where she was a classmate of President Barack Obama, she joined Cleary Gottlieb Steen & Hamilton, an international white-shoe law firm, and followed that to a prestigious in-house counsel role at Goldman Sachs. But frustrated by the human rights and international law abuses she saw in the Middle East, Whitson felt an obligation to move away from the lofty and safe confines of corporate law. She understood the value her background and acumen in international law could bring to global NGO Human Rights Watch (HRW), which focuses on bringing justice to societies and citizens harassed by baseless arrests, government takeovers of media, suppression of opposing voices, and inhumane war crimes.

With the Middle East and North Africa region as her purview, she found no shortage of violations and atrocities.

Throughout her tenure at HRW, Whitson deftly deployed the power of the press to amplify the findings and garner attention. She penned notable op-eds and exposés calling out significant abuses in the region for the world’s widest-reaching outlets, writing about Libya in the New York Times, for example, and Tunisia for the Los Angeles Times. Her media profile and influence grew, and as her appearances on CNN, NPR, and writings in Foreign Policy and the Huffington Post increased, so did her reputation for stirring controversy. Whitson has been accused by partisans on both sides of complex regional issues of exhibiting bias, such as in the intractable, longstanding Israeli-Palestinian conflict, and has endured online smear attacks, even escalating to death threats, as a result.

What is little understood by many Americans is that the MENA region, with so many labile governments and economic inter-dependencies, “is not governed by the immutable laws of nature,” as Whitson has said, but is subject to the ebb and flow of a multitude of dynamics that only an expert in the area might understand.

In Whitson’s estimation, for example, many U.S. State and Defense department assessments of America’s security interests in the Middle East are outdated. “There is also the ideological burden of American supremacy and dominance, which has led to America having more military bases and arms sales, and ties to dictatorships in the Middle East than any other country.”

Whitson’s view is that these perceived interests are ultimately harmful to America’s standing in the area and have rendered it beholden to the defense industry and foreign government lobbyists who are the biggest donors to both parties.

Nevertheless, she remains hopeful that the U.S. will move in the right direction. Despite her disappointment with the current U.S. foreign policies and actions in the Middle East, Whitson is pleased with President Biden’s official recognition of the Armenian Genocide, although she characteristically tempers her approval.

“I’m extremely grateful that he did this, although at the same time, filled with frustration that it didn’t happen sooner,” says Whitson. “As was demonstrated, the sky didn’t fall, U.S. relations with Turkey did not suddenly implode—which is what we told the Carter administration, the Reagan administration, the Clinton, and the Obama administrations. It’s testimony to the relentless tireless efforts of the Armenian community to have kept tenaciously pushing this to the forefront of the American policy agenda.”

Whitson was born in L.A.; her mother, Ashkhen Haroutunian, had immigrated there in 1960. Her interest in Armenia and the region was fostered at Rose and Alex Pilibos Armenian School; during her summers visiting family in Lebanon, Syria, and Jordan, and later during her undergraduate studies at UC Berkeley, and during a year studying abroad in Egypt at the American University in Cairo.

Whitson wrote about the recognition of the Armenian Genocide in The Boston Globe and takes the view that setting that historical record straight is in a way as much a gift to Turks as it is to Armenians, since, as she explains, “Turks need to come to terms with what happened in the past as much as Armenians needed to.”

When asked if her unconventional career path as an international human rights activist is one that can be replicated for a generation armed with heightened political awareness and a collective consciousness raised by social media, Whitson paused to consider the meaning of her own role as a woman of Armenian descent carrying on the legacy of Jamal Khashoggi.

“That’s a huge question, particularly for Armenians. Number one, we are survivors. We are people who have experienced the worst atrocities, and so as survivors, as the lucky ones, as the ones who persisted, as the ones who had the resilience to survive, we have a duty to stand with those who are facing atrocities today, so that they too can be survivors, and so that they too can benefit from our resilience. For those Armenians in the United States or living in Western democracies, I would say we also have a duty to be good citizens.”

As first-hand witness to the ways the rights of citizens are limited in the Middle East in contrast to citizens in the West, she continues, “Freedom in a democracy isn’t just about the privileges of citizenship and the rights to vote; it includes an obligation to participate in politics, because ultimately that’s how democracies work. If we check out, if we are only concerned about our own personal wellness, our own personal financial security and nothing else, we are bad citizens, because we have forgotten our responsibilities and our duties to contribute.”

Freedom in a democracy isn’t just about the privileges of citizenship and the rights to vote; it includes an obligation to participate in politics, because ultimately that’s how democracies work.

“My experiences as an Armenian and as someone who straddled both the Middle East and the West has really shaped my outlook, my argumentation, my approach, my relationship to the people with whom I interact, whether it’s a victim of a massacre, or whether it’s a president in power. My work is very much shaped by the strength and the insight that comes from the unique Armenian experience not only of victimization, but also of flourishing and succeeding. Armenians are some of the longest surviving peoples in this planet. That is something to be celebrated.”

In addition to singling out corruption and unjust influences on foreign policy operating within the U.S., like those who appear in a new feature on the DAWN website that is unflinchingly called “Lobbyists Hall of Shame,” DAWN seeks to identify the larger trends that hamper human justice throughout the world. Whitson enumerates the fight against suppression and criminalization of sharing of content on social media in countries like Egypt, Saudi Arabia, or the U.A.E., where citizens are prosecuted for terrorism because of information or opinions they post. Whitson cites these governments for deploying surveillance and disinformation campaigns, including government-funded bot farms and generating false content to counter truth-telling and information sharing at the individual citizen level.

Whitson details how these seemingly minor threats to free speech escalate to harassment, threats, and attacks against those who gain influence and power through media like Jamal Khashoggi. The very existence of her platform, says Whitson, is an act of defiance against the most anti-democratic regimes in the region. While each of her individual efforts, whether a social media post about women’s mistreatment in the U.A.E., a YouTube video about freedom of speech abuses in Afghanistan, or an op-ed about the Saudi Royal family’s culpability in Khashoggi’s murder, may seem like a Sisyphean game of whack-a-mole, Whitson reflects on her two decades fighting for justice in a region mired in human rights violations.

“Long ago, I came to the resolution that I'm perfectly happy knowing I’m fighting for the right thing,” she says, adding, “Even if we don’t achieve all our goals, I think putting up the fight is an important value in and of itself. It calls attention to these issues and shines a light on them. Look how long it took for the U.S., the most powerful country in the world, to formally acknowledge the genocide of a people occurring more than one hundred years earlier. But Armenians never gave up. The history books will reflect that there were some people who were on the right side of issues and didn’t just go along like sheep.”

Sarah Leah Whitson is alumna of the AGBU Scholarship Program.

A dialogue with historian Julien Zarifian on social justice
END_OF_DOCUMENT_TOKEN_TO_BE_REPLACED

How lawyer Natalie Samarjian turned a profession into a calling
END_OF_DOCUMENT_TOKEN_TO_BE_REPLACED