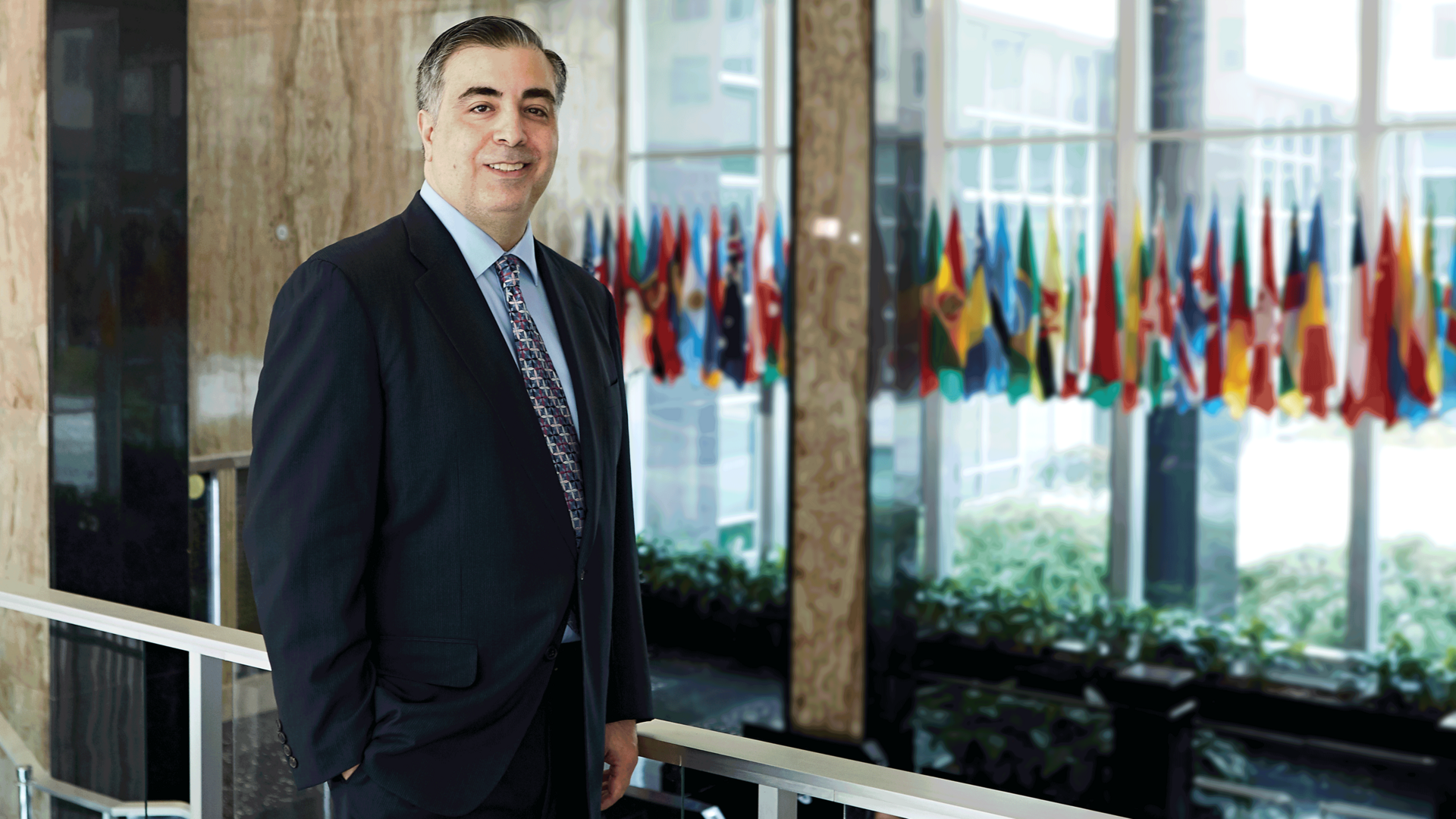 Serving a nation by representing its interests abroad with Raffi Balian


Long before Armenia declared independence and established official diplomatic relations with Washington, just a stone’s throw from the nation’s capital in Arlington, Virginia, the Balian household served as a de facto “embassy.” On many evenings Rita and Vartkess Balian could be found hosting D.C.’s diplomatic set, engaging in lengthy discussions on pressing issues as they related to the Armenian people.

When a powerful earthquake devastated the city of Gyumri, the Balian home transformed into a command center overnight. Calls were coming in with pleas for help and requests to inform the U.S. government that Armenia was in desperate need of assistance. The well-connected couple began working the phones immediately, reaching out to the State Department. Within days, a specialized Urban Search and Rescue crisis response team from nearby Fairfax County, Virginia—one of two in the United States at that time—was preparing to be deployed to Gyumri.

For the Balian’s teenaged son Raffi, the coordinated international response, partially orchestrated right from his parents’ home, left a powerful impression. “That event really brought it home for me and demonstrated the value of diplomacy and diplomatic work very tangibly,” he recalled. “Later, my parents invited the Urban Search and Rescue team to our home to thank them and my mom asked me to say a few words on behalf of young Armenian-Americans. It was a very moving experience for me to meet the team and to hear firsthand the value of people to people exchanges.”

As the Balians continued to assist the victims of the earthquake, helping establish a sister city relationship between Alexandria, Virginia and Gyumri, that meaningful experience cemented Raffi’s interest in global politics and diplomacy, which had taken root previously at the prestigious St. Albans School at the Washington National Cathedral, where he had established an international affairs club, inviting ambassadors and senior diplomats from nearby embassy row to speak to students.

Having been raised listening to stories from his grandmother who survived the Genocide and grew up in an orphanage in Beirut, Balian had also inherited an ingrained sensitivity to injustice best encapsulated in one of his favorite quotes from a letter Martin Luther King Jr. wrote while imprisoned in a Birmingham, Alabama jail: “Injustice anywhere is a threat to justice everywhere.”

As if pre-ordained to a life dedicated to resolving international issues, it came as no surprise that Balian later applied to the U.S. Foreign Service. The entrance exam process however—designed to weed out the top 300 from 30,000 applicants—would not come easy. Unsuccessful on his first two attempts yet undeterred, Balian persevered in true Armenian fashion and was finally accepted on his third try.

“Connecting my own history, my family’s history and perhaps a naïve teenaged dream to make a positive difference in the world, I had a very strong sense of public service and of wanting to give back to the country that had welcomed my family escaping civil war in Lebanon and allowing us to build a new life in the United States. I now have the profound honor of serving as an official representative of the United States, and that is very meaningful and a great motivator for me to be able to represent the American people.”

Whether promoting democratic transition as a Cultural Affairs Officer in Sofia, Bulgaria, helping temper commercial relations in Damascus, Syria in the wake of U.S. economic sanctions as Deputy Chief of the Economic Section at the Embassy, navigating a complex NATO enlargement as the Political-Military Officer in the Office of South Central Europe, or advocating for the use of modern sustainable energy throughout the world as the sole Foreign Service officer selected at that time to join the State Department’s Office of Global Change, Balian excelled in each assignment, transitioning with ease from role to role and capital to capital, creating consensus and helping to achieve U.S. foreign policy goals with tact and aplomb.

As Director of the Regional Environmental, Science & Technology, and Health Office for Central and Eastern Europe based at the American Embassy in Budapest, Hungary, Balian leveraged the convening authority of his position to implement major initiatives to improve energy efficiency and support environmental sustainability measures throughout the region. One of his proudest accomplishments he says, involved working through a regional multilateral environmental organization to assist seven municipalities in Ukraine develop multi-stakeholder processes that engaged citizens and officials alike to formulate local strategic action plans. These plans helped initiate a transformation toward much more energy efficient communities from one of the region’s least energy efficient. “When we began the process, there was skepticism about the approach; after two years of effort, we had built cohorts of citizens and officials across the country who not only believed in the process, but also became advocates of its effectiveness to their neighboring towns and cities.”

Sometimes in the most challenging of circumstances, Balian succeeded in overcoming seemingly insurmountable diplomatic obstacles thanks in no small measure to his Armenian heritage.

While working in the Consular Section in Damascus, Balian was assigned to provide consular support to U.S. citizens. “I would go into meetings with Syrian officials seeking help they normally would not be predisposed to offer, but after they asked about my background and discovered that my grandfather lived in Aleppo before moving to Beirut, they could relate to me because their neighbor or best friend growing up was Armenian and had a similar story. I was fortunate to be able to break through a wall of coldness and separation to achieve an outcome that helped American citizens return home safely.”

In addition to a longstanding family connection to AGBU, Balian’s Armenian identity is also influenced by his involvement with St. Mary Armenian Church in Washington, D.C., where he served on the Parish Council and as a Diocesan Delegate and is now actively involved in an ecumenical dialogue in the United States. It was at the AGBU Center in Beirut where his parents met and fell in love. When the family moved to Arlington, Virginia, they were instrumental in helping transform AGBU in North America. Inspired by the words of Vahan Tekeyan to ‘Rise and raise others up with you,’ Raffi’s father Vartkess served as Chairperson of AGBU North America and founded, along with his mother Rita, the New York Summer Internship Program (NYSIP) to help young Armenians become leaders in the community.

“I was there from the very first day of the launch of NYSIP over 30 years ago, and after my father passed away ten years ago,” Balian remembers, “I helped take over the responsibility, along with others, to ensure the program continues to have a meaningful impact in the lives of Armenians who are fortunate enough to be a part of the NYSIP experience.”

A NYSIP alumnus and now co-chair of the program, Balian has always felt a great sense of responsibility and pride carrying out that mission to rise and raise others up around him, providing opportunities to help other Armenians succeed. “I do so knowing full well I will never reach the level my parents achieved, but I am grateful to continue their legacy,” he adds.

I always felt being Armenian is not something insular to our nation. Our responsibility is not just to preserve our culture and identity for the sake of the Armenian people, but also to give back as part of the global conversation.

Back home in Washington, D.C., Balian’s workload hasn’t diminished. As a result of his expertise on international energy and environmental issues, he was asked to help solidify U.S. engagement with the International Renewable Energy Agency. With 158 member states, the Agency is the leading global voice for renewable energy with a mission to promote sustainable energy, including for the 1.3 billion people around the world who do not have access to modern energy resources.

In his current role as Senior Advisor in the Office of Commercial and Business Affairs in the State Department, Balian advocates for the interests of American business globally. It is a welcome opportunity from what has increasingly become a more challenging role for U.S. diplomats abroad. “After 9/11, the rightfully increasing importance of security and the critical need to protect men and women serving overseas has made it even more challenging in some parts of the world to connect directly with people, which is a fundamental part of a diplomat’s job,” he observed.

In performing his own job effectively, Balian lists a few essential qualities that anyone considering a career in the Foreign Service should possess.

“For me, the first trait that is critical is humility: know what you don’t know; be humble about admitting you don’t know it; and ask for help to learn. Connected to that is an ability to listen, find the scientists and other policy experts in the U.S. government and really learn from them. The role of a diplomat is also to be able to translate complex technical issues and make it relevant to broader policy objectives. The third attribute is critical thinking. You have to understand where your sources are coming from, assess the validity of the information, and weigh that information to understand what is important and what is not.”

Balian advises young people considering a career in diplomacy to do so with their eyes wide open and to be fully aware of the challenges they will face. Before committing, he encourages students to apply for an internship at the State Department or at any one of the embassies around the world and then decide if it is the right fit for them, just as his early exposure at home guided him.

“I always felt being Armenian is not something insular to our people,” he says. “As a people with a diverse global diaspora, our responsibility is not just to preserve our culture and identity for the sake of the Armenian people, but also to give back as part of national and global conversations, contributing to all human civilization, bringing the best of who we are as Armenians to the world.”

General surgeon Dr. Federico Keten is at the forefront of emerging medical technologies to reduce the burden of cancer in Argentina
END_OF_DOCUMENT_TOKEN_TO_BE_REPLACED