If ever someone had a career perfectly aligned with their lifelong quest, it would be astrophysics researcher Doris Arzoumanian. Her brilliant intellect, endless curiosity, philosophical bent, and academic discipline have earned her a distinct privilege in the fiercely competitive world of scientific inquiry—the chance to unlock one of the most profound mysteries of human existence or, as she describes it, the “formation of stars and planets in our galaxy.” Yet, this rising post-doc researcher with a PhD in astrophysics from the Université Paris-Diderot in Paris will also tell you that the secrets of Earth’s creation cannot be found under one’s feet, but in stars far beyond our solar system.

“Planets form around stars, and planets are the byproduct of star formation,” Arzoumanian explains. “To understand how the planets are formed and how life can exist on this planet, the first step is to understand how the gas and dust that exist in the galaxy first transform into stars. During their lifetime, stars create chemical elements by nuclear reactions, and when they die, this new material is released back into the galaxy out of which new stars and planets are formed. I am trying to understand how this process articulates in space.” She expounds: “The initially diffuse material is transformed into dense and elongated structures that we call filaments, which, due to the gravitational pull and other forces, fragment into dense prestellar objects. These are the progenitors of the stars and their planetary systems.”

To prove this theory, Arzoumanian conducts complex experiments using advanced equipment that register astro-phenomena through a variety of methods, from radio frequency and micro wave technology to super satellite photography.

Though currently pursuing answers at the Institut d’Astrophysique Spatiale in Porto, Portugal, Arzoumanian has been posing such questions ever since she can remember. “What are stars? What is a planet? Why are we on it? It was very important for me to understand the meaning of life, why it exists, why there’s something instead of nothing,” she reflects. “I also tried to link these questions from the religious perspective. Why do we need an invisible creator if we can explain what we see around us through the scientific method? That’s why, for me, astrophysics has a larger philosophical purpose in explaining humanity’s relationship with the Cosmos.”

Arzoumanian claims it was her parents who encouraged her to pursue such questions. She remembers her father taking her and her siblings to places in Lebanon to learn the history, the architecture and the geology, supplementing her innate love of books and learning. So fearless was her thirst for knowledge, that she left her native Beirut at age 18 to pursue such burning questions through rigorous academic study, extensive travel, and her own keen powers of observation, be it through a radio telescope that can transmit data from regions [or clouds of dust and gas] in the galaxy where stars form and otherwise visually undetectable due to their cold temperatures, or the detailed images sent from high-powered satellite-based space observatories. Sometimes, it’s through the lens of a colossal telescope perched on a remote mountain top at one of the several such observatories on earth.

“I wanted to be free and see not only more of the world but also different cultures and people. And I was always happy to go to school or university because, I liked to learn new things. I was ‘kind of’ good in science, so this made it easy to pass the courses,” Arzoumanian admits modestly, understating the laudable reality that she breezed through undergraduate school at the Université Joseph Fourier in Grenoble with a major in physics. She notes that she only discovered that it was possible to do a PhD after completing her master’s in astrophysics. During this time, she applied for scholarships from AGBU and was awarded two years in a row. “In those early years, I knew I needed to work to have money to do my studies, and then when I started my masters, I received the scholarship from AGBU in Paris. That allowed me to dedicate most of my time to my studies. It was very important for me.”

When it comes to her education, Arzoumanian is quick to emphasize that she embraces all the hard sciences. “I specialized in physics but I also very much liked biology, because I like plants and animals. I only chose physics because it was more difficult.” She goes on to say that astrophysics is where all the sciences conjoin. “It depends on physics, but also requires mathematical tools. You also need to understand chemistry and use computers to program data.”

While working toward her master’s at the Université Pierre et Marie Curie in Paris, Arzoumanian met a PhD candidate in astronomy who invited her to join him in an observation study in Chile. “I went there for a week and I learned how to do the observations in a professional way using the international telescope. That made me see astrophysics as a research field which I can pursue for a lifetime. To do these observations, one needs to visit remote places. This fits in with my lifestyle; I love climbing mountains and hiking. And of course, I am eager to do the observation itself and bring back valuable data.” She also had the opportunity to follow the movements of the stars from different vantage points, working in post-doc positions at observatories in France and Japan, in addition to her current location in Portugal. On a trip to Armenia, she visited the Byurakan Observatory with the hope of one day returning in a collaborative capacity.

As Arzoumanian describes it, without considering teaching and administrative duties, roughly one third of scientific research is the actual analysis, the observations and analyzing data. Another third is writing articles and papers for journals. The last third are the peer presentations, attending conferences and being part of a larger, international community. And while she still professes her love for travel, she interjects: “Lately I am staying close to home, given the global discussion about the environmental impact of long-distance air travel.”

Nonetheless, the international conference circuit that is a must for all post docs, affords Arzoumanian the exposure critical to raising her profile and expanding her professional network as she journeys toward the ultimate destination—a permanent position at a research university or institute. On that score, Arzoumanian makes a few more key observations.

“Science is already a competitive field because we all want to make a breakthrough before the others and there are so many different opinions and ideas out there vying for attention. And, there are only a few positions in universities and research institutes, as governments in Europe and other regions are cutting budgets on the research and academic work. With this oversupply of PhD students, many earn their doctorate and do post doc contract work for a few years, only to hit a wall when seeking a permanent position. They just quit, which is sad because it’s not that they lack the qualifications.”

A researcher should not be disappointed quickly and must find different ways of addressing a question in order to get to the result. We never can see the end, but I think that’s also the beauty of the research.

She then points out that of those who do land permanent positions, the majority are men. “There are female PhD students and young researchers, but even if they do research for a few years, their prospects for finding permanent positions are low.” Yet she also concedes that this might be changing in this new social climate of public support for more women in key positions in science. Either way, this gender imbalance doesn’t intimidate her, as love of her work and commitment to the mission are first and foremost. “I never considered astrophysics as a job. It’s part of my life and my passion. It’s good that it can bring me some money to live. I think that’s also what made me survive in this competitive field; otherwise it can be psychologically and physically challenging.”

She also recognizes that her individual ambitions are tied to a larger purpose. “I’m not only working for me, but I’m trying to help fellow researchers make progress. Understanding a specific thing like star formation, galaxy formation, evolution of the universe, ultimately has a practical impact on society. Sometimes instruments developed for research are later used in innovating technology that is commercialized for everyone. So even if I am working on a project that, on its face, has no practical value, it indirectly helps generate other kinds of research.” 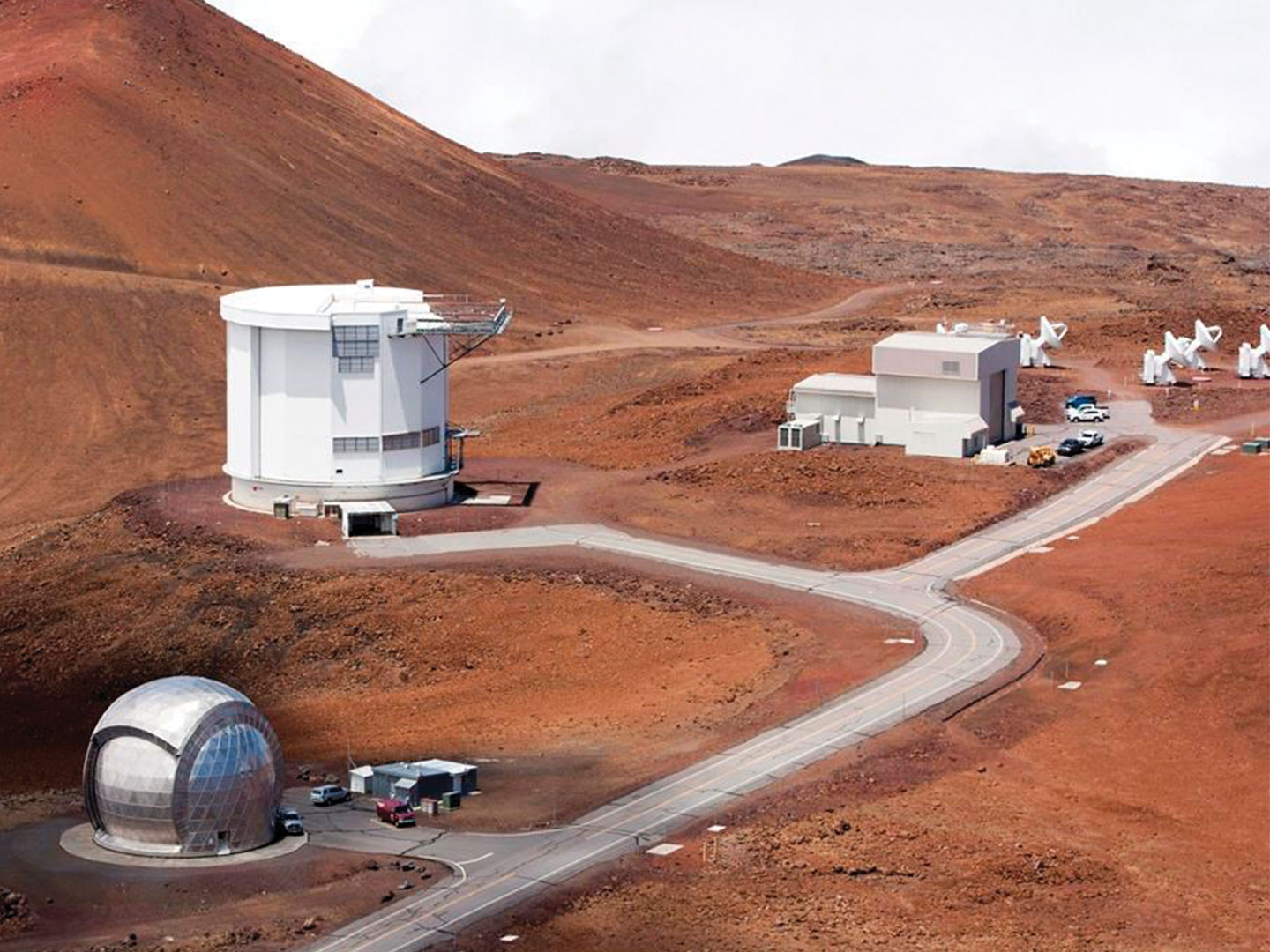 The serious stargazer ponders another question, this time posed to her—what advice she would give anyone interested in pursuing a career in science. “I will say that sometimes research can be difficult and getting to the result can be long. A researcher should not be disappointed quickly and must find different ways of addressing a question in order to get to the result. We never can see the end, but I think that’s also the beauty of the research. We can try to be as close as possible to the end, but there’s no end. That’s why I like to broaden my research or field. I always try to incorporate something new to gain different expertise with each experiment or study. I would suggest to always be curious about what’s happening around you, not only focusing on the particular subject at hand. This makes it possible to find synergies among different fields, which is a very powerful force to make progress.”

Speaking of powerful forces, Doris Arzoumanian is one to be reckoned with, as she reaches for the stars with no intention of settling for the moon. It’s not a planet anyway, she would remind us, and therefore not an option.

Originally published in the May 2020 ​issue of AGBU Insider.

The need for speed, scope and clarity in assessing crises on the ground gave Hripsime Matevosyan an inspired idea
END_OF_DOCUMENT_TOKEN_TO_BE_REPLACED

Varya Meruzhanyan has one of the world’s toughest challenges on her plate: food insecurity
END_OF_DOCUMENT_TOKEN_TO_BE_REPLACED

School is never far from home for Linda Karibian
END_OF_DOCUMENT_TOKEN_TO_BE_REPLACED