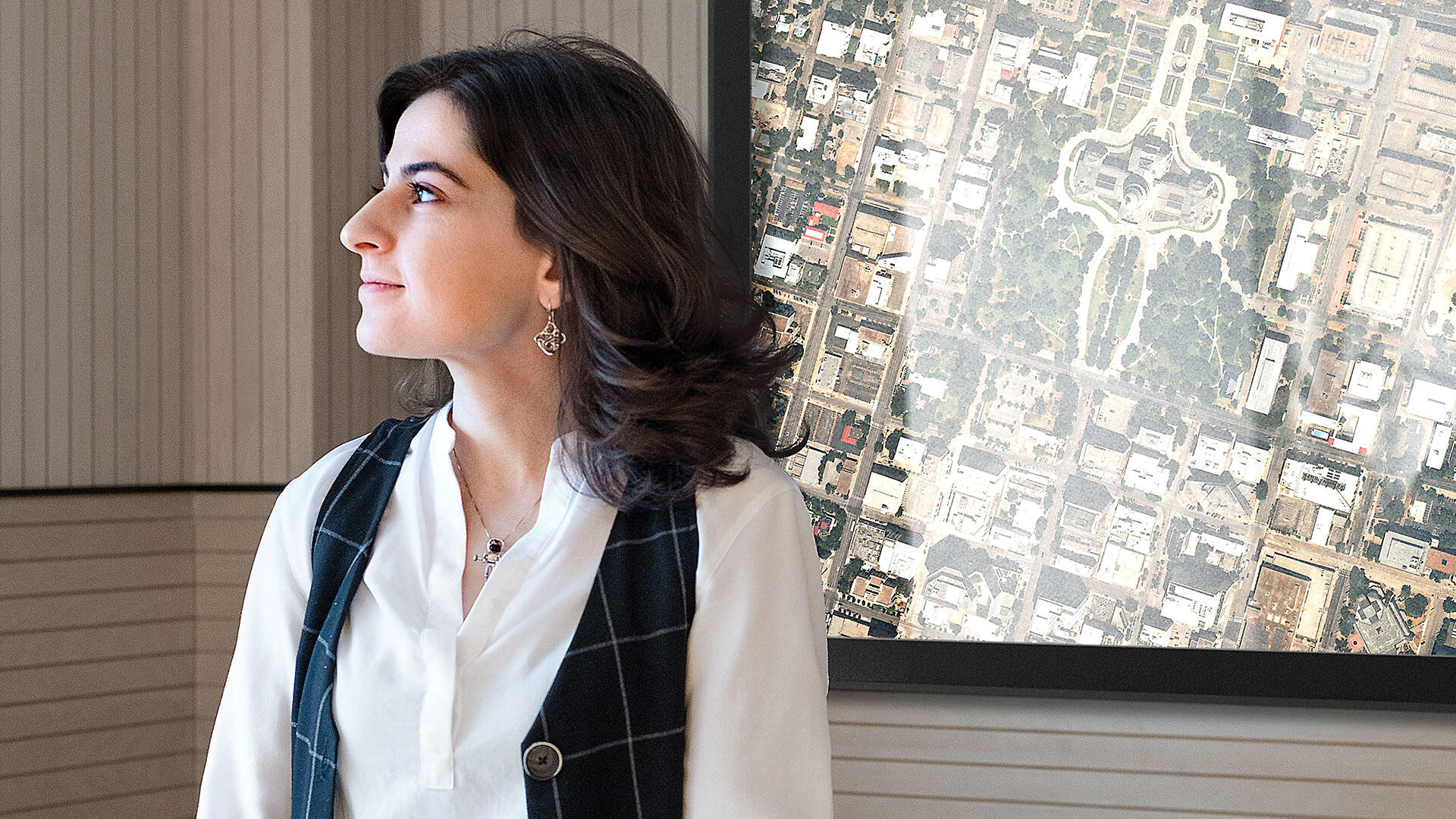 The need for speed, scope and clarity in assessing crises on the ground gave Hripsime Matevosyan an inspired idea


In the trendy office of Near Space Labs, Hripsime Matevosyan enthusiastically swipes through a Power Point presentation on her iPad filled with crystal clear aerial images of Austin, Texas. “We captured the densest imagery data set ever generated of a full city. Basically, we deliver frequent and affordable high-fidelity imagery of cities to businesses and municipalities.”

Capturing such high-resolution photos from the stratosphere may seem like an impossible task for most, but for Matevosyan, this undertaking is an essential part of her day to day responsibilities as the CEO and co-founder of Near Space Labs. Hripsime, or “Rema” as her colleagues have dubbed her, produced cutting-edge technology to photograph cities from the stratosphere in real time with her team, an accomplishment new to the space technology industry. This game-changing robotic vehicle is quickly becoming an important asset for local governments and organizations that want to solve infrastructure issues, evaluate environmental change and damage, and collect disaster response data. Near Space Labs’ prime market, however, are real estate insurance companies who use this technology to track urbanization, research market intelligence, and monitor construction. Pulling up a Google map image of the same location, it’s clear that Matevosyan’s image is sharper and more up to date. “There’s probably one other company that can compare with the resolution that we provide and there’s nobody else that can provide the frequency that we can.”

“Space is expensive, everybody knows that. To get high-resolution imagery is difficult and for a satellite to be able to provide the same resolution as we do requires larger and more expensive technology.” Nevertheless, Matevosyan firmly believes that her product will have a profound effect on cities and the geospatial data industry. “I think images of infrastructure can mitigate larger risks and consequences from floods and fires. For example, vegetation encroachment for electrical grids going through California can be a major fire hazard that could cause a big wildfire. Using our technology, you can monitor and maintain a healthy grid.”

“For example, the fact that we can track the effects of rainfalls and weather, especially in municipalities and counties that don’t necessarily have million and millions to spend on just one image, can have a profound impact on business opportunities and humanitarian issues. If one image is worth a thousand words, in our case it kind of adds up to endless business opportunities and questions about urbanization and infrastructure that we can solve.” Smiling, she adds “I’m very proud of what we were able to achieve with limited resources as a proper scrappy start-up.”

Matevosyan credits a “great love and excitement for space” as her main motivators. She recalls falling in love with space at an early age and commends her mother and grandmother for kindling her drive to shoot for the stars. A programmer and physicist respectfully, both role models instilled in her a love for space and the encouragement that she could accomplish anything she set her mind to. She fondly remembers her grandparents setting up a telescope in her childhood home at 3:00 in the morning, teaching her about the constellations and star maps. “People underestimate the power of role models, especially for girls discouraged to take on STEM because it’s ‘hard.’ The fact that I grew up in a family that made me feel like I could accomplish anything, it just inspired me greatly.”

Matevosyan started Near Space Labs with her co-founders Ignasi Lluch and Albert Caubet in 2017 determined to provide affordable high-resolution aerial photos of cities to make space accessible for all, a mission inspired by her childhood in Yerevan. “In Armenia, we didn’t have space programs. I come from a small country excited about space, but space is expensive and inaccessible. Depending on the satellite tasking, it can be really, really expensive.” Yet, Matevosyan’s entrepreneurial skills and ambitious attitude have kept Near Space Labs on the rise. “As my CTO likes to joke, he says that we are the software of hardware, which means that even though hardware engineering is usually very hard, the flexibility of our technology allows us to move more quickly.”

A CEO at just 28 years old and on the Forbes 30 Under 30 in the Manufacturing and Industry List 2019, Matevosyan has shattered the glass ceiling several times over and reached above and beyond what she would have ever expected. Her career path, however, was not always so straightforward. “I had a flick of a moment where I wanted to become an Egyptologist since I was studying hieroglyphics in high school,” Matevosyan says with a chuckle. “But thankfully my mom encouraged me to focus on math and geometry.” After attending Physmath, the top STEM high school in Armenia, Matevosyan moved to Moscow to acquire a master’s degree in control and applied mathematics from the Moscow Institute of Physics and Technology with the help of an AGBU Scholarship. In tandem with her studies, she was working in one of the research institutes of the Russian Academy of Science to support her family. “For an applied math degree, you take years of calculus, logic, discrete mathematics, and one of my favorites, game theory. Anyone in STEM who builds or researches something touches upon applied math to understand how things work. I was already working and studying, so getting the scholarship took some pressure off of me since I was helping my mom and supporting the family.”

After completing her master’s, Matevosyan enrolled in a PhD program for systems engineering in complex aerospace systems, her favorite aspect of space. She was set to complete her program, until an unexpected course changed everything for Matevosyan. In order to fulfill her PhD requirements, Matevosyan and her friends begrudgingly enrolled in an entrepreneurship class, where she was one of the two female students in her entire program. “Imagine a group of PhD students going to a class about entrepreneurship. I have to confess; we went there with a reluctant attitude.” After meeting Professor Zeliko Tekic, however, Matevosyan learned that her academic research could be commercialized and applied to the real world. “He kind of planted this seed into my head, which hadn’t been there before, and suddenly everything began to click.”

Few people would drop out of their PhD program and move across the world in less than two weeks to pursue a newfound start-up idea. For Matevosyan, however, following her dreams of working in aerospace made this risk worthwhile and one of the best, and most unexpected, decisions of her career. “In every start-up handbook, you learn that if you’re not excited about what you do, you shouldn’t be doing it because building a company from zero to a multi-billion opportunity, is not easy.” She goes on to say, “I was on an academic path as a researcher. I would have never thought that I would become an entrepreneur.”

Alongside fellow PhD students Ignasi Lluch and Albert Caubet, Matevosyan had applied to accelerators and grants, all while continuing her studies. After getting to the final round of interviews and receiving seed money from Urban-X, an urban improvement accelerator, Matevosyan knew she had to seize this opportunity. In a whirlwind five months, all three founders moved to Brooklyn, joined the accelerator, and built a prototype of their stratospheric vehicle. Matevosyan confesses that it wasn’t easy, “When you start something new like this, people usually think you are crazy. We claimed that we could fly weather balloons and produce better imagery than everybody else in the market. But we did prove ourselves and we raised money from top tier Silicon Valley investors, including Draper Associates, Wireframe Ventures and Leadout Capital.”

Their product has come a long way from their three-bedroom apartment in Brooklyn. Near Space Labs has moved to the skyscrapers of Fifth Avenue, grown to eight employees with more to come, and a completed robotic system that can be sent into the stratosphere using weather balloons. “We launch this system on a weather balloon, it flies to the stratosphere, which is twice higher than airplanes. And from that height, it hovers for a couple of hours in the stratosphere and scans the area that it sees.”

People underestimate the power of role models, especially for girls discouraged to take on STEM because it’s ‘hard.’ The fact that I grew up in a family that made me feel like I could accomplish anything, it just inspired me greatly.

As of now, Matevosyan is focused on building her team and managing an inclusive workplace culture. “Empathy and care are our core values and are top priorities, so we try to foster it as much as we can because the role of emotional intelligence in business isn’t really exercised enough, yet the importance of it is very, very high.”

Evidently, Matevosyan has not only started a company, but a movement in the world of space technology. “Movements are created around good missions and people that can relate to and inspire others. Being able to work in a company that democratizes access to space is very rewarding to me. The fact that any city in even smaller countries, like Armenia for example, have the opportunity to buy a stratospheric satellite and use it for the interests of their citizens, really inspires me.” As this tech prodigy ponders the future and dares to enter uncharted territory, there’s no telling what her inventive mind will solve next.

Varya Meruzhanyan has one of the world’s toughest challenges on her plate: food insecurity
END_OF_DOCUMENT_TOKEN_TO_BE_REPLACED

School is never far from home for Linda Karibian
END_OF_DOCUMENT_TOKEN_TO_BE_REPLACED