Skip to main content
Image
Layout
A- A+
read
AGBU Magazine | Remembering the Past, Redefining the Future

How photography shaped a family’s destiny

The Dildilian family traces its roots back centuries to the former city of Sepastia, now part of modern-day Sivas, on the soil of historic Armenia. My grandfather Tsolag Dildilian took up the profession of photography in 1888 and over the next 34 years, expanded the business across the province of Sivas and beyond, including the towns and cities of Amasya, Marsovan, Samsun, Konya and Adana. While Dildilian studios were opened in each location, their photographic work was not limited to the region. As traveling photographers, they took photos as far east as Trebizond and as far west as Constantinople. Tsolag’s younger brother Aram, who trained at one of America’s leading photography schools, the Illinois College of Photography, and his artistically gifted cousin Sumpad, joined the business during the first decade of the 20th century. The fame of the Dildilian Brothers Art Photographers soon grew. Tsolag became the official photographer of Anatolia College, which had been founded by American missionaries in Marsovan in 1886. The family made Marsovan their home. Beginning with portrait photography, they quickly expanded their pictorial subject matter to include ancient monuments, city panoramas, country landscapes and the everyday activities of their communities. Employed by the Ottoman government, they also photographed historic sites throughout Anatolia. Many of these images would be reproduced as postcards.

The family and their business suffered setbacks as a result of the Hamidian massacres of 1894-96. They confronted their greatest challenge, however, during the years of the genocide. Tsolag was conscripted as a military photographer, his skills having been deemed essential for the war effort. His brother Aram later was called to similar duty by the state. Yet such service did little to protect the family. In August 1915, they were forced to convert to Islam and adopt Turkish identities. Facing deportation and certain death, they chose to hide their true Christian identity in order to save their family members in Marsovan. This was a decision that not only served their own family, but allowed them to help save thirty others, as all along the Dildilian brothers secretly worked to rescue and hide young Armenian men and women in their households during the war. Tragically, they were not able to protect any of their family members living outside of Marsovan. With the exception of two young nieces from Trebizond, who they rescued from Turkish families at the war’s end, the rest of the family perished.

Despite having lost more than sixty family members, countless neighbors and friends after the armistice of October 1918, the Dildilians hoped to remain on their native land. They sought to revive the family photography business in Marsovan and Samsun. Yet unlike the pre-war subject matter of class graduations and portraits of Armenian, Greek and Turkish elites, they instead documented the remaining fragments of their destroyed community– the thousands of orphans who had survived the genocide. Many of their photographs were used by Near East Relief to raise funds for the recovery effort. Both Tsolag and Aram helped organize orphanages in Marsovan and Samsun. The brothers also provided photographic evidence of the massacres to both the British and American authorities after the war. With the false hope generated by promises the victorious Allies would fail to keep, they slowly rebuilt their lives on the soil of their ancestors.

The rise of Mustafa Kemal’s nationalist forces brought a second wave of massacres that swept the countryside and killed countless numbers of survivors of the earlier genocide. The Dildilian family once again faced persecution. Topal Osman and his militia ravaged their hometown of Marsovan in the summer of 1921, killing hundreds of Armenians and Greeks. Although the family was hoping to rebuild their lives and business in Samsun, they were forced to abandon their home. When confronted with the choice to either give up their Armenian identities once again, or leave their homeland, they chose exile in Greece. The hardships of refugee life in Greece compelled some family members to emigrate to France and the United States. Tsolag re-established his photography studio in Greece, while Aram pursued his love of photography in the United States. My uncle Humayag and mother Alice, the son and daughter of Tsolag, took up the family tradition of photography, operating the studio in Athens until the early 1950s. They both would eventually settle in the United States, with my uncle continuing to pursue photography in Hartford, Connecticut. The family was never able to return to their beloved homeland.

Near the end of his life, Humayag designated me the guardian of the family’s photography archive, entrusting to me thousands of photographs spanning almost a century. Using extensive family memoirs, letters, audio and video testimony, I have sought to recreate what their lives were like in historic Armenia by writing a book that chronicles the Dildilian story, the richly illustrated Fragments of a Lost Homeland: Remembering Armenia (I. B. Tauris, 2015). With the help of a progressive-minded Turkish NGO and the artistic skills of my Turkish-Armenian friends, I was also able to present major photography exhibitions in Istanbul and Diyarbekir that told my family’s story in all its joy and pain. Future exhibitions will take place in Yerevan, Ankara, Thessaloniki, London, and if the necessary funds can be raised, in the United States. My greatest sense of accomplishment was achieved when I presented the photographs in Marsovan. My family—those alive today and those no longer with us—were finally able to return home to the land they so dearly loved. 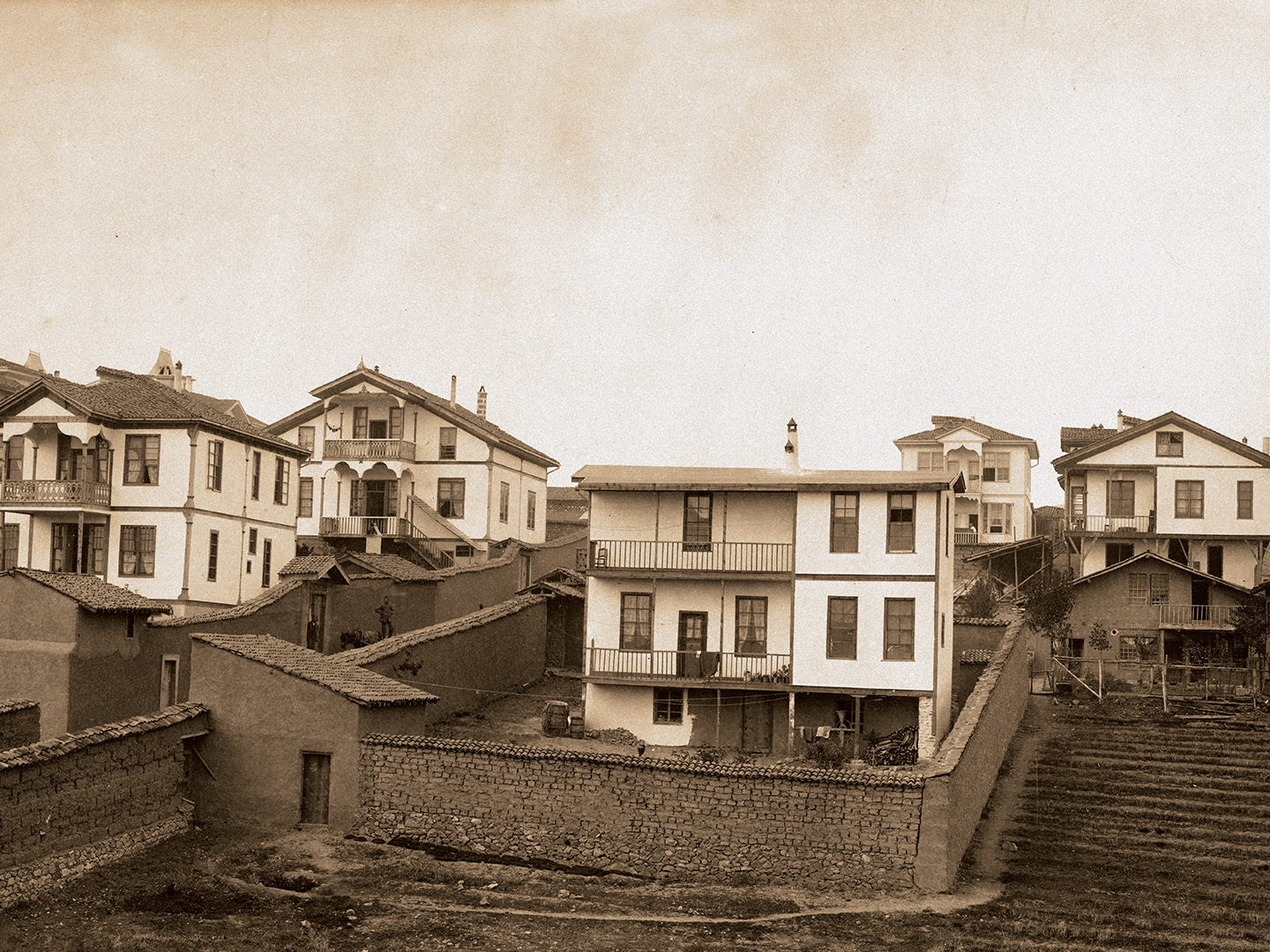 Houses on the College Street adjacent to the Anatolia College campus. Homes (left to right) of Prof. A. G. Sivaslian, Prof. J. J. Manissadjian, the Djizmedjian family, Prof. V. H. Hagopian (in rear) and the Dildilian home and studio (far right), circa 1906.
Image 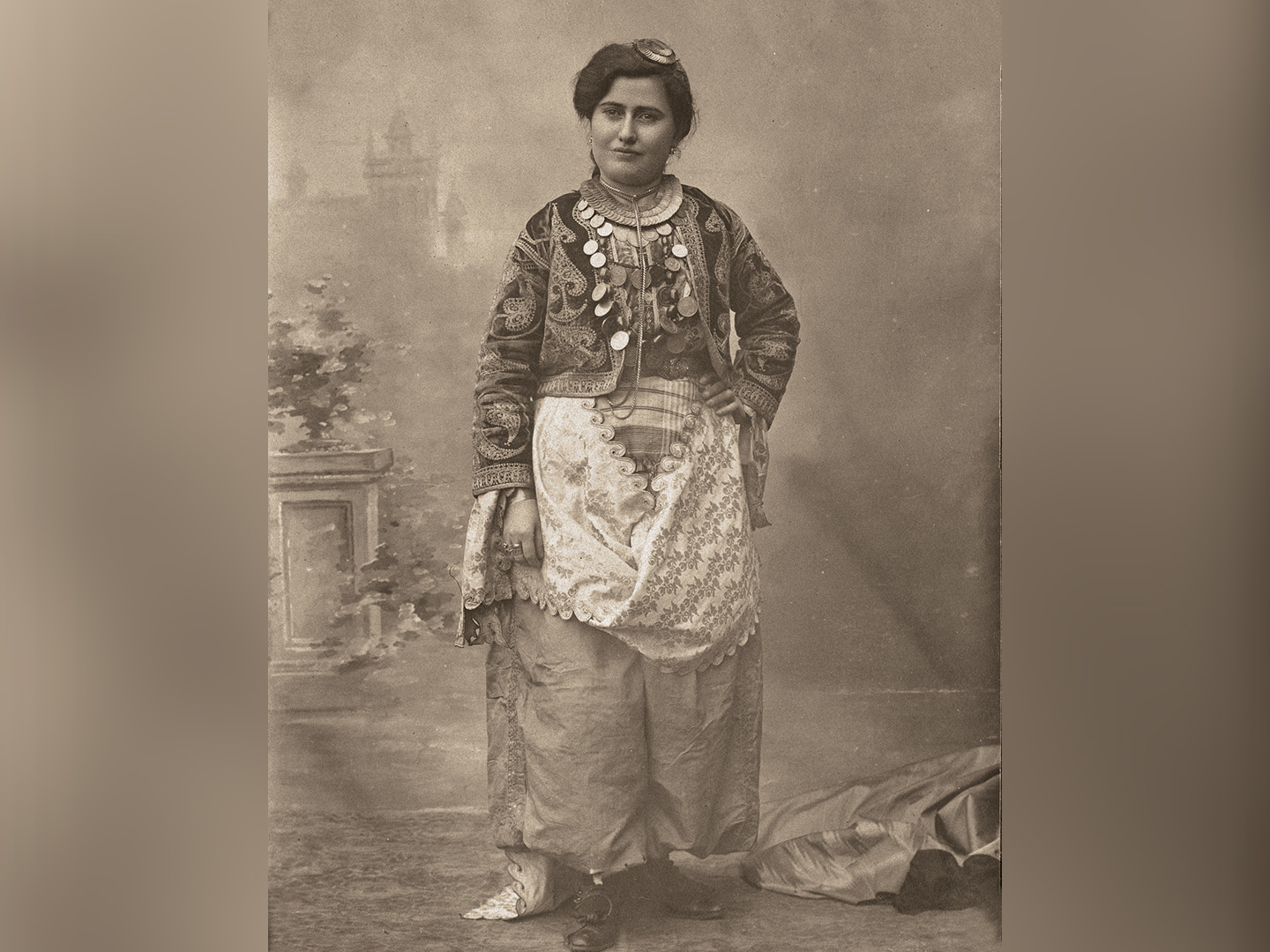 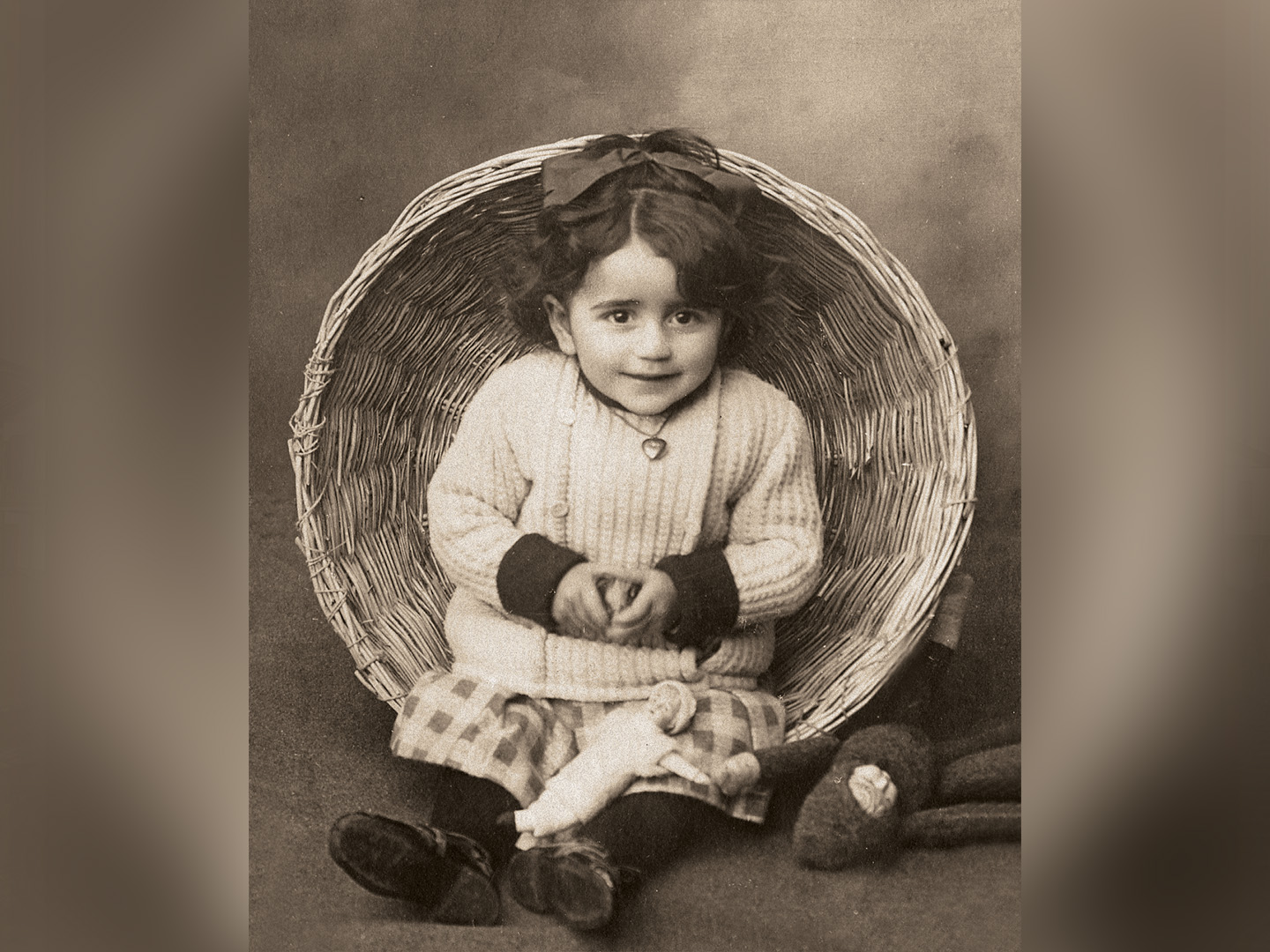 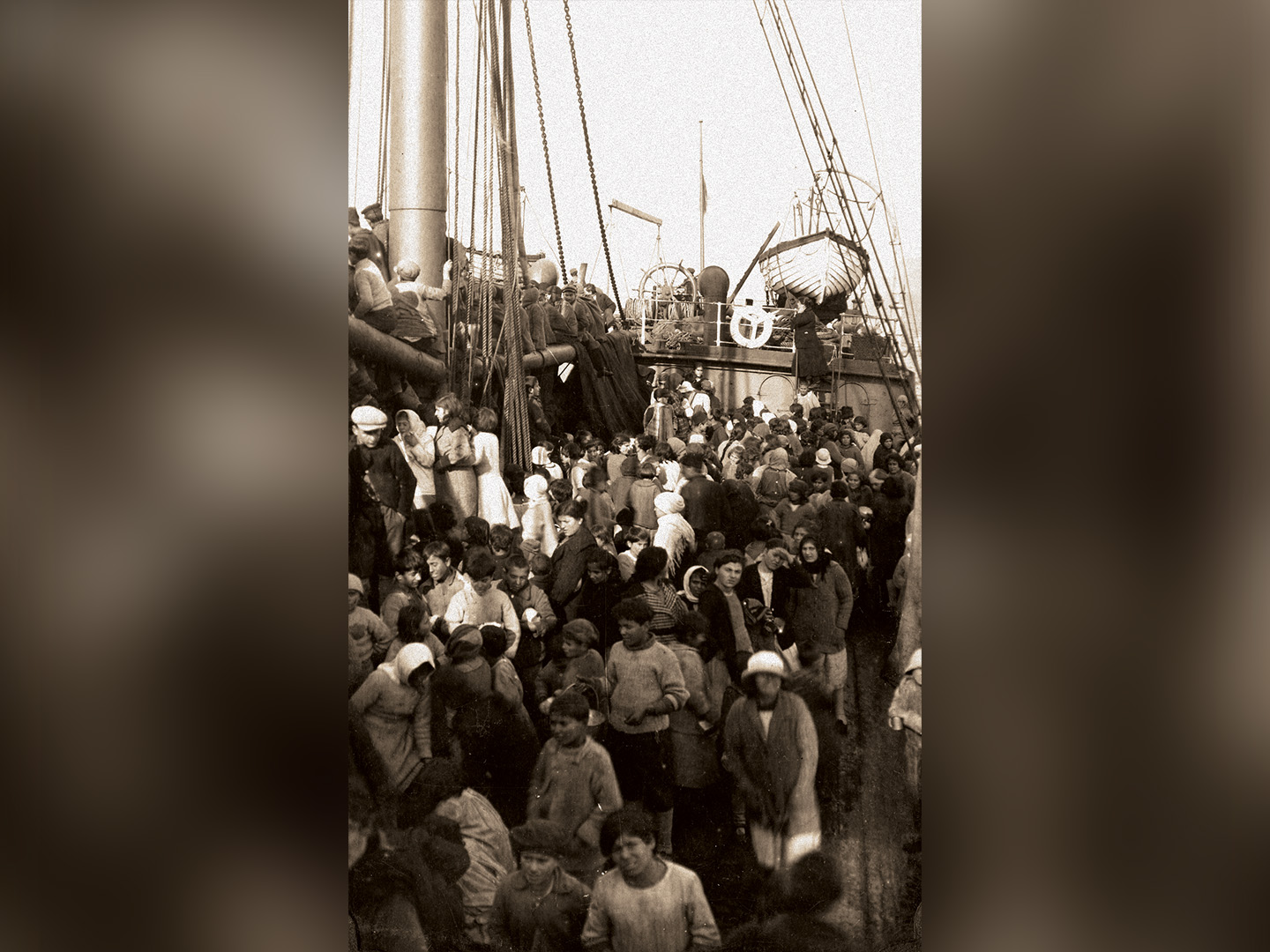 Orphans on the deck of the S.S. Belgravia. My grandmother Mariam Dildilian on the ladder in the distance pointing to the life preserver, November 1922.
× < >

Originally published in the April 2015 ​issue of AGBU Magazine.

A Conversation with Peter Balakian
END_OF_DOCUMENT_TOKEN_TO_BE_REPLACED

The Diaspora Project: Armenian communities around the world a century after genocide
END_OF_DOCUMENT_TOKEN_TO_BE_REPLACED

AGBU relief efforts in the aftermath of World War I
END_OF_DOCUMENT_TOKEN_TO_BE_REPLACED

Issues of Identity and Mobilization
END_OF_DOCUMENT_TOKEN_TO_BE_REPLACED