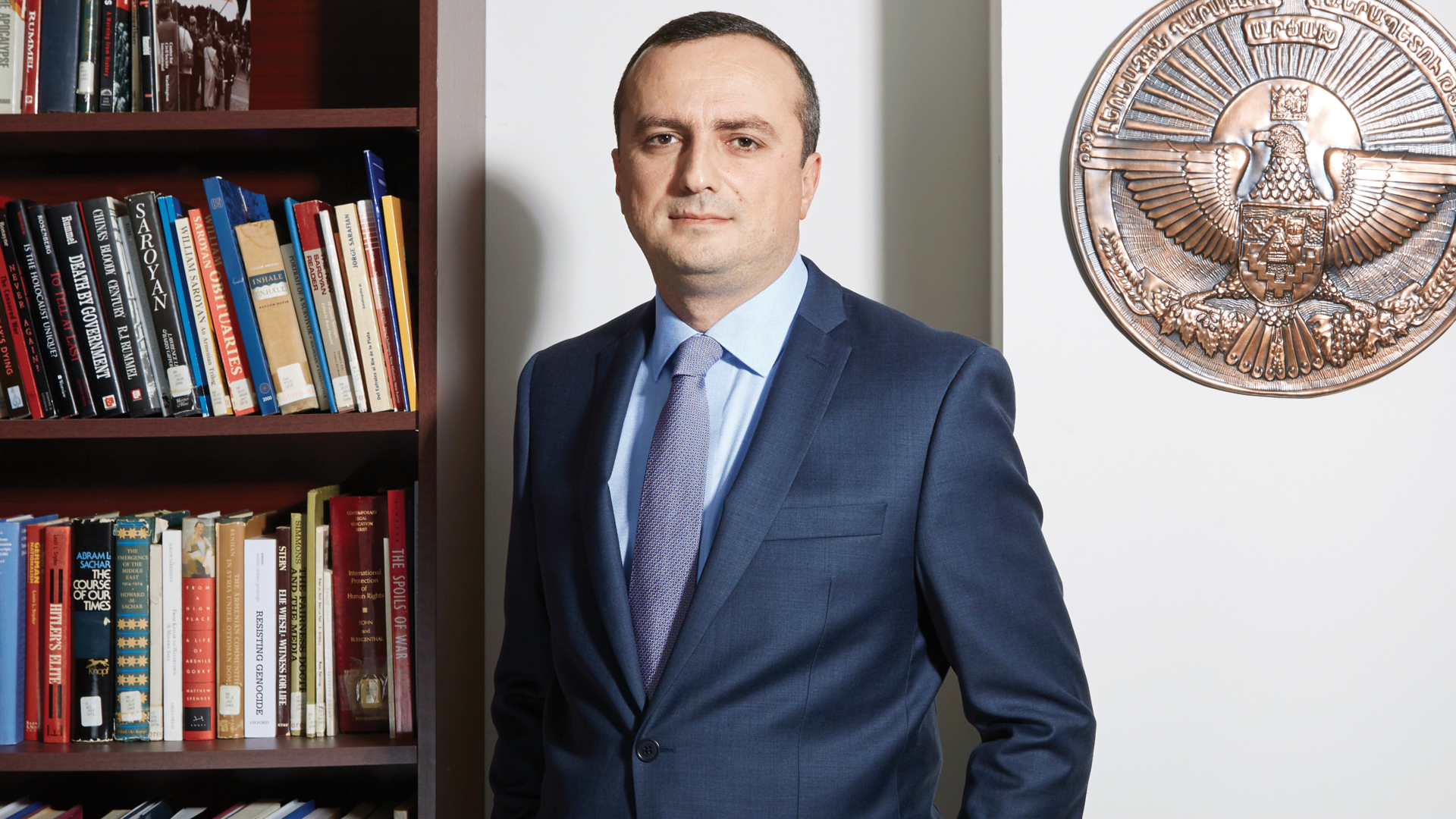 
When the liberation movement in Artsakh began 30 years ago, Robert Avetisyan was a boy of nine. Like most Armenians born to this mountainous enclave under constant threat of war with a formidable and intransigent foe, the seeds of ultimate victory, both morally and militarily, were firmly rooted in his heart and mind. The lessons of endurance and overcoming impossible odds were not lost on this young eyewitness to the all-out war and blockade that devastated both the infrastructure and the economy of Artsakh but ultimately did not break it. These early experiences not only defined Avetisyan’s career path but also shaped his worldview.

How the rest of the world perceives Artsakh today is now Avetisyan’s primary preoccupation in his role as the Permanent Representative of the Republic of Artsakh to the United States and Canada. Since taking up the position almost a decade ago, he has been moving through the corridors of power in Washington D.C. to make his case for Artsakh. In the process, he has become a skilled player in the chess game that is geopolitics, always with one eye on the endgame: international recognition of Artsakh and peace in the region for all.

In the meantime, as a spokesperson for the Artsakh government, Avetisyan engages with diverse stakeholders from legislators and advocacy groups to investors, business executives and diasporan communities throughout North America. His first priority is defending his compatriots’ right to self-determination, on which recognition of Artsakh as a sovereign state is predicated. At the same time, he is actively promoting Artsakh as a promising place to do business and a premier tourist destination.

Avetisyan’s professional journey began with a degree in philology from Artsakh State University, which opened doors for him in the Foreign Ministry of Artsakh. In 2009, he was appointed to his current post to become the third permanent representative of Artsakh since it first planted its stake in the U.S. capital in 1997. The scope of responsibilities and the environment in Washington D.C. made Robert realize that the time had come for him to expand his educational credentials. In 2013, with the support of an AGBU scholarship, he earned a Master’s degree in International Affairs from the Fletcher School of Law and Diplomacy at Tufts University.

When asked what aspect of his mission keeps him up at night, he replied that “Artsakh is unfortunately often perceived as a dispute between Armenians and Azerbaijanis. Azerbaijan and its supporters in Washington repeatedly attempt to misrepresent Artsakh’s claim to self-determination as a confrontation between those two countries. “The strategy is clear,” he goes on to say. “The authorities in Baku try to characterize the Karabakh problem as Armenia’s claims towards Azerbaijan. It’s my job to ensure that questions about the processes in and around our republic are clarified so that Artsakh is acknowledged as a country in its own right. After many years, we can now demonstrate that we are a trustworthy partner that has built strong democratic institutions complemented by a vibrant civil society.” He also noted that these national assets help foster a stable and predictable South Caucasus.

On the controversial subject of Artsakh’s claims to self-determination, Avetisyan argues his position from the broad historical context. “When Artsakh is called ‘secessionist’ or ‘independentist’, I respond by asking whether there is a single country that wasn’t formed out of a process of secession or proclaiming independence. A state declares itself, and if you take it from an international legal perspective, all you need to be considered for legal statehood is to comply with the three main criteria: to have a permanent population; defined territorial boundaries; and a state administration capable of entering into agreements with other states. Based on those requirements, we maintain that the Republic of Artsakh deserves to be internationally recognized as a sovereign state. Our goal is to have the fact properly acknowledged.”

He also pointed out that the main barrier to achieving that goal is the lack of full-fledged diplomatic relations between the United States and the Republic of Artsakh—an obvious source of frustration. But that doesn’t seem to daunt Avetisyan, who is always exploring ways to keep Artsakh on the American agenda.

The longer the conflict lasts, he observed, the more hostile Azerbaijan becomes towards Artsakh. The most recent example was the April 2016 full-scale attack on the Azeri-Artsakh border. Managing the world’s reaction to those events is a function of how well Avetisyan can make Artsakh’s position clear. “Our intention is to help the negotiators and everyone else who wants peace to understand that Artsakh is looking for solutions that will benefit all the people in the region,” he explained.

As the representative to both the United States and Canada, Avetisyan appreciates the differences the two nations play in the recognition process, stating that each requires a separate set of resources and strategies, but that, at the end of the day, “both Canada and the United States champion human rights and democracy. This facilitates our cooperation with the state structures and organizations. So we try to focus on these shared goals.”

With respect to Armenian communities on the continent, Avetisyan’s view is clear.  “As members of the same family, we cooperate with Armenian-American and Armenian-Canadian organizations to promote common issues. The freedom and security of the Republic of Artsakh are high on the pan-Armenian agenda. We are blessed to have supporters in practically every major country in the world, including in the United States and in Canada.”

A priority towards achieving that shared goal is making sure the diaspora actively takes part in Artsakh’s economic and cultural life. As an example, he praised AGBU’s involvement in helping to lay foundations for the future of Artsakh. “Education is one of the most important spheres for our nation, and we are happy to see AGBU’s continued and enhanced presence in our republic with educational initiatives, cultural programs.” Emphasizing the importance of education and how it directly impacts so many aspects of nation building, including healthcare and statehood, Avetisyan added that Artsakh knows it “can rely on AGBU to tackle crucial aspects of our society’s development. I personally also felt that support for which I am very grateful.”

It’s my job to ensure that questions about the processes in and around our republic are clarified so that Artsakh is acknowledged as a country in its own right.

He also mentioned Artsakh’s government’s and AGBU’s joint projects in the agriculture sector and their support of the republic’s rural population. “You can’t overestimate the importance of AGBU in Artsakh’s success story,” he remarked.

Adding to his own educational background is the accumulated real-world experience that informs Avetisyan’s multi-dimensional strategy for success. “The independence of Artsakh starts and ends in Artsakh. We will continue strengthening as a state capable of protecting our borders, providing economic prosperity, and providing all the human rights and liberties that were at the core of the Artsakh liberation movement.” He concluded by stating that he will “do whatever we can to come closer the day when it will be impossible for the rest of the world to deny that the Republic of Artsakh is a free and independent state.” It is this conviction that compels Avetisyan to advise aspiring diplomats, both in Artsakh and in general to “always remain unconditionally patriotic toward your homeland and ask yourself every day what you can do to better serve your own people and nation.”

Old enough to remember the darkest years of the Artsakh liberation struggle, Avetisyan is still young enough to embody the aspirations of the next generation emerging during a time of relative political equilibrium, which has given the country the breathing space to attend to other critical matters of capacity and nation building. Naturally, the hopes and dreams of Artsakh’s youth go beyond national security issues alone. This puts added responsibility on Avetisyan’s shoulders—to help ensure that the next generation is given opportunities to compete and shine, both at home and abroad.

Standing tall and confident in the power center of the western world, exercising his political acumen and unapologetic pride in his people and their cause, Robert Avetisyan is the personification of that hope.

General surgeon Dr. Federico Keten is at the forefront of emerging medical technologies to reduce the burden of cancer in Argentina
END_OF_DOCUMENT_TOKEN_TO_BE_REPLACED