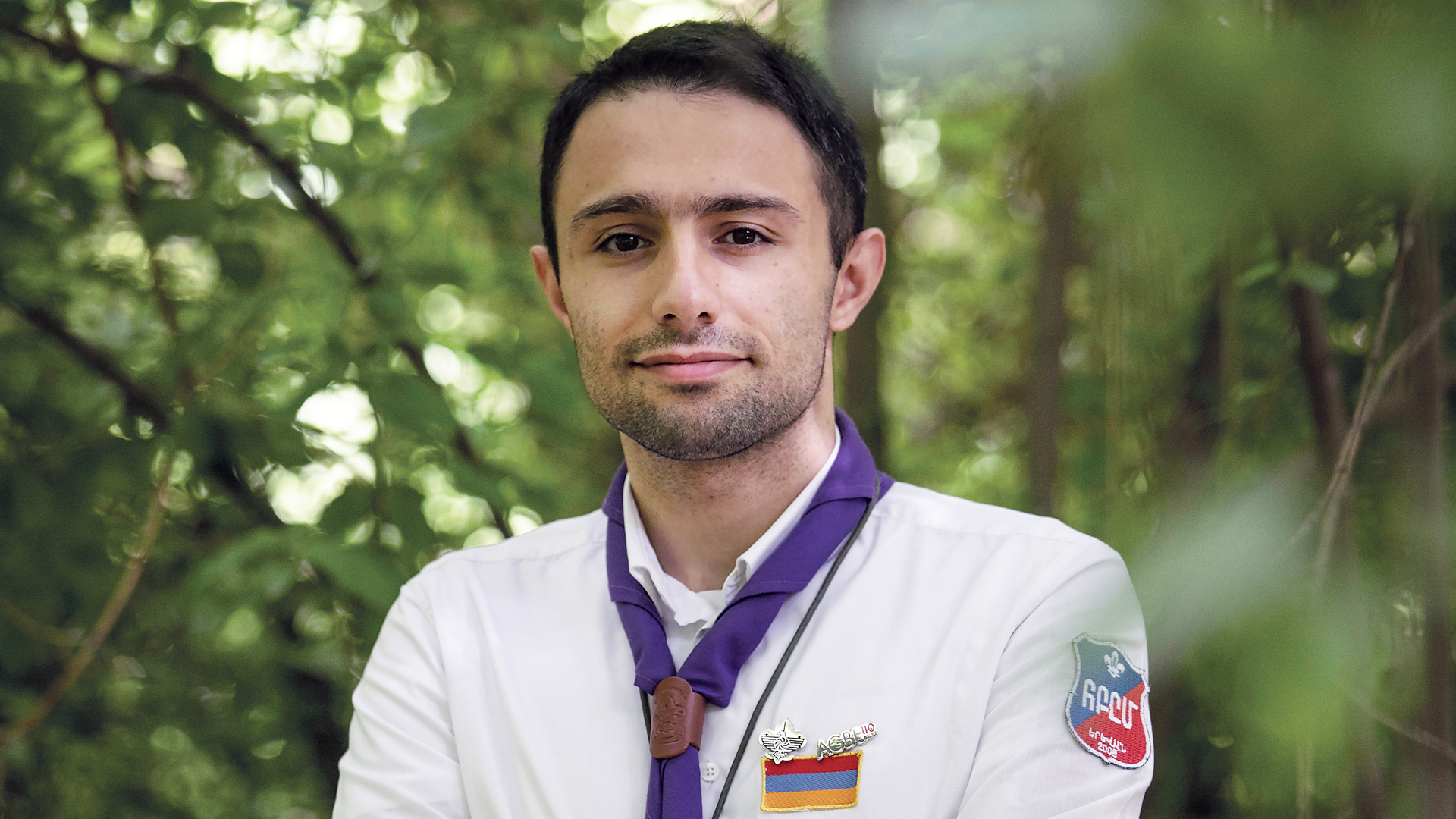 
Saro Tatios is living proof of the old saying that age is a state of mind. Full of the same energy and enthusiasm he felt as an AGBU scout in his own youth, in his role as the council chairman and the Chief Executive of AGBU Scouts in Yerevan, Saro wakes up each day on a mission to awaken that same sense of curiosity and adventure in the youth of Armenia. His perspective is simple: “Scouting is a discipline, it’s a way of life.”

Born and raised in Aleppo, Syria, Saro can’t recall a time when he wasn’t passionate about scouting. He participated in his first scout group at the Mkhitarist school when he was just three years old. As he grew older, learning how to master outdoor survival and safety skills and earn merit badges along the way provided him with a sense of achievement and pride he found more exciting than any lesson inside a classroom. At thirteen, he remembers the excitement of joining AGBU’s Armenian Youth Association (AYA) Scout Program. “When I saw what it stood for, I was hooked. It was pure, it was clear, and I didn’t want to be affiliated with a political group. I just wanted to be able to help people without judging their views. So this was the scout troop for me. We do our duty to God, our country and our people. That is the oath to which all AGBU Scouts pledge.”

The call of the wilderness, camping under the stars and being surrounded by nature, attracts more than fifty million boys and girls around the world, who are part of an international scouting movement. Founded in 1907 by Robert Baden-Powell, the movement served as the model for the first Armenian Scout program that was established in 1931 in Lebanon as part of the AYA. Over the next few years, the Scouts program expanded to Syria and other countries with a significant Armenian diaspora. It eventually became part of AGBU, which sought to complement the work the organization was doing building much needed orphanages and schools, with a broad program of activities for Armenian children during the weekend as a way to promote the Armenian heritage and encourage children to become an active part of the Armenian community even when they weren’t in school.

We’re working towards a more inspired, active, ambitious, and confident youth in Armenia. That’s really the kind of change i think the country needs.

When he moved to Yerevan to pursue a Bachelor’s degree, he figured he would have to give up scouting to concentrate on his studies. He quickly realized however, just how much the worldwide movement meant to him. “I missed it too much, even after just two or three days, I couldn’t stay away.” He headed to AGBU’s headquarters in Yerevan where he says he found his calling in life. “If scouting is a way of life, then AGBU is a lifeline.”

By the time he turned 26, Saro was appointed Council Chairman and Chief Scout Executive of the AGBU Scouts program, one of the youngest Chairmen of a scouting group in the world. “It was thrilling and motivating for me,” he says, “because I was being honored and given a great responsibility. It drove me to give my best, to prove myself and prove to everyone that age really is a state of mind.”

His responsibilities are to coordinate the program’s daily activities, oversee the budget and organize trips, camps, hikes and other major events. The most popular of all of AGBU’s youth programs, he says the AGBU Scouts program provides an outlet for activity and exposure to nature to which many Armenian children would otherwise not be exposed. “For a lot of kids outside of city centers, there’s no sense of community. I’ll see them every Saturday and Sunday just hanging out in the street, when they should be having fun. We’re working towards a more inspired, active, ambitious and confident youth in Armenia. That’s really the kind of change I think the country needs.”

It’s a change Saro says he sees on the facial expressions of his young scouts every time they accomplish a goal they didn’t believe they were capable of, from reaching the summit of a steep mountain to successfully cooking for 50 people in a camp. “When I see that they’ve succeeded, that they didn’t lose the opportunity to do something, I’m happy. I love knowing that every contribution I make isn’t going to someone high-ranking. It’s going to the whole community.”

During his tenure as chairman, he developed an online version of the Merit Badge program, where scouts can earn many of the more than 150 merit badges online. The online program offers scouts the opportunity to study and learn at home, cutting down on instruction time during weekly gatherings so the children can be as active as possible. He also created a large database to list all of the scouts’ achievements. “Every mile, every kilometer, every summit they climbed, walked, visited, or every skill they mastered. At the end of the year, I tell them for example, that this year you’ve climbed a total of 2000 meters and learned 10 new skills. They feel a sense of achievement.”

Always seeking to improve upon the program’s successes, Saro Tatios has high hopes for the future as he remembers how AGBU Scouts informed his past. “As a scout in Syria, we always sang a song that said that wherever we go and wherever we camp, we will raise the flag of AGBU. My main goal is to raise it on Mount Ararat. I hope we will achieve it someday.”

General surgeon Dr. Federico Keten is at the forefront of emerging medical technologies to reduce the burden of cancer in Argentina
END_OF_DOCUMENT_TOKEN_TO_BE_REPLACED