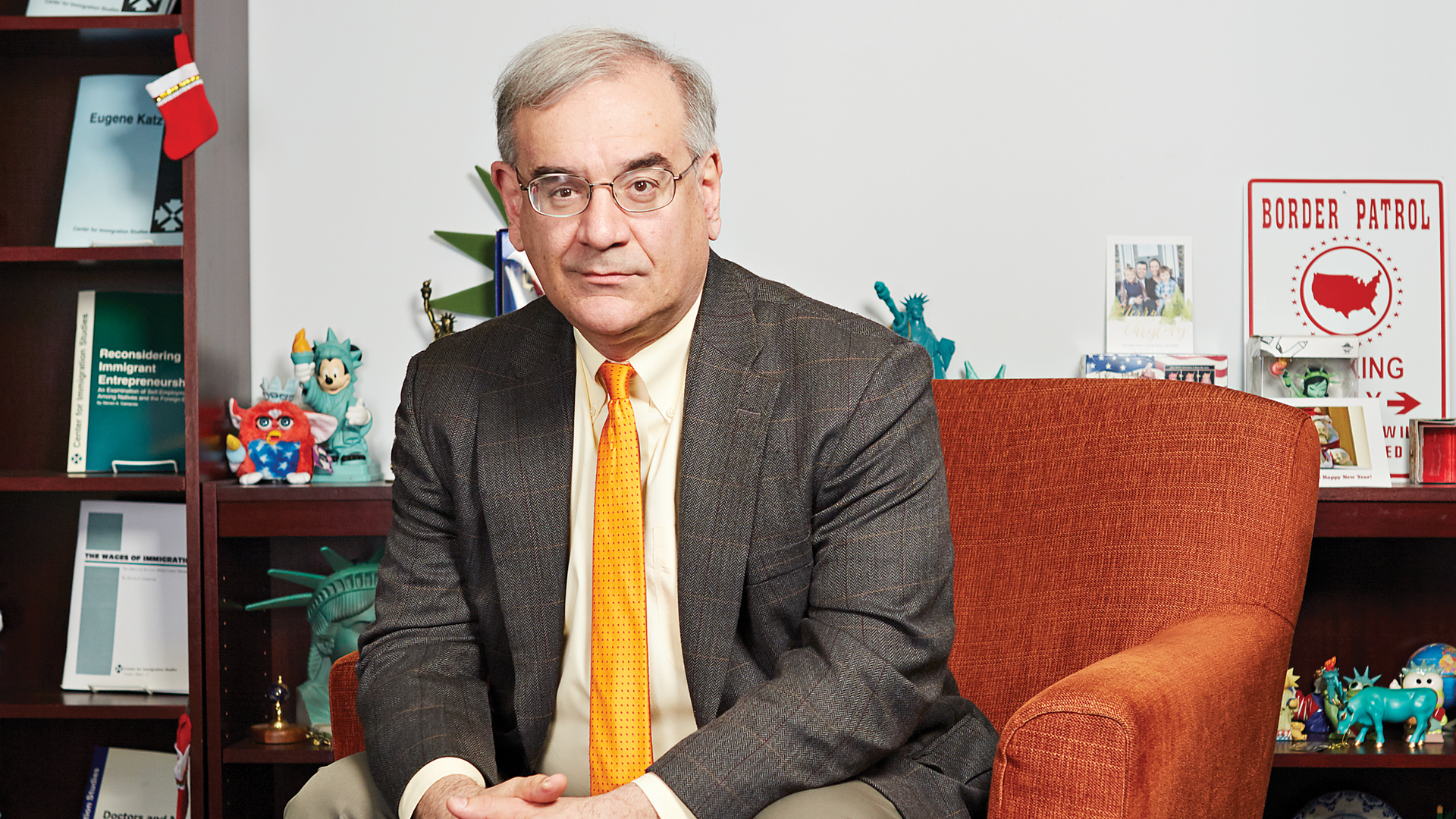 
Growing up, Mark Krikorian did not speak a word of English until kindergarten, having been raised only in Armenian by his parents. A contrarian by nature, Krikorian is today considered one of the leading intellectual architects of the movement against mass immigration. A nationally recognized expert on immigration issues and the executive director of the Washington D.C.-based Center for Immigration Studies (CIS) since 1995, his knowledge and expertise has been sought by the US Congress and numerous media outlets, including CNN, 60 Minutes, ABC, and National Public Radio, where he has attracted outspoken critics for supporting a stripped-down immigration system. Krikorian holds a master’s degree from the Fletcher School of Law and Diplomacy and a bachelor’s degree from Georgetown University. He is an AGBU Camp Nubar alumnus and the recipient of an AGBU scholarship.

Q The new US government is intent on overhauling immigration policy. Why, in your view, is there a need to scale back immigration levels?

A America has outgrown mass immigration. One hundred years ago when my Armenian grandparents came to the US, the economy was based primarily on farming and manufacturing in which people with relatively little education had a real shot at upward mobility. Today we have a knowledge-based, information-intensive economy where, yes immigrants can find jobs no question, but the opportunities to excel and catch up with other Americans have largely disappeared. With 320 million people stretched across the United States today, we don’t necessarily need more people. But if we continue to take in 1 million legal immigrants each year, we will see increased crowding, sprawl, oversized classrooms and a wider gap between rich and poor that will stress our economy and social institutions, unnecessarily diminishing the quality of life for both Americans and immigrants.

Q How would you define the right balance?

A My basic premise is that we limit immigration to the most compelling or moral cases—husbands, wives and minor
children of American citizens, a handful of ultra-qualified ‘Einsteins,’ if you will, and refugees who truly have no other options—that would reduce by half the one million people who move here every year as legal immigrants.

Q How would slowing down the flow of immigrants benefit immigrant communities that are already established?

A By only accepting fewer newcomers, and only people whom we intend to become full American citizens (and not, for example, so many temporary guest workers), we would have more resources to provide people the tools they need to succeed, such as a mastery of English. Having less immigration tomorrow actually helps the immigrants who came in yesterday because they are the ones most directly in competition for jobs. Last year’s stock of immigrants loses the ability to demand better wages and working conditions if another million immigrants arrive this year and are willing to settle for less.

Q With regards to refugees, given the devastating conflict in Syria, is there not a strong moral case to be made for the United States to accept more refugees, not less?

A The amount of money required to take care of one Syrian here can, according to the United Nations, support 12 refugees in the countries where they have sought refuge, mainly Turkey, Jordan and Lebanon. We do have an obligation to ensure that the money we spend on refugee protection helps the largest number of people, but moving one person to Sioux City, Iowa instead of taking care of 12 Syrians in Turkey or 12 Somalians in Kenya, that’s morally wrong. The metaphor I use is this: why feed one hungry person caviar when you can feed 12 people rice and beans? There’s no moral justification there.

Q What impact has Western immigration in the past several decades had on Armenians in Armenia and in the Middle East?

A We all know many great people from Armenia, Syria, Lebanon and elsewhere who have come here because of loose US immigration policies. Some are friends of mine, and I criticize no individual’s decision. But is it good for the Armenian people to continue a US government policy that encourages even more of this in the future? When you look at the big picture, American mass immigration is draining away talented, energetic young people from the Republic of Armenia and from Armenian communities in the Middle East. That inevitably weakens Armenian identity in the long term because assimilation of those immigrants’ children and grandchildren is unavoidable. Fewer opportunities to emigrate to the US will translate into more Armenians staying more Armenian in the Middle East longer, and that from an Armenian perspective seems to me to be an important goal.

Q What current projects are you working on?

A I continue to be focused on the costs of immigration and how best to manage it, but that work is a lot more urgent now that we have a new administration that is interested in at least some of what we have to say. I am also a deacon at St. Mary’s Armenian Apostolic Church in Washington D.C., a passion that grew out of a two-year stint in Armenia in the 1980s as a student where I audited courses at Etchmiadzin, before the Communists found out and made me stop.

Advocating for others with Jerry Misk
END_OF_DOCUMENT_TOKEN_TO_BE_REPLACED

For Solange Merdinian, sharing her heritage on stage is an opportunity and a joy
END_OF_DOCUMENT_TOKEN_TO_BE_REPLACED