Genuinely beloved poet and performer, Charles Aznavour passed away at his home in Mouriès, France on October 1, 2018. At 94 years old, he was fresh off a tour in Japan, vowing to live a century and perform until then. “I will continue to perform on stage as long as my heart beats,” he laughed in our last interview with him in AGBU News Magazine (August 2018). The truth is, he spent more of his life on stage than anywhere else, enchanting audiences with his lyricism and indelible talent for inhabiting the many characters of his songs.

Quintessentially French, Aznavour teased the French language to celebratory heights and melancholic depths, creating anthems and ballads alike. He was fearless, using his poetry to expose the most tender tenets of the human condition, writing of prejudice, despair and redemption. Authoring 1,300 songs, selling 180 million records, he was a living testament to the grandeur of French art and showmanship through generations. As revered as he was in France, he was equally so in Armenia and by Armenians worldwide.

A public memorial for a national idol

After the French Ministry of Culture announced his death, Aznavour’s voice drifted through the streets of Paris, inspiring tributes throughout France, as the Eiffel Tower stood illuminated in his honor. On October 5, a state funeral at Les Invalides Military Complex in Paris was organized by the French government. President Emmanuel Macron and Prime Minister Édouard Philippe were joined by former presidents Nicolas Sarkozy and Francois Hollande. President Armen Sarkissian, Prime Minister Nikol Pashinyan and His Holiness Karekin II, Catholicos of All Armenians, along with dozens of other dignitaries, were also present to express their condolences.

State funerals at Les Invalides, the final resting place of Napoleon I and other high-ranking military officials, are reserved for France’s greatest heroes. Draped in the French tricolor, with a wreath of the Armenian tricolor steps away, Aznavour’s casket was carried into the middle of the complex, accompanied by the sounds of the duduk. Pashinyan was first to approach the podium and eulogize Aznavour, who had voiced his support for the Velvet Revolution, eager to see Armenian democracy thriving. “This is a universal loss because Charles Aznavour shaped not only national, but universal values,” Pashinyan declared. “These values warm people’s hearts and will guide humankind toward love and solidarity for centuries to come.”

When it was time for Macron to speak, he inherited Aznavour’s poetic cadence as he said, “For so many decades, he has made our life sweeter, our tears less bitter.” He praised his words as “a balm, a remedy, a comfort” for millions of people, acknowledging how Aznavour recognized the French language as a refuge, “a catalyst for freedom and hope.” Just before the procession continued with Aznavour’s own “Emmenez-Moi” (Take Me Away), Macron assured the crowd, and the rest of the world in mourning, “He will never leave us, because in France, poets never die.”

A private farewell to a son of Armenia

The following day, far from the public eye, Aznavour was laid to rest in his family crypt in Montfort l’Amaury Cemetery at a private ceremony of a hundred people. Eulogizing him in a service at the Saint John the Baptist Armenian Cathedral, was His Holiness Karekin II, Catholicos of All Armenians. “Charles Aznavour was entirely inspired by his art, by his enthusiasm to create, without which, he repeatedly testified, he could not live,” His Holiness reflected. “In his art, he revealed the beauty and majesty of our shared humanity.”

Aznavour married Ulla Thorsell at the same church in 1967 and she chose to gather their closest family and friends there in honor of their life together. They were joined by President Sarkissian and Prime Minister Pashinyan and their wives, along with dignitaries from Armenia and the Armenian community of France. The entire ceremony was conducted in Armenian, save for “Ave Maria,” which Aznavour loved to sing.

With the blessings of two nations, and the tributes from every corner of the world, Aznavour stands immortalized on a stage he built himself, with nearly nine decades of poetry and music. From Paris to Yerevan, his voice will surely echo on.

From Humble Origins to International Renown

Aznavour was born Chahnour Vaghenagh Aznavourian, the son of Armenian refugees and artists. When speaking on his dual identity, he explained, “I often say that I am like coffee with milk, once mixed you cannot separate the two.” Both French and Armenian, he used his unique perspective to navigate the world artistically, socially and politically, always promoting strength in unity.

Aznavour was not only an artist that crossed seas and transcended borders, he was an activist and a diplomat. During the Nazi occupation of France in World War II, his family sheltered persecuted people in their home, becoming closely linked to resistance groups of the time. When tragedy struck Armenia in 1988, Aznavour organized to support relief efforts through the country. For three decades he never ceased his humanitarian actions in Armenia which will be pursued by the Aznavour Foundation (www.aznavourfoundation.org).

His activism maintained his reputation as an ambasssador, a loyal citizen, and a man of two nations, claiming two cultures as his own. National Hero of Armenia and Commander of the French Legion of Honor, Aznavour personified a Diasporic consciousness. In life, he moved through the world as a Frenchman and as an Armenian. In death, he was honored as both. 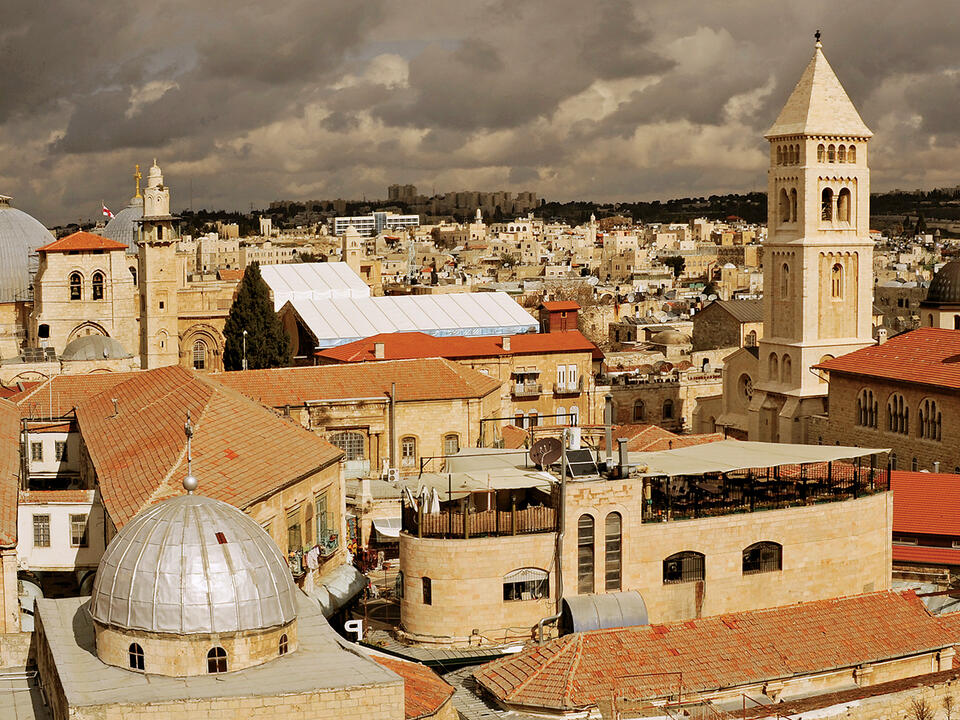 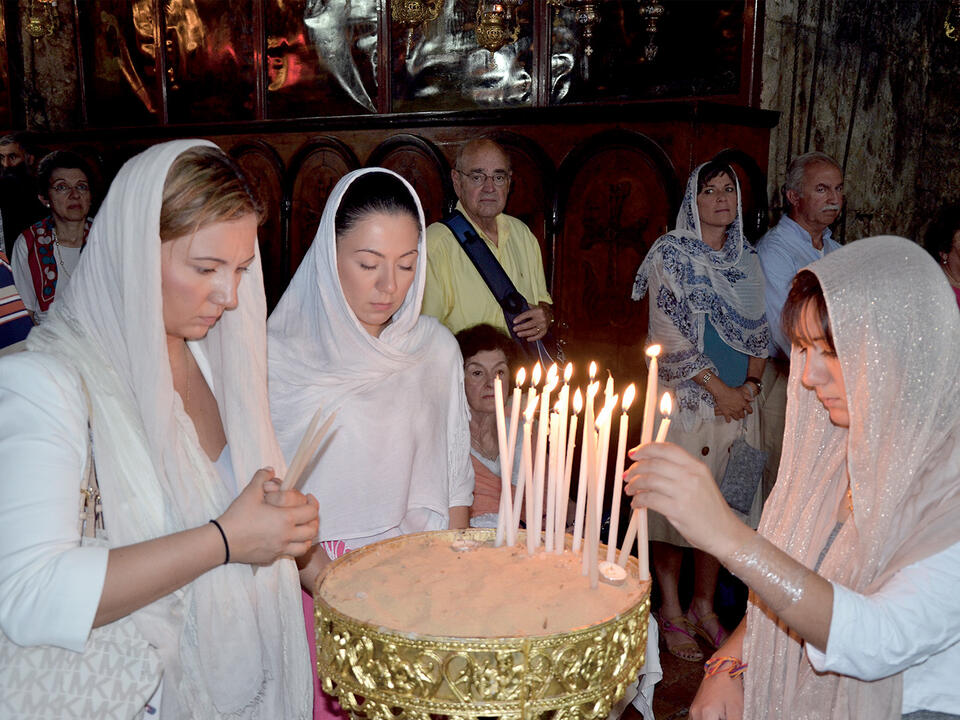 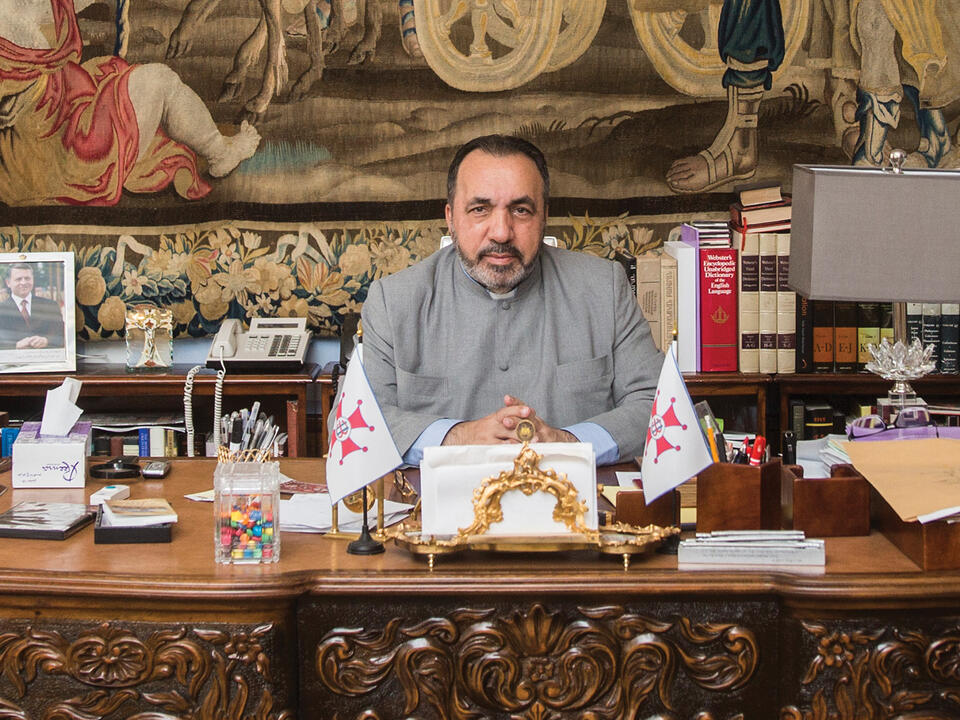 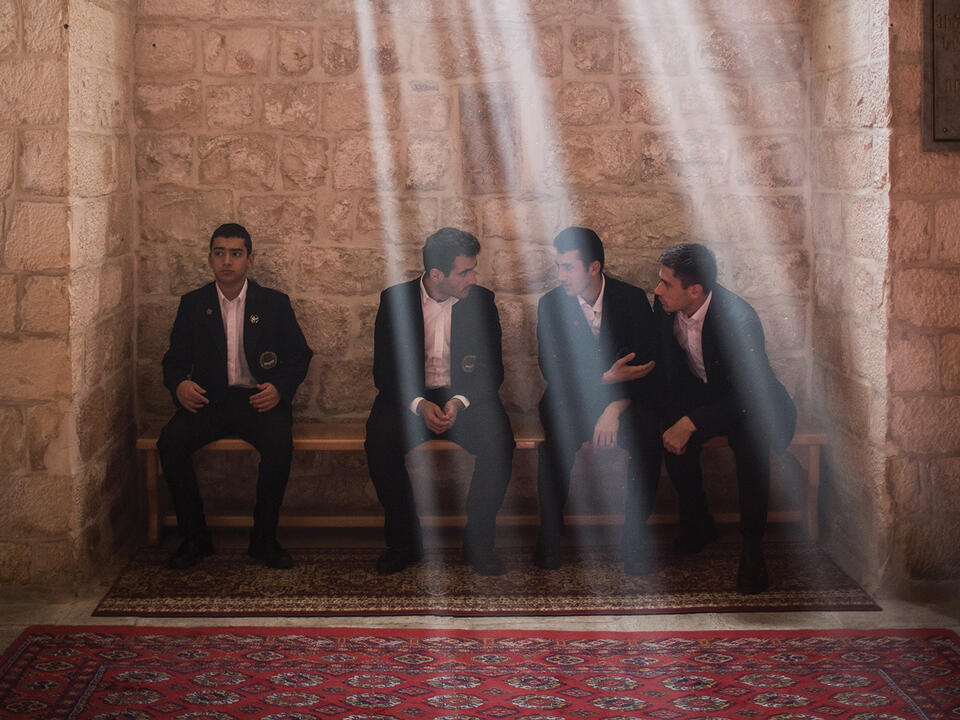 Dwindling in number but bonded by a strong sense of community, Jerusalem Armenians make the best of their uncertain future
END_OF_DOCUMENT_TOKEN_TO_BE_REPLACED 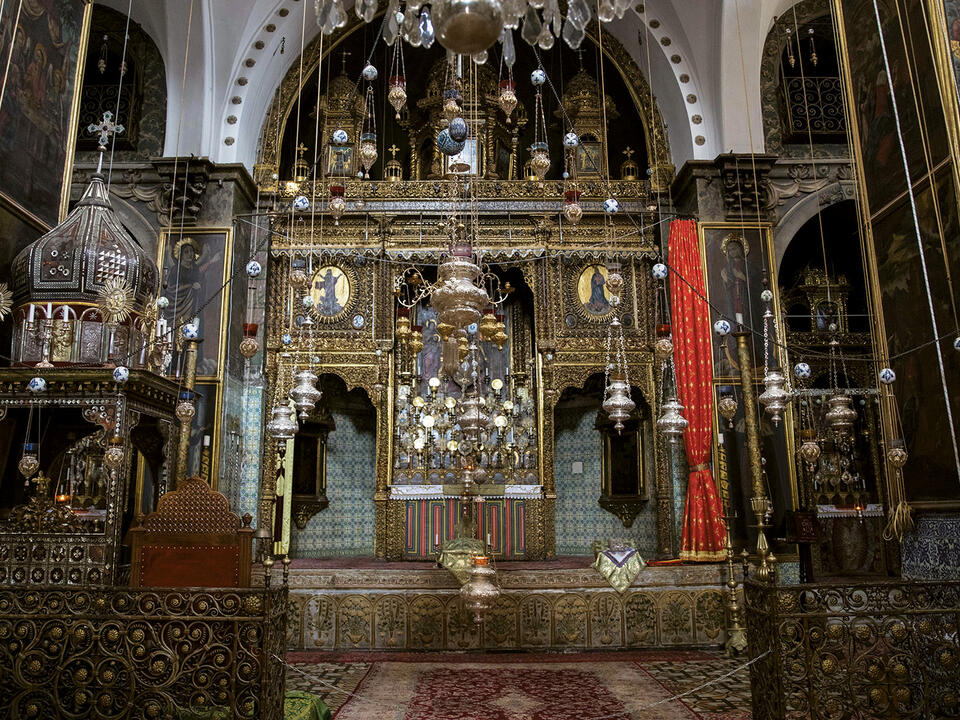 St. James Cathedral inspires awe in all who enter its otherworldly realm
END_OF_DOCUMENT_TOKEN_TO_BE_REPLACED 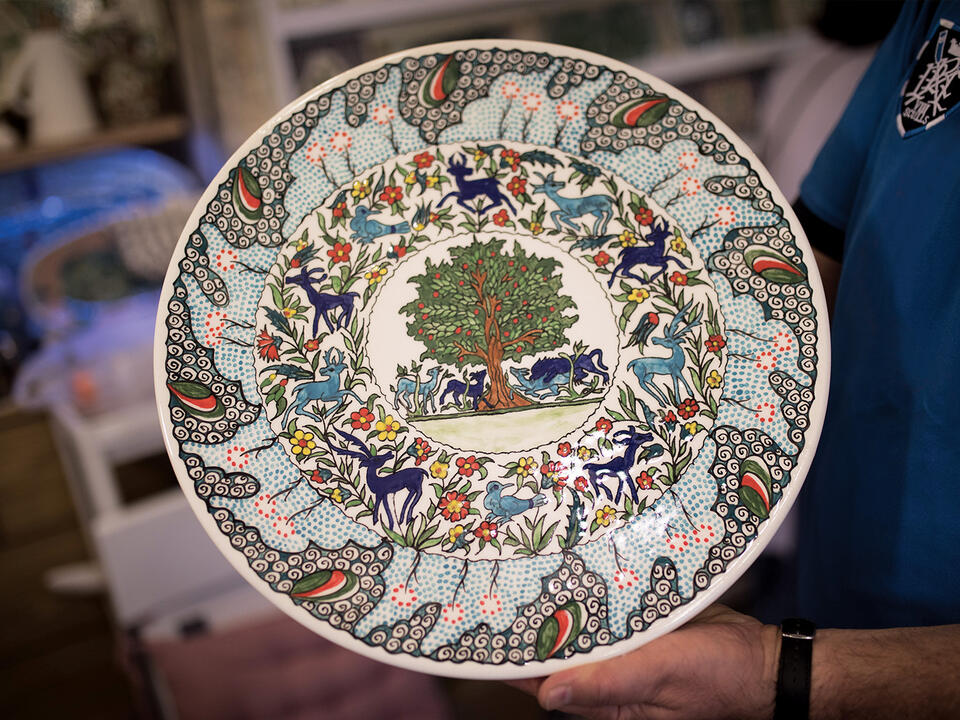 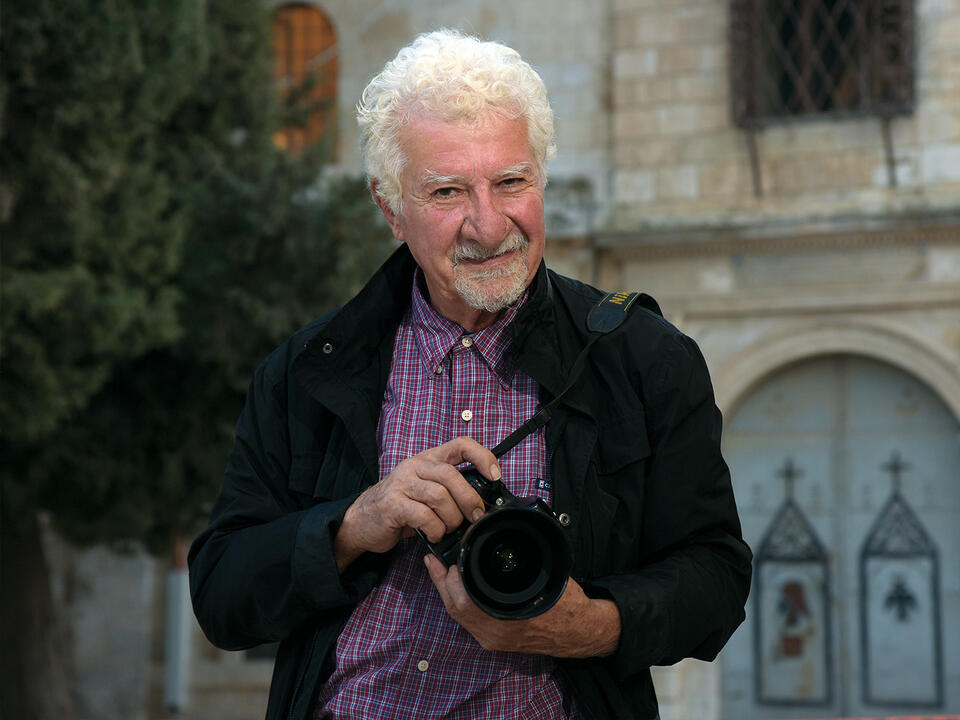 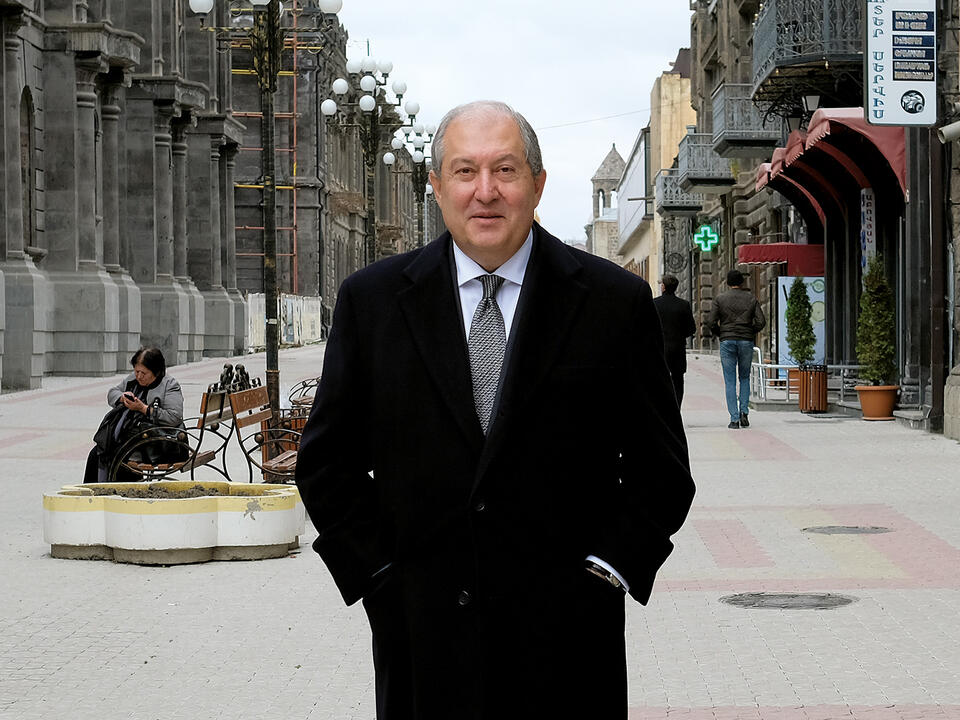 An Open Letter to Gyumri from Armen Sarkissian, President of Armenia
END_OF_DOCUMENT_TOKEN_TO_BE_REPLACED 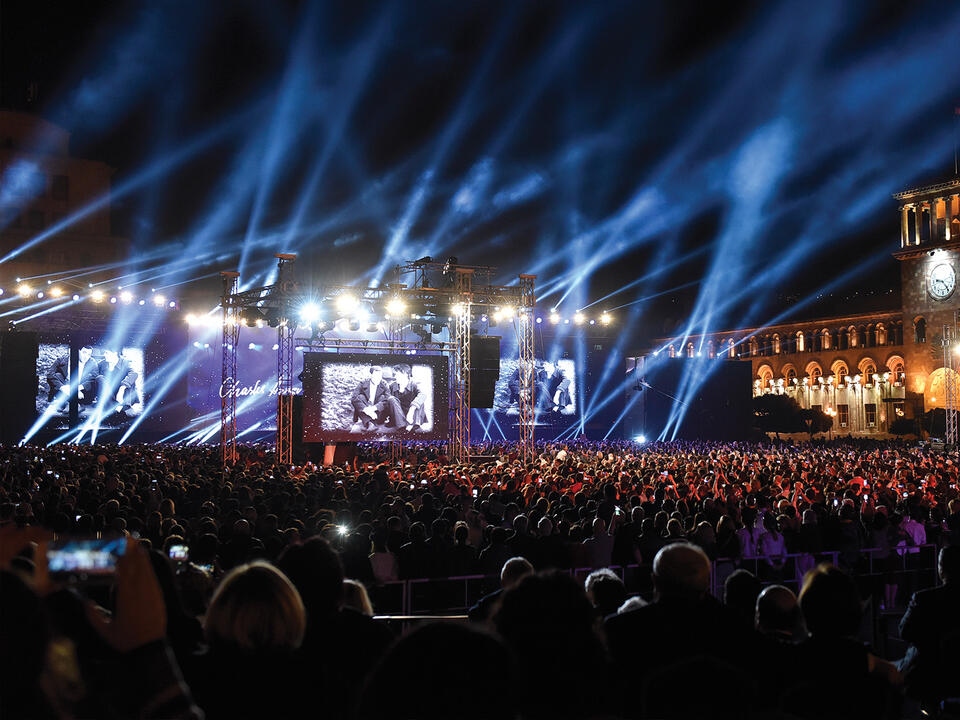 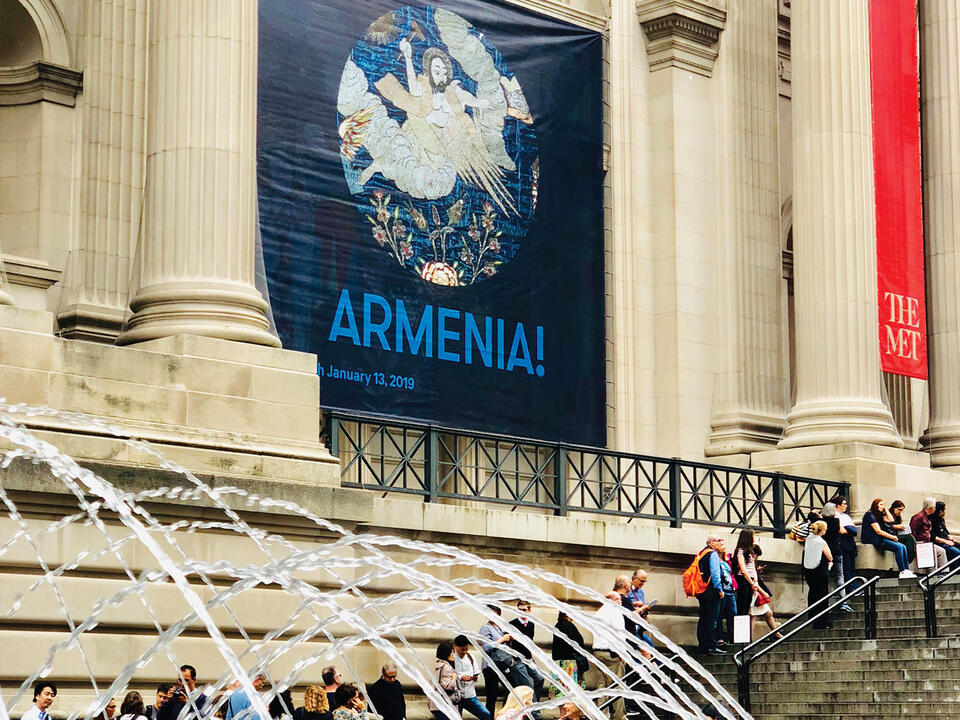 Armenia! at the Met disrupts established views on the Ancient World
END_OF_DOCUMENT_TOKEN_TO_BE_REPLACED 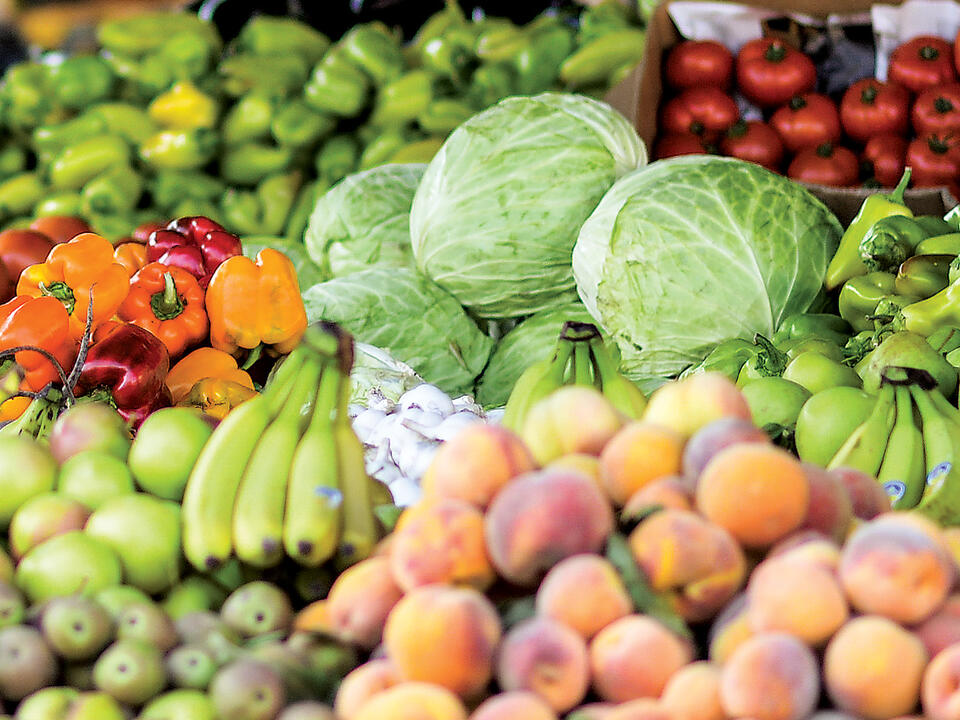 Transforming a war-ravaged economy into a land of plenty
END_OF_DOCUMENT_TOKEN_TO_BE_REPLACED 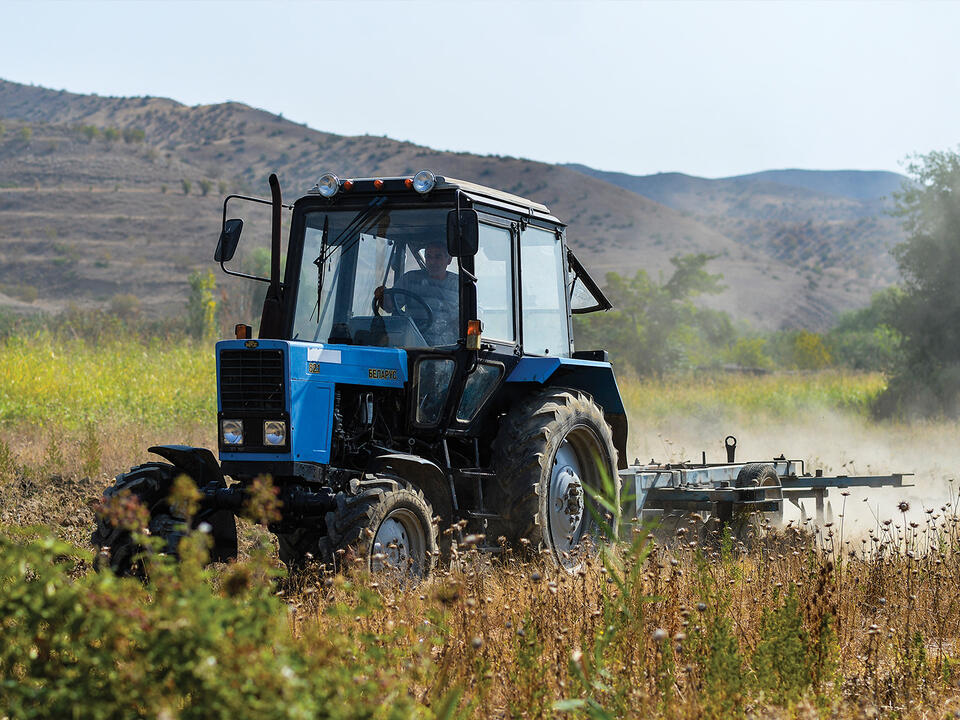 A new class of independent farmers, horticulturalists and agronomists are on the front lines of Artsakh’s agricultural rebirth. Here are the stories and shared wisdom of three of them.
END_OF_DOCUMENT_TOKEN_TO_BE_REPLACED