In the fall of 2020, Armenia and Azerbaijan locked horns over the fate of the breakaway region of Nagorno-Karabakh for the third time in the 30 years since the collapse of the Soviet Union. The intense fighting left thousands of Armenian servicemen dead and forced many more civilians out of their homes, dispossessing them of all their belongings and ushering in yet another humanitarian crisis in the region. Among them are countless children who were not only uprooted from their nests way too soon, but also suffered the blows of losing a parent or sibling. Others saw a loved one come home in a wheelchair or with a prosthesis, sometimes physically disfigured, severely disabled and returning with mental health and emotional scars. A number of these youth live in limbo not knowing if a missing family member will ever return.

This is why the following summer, AGBU launched a new concept in healing traumatized children with the opening of AGBU Camp Nairi. In August 2021, the full room and board sleepaway camp for children aged 7 to 13 accommo-dated a total of 200 children in two sessions of 100 campers. They enjoyed all the benefits of a pastoral setting away from the horrors of war and chaos, while receiving the care that would help heal their bruised psyches.

Confronted with the need to mitigate the trauma of a new generation of children of war, AGBU set out in April 2021 to bring to fruition the concept of a hybrid summer camp and healing retreat, complete with therapeutic specialists and a full program of outdoor and indoor activities.

Fortunately, they had a proven expert in their midst—seasoned youth programs creator and Director of AGBU Colonie de Vacances and AGBU Discover Armenia Herminé Duzian. Tasked with the responsibility of establishing the camp in as little as five months, the first order of business was identifying the children who would qualify and then meet with their parents to invite them to entrust their children to people they did not know, at a time when they were actively grieving the loss of their husbands or sons.

Spread across an impressive 25 acres of pristine land at the foot of the picturesque mountains of Hankavan to Armenia’s north, the complex housed an assortment of buildings featuring three dormitories, a refectory for 350 people, an infirmary with a round-the-clock medic on site and all manner of other comforts fitting of a European-class camp. With its soccer fields, outdoor swimming pool, basketball court and open-air amphitheater, the camp offered a perfect setting for an array of recreational, sports and cultural activities to distract the children from their ills at home and set them on the path to recovery.

The staff comprised a 12-person team of highly-educated camp leaders from some of the best universities in Armenia and Artsakh, who were trained before-hand to prepare them for the complexities that lay ahead. Instructors from the Mother See of Holy Etchmiadzin-AGBU Youth Centers were also on board to run dance and pottery classes and other child-friendly activities conducive to personal self-expression.

With a whole building all to itself, Camp Nairi welcomed children from Armenia and Artsakh, including from territories since conceded to Azerbaijan. The groups of 100 per session were further organized by age and gender.

Not All Fun and Games

Alongside the joy and laughter of the afternoon sports and games, the camp personnel had to contend with the frequent nighttime calls for help that left many in disarray among the leaders and camp management on what to do. Even for Duzian, “this was by far the most challenging camp session I’ve ever had to manage,” she admitted.

During this process, it also became clear that the state of mind of the children’s mothers had a significant influence on the child’s emotional well-being. Already during the admissions phase, the experience of meeting hundreds of children and their mothers or grand-parents—“never the fathers”—flocking into the AGBU Armenia office, each with their story of loss and trauma, exacted a heavy psychological toll on Duzian. “There was even a time I thought I wouldn’t pull through. Nothing could have prepared me for this,” she explained, wiping a silent tear.

Of the many stories of destitution and loss witnessed at the camp where some children from poorer families refrained from taking full advantage of the abundance of food available to them for fear of missing such luxury once back home, Duzian remembers one child, Abraham, the eight-year-old proud champion of Camp Nairi’s very own Olympic Games. His father, Zohrab, 36, a 10-year contractor with the Armenian Army, was killed by a missile explosion while evacuating a fellow serviceman from the frontline in the high mountains of Kelbajar to the north of Artsakh. That region was later willingly signed off to Azerbaijan as part of a Moscow-brokered ceasefire agreement that ended hostilities in November 2020.

Abraham’s mother Haykuhi Harut-yunyan, 35, still recalls her son’s sweat-soaked nightmares after feeling his father’s cold body at his wake. When she heard about Camp Nairi, she conferred with her first born and only son. “I agreed to let him go,” says Harutyunyan. “I knew he needed it and that they’d take good care of him there.”

Following the advice of AGBU Central Board members, Duzian called on the services of two diasporan psychologists and a representative of the Armenian Church to work in tandem on restoring the children’s faith in a life after trauma.

Keghani Mardikian, a repatriate from Canada with over 10 years of experience working with refugees suffering from PTSD, was one of two to answer the call. Anna Baronian, a Licensed Clinical Social Worker based out of Pasadena, CA, quickly followed suit.

Working free of charge, both experts spent up to six hours a day with all three age groups at the camp, making a “critical” emotional and financial investment into the psychological wellbeing of the children, according to Duzian.

One of many exercises used by Mardikian and Baronian to help the kids externalize their feelings involved having them color in hearts with the pencil that best conveyed their emotional state at the time. “Black was for fear. Blue was for grief. You also had red for anger, yellow for joy and a range of other colors for the vast panoply of emotions experienced by the children,” explained Mardikian.

It was clear to us that the children had been taught by their parents to hide and even to repress their emotions. By creating a safe and trusting environment, they learned how to acknowledge and cope with these and were even able to make sense of the sacrifice made by their fathers and brothers.

During the first few sessions, most of the hearts came out black or blue. With time and a daily dose of group and individual therapy sessions lasting up to two hours per age group, the picture changed. “It was clear to us that the children had been taught by their parents to hide and even to repress their emotions. By creating a safe and trusting environment, they learned how to acknowledge and cope with these and were even able to make sense of the sacrifice made by their fathers and brothers,” explained the Aleppo-born trauma expert, who had also spoken at the first of two Resilience Summits convened by AGBU in late February 2021.

However, Baronian, who specializes in child trauma, cautions that by doing so, “children may experience delayed expression of trauma symptoms and thus delay their own healing.” She also noted that they “verbalized their need for emotional support” and said that they found the therapeutic sessions a worthwhile experience because it helped equip them with coping mechanisms to manage feelings of anxiety, anger and grief from loss.

“With the priest, we talked a lot about death and God and my father,” tells little Abraham of his interactions with Father Ashot Safaryan. A graduate of the Theological Seminary of the Armenian Patriarchate of Jerusalem currently serving as pastor to one of the churches in Yerevan, as well as at Ayb, a leading school in the capital, Father Ashot “played a vital role in the spiritual healing of our little ones,” explained Duzian.

In their 10 days at Camp Nairi, the children also benefitted from surprise visits from a host of esteemed guests including: AGBU Armenia President Vasken Yacoubian; two Armenian ambassadors, one of whose children had previously attended AGBU’s summer camp in France and were now involved in Camp Nairi as leaders; and others. All brought heaps of gifts, snacks and sweets for the children to enjoy.

With part of the funds already available, work is underway for the second installment of “the best camp in Armenia” in the words of little Abraham.

Plans are also being drawn up to finance the work of psychologists who will continue to take charge of the mental support of those families hit hardest by the war. According to Duzian, “We served the children as best we could during the camp. But in order for that help to last, we must address the root cause of the problem. That means helping the mothers accept that although their husbands or one of their sons are gone, they still have their other child to be thankful for.” A food and clothing assistance program for the most impoverished is also in the pipeline.

For Abraham’s mom, whose every mention of her husband brings forward a fresh stream of tears and who still suffers from stress-induced neurosis in the wake of his death, AGBU’s upcoming programs are a source of hope. “As someone who needs psychological assistance just as much as my son, I’d be more than happy to take advantage of these initiatives,” she said. 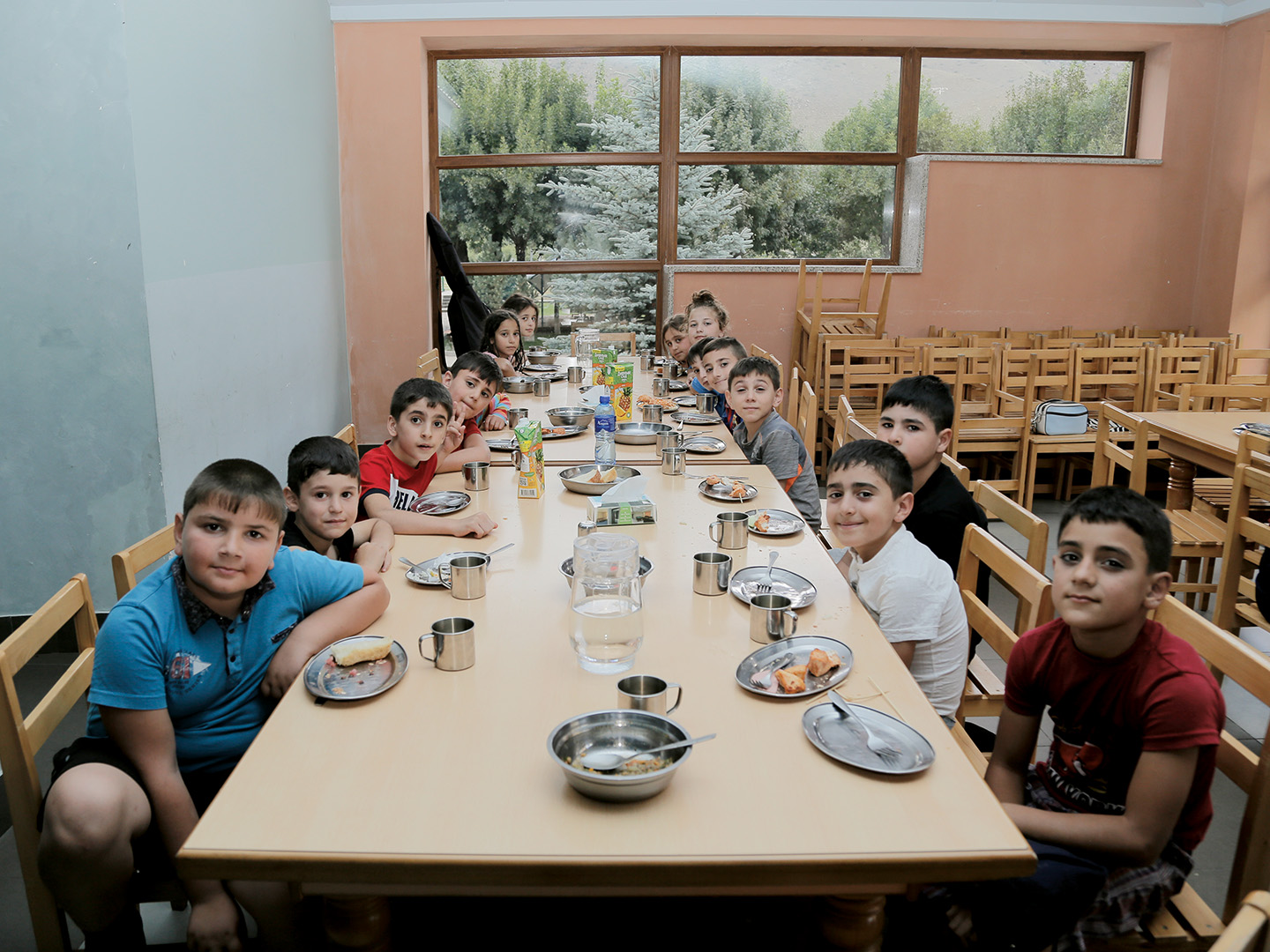 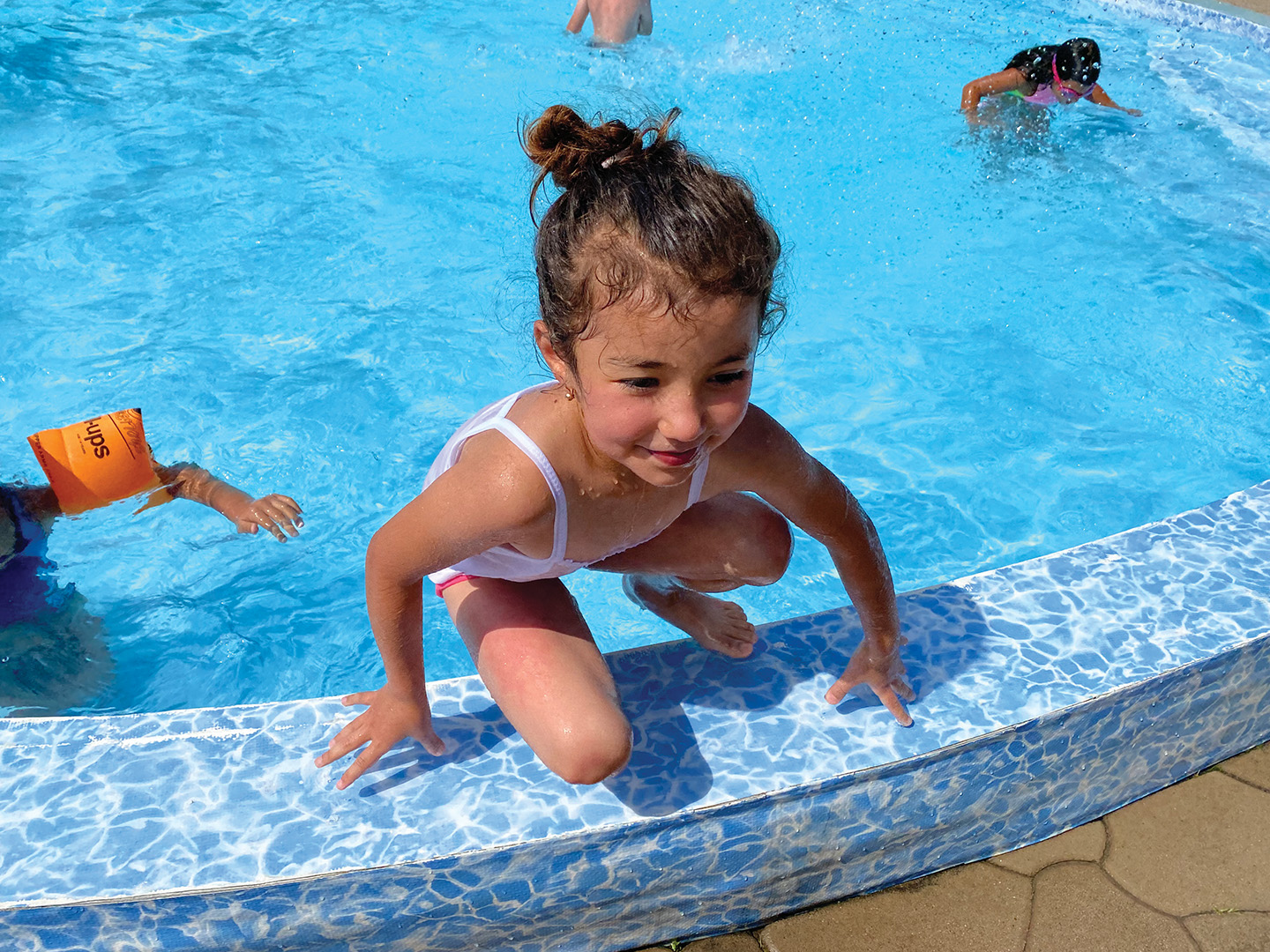 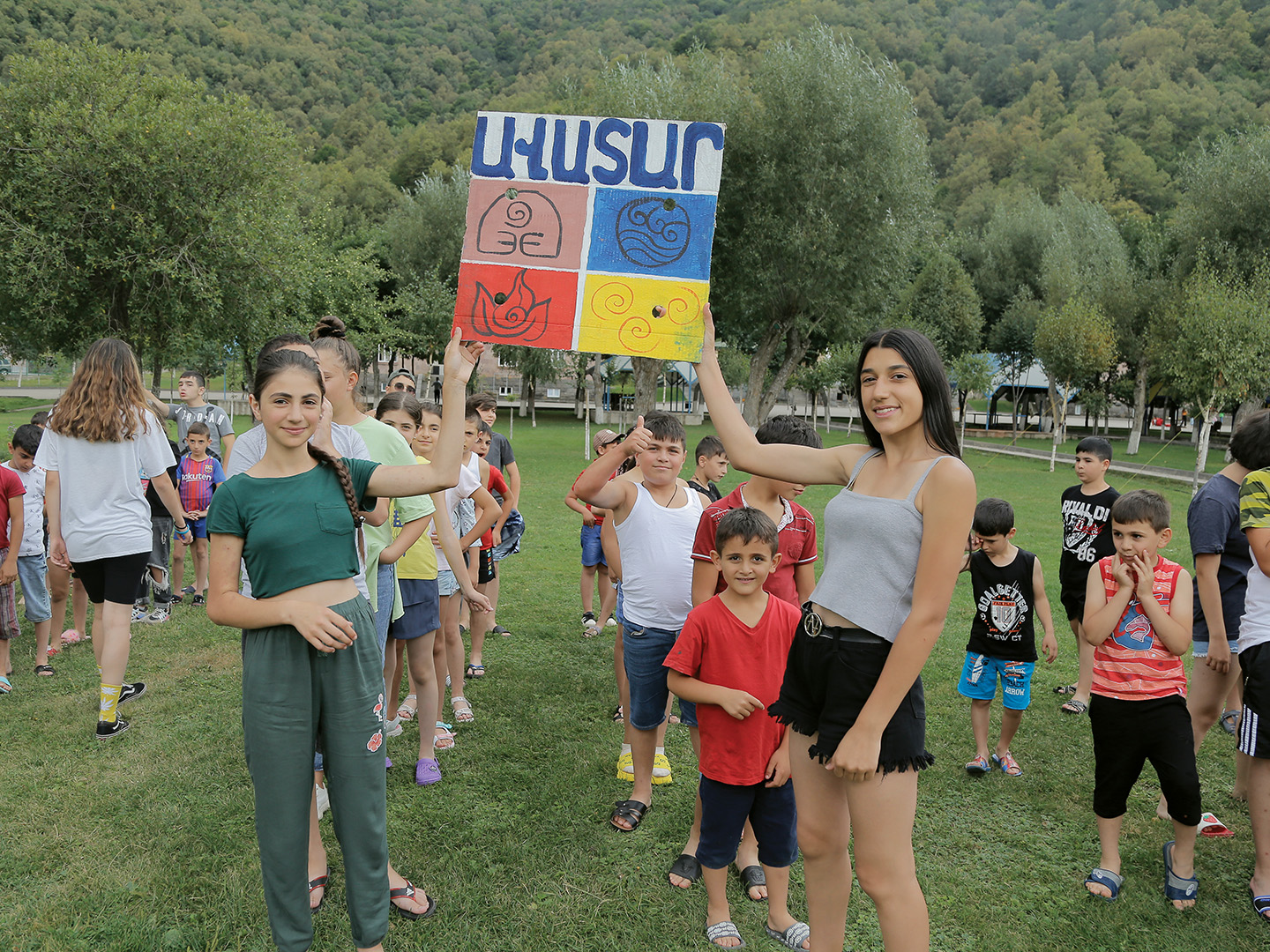 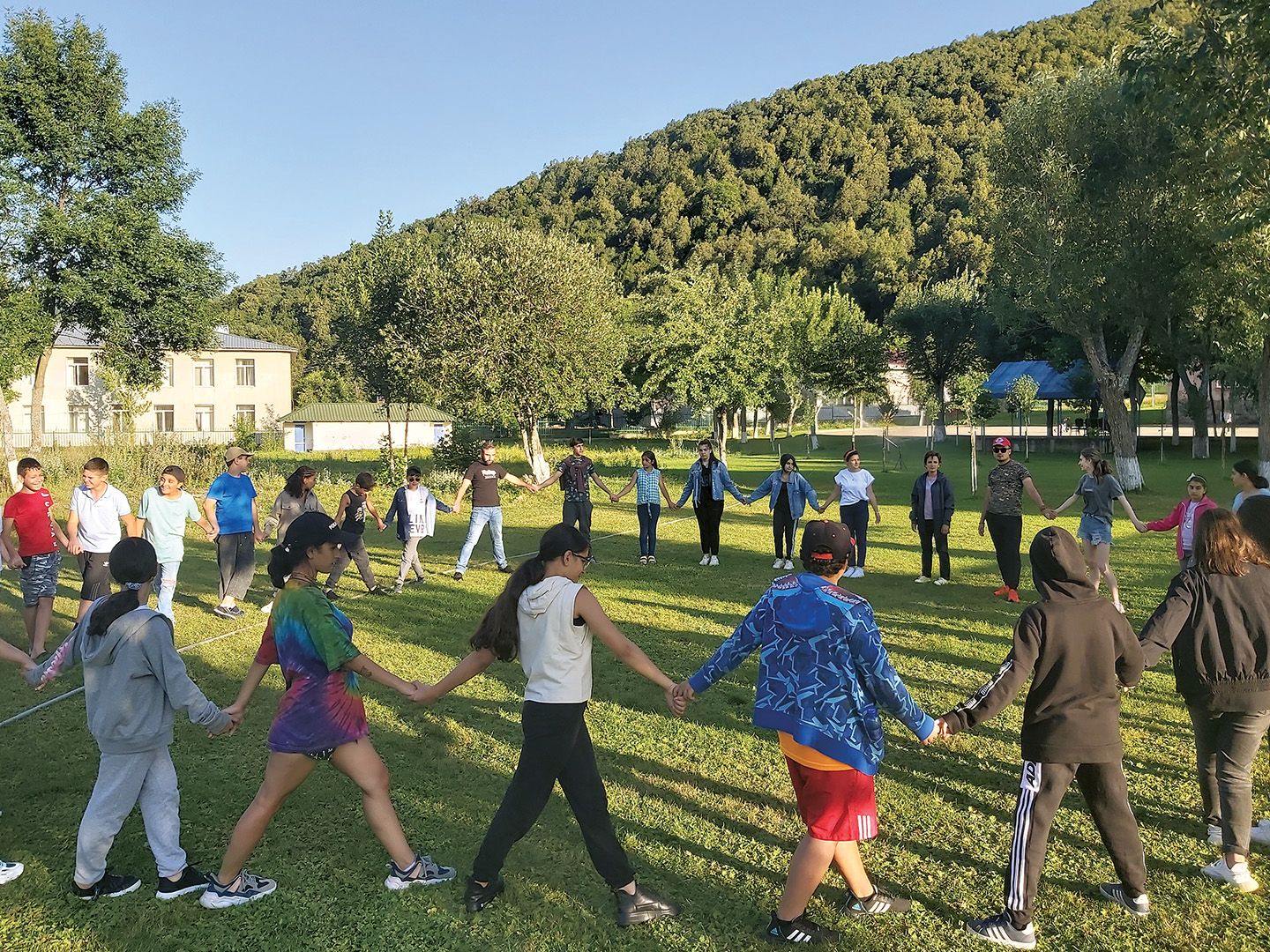 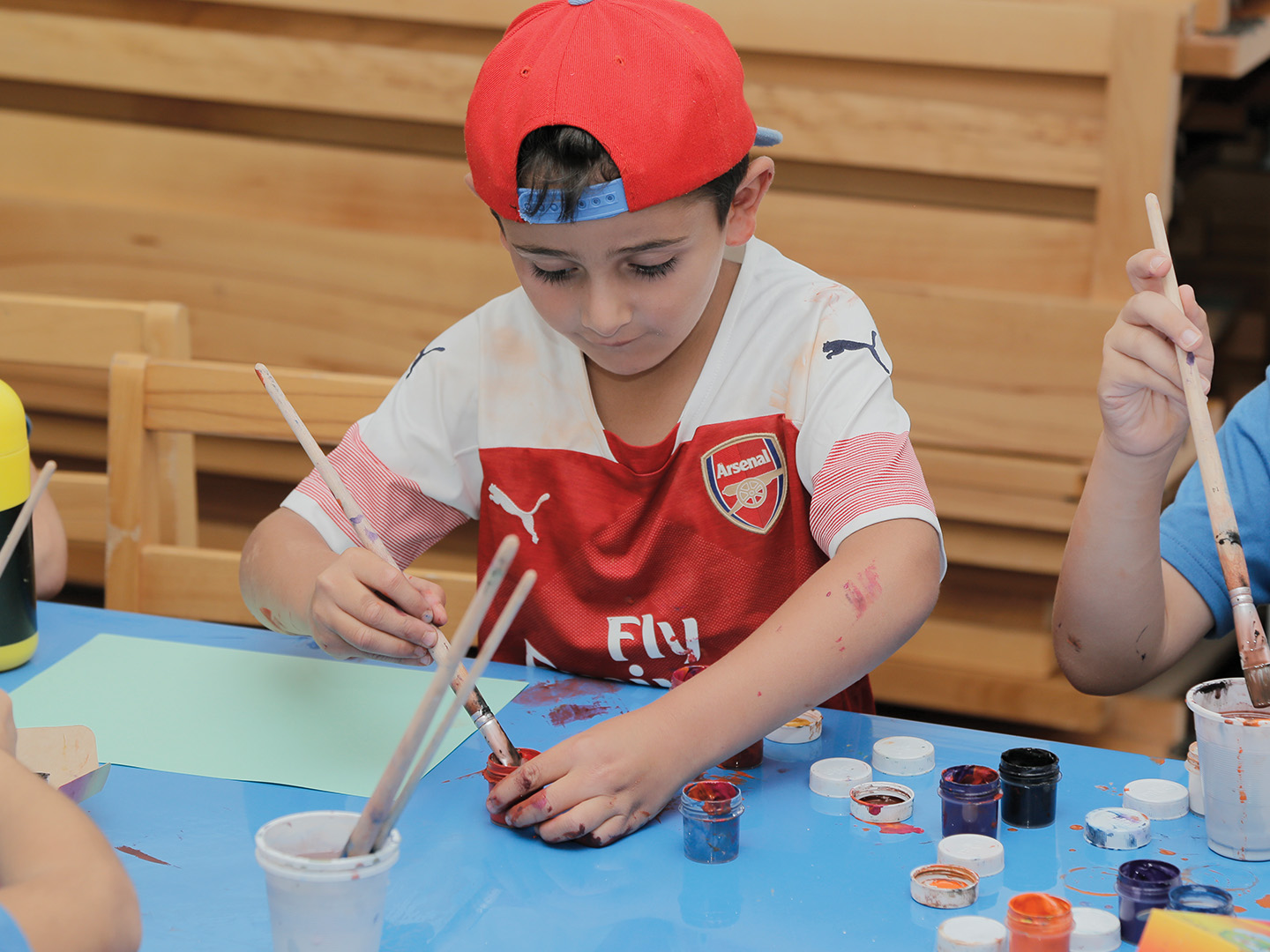 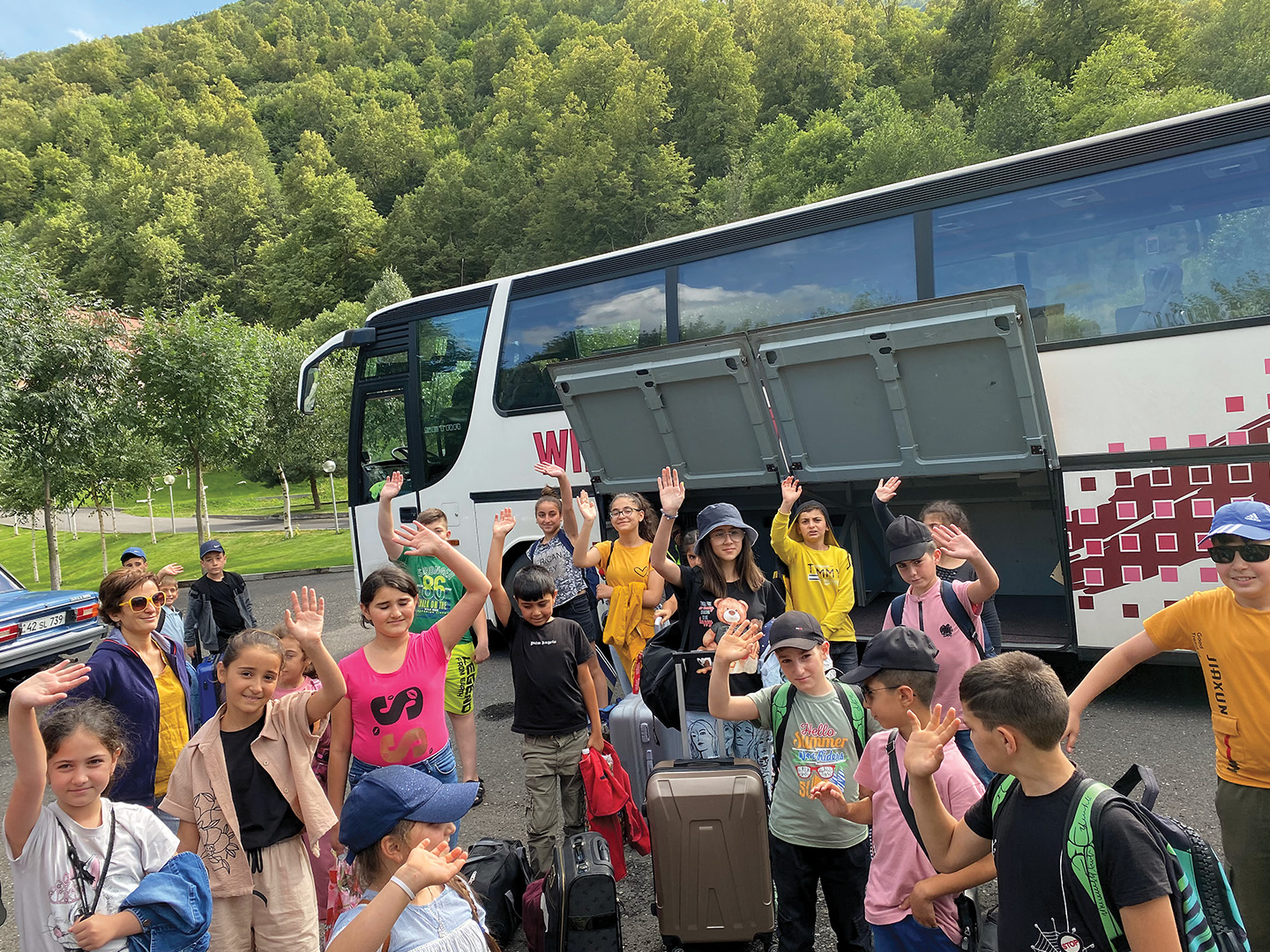 Originally published in the December 2021 ​issue of AGBU Magazine.

A century of adaptation to the shifting winds of history
END_OF_DOCUMENT_TOKEN_TO_BE_REPLACED

The many colors and complexities of Lebanese Armenian life
END_OF_DOCUMENT_TOKEN_TO_BE_REPLACED

How Armenian Jazz improvised its way onto the world stage
END_OF_DOCUMENT_TOKEN_TO_BE_REPLACED

A survey of Armenian culture through Yerevan’s eponymous streets
END_OF_DOCUMENT_TOKEN_TO_BE_REPLACED