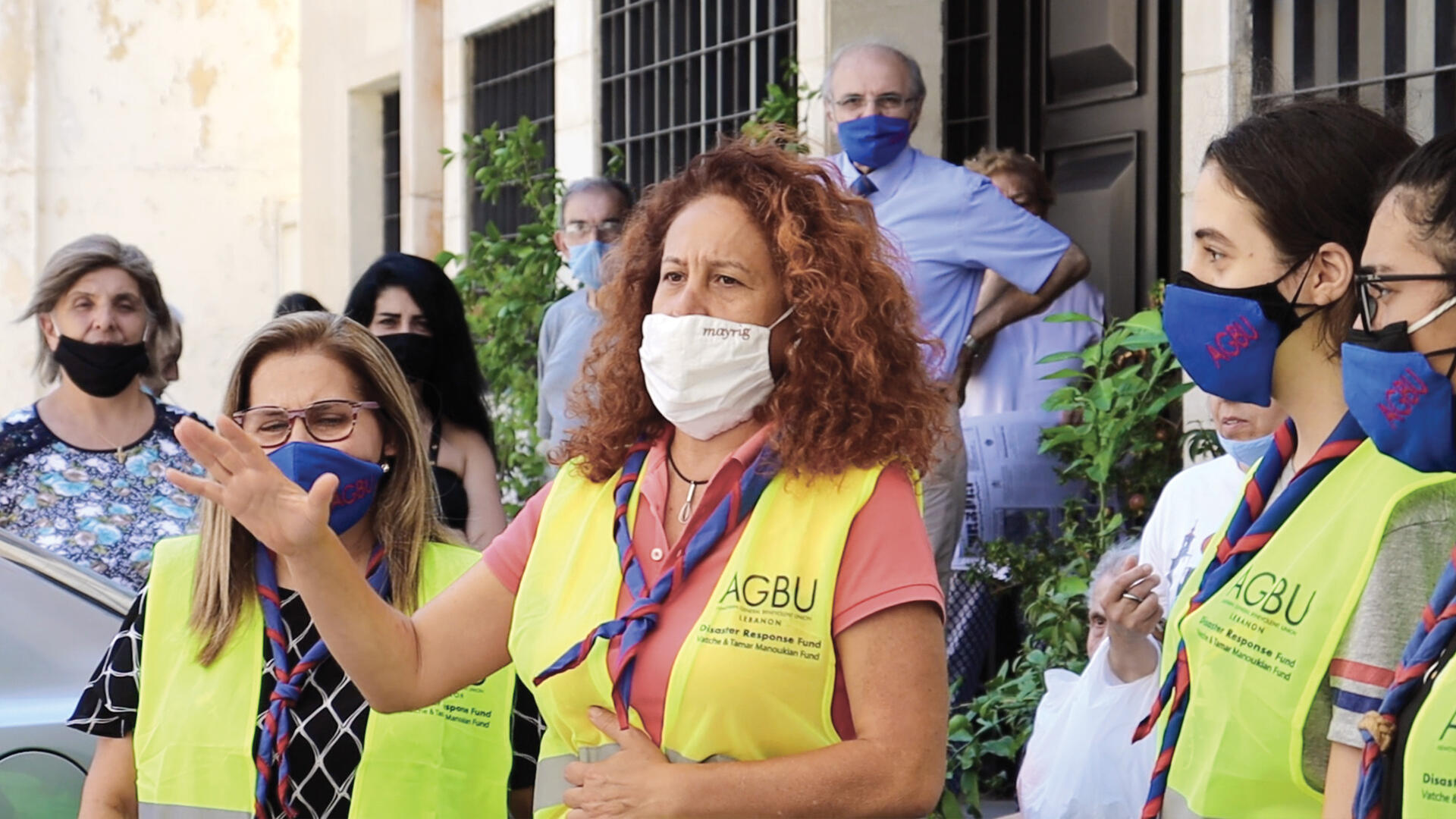 Layout
A- A+
read
AGBU Magazine | The Lebanese Armenians

A conversation with AGBU

Twenty years ago, Aline Kamakian fulfilled a dream of her father’s and opened a restaurant called Mayrig in her native Lebanon. Thus began her one-woman crusade to heighten awareness and appreciation of Armenian culture through its authentic cuisine. Now, four restaurants, a popular cookbook, dozens of local and international cooking shows and media interviews later, Kamakian has added a new endeavor to an already a full plate—feeding her compatriots who are facing chronic food insecurity. Lebanon’s widespread joblessness and financial instability have given Kamakian’s career in the food industry new meaning.

It was at the start of the Covid-19 pandemic when Kamakian joined forces with AGBU to prepare and deliver hot meals to those who had lost their livelihoods or were too fragile or vulnerable to venture out. That turned out to be just for starters. By August of 2020, the explosion at the Port of Beirut had not only rocked the country but also Kamakian’s world, as she and her staff struggled to survive the wreckage that was literally on their front doorstep. Now, a year later, she gratefully reports that she has recovered 30 percent of the hearing she lost in her right ear, as a result of the blast. She is eager to highlight her recent activities and offer her recipe for overcoming a crisis—coping by caring for others.

How were you able to get back on your feet after all your setbacks?

Two days after the explosion, despite my injuries, I was feeding the volunteers that were cleaning up my restaurant. Then others showed up, and I could see they needed a good meal, so I asked the staff to prepare more food. From there, it just took on a life of its own. Before I knew it, I was partnering with the internationally acclaimed Chef Josè Andrès, the founder of the famous World Central Kitchen.

How did you meet Chef Andrès?

Actually, his team was working on the ground and they took notice of me first. They saw that I had lost everything but I was there to feed the people. So Chef Andrès reached out, and very soon, I was partnering with this incredible organization. This allowed me to resume my cooperation with AGBU, as part of our effort to supply the local NGOs with meals for their various constituents.

Did your association with World Central Kitchen open new doors for you?

Yes, it suddenly gave me exposure on American televisions, radios and podcasts. Plus, through my own social media, many TV stations and journalists were able to connect with me directly.

I see Lebanon as a hostage right now. If it were my child and it was taken hostage, I would have to fight until the last drop. So, for me, this is our way to fight. I am not one to hold a gun. I will hold a spoon.

As a humanitarian in your own right, how do you sustain your work?

After Chef Andrès and his team left, I continued the work. So many local donors wanted us to continue.

And we are doing just that. After feeding over 190,000 families in the first months after the blast, we are still feeding 500 families every day.  Like last year, we are preparing to deliver more than 1,000 Christmas dinners to families in need. We are also donating food to schools and working with them to meet the students’ daily nutritional values.

Also, I was lucky to get the cash I needed to persevere. Mostly, it was my friends who insisted on starting a crowd funding appeal. They actually raised $72,000 USD and this was the backup I needed to rebuild fast.

I helped my team repair and rebuild their homes, and refurbished our emergency kitchen so we could expand our reach. In just 29 days, we were able to open the restaurant terrace.

By then, I was able to reflect and realize that I was not the only entrepreneur with these burdens. So many of my fellow enterpreneurs’ businesses were flailing. That is when I began reaching out to everyone I knew, and, being well known in the business community, I used every connection to preach about how to preserve the entrepreneurs.

What are the entrepreneurs up against?

Lebanon is all about small enterprises and that’s what makes the ecosystem work. Especially the places close to the blast. All the small shops, the family businesses, small designers, and hip places.

People listened and felt my passion about the importance of helping our entrepreneurs. My message gathered momentum and I found myself pitching in front of the United Nations, the UNDP and other foundations, saying ‘This is what I’ve done, and this is how I am sustaining.” I wasn’t saying that we should stop helping people restore their homes, only that if we rebuild a home but don’t provide a job for the head of the household or a family member, then we are not rebuilding the ecosystem.

What self-insights have you gained over the last year?

First of all, it gave me the experience of receiving donations; because I had always counted on myself. Now I felt the humility but also the deep gratitude of receiving. Plus, working with my team to rebuild and service others was like group therapy. It brought us closer.  We became like family.

And as a family, this is our way of activism, of revolution. Of giving others hope. I live in Lebanon. It’s a chaotic place, but every country has its positives and negatives. I see Lebanon as a hostage right now. If it were my child and it was taken hostage, I would have to fight until the last drop. So, for me, this is our way to fight. I am not one to hold a gun. I will hold a spoon.

A century of adaptation to the shifting winds of history
END_OF_DOCUMENT_TOKEN_TO_BE_REPLACED

The many colors and complexities of Lebanese Armenian life
END_OF_DOCUMENT_TOKEN_TO_BE_REPLACED

How Armenian Jazz improvised its way onto the world stage
END_OF_DOCUMENT_TOKEN_TO_BE_REPLACED

A survey of Armenian culture through Yerevan’s eponymous streets
END_OF_DOCUMENT_TOKEN_TO_BE_REPLACED