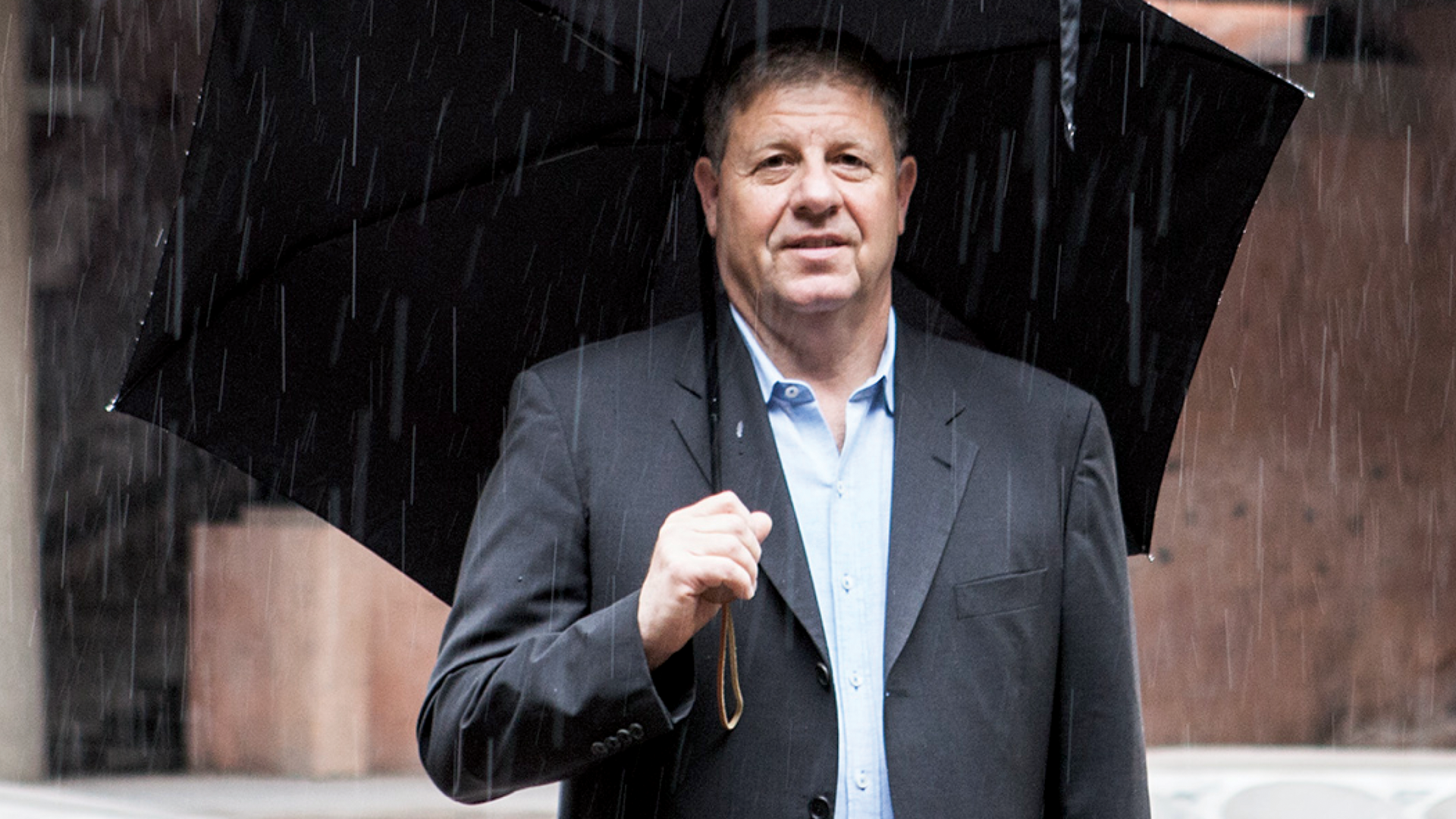 
It is an all too familiar dilemma for many young men and women raised in a traditional Armenian household—one that even decades later elicits a knowing smile on Adam Kablanian’s face when the topic is raised in conversation. Growing up in Aleppo in the 1970s, he struggled with his parents’ expectations that he would pursue a career in medicine, becoming the first doctor in his extended family. Instead it was a passion for the world of physics—questions of order, space and time—that stirred Kablanian’s soul. “No, my parents did not encourage me,” he laughs. “They thought I was crazy to give up a future as a doctor to study physics with no perceived practical benefits.” Defying his parents would not be easy, but he insisted on chasing his own dream and at eighteen moved to California to enroll at the University of California, Berkeley.

Although he later veered from his plan to become a physics professor, instead choosing to pursue a career as an engineer, that fateful decision to move to the United States proved to be far more valuable than his parents could ever have imagined. Today, Kablanian is a remarkably successful tech entrepreneur who is considered a pioneer in the field of microchip design and embedded memory, with 15 patents to his name. Straightforward and pragmatic, he also possesses a sharp business acumen and an uncanny ability to anticipate the market demand for that ‘next big thing.’ On the cusp of the internet explosion in 1996, Kablanian co-founded Virage Logic to provide embedded memory solutions and high-end products to tech companies in need. Within four years he was the CEO of a publicly traded company on the NASDAQ stock exchange. Virage Logic would continue to expand with more than 700 employees, eventually becoming the number one embedded memory provider worldwide. “The most rewarding aspect was figuring out that I could operate independently and start my own company,” he says. “I took a lot of risks and made many difficult decisions but luckily most of them were right!”

One of those ‘right’ decisions took place over a glass of Armenian brandy in Yerevan during a meeting with Armenian engineers. Impressed with their knowledge and talent, Kablanian decided on the spot to open a branch office of his company in Armenia. At a time of economic recession when there was not even electricity in the city, he knew that for every person he hired, he would be helping support multiple families. What he didn’t expect was how quickly his decision would yield results as his team of Armenian engineers began designing high-end products that would be sold to companies such as Toshiba and Apple. This included three Armenian-designed microchips used in the first-generation Apple iPod. Over the next few years, the Armenian office became the center for Virage Logic’s flagship product, employing more than 150 people. Its success helped Kablanian convince other tech companies such as Synopsys, whose Armenia operation is currently led by AGBU Board member Yervant Zorian, to move operations to Armenia. “I felt I played an important part in establishing what I hope will become, in ten or twenty years, a mini Silicon Valley in Armenia that will create more opportunities, not just for Armenians, but for others in the region—Iranians, Syrians and Russians—and benefit both the Armenian and global economy.”

Having successfully grown his own company in such a short time frame, Kablanian needed to slow down. “I was exhausted,” he recalls. “I came to the point where I could not produce anymore so I turned over the operation to my partner.” It was an opportunity to spend more time with his wife Rita and their two children, Andrea and Alex, and indulge in his favorite pastimes, including traveling, hiking and reading.

At the same time, Kablanian became increasingly involved in the Armenian community, volunteering both his time and financial support to several impressive initiatives and organizations. In 2015, he also served as chairman of the San Francisco Bay Area Genocide Centennial Committee, helping raise hundreds of thousands of dollars and organizing several events that brought the local Armenian community together.

The goal of improving both the quality and access to education is particularly close to his heart. Kablanian headed a successful fundraising campaign to raise three million dollars for the Armenian Studies program at his alma mater, University of California, Berkeley. In an effort to help the next generation of Armenians, he also joined the Board of Trustees of the American University in Armenia (AUA) and later became the chairman of the AUA Development Committee. Together with his wife Rita, the couple established a scholarship that supports 25 Syrian Armenian students for four years.

For Kablanian, giving back to students is also a way of paying forward the support he once received as a young student in Aleppo. At the time, his parents could not afford to send him to high school, so AGBU stepped in to provide him with a scholarship to attend the AGBU Lazar Najarian-Calouste Gulbenkian School. “I owe much of my success today to AGBU,” he says. “I had a big village helping me get to where I am today so it is very important for me to give back to others so they can become established in their own careers.” The school and the AGBU club next door, he says, provided much more than an education. “It had a huge impact on my values. It was where I learned how to conduct a meeting, take minutes, and support my colleagues—all of the things I do now in the corporate world was all influenced by AGBU.”

I owe much of my success today to AGBU. I had a big village helping me get to where I am so it is very important for me to give back to others so they can become established in their own careers.

Since leaving Virage Logic, rather than easing into retirement, Kablanian’s thirst for knowledge and zeal for work appears to have only intensified. Over the past decade, he founded iCON Communications in Armenia, providing the first wireless and affordable broadband internet connection to Armenians. He later served as the CEO of Memoir Systems and as the CEO and Chairman of the Board of PlasmaSi, in each case transforming an exciting technology into a thriving commercial enterprise. “I need to solve problems,” he admits. “Otherwise I am not who I am. So I started focusing on solving more meaningful problems.”

Once again, Kablanian has found himself at the forefront of technology, anticipating a future demand with his latest venture focused on neural interface implants. As chairman of Paradromics, he is working with a team of neuroscientists, physicists, software, electrical, and mechanical engineers to develop a viable technology to provide neural control on par with real life movement of state-of-the-art prosthetic limbs to amputees. The advanced technology is hoped to also be able to reverse the damage sustained by people with spinal cord injuries and neurological diseases that restrict movement, hearing or speech.

“Prior to that point, I had zero knowledge of the brain,” says Kablanian. “But I understood the microchip and physics side of the equation. And the opportunity to help create a company to solve this problem and help millions of people with disabilities enjoy a better quality of life got me very excited.” Even though Paradromics is in the initial stages of development, Kablanian already has his eye on his next project. “If successful, down the road multiple spin-off companies can be created.”

Aiming high is a lesson he learned over the course of his career, and is one that he encourages aspiring engineers and entrepreneurs to follow today. “Focus on solving a meaningful problem, one in which you can have a major impact, rather than limiting yourself to resolving small incremental issues or seek to make an existing solution more efficient. If you are successful, you will be transformative.”

Contemplating his own transformation today, Adam Kablanian’s only regret is that his father passed away before he could see his son’s success. For her part, his mother, who now lives in Yerevan after he helped her move to avoid the Syrian war in 2011, has changed her tune about her son’s decision not to become a doctor all those years ago. With another laugh Kablanian acknowledges, “Yes of course she is very happy I am not a doctor!”

For Haig Apovian, AGBU Brazil is a global platform
END_OF_DOCUMENT_TOKEN_TO_BE_REPLACED