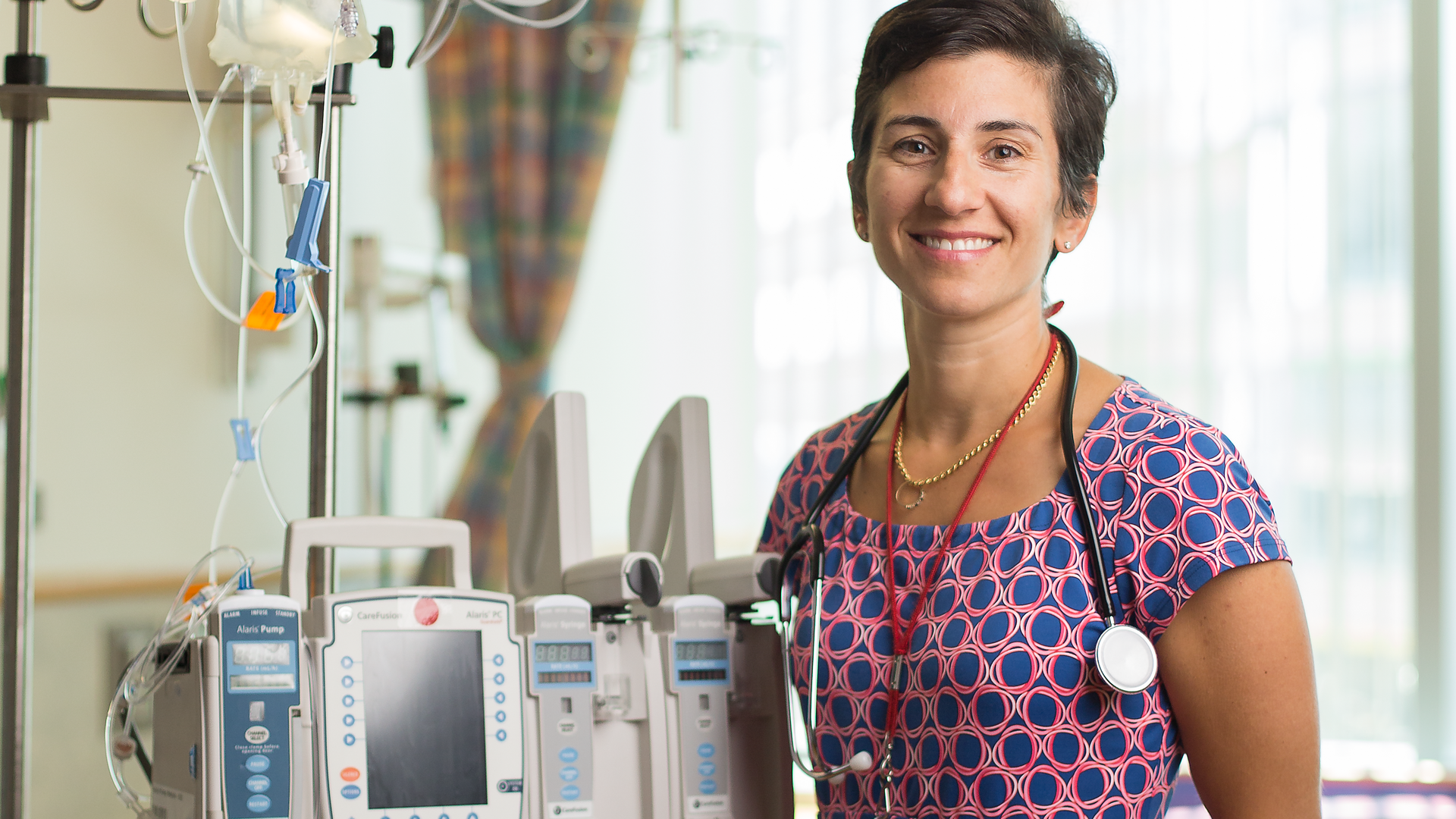 
U2 is playing in her ears as she runs to clear her mind at dawn. At dusk, she races sailboats to indulge her passion. As an Associate Professor of Anesthesia, Critical Care and Pediatrics at the University of Pennsylvania Perelman School of Medicine, she teaches to pass on her knowledge. Her manner both purposeful and humble, Dr. Alexis Topjian heals dozens of children every day.

A native of New Jersey, the highly trained pediatrician specializes in the field of neural and post-cardiac arrest intensive care. As part of her research, she is exploring ways to decrease the likelihood of neurological damage among children recovering from cardiac arrest. Her latest findings suggest that modifying blood pressure and fever rates among children who have suffered a cardiac arrest or have been treated in the ICU may improve longer-term survival.

Her typical day is a flurry of meetings and appointments, and after a friendly yet quick introduction—the brevity a necessity in her work—she settles down to share her story.

Born to Armenian parents, Topjian was raised in a large Armenian household in a small city with a vibrant locale. She grew up attending St. Thomas Armenian Church in Tenafly, New Jersey. Surrounded by dozens of cousins, loving aunts and uncles, Topjian enjoyed a childhood full of Armenian flavor. In school and later in college her background often elicited curiosity. The usual reaction to her proud reply of “I am Armenian” was often “what’s that?” “I just wished I was Italian, because everybody knows what Italian is, right?” she recalls with a disarming laugh.

Over time, she learned that being Armenian held special meaning. “We are survivors,” Topjian recounts. “We are a small group of people who rise to the challenge.” Her life story epitomizes these words. Her pursuit of excellence led to a biology degree from Harvard University, her father’s alma mater. She then earned a spot at Columbia University’s College of Physicians and Surgeons, one of the finest medical schools in the United States. This, in turn, led to an internship and residency at The Children’s Hospital of Philadelphia, where she later became a fellow. Soon after graduation she was offered a position as Assistant Professor of Anesthesiology and Critical Care and has been an attending physician at the same hospital for the past nine years. She has recently been promoted to Associate Professor in recognition of her academic achievements.

Like most successful physicians, Dr. Topjian juggles multiple jobs at once. A quarter of her time is devoted to clinical care, where she looks after 18 of the unit’s approximately 50 critically ill children. “I really like managing the whole body and physiology,” says Topjian, who knew early on she was going to be a pediatrician and an in-patient physician in an intensive care unit. She also appreciates the fast pace and immediate feedback, often from the patients themselves.” In the ICU you can control how the body functions,” she says. “You can take the sickest of the sick and make them better, see them recover to being healthy, which is incredibly rewarding.” While the majority of Dr. Topjian’s little patients recover—in most cases incredibly well—it is always heartbreaking when a sick child succumbs to illness. According to the estimates published in the report by the UN Inter-Agency Group for Child Mortality, the US child mortality rate has remained steady at seven per 1,000 since 1996. “Although that rate is smaller in numbers,” notes Dr. Topjian, “it feels larger because of its impact.”

Once a month for seven days in a row, Dr. Topjian performs her rounds beginning at 5:30 am each day, during which she is in charge of four pediatric residents and one intensive pediatric care fellow. One to two nights a month she then works as the nighttime physician overseeing the care of more than 50 patients, in addition to any other code blue emergencies outside the hospital. During the remaining three weeks of the month she is focused on her research agenda.

Dr. Topjian’s interest in research was first sparked in 1991 in her sophomore year when she participated in the AGBU New York Summer Intership Program at Columbia. “I remember walking into the lab at Columbia, where I ended up going to medical school and being blown away,” she explains with contagious excitement reflecting on her time at the medical school. “I thought this is what I want to do, this is where I want to be,” she recalls. “I actually don’t know how I would have ever had that exposure otherwise,” admits Topjian, who now devotes a substantial portion of her time researching seizures in children, post-cardiac arrest care, and other related areas. She has authored more than 35 manuscripts, including publishing in the prestigious New England Journal of Medicine, and lectures frequently on resuscitation science and pediatric neurocritical care nationally and internationally.

What does this early rising, energetic doctor working in a high-stress environment do for pleasure? Laughing, she admits most of her precious free time is taken up by her fulfilling family life with three daughters aged 10, 8 and 5. The avid runner and sailor confesses to a love of sports that dates back to her early childhood when she dreamed of becoming the first female baseball player for the New York Mets. Her other aspiration was to be an astronaut. She loved science, math and calculus. “My parents actually sent me to a space camp in Alabama when I was 12 or 13,” she recalls fondly.

While she admits to being quite shy in her youth, she acknowledges she was driven by an inner-strength waiting to blossom. “I think some of it is derived from my family, people who believe in me, challenge me and support me. That is invaluable.” That nascent self-confidence developed further as she grew up with a strong sense of belonging, and seeing the positive results of her efforts lead to change.

Her parents, Karen and Hrand Joseph Topjian, continue to play an iconic role, each in their own way. They pushed her to find and chase dreams. Her mother, who stayed home until Alexis and her two siblings were in their teens, is an award-winning interior designer. “She has an incredible ability to juggle 20 thousand things at once,” she explains. “My mother clearly influenced me in terms of making this all possible.” Dr. Topjian also shares a special bond with her father, a business consultant, and her biggest cheerleader. “You feel the pride and it’s amazing!”

I think when you are knocked down and you have people to pick you up you have to be persistent. And perseverance is very much part of being an armenian.

As a junior in college, Dr. Topjian remembers being told by her advisor that she would probably not get into the medical school of her choice because her grades were not strong enough. Devastated, it was her parents who helped her recover, along with her inherent Armenian sense of perseverance. “I think when you are knocked down and you have people to pick you up you have to be persistent,” she says. “And perseverance is very much part of being an Armenian.” She took a year off to recalibrate, teaching in Barcelona. While there she applied to the College of Physicians and Surgeons at Columbia University, and her efforts were rewarded with an acceptance letter. She has never doubted herself since. And now, while she saves lives, teaches, and helps her daughters fully embrace their Armenian heritage, she is planning new ways to give back by translating her life-long dedication to clinical care into advancing intensive care in Armenia.

Dr. Berdj Kiladjian inspires change through a spirit of service and leadership
END_OF_DOCUMENT_TOKEN_TO_BE_REPLACED

The Insider talks with the incoming Alex Manoogian Chair in Modern Armenian History at the University of Michigan, Hakem Al-Rustom
END_OF_DOCUMENT_TOKEN_TO_BE_REPLACED

Stepan Khzrtian cultivates a culture of negotiation in Armenia
END_OF_DOCUMENT_TOKEN_TO_BE_REPLACED