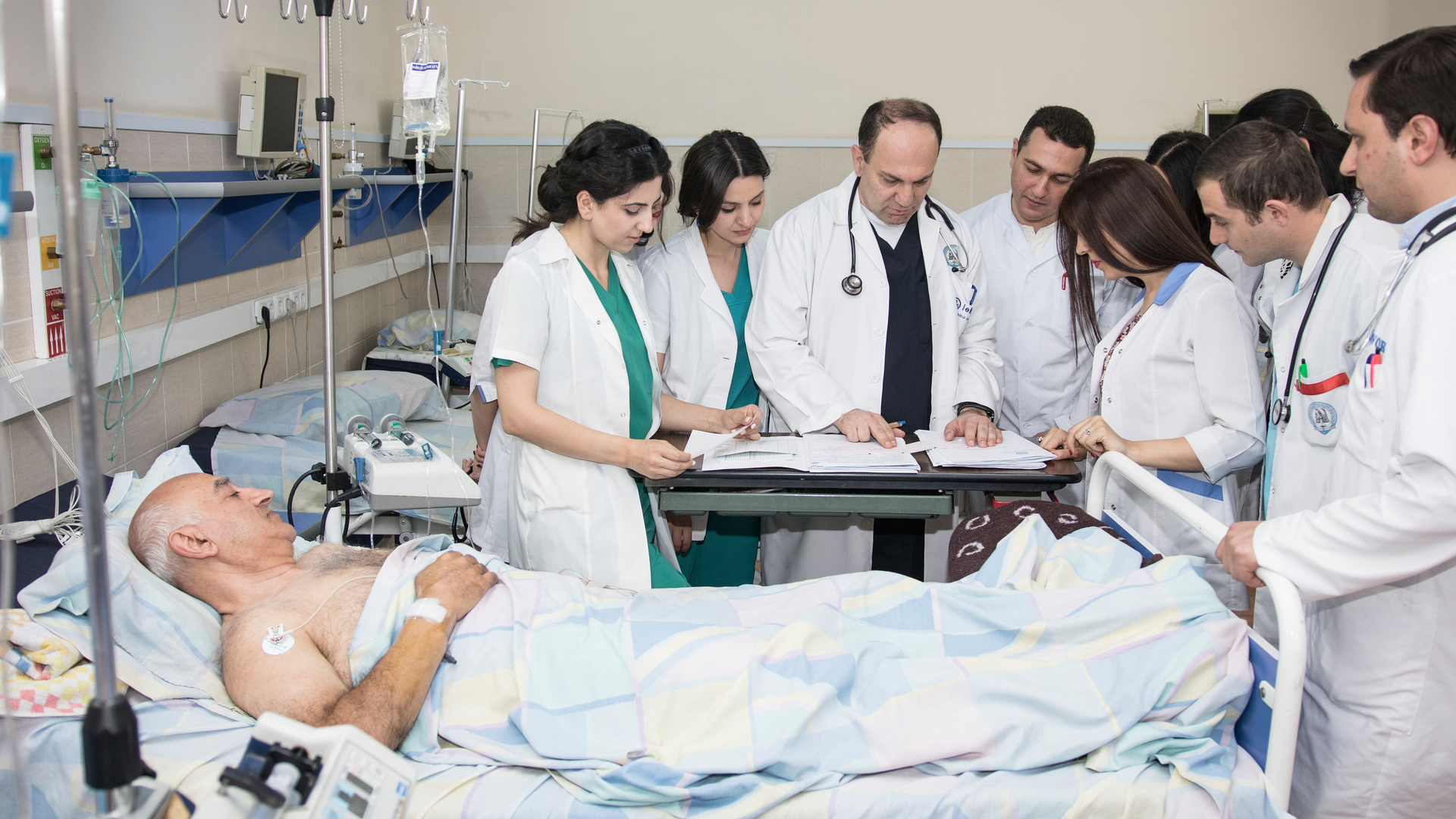 Making excellence the standard of care in Armenia with Dr. Hamayak Sisakyan


At the core of the ancient practice of medicine lies a spirit of compassion. The noble pursuit to heal the sick captured the imagination of Hamayak Sisakyan as a young student in Yerevan in the 1980s. He also inherited from his parents—professors of biology and chemistry—a desire for intellectual stimulation, curiosity, and a sense of accomplishment, which inspired his lifelong passion for clinical research. “I love my medical practice and teaching, but if I could do more of anything, it would be research,” he says without hesitation.

If there is one quality Dr. Sisakyan is perhaps most admired for, it is his outstanding medical leadership. As the head of the Department of General and Invasive Cardiology at Yerevan State Medical University Hospital, he is responsible for decision-making, medical consulting, recruiting and managing resources, implementing change and improving department and clinical settings. Effective time management is a constant challenge for Dr. Sisakyan, who prides himself on always performing at maximum capacity. He strives to deliver the best care possible as part of his multiple clinical, academic and administrative responsibilities, which require most of his attention, leaving little time to indulge in his passion for research. “During the last few years I had actually hoped to have more free time but gradually I became even more busy,” he notes wryly. “I hope during the next decade I will be more free.”

Sisakyan’s day begins with a 9 am meeting with his fellow doctors and residents to review the cardiology unit’s cases. Before long, it’s time to examine the most critical patients during his rounds in the cardiac intensive care unit (ICU). He then turns his attention to his academic duties, lecturing at the University and imparting his knowledge to students and residents during his clinical practice. “I really enjoy working with residents, discussing problems and how best to resolve them, because I love to share my expertise and they in turn inspire me with their own professional success,” he acknowledges. In recognition of that contribution, Yerevan State Medical University has twice presented Dr. Sisakyan with its Gold Medal award.

Part of that mission to disseminate his medical knowledge includes his numerous affiliations with professional organizations, including the American Heart Association and the European Society of Cardiology as well as his work as Deputy Chief Editor of the New Armenian Medical Journal and as an editorial member of the Russian Cardiologic Journal. “It is my duty to constantly learn and evolve as a physician and then to share that knowledge that can’t be found in a textbook or medical journal yet with my students and residents.” he says.

It is my duty to constantly learn and evolve as a physician and then to share that knowledge that can’t be found in a textbook or medical journal yet with my students and residents.

Sisakyan also admits he has trouble turning down the many invitations he receives to attend international conferences as he considers them not just an honor, but in some respects an obligation as an Armenian to represent his country at an international level. In fact, in 2013 he was the first physician from Armenia to become a Fellow of the American Heart Association, a prestigious award.

When Sisakyan was a young medical resident in early post-Soviet Armenia, such opportunities for professional advancement and career development were virtually non-existent. By comparison, in the United States, the field of cardiology was undergoing a revolution in treatment with the invention of stenting and the growth of pharmacotherapy to treat coronary heart disease. Sisakyan is grateful to AGBU for the scholarship that enabled him to accept a fellowship in ultrasound technology at Thomas Jefferson University Hospital in Philadelphia in 1995. “It was a critical turning point in my career,” he says, “as it broadened my understanding of medical education and opened exciting new opportunities for collaboration and career advancement.”

Having refined his clinical judgment and diagnostic methods, Dr. Sisakyan contemplated remaining in the United States to pursue his career, but ultimately decided to return to Armenia to be closer to his family and his Armenian roots. “It’s a decision I don’t regret at all,” he says, “because I stayed with my culture. My children grew up in Armenia with their grandparents. Being Armenian means you are part of this great, very rich cultural heritage and I wanted to remain immersed in that environment.” As an Armenian, Dr. Sisakyan firmly believes he also has an obligation to give back to his people and was motivated to transport what he learned in the United States in order to successfully recreate a highly professional and productive atmosphere in the department of General and Invasive Cardiology and affiliate Radiology and Ultrasound Center at Yerevan State Medical University.

The life-changing fellowship also led to a lasting friendship and partnership with AGBU Board Member Dr. Levon Nazarian, a Professor of Radiology at Thomas Jefferson University Hospital and current editor-in-chief of the Journal of Ultrasound in Medicine. In 2000, the dynamic pair jointly founded, and now co-direct, the Ultrasound Training Center at Yerevan  State Medical University, affiliated with the Jefferson Ultrasound Research and Education Institute in Philadelphia. More than 500 physicians and students have since completed their training at the center.

Dr. Nazarian later arranged for the donation of a state-of-the-art MRI unit that now serves as one of the leading imaging centers in the country. The advanced equipment and training materials provided by AGBU have enabled doctors to perform exams that were not possible beforehand, resulting in a decrease in the patient mortality rate at Yerevan State University Medical Hospital. “The center is an example of how to move forward in Armenia because as a practicing physician, we are always struggling with limited resources and out-of-date equipment which impedes the professional development of our physicians. Being able to offer up-to-date training and the latest equipment is a critical link in the chain of success.”

Now looking back on his own trajectory, Dr. Sisakyan emphasizes a constant pursuit of more medical knowledge, a devotion to research and clinical practice as the formula for a successful career in medicine. He also notes that procrastination and fear are the biggest impediments to advancement, highlighting the importance of effective time management and the courage to take on any challenges in spite of any perceived risks.

Throughout his entire career as a physician, professor, and healthcare administrator, Dr. Sisakyan has continuously fostered a strong spirit of collaboration not only among his staff at the hospital, but also outside the walls of Yerevan State Medical University, where he has helped forge productive partnerships with dozens of academic and medical institutions worldwide. He is particularly proud of his latest project with Thomas Jefferson University Hospital, a plan to establish a full-fledged student exchange program that would see many more Armenian medical students benefit from advanced training in the United States. The collaboration is one of many that will further contribute to improving the quality of education in Armenia, a responsibility this model of medical leadership cherishes most of all.

Dr. Berdj Kiladjian inspires change through a spirit of service and leadership
END_OF_DOCUMENT_TOKEN_TO_BE_REPLACED

The Insider talks with the incoming Alex Manoogian Chair in Modern Armenian History at the University of Michigan, Hakem Al-Rustom
END_OF_DOCUMENT_TOKEN_TO_BE_REPLACED

Stepan Khzrtian cultivates a culture of negotiation in Armenia
END_OF_DOCUMENT_TOKEN_TO_BE_REPLACED