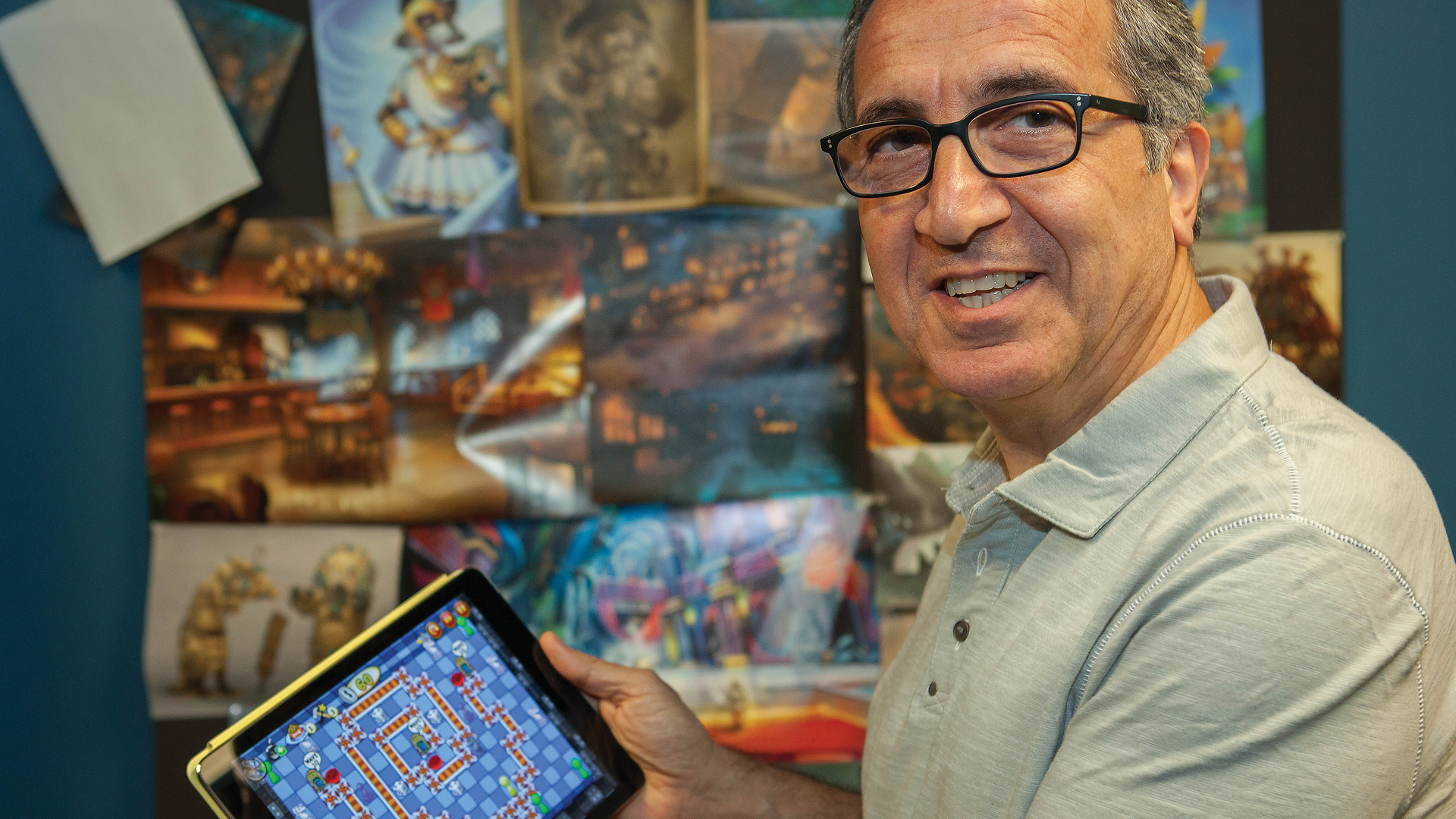 Layout
A- A+
read
AGBU Insider | Dressed for Success

How Texas-based tech entrepreneur Elie Akilian got his game on


In the fictional world of Wizard City, the first level of the online game Wizard 101, players can explore such mystical places as Cyclops Lane, Golem Tower, Unicorn Way, Firecat Alley, and the Haunted Cave. If successful, your character—a novice wizard-in-training—will arrive at the Ravenwood School of Magical Arts, a Hogwarts-type academy overseen by Merle Ambrose, the master sorcerer, quest-giver, and creator of Wizard City.

In the real world of KingsIsle Entertainment, the industry-leading developer of Wizard 101 and several other hit video games, the chief wizard is Elie Akilian. Based out of Texas, KingsIsle employs roughly 250 people at offices in Austin and Plano (a suburb of Dallas) and is currently developing half a dozen games for tablets and mobile devices. Wizard 101 was the companyís first major game, released in 2009 and developed over four years following KingsIsleís founding in 2005.

It was an unexpected venture for Akilian. As a boy growing up in Lebanon, he never played games; as a father of two in Texas, he always discouraged his children from playing. “Then I realized, hereís a generation who grew up with these games; they consume it in a more casual way,” he says. “That struck a chord with me, and I saw that playing games was not as taboo as it was in the old days.”

After surveying the field, Akilian conceptualized a way to improve on the conventional way gamers were playing at that time. His breakthrough idea: to allow users to begin playing within two minutes as the rest of the game downloaded in the background. Other games on the market at the time took up to six hours to fully load. Akilian also made Wizard 101 fully available online, obviating the need for CDs or cartridges.

People who played World of Warcraft would buy the CDs and wait six hours for it to download. You could get our game online and start playing in two minutes.

In addition to bypassing pricey, restrictive gaming consoles, Akilian aimed to create products that would interest both serious and casual gamers. “We wanted to make a really deep game that you could play for five minutes and feel like youíve done something,” he explains. “I constantly push to make our games more casual. The more casual you make it, the bigger your market is.”

Before founding KingsIsle, Akilian cut his teeth as a tech entrepreneur with Inet Technologies, a telecommunications firm he co-founded in 1989 with AGBU vice president Sam Simonian.

“Sam and I were working at the same company. The telecomm industry was getting deregulated; everything analog was getting digitized. When AT&T came to us and wanted to test some items that were being digitized, I thought, if they are doing this now, it is going to happen globally. So I told [Sam] we should leave and do this on our own.”

At the time, Akilian was married with one daughter, and had spent the previous nine years working as an electrical engineer for a defense contractor in Texas. Leaving his job and launching a business wasnít easy, Akilian says, and the partnersí initial investment didnít last long—but in the end, Inet proved to be worth the risk.

“We each put in $6,000 and thought it would last six months. Are you kidding? It lasted six weeks!” Akilian laughs. “When we sold the company, we had 750 employees and were doing a couple hundred million in annual revenue. To see something go from zero to $500 million in value was beyond anyoneís imagination.”

Looking back, Akilian credits AGBU with giving him the work ethic to excel in his pursuits and the financial support he needed to get his start.

“I was an okay student in school. I did the minimum required to keep my parents off my back. But one day my older brother and I were talking to my dad, and he said he could not pay for my college. It was like a brick hitting me on the head,” he recalled. I knew the only way was a scholarship, so for me, AGBU was that light in the darkness. It made me do more than I was doing at that time. From that point on, I applied myself and was first in my class.”

When Akilian graduated high school in 1975, the Lebanese Civil War had already been simmering for some years. Having grown up hearing glamorous stories from relatives in California, Akilian wanted to study in the United States, but his father did not approve of him leaving Lebanon. Instead, he was awarded an AGBU scholarship to study at the American University in Beirut.

“In the US, if youíre a good enough student, you can apply for many scholarships or get loans. There are so many ways to access education. In countries like Lebanon, at least for me at that time, there is no such opportunity. If you donít have money, youíre done. Thatís why AGBU looms so large in these places, because they provide hope for kids who donít think thereís another way.”

Within a few months of being accepted to study in Beirut, Akilian was given the opportunity to relocate to the USA, which he seized. Akilian went to New Jersey and spent one semester studying at Fairleigh Dickinson University before transferring to the University of Texas at Arlington, where he worked odd jobs as a bartender and waiter to supplement his AGBU scholarship.

“When I graduated, I was making more money waiting tables than I did at my first electrical engineering job,” he chuckles.

Now a successful CEO, Akilian cherishes the community that has helped him achieve so many goals in the land of his childhood dreams.

“Because Armenians are a small community, it makes you feel you must do something to help,” he says, highlighting the need to preserve the Armenian cultural heritage. “I tell my wife, who is from Poland where there are 50 million people: if one million assimilate, you still have 49 million people.”

Vahram Muratyan has produced a bestselling book, a hit blog and high-end prints for designers such as Dior, Hermes and Prada—and you should see what’s next
END_OF_DOCUMENT_TOKEN_TO_BE_REPLACED

Architect Houry Avedissian turns visions into reality for her clients, including her AGBU alma mater
END_OF_DOCUMENT_TOKEN_TO_BE_REPLACED

Tigran Nazaryan has a passion for software, business, and investing in Armenia
END_OF_DOCUMENT_TOKEN_TO_BE_REPLACED

Seta Kantardjian encourages generations to connect with their heritage
END_OF_DOCUMENT_TOKEN_TO_BE_REPLACED