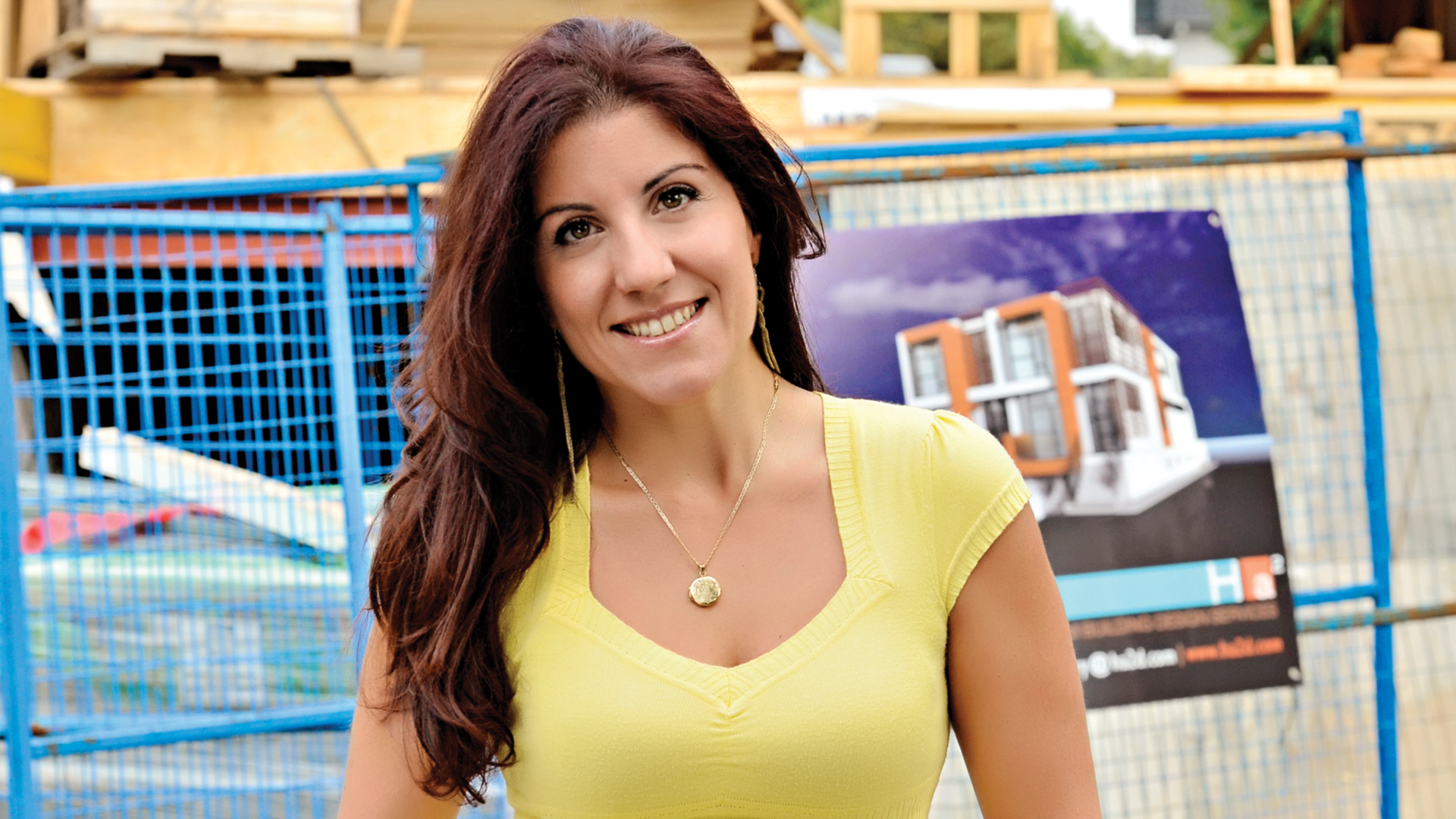 Layout
A- A+
read
AGBU Insider | Dressed for Success

Architect Houry Avedissian turns visions into reality for her clients, including her AGBU alma mater


Because of Houry Avedissian, the AGBU Alex Manoogian School in Montreal has a new library to inspire lifelong learning, advance knowledge, and strengthen the community. Bedecked in bright tones of red, maple, and white, the scholarly space welcomes students with lustrous chairs, retractable tables, and a hive-like wall of asymmetrical shelves filled with books. Twinkling track lights shine down through glass doors and display cases, illuminating the multipurpose space for study, classes, or conferences. Unlike traditional, archive-style libraries that are designed like information stockrooms, the new Manuel Keusseyan Library—named for a beloved Manoogian School educator and intellectual—is an  interactive venue, outfitted with projection screens, iPads, and digital books in Armenian, English, and French.

Such state-of-the art design epitomizes the work of Avedissian, whose Ha2 Architecture Design firm specializes in creating unique homes for private clients. One project, called The Treehouse, scales skyward with a predominantly wooden faÁade rising above spruce and crab apple trees. Another property, The Brierwood, is a stone-cedar hybrid with elongated windows crowned by an alpine roof. While the versatile Keusseyan Library suggests her penchant for marrying function and form, Avedissian's homes strive to synchronize on multiple levels—surroundings with building exterior; exterior with interior—demonstrating harmony as a core principle of her work.

Before starting Ha2 Architecture, Avedissian designed commercial real estate with various firms. Although she now focuses on custom homes, the library is nothing short of a passion project for Avedissian, as well as a homecoming. Born in Australia to Armenian parents, Avedissian moved to Montreal at the age of seven and enrolled in the Alex Manoogian School, where she was class valedictorian in sixth grade.

“When I was at the school working on the project, I had access to old videos, and I asked the principal if I could borrow them,” Avedissian recounts. “I had never seen my speech before, so there I was watching my video 28 years after the event took place!”

Another video, of an Armenian dance performance, proved a testament to the strong bonds Avedissian forged with Manoogian School classmates.

“I’m still very close with my friends from school, and most of my classmates are on my Facebook account,” says Avedissian. “When I posted the dance video on Facebook, it caught fire. The comment thread went on and on; everyone was reminiscing about the good old days.”

The idea for the library project originated after Avedissian gave a speech for the school’s cafeteria renovation in fall 2012. Having heard of her work in the Canadian capital through such media outlets as Ottawa Citizen magazine, the principal contacted her about renovating the library, which dated back to Avedissian’s childhood.

“Back when I was in the school 20 years ago, the library just had standard beige shelving units and standard wooden folding tables. We would sit around, but there was not enough space to have a class, debate, or presentation,” Avedissian recalls. “It had no interactive feel. Now, they are planning to communicate via Skype with students in Armenia.”

From the beginning, Avedissian says, the goal was to construct not simply a library, but a dynamic space that could be manipulated for multiple functions. Such adaptability required extensive forethought and micro-planning, all the way down to the flexibility of the furniture.

“I had to find a table that we could stretch out and then conveniently tuck away, but still have it be sleek and modern,” she describes. “There’s furniture still to come, coffee tables, that can easily be put away in the storage cabinet,” thus making the room easy to transform from a trendy reading lounge to a screening room or conference hall.

For Avedissian, perhaps the most rewarding part of the project was hearing students’ excited response while visiting the school after the library’s completion. Historically, the school has a reputation for cultivating high-achieving professionals in fields such as law, science, and business; to be part of keeping that tradition alive, Avedissian says, is extremely gratifying.

Indeed, Avedissian herself is part of that legacy of success, and she traces her interest in architecture back to her days at Manoogian.

“I was an only child, and I had to keep busy somehow,” Avedissian remembers. “I enjoyed making things. I used to collect popsicle sticks and put houses together. When I couldn’t get a dollhouse that I wanted, I said, Fine, I’m going to make my own!’”

Her dream of becoming an architect nearly ended during her first year at the UniversitÈ de MontrÈal, where she suffered a medical setback, collapsed during class, and subsequently lost mobility in half her body. With extensive recovery and some encouragement from a former professor, Avedissian eventually regained her drawing skills and resumed a career in architecture.

Looking ahead, Avedissian is open to doing projects in Armenia, and says she would jump at the chance to do so if the opportunity arises. When she visited the country for the first time in 2005, she found herself inspired by the homeland of her ancestors.

“From the moment you wake up and see Ararat, all the statues, all the monuments… you see all the things that seemed far away, and all of a sudden they’re standing right before you,” she says. “You walk down the street and hear Armenian, and you feel like it’s like a brotherhood—like they’re family automatically.”

In her daily life, Avedissian keeps her heritage alive by speaking Armenian with her family and friends, former classmates at the Manoogian School. Like the dream houses she designs, Avedissian's life seems to synchronize the past and present, keeping the people, places, and passions of childhood close to her heart as she dreams and builds into the future.

Vahram Muratyan has produced a bestselling book, a hit blog and high-end prints for designers such as Dior, Hermes and Prada—and you should see what’s next
END_OF_DOCUMENT_TOKEN_TO_BE_REPLACED

Tigran Nazaryan has a passion for software, business, and investing in Armenia
END_OF_DOCUMENT_TOKEN_TO_BE_REPLACED

Seta Kantardjian encourages generations to connect with their heritage
END_OF_DOCUMENT_TOKEN_TO_BE_REPLACED