Almost two years after the 44-day war, the Armenians of Artsakh are trying to restore their lives, even as challenges persist. Despite bearing the heaviest burdens of war and insecurity, women are instrumental in caring and providing for their families and rehabilitating the post-war society.

Two years later, the challenges people face in this little-known corner of the Caucasus are only multiplying. The November 2020 trilateral agreement to end the hostilities signed by Armenia, Azerbaijan and Russia redrew the map of the region, displacing thousands and making an uncertain future in the process. According to the Human Rights Ombudsman of Artsakh, “Twenty thousand out of the 40,000 internally displaced persons are women, eight thousand are children. Six hundred women were widowed after the war, 12 out of 80 killed civilians were women.” Gegham Stepanyan shared the official data on women affected by the recent conflict, adding that “the fate of four missing women civilians is still unknown.” 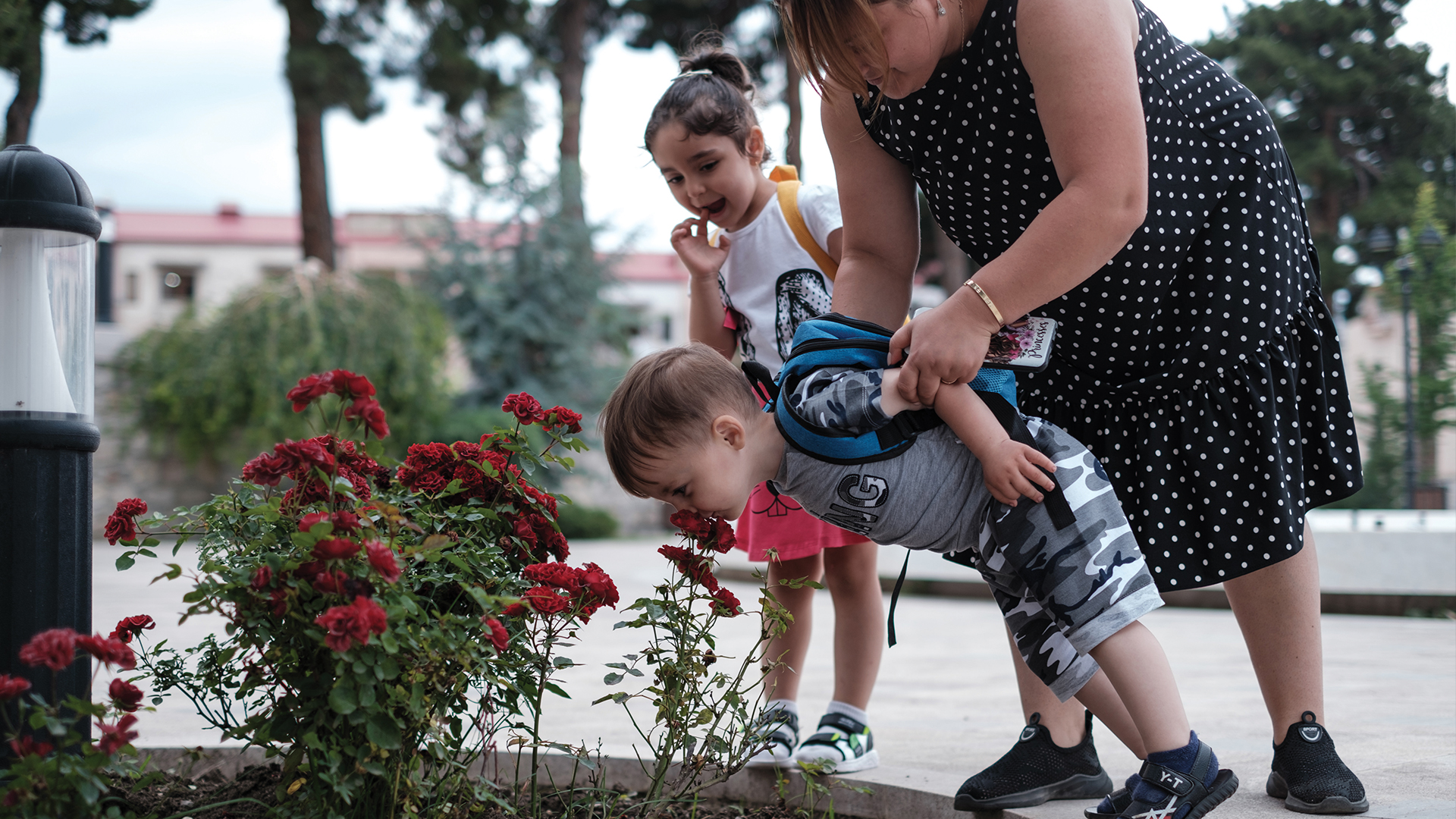 At a first glance, these figures are a drop in the sea in light of the global picture of a staggering 100 million displaced persons worldwide.  According to the UN refugee agency’s most recent report, almost one in every 78 human beings on earth is now displaced: 80% are women and children.

Yet unlike in other conflict zones, international organizations do not operate in Nagorno-Karabakh. To date the United Nations High Commissioner for Refugees (UNHCR) has failed to live up to its commitment of addressing the problems of the internally displaced under the November 2020 Statement.

Which is why local authorities have had to primarily rely on their own resources, and financial assistance coming from Armenia and the Armenian Diaspora. The Red Cross and the Russian peacekeeping contingent, deployed in the region just hours after the war, also extended a helping hand, providing humanitarian aid to local populations.

A number of studies, including UN reports, prove that women and children are most affected by armed conflicts. 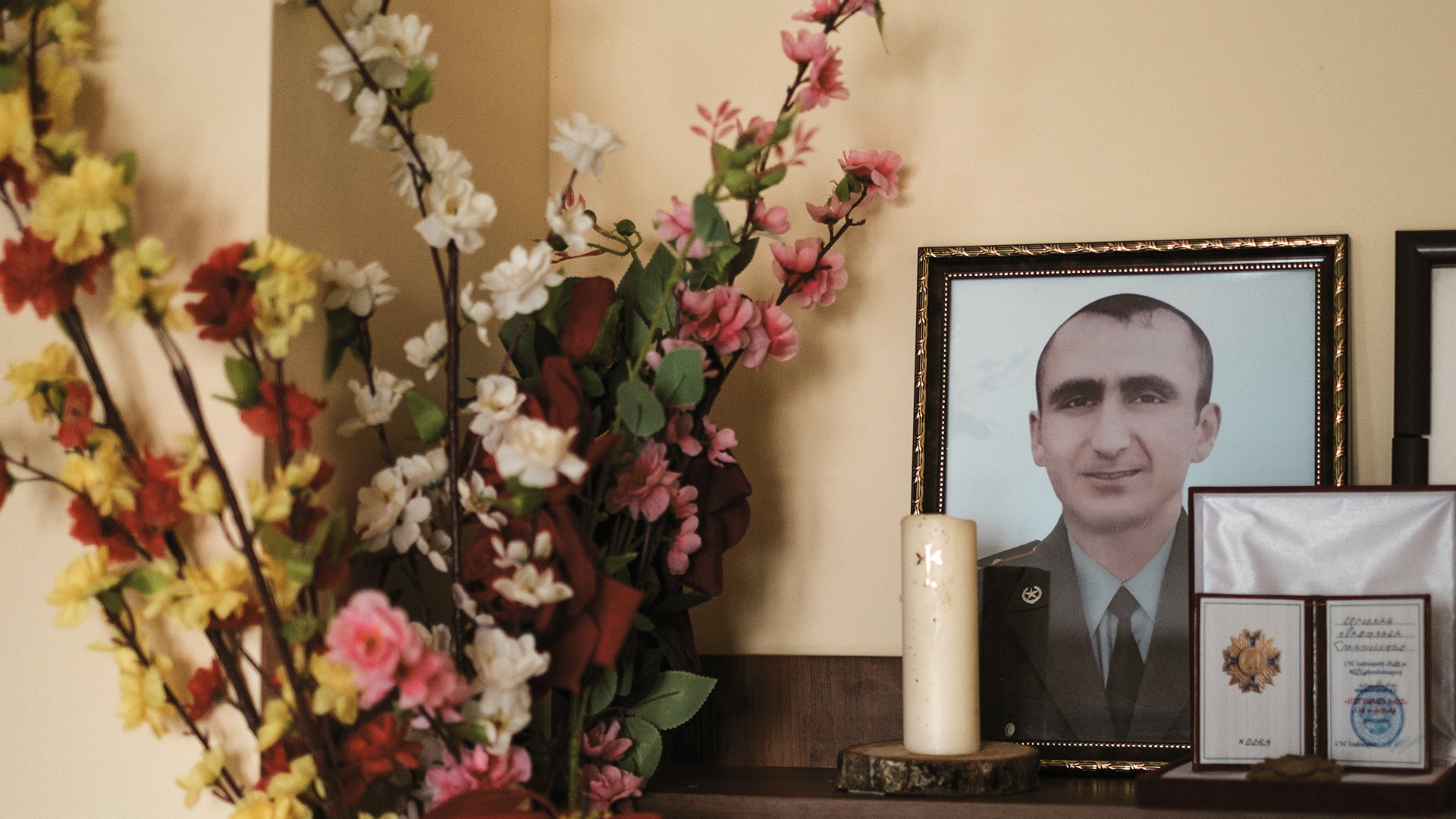 Displaced women were disproportionately affected by the loss of livelihoods caused by the war. The overwhelming majority were not able to practice their livelihoods due to loss of land, housing and livestock.

Economic empowerment is critical for women to determine the course of their lives and to reach their full potential. Meanwhile, women capacity-building programs are mainly being implemented in Yerevan, while Stepanakert and rural areas are left out. The only program aimed at women empowerment in Artsakh has been implemented by AGBU Armenia for the past three years.

Although there are “no registrations of sexual violence due to conflict,” the right to dignity is violated in many cases. For instance, “a six-member family has to live in a single-room apartment, causing hygiene and privacy problems for women and young girls,” says the 31-year-old Ombudsman. Displaced women seek jobs in Stepanakert to be able to improve their living conditions but the only option the labor market may offer them is work in the service sector, where a monthly salary is under 100 thousand AMD (~230 USD).

Still, even with such a low income, women manage to live and raise their children in Artsakh.

“I’ve become vulnerable after losing my husband,” says Elina Hurumyan, 28, a housewife, left alone with her two little kids: Anush, a 4.5 years old girl, and Armen, a 2.5 years old boy. Her husband, Captain Arayik Hurumyan was killed in Hadrut in October 2020. The family lost their home and property as their village, Mets Tagher of the Hadrut region, came under the control of Azerbaijani Armed Forces during the 44-day war.

Hurumyan is looking to the future. The Government has helped her family to solve the housing problem: she currently lives with her two children in a new condo in Stepanakert. The Armenian government supports the heirs of fallen servicemen, but legal issues and poverty sometimes translate to family feuds over resource competition. 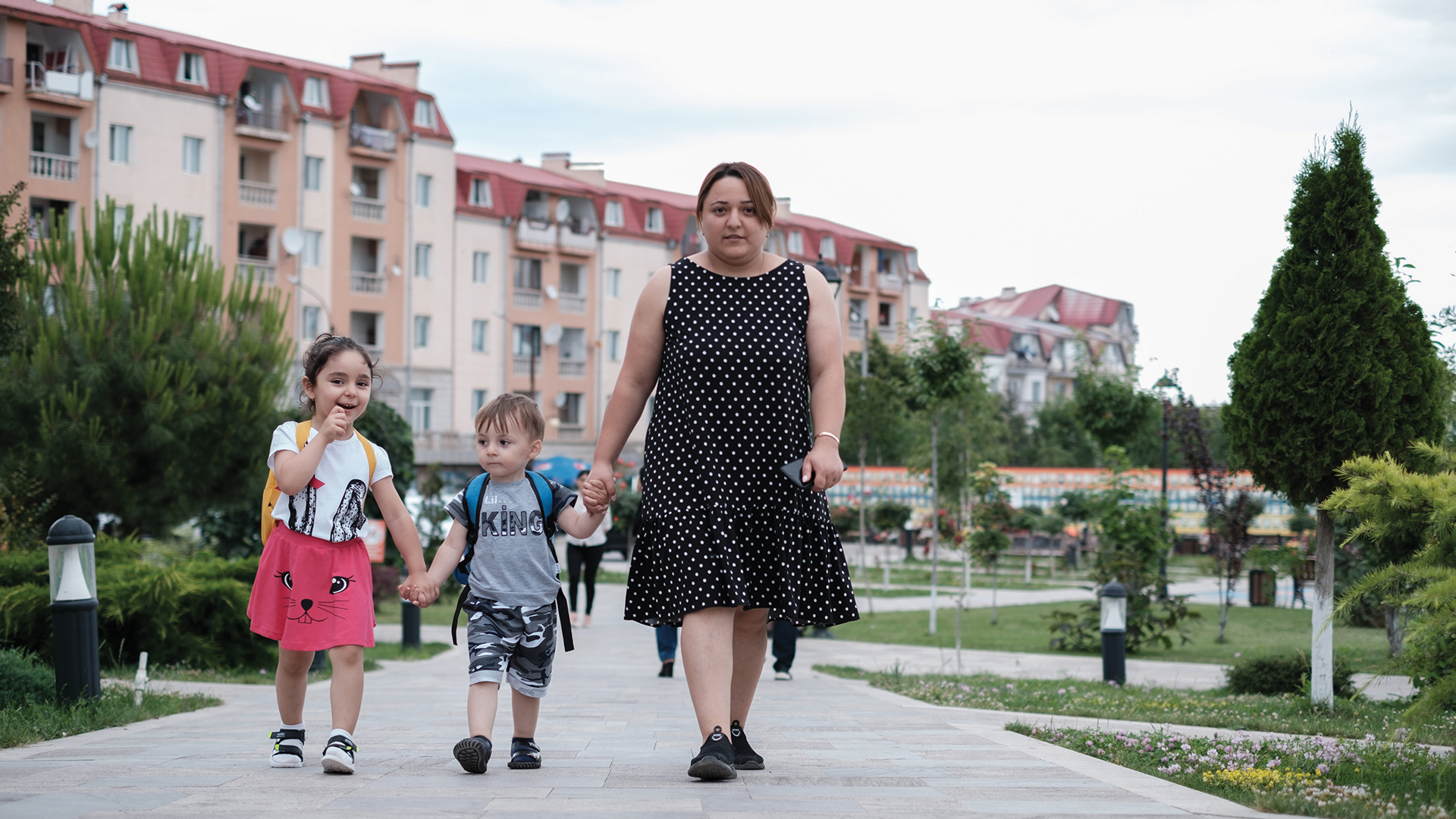 Due to the ambiguity of the law that doesn’t make it clear who the primary beneficiary is, the mother of the killed serviceman or wife, Hurumyan’s mother-in-law received the financial assistance the Military Insurance Fund provided for the killed captain Hurumyan, leaving these three without any direct financial aid.

“I feel I want to realize any wish of kids also on the part of their father and raise them the way they are not affected by incomplete family problems,” the 28-year-old widow shares.

However, the gap between a young mother’s wish and her real financial capabilities only increases as Hurumyan cannot work with little kids, meanwhile “children are growing day by day and so are their needs.” The only income of the three-member family consists of the social benefits for children that make 100 thousand AMD (~230 USD). That’s where the state social benefit policy towards families like Elina’s ends.

In Hadrut, the densely-forested mountainous terrain that Armenians called home for millennia, they owned a small business in the form of one self-service coffee making vending machine.  She remembers with excitement the moments of collecting the coins with her husband. “I know how to use it, if I could own one in Stepanakert I can provide some stable income even if it’s small in amount,” the young mother concludes.

The lack of economic opportunities is not the only challenge that women face in Artsakh. While many women are struggling against the odds to both care and provide for their families after the loss of husbands and male relatives, their peers are underrepresented in leadership positions due to male-dominated politics.

As of today, only two out of the 11-member Government are women (which translates to 18%), and only seven out of the 33-seat Parliament (21%). The picture is much worse in regional administration or state bodies: the percentage of women executives there is 0%. 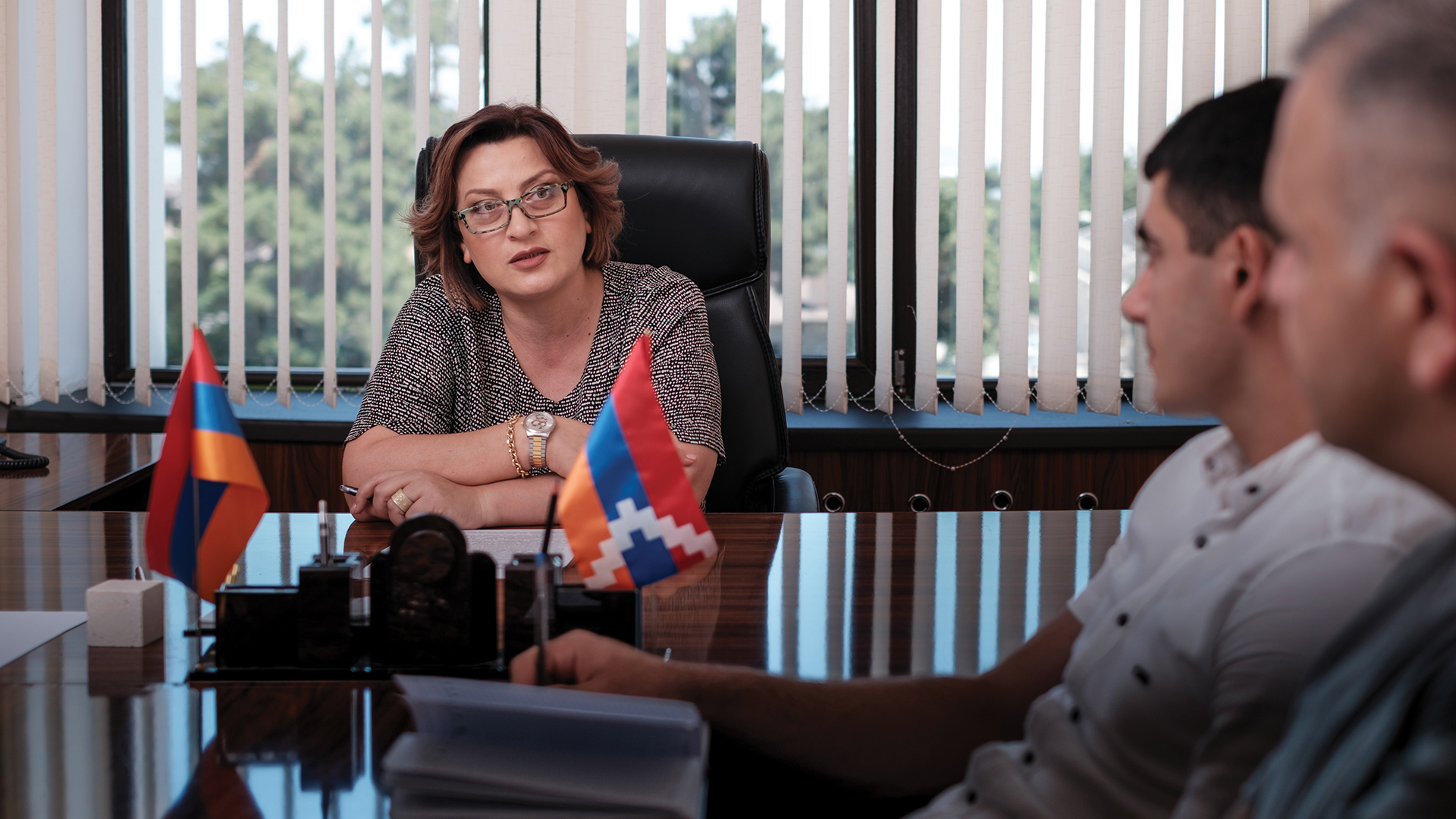 “Like anywhere else, working in the shadow of men is challenging for women in Artsakh,” says Irina Mangasaryan, 48, the chief-of-staff at the office of the Security Council of Artsakh and one of the few women to hold a top bureaucratic position.

Women in security, military, police and law enforcement, in particular, are traditionally underrepresented and underappreciated. Although many women are engaged in these state agencies, they are mainly entrusted with the work of middle and low ranks.

Mangasaryan, a lawyer by profession with experience in government work, was appointed to this position after the war. “Before the war, I could only see myself in education, culture, but not in security,” explains the chief-of-staff, emphasizing that the most challenging part of her job is working with men subordinating her. “It’s not about women’s leadership skills. We proved we can be multifunctional and deal with multitasking effectively. It’s about the perception of the role of women in leadership positions by men,” she states.

War and conflict affect all women, irrespective of their profession, position and experience. Mangasaryan with her family, son and husband stayed in Artsakh during the 44-day war. “When people were forced to flee to Armenia, I had the feeling I will not see them again,” recollects 48-year-old Irina.

However, Mangasaryan agrees with the general perception that women shook off the post-war paralysis more quickly than men, since women are more emotional, which enables them to deal with their trauma quicker and to adapt to new realities better than men, emphasizing that the soil, water and air in Artsakh, the land itself, are giving strength to move on. 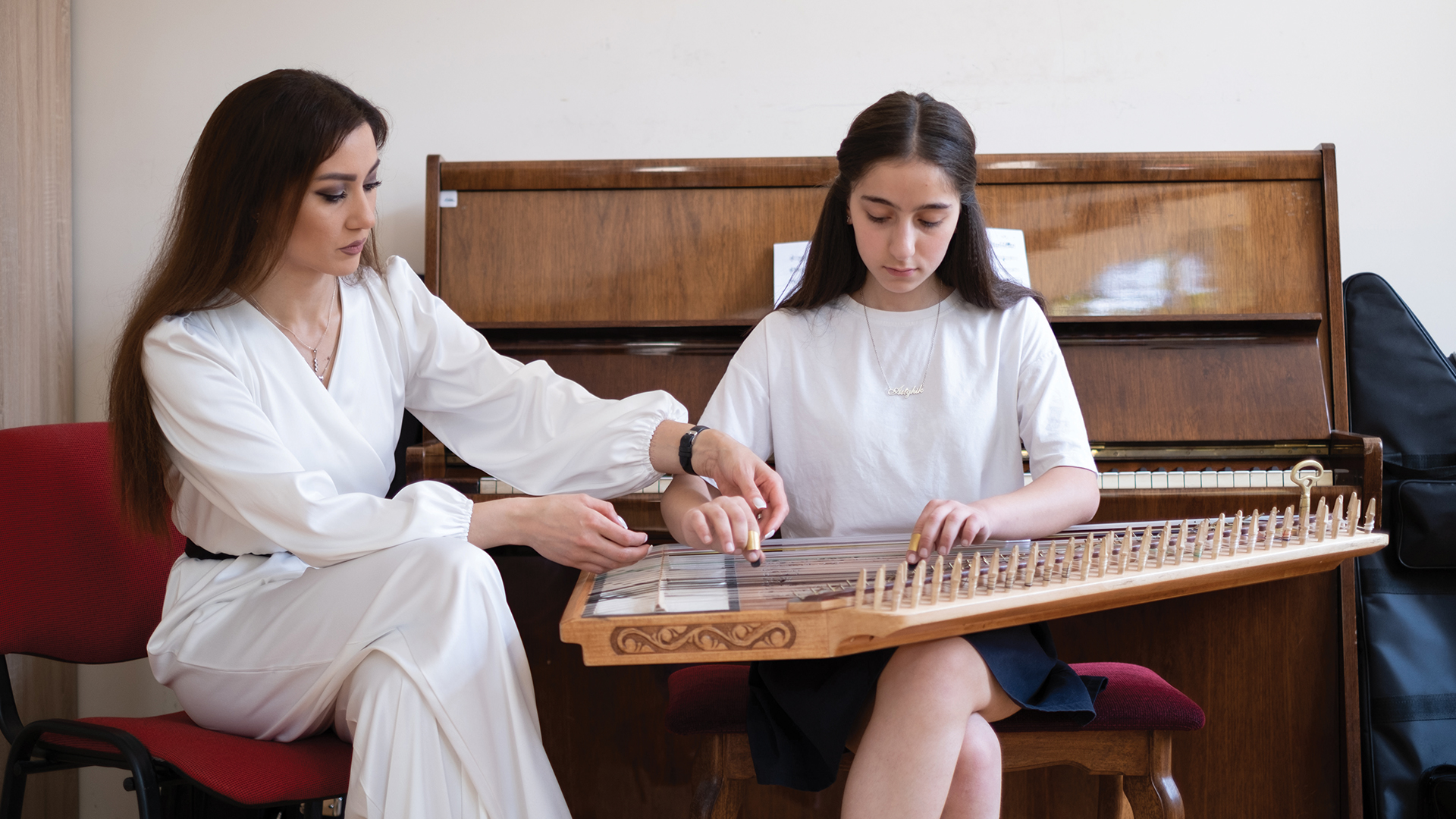 Dealing with post-war realities was also a tremendous challenge for Sirarpi Avagyan, a 33-year old musician, who teaches qanon (a traditional string instrument) at the Sayat Nova State Musical College in Stepanakert.

“It was a monumental task for a teacher to attract students back to the classroom for national music and culture lectures, given the trauma of war loss,” explains Avagyan, adding that her students couldn’t focus on education as many of them had lost relatives, their homes, all of their belongings.

The musician helped her students to overcome the psychology of war loss, while dealing with the same pressure herself. As the armed hostilities began, she had to flee to Armenia, seeking a safer place for her three little kids: “As we escaped, I could not imagine that I would ever take up my instrument again; I thought the world had ended,” remembers Avagyan, explaining that qanon is about national music and culture.

It took weeks for her to look at her instrument again. “Now I value my instrument, my work and my attitude toward Armenian culture more than ever,” says the qanon teacher with strong confidence. 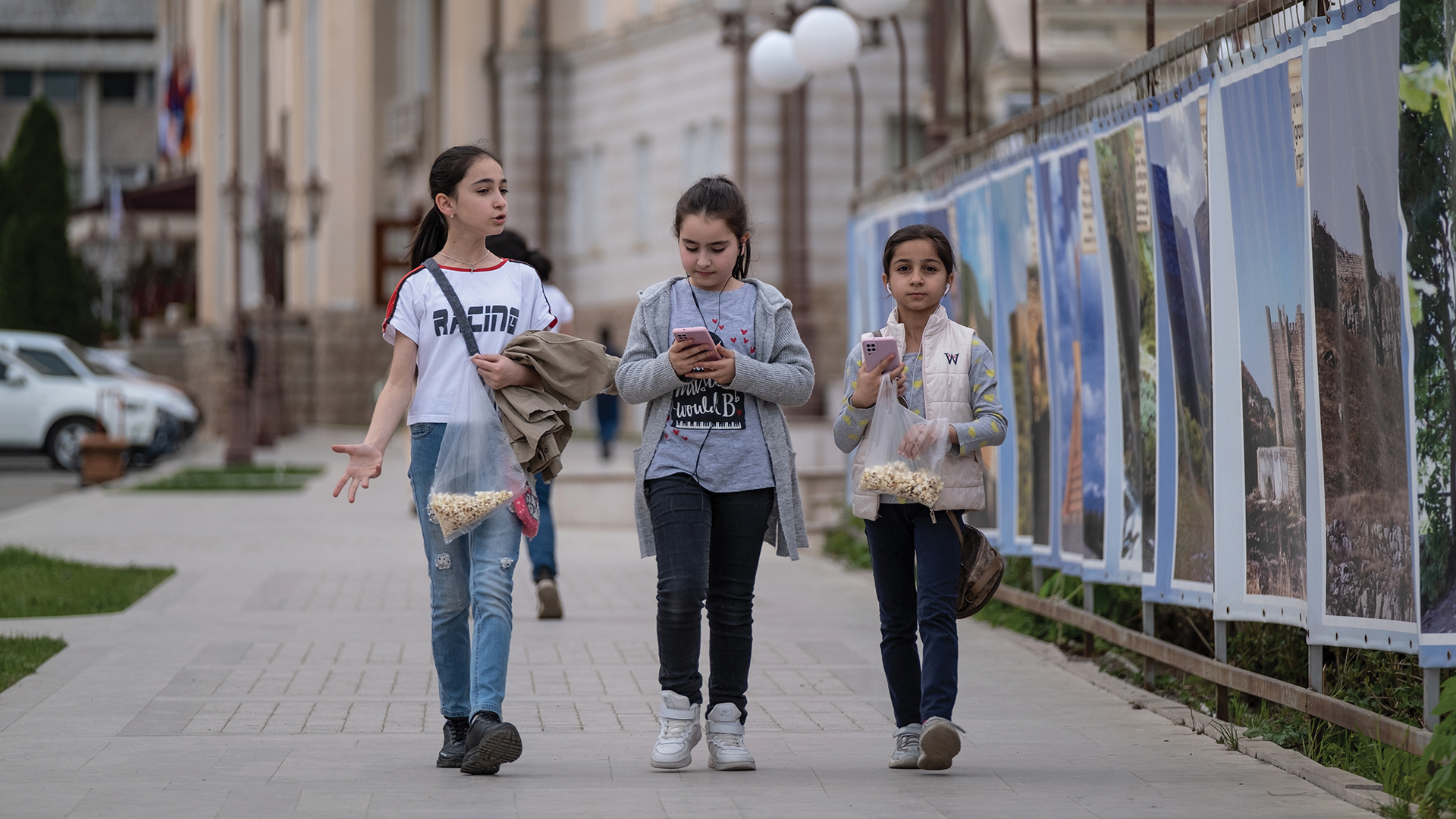 But not everyone shares her renewed appreciation. In the past months, numerous concerts, art exhibitions and other cultural events have been taking place in the capital Stepanakert and regional centers. “After a long pause, cultural life is reviving in Artsakh and my students are less depressed, but the attitude toward traditional Armenian music is not growing.”

However, she is not giving up.  She is leading by example to convince the younger generation of the beauty, relevance, and healing nature of Armenian national instruments and music. Art therapy is not about distraction: it can be a powerful way to express and work through pain. To relate to the trauma that her students have been undergoing, Avagyan decided to perform on stage for fallen heroes.

Keeping Artsakh Armenian is the number one priority for Avagyan. “We are always ready to die for our homeland,” she says. “But more important than that is to unite around our culture, our identity and to live for our homeland.”

For the people of Artsakh, that means living in the homeland, like they have for millennia. Despite all odds, women are leading that sacred mission.

The portrayal of heroic women in Armenian myths, legends, and fables
END_OF_DOCUMENT_TOKEN_TO_BE_REPLACED

Unlikely global icons and celebrities who have visited Armenia
END_OF_DOCUMENT_TOKEN_TO_BE_REPLACED