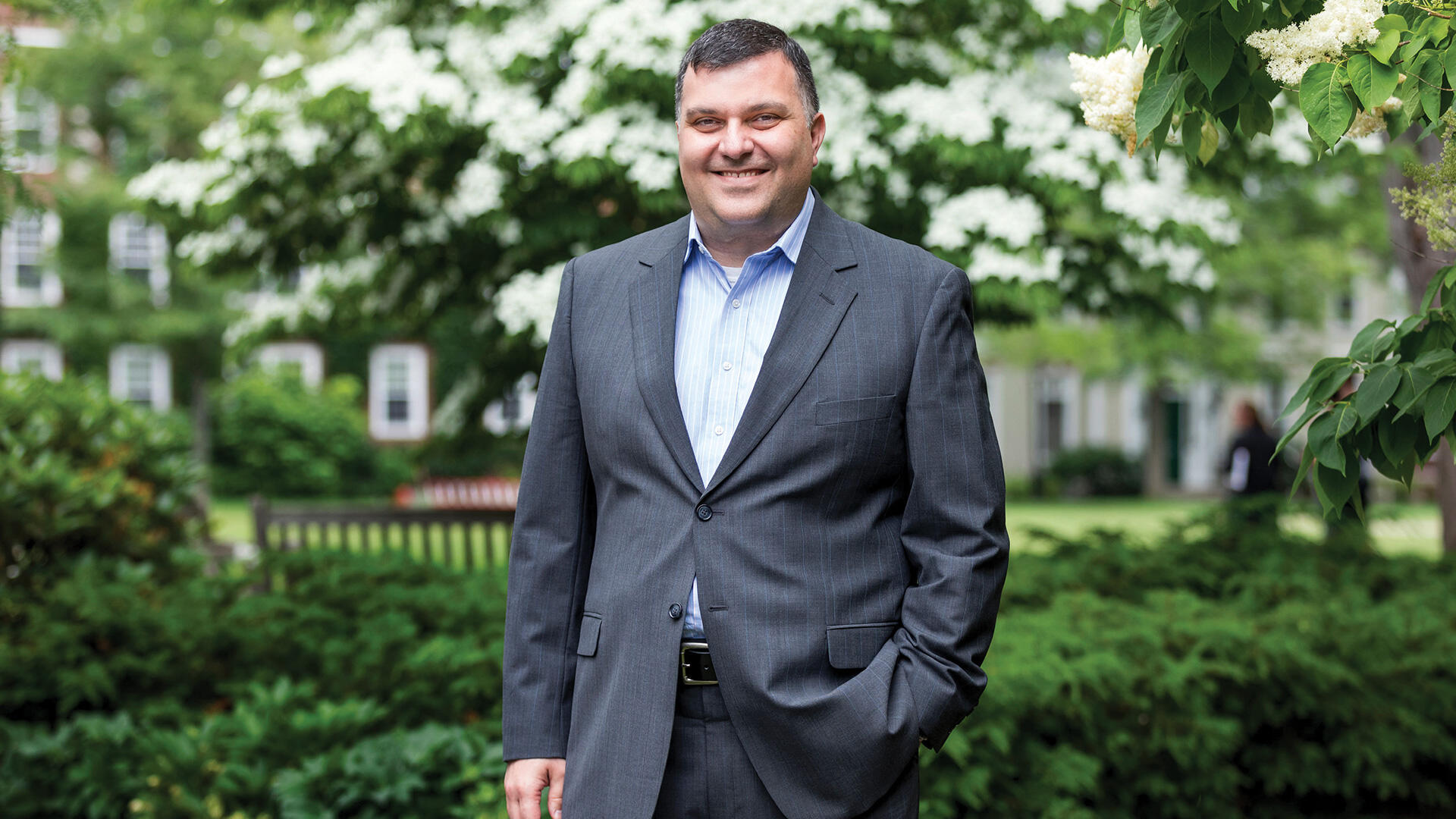 
Looking at the impressive resume of Gevorg Abrahamian, Babson MBA, Harvard Business School Analytics Program graduate, and a senior director of product management at the global tech giant Oracle Corporation, one could reasonably assume he followed the same path as millions of students educated at high schools and universities across America. Yet Abrahamian’s back story is perhaps even more compelling than his success story, considering the hurdles he overcame through serendipitous events set in motion by his own pluck, drive, and intention. “My whole life has been a series of moments like that,” Abrahamian observes, as he takes stock of the improbable trajectory of his life.

The first of these events began 6,000 miles away and 26 years ago in a cold and dark Soviet-style apartment in what was then the dusty old city of Yerevan, during the height of Azerbaijan’s economic blockade against Armenia. Life for 16 year-old Gevorg, his parents, and older brother was a daily struggle for survival. With no heat, light, or electricity, a collapsed economy, and uncertain livelihood for his astronomer father and educator mother, the bleak conditions facing the newborn independent republic could have cast a long shadow over the teen’s outlook. But, in young Gevorg’s mind, he had nothing to lose by thinking big.

When he heard about an essay contest for a chance to come to America for one year as an exchange student as part of a program sponsored by the U.S. Congress, he decided to throw his hat in the ring. After all, he had worked hard all winter to become somewhat proficient in written English.

Writing his essay by candlelight, he never could have imagined that the twin flame of ambition and opportunity would continue to burn brightly across the many miles he has traveled over his professional and personal journey since the early 1990s.

He was among the 32 contest winners in a field of 1,300. He wound up in the Clearwater area of Florida, attending a public school and living with a host family hailing from Alabama. The experience at once expanded his perception of America, and, given the homogeneous society in which he was raised, forced him to see himself as an ethnic minority for the first time.

A year later, he was back in Yerevan, informed by the possibilities and potentials that life outside Armenia could afford him and enlarging the canvas on which to paint a vision for his life. This now included enrolling in an American university to pursue a higher education. The only hitch was a program requirement that he return to Armenia and re-apply for a student visa proving he had the funding for his education.

For all the chances I took to move my life forward, there were amazing people who appeared at the right time and place to take a chance on me.

With the help of the Armenian American community, Abrahamian was able to secure the necessary papers to return to America. By the fall semester, he was enrolled at St. Petersburg College, living with the same host family who helped him in so many ways, including saving money on room and board. Abrahamian worked part-time, and paid for his education with the help of his Armenian American friends and whatever meager funds his parents could muster to help give their hardworking son the fighting chance he deserved.

It was during this time that he received another tip, this time from one of his friends from the exchange program. Apparently, AGBU offered a special Summer Internship Program that promised real-world work experience in none other than the business capital of the world—New York City. Majoring in finance with a specialty in accounting, Abrahamian was intrigued. But another barrier loomed ahead: paying for lodgings and other living expenses in a city with one of the highest costs of living in America. How could an undergrad of little means from Armenia even think of applying? But this was exactly what Abrahamian did.

Once again, his application was accepted and an AGBU scholarship helped fund his two-month stay in New York. It was a turning point that would change his life fundamentally.

By day, he was immersed in the world of finance at the prestigious Bank of New York, interning under the supervision of Vahe Balouzian, who ran the International Personal Asset Management department.

After work, Abrahamian engaged in another life-changing activity—bonding with fellow Armenians from across the world. “Here I was from Armenia, socializing with other interns from France, the West Coast, Lebanon, the Middle East, even Australia. It was a revelation to be in the company of young people from different backgrounds who had the same goals and ambitions. I realized just how diverse we are as a people but how we are also very much the same,” he reflects. “I can’t stress enough how key the Armenian component was for me because I came from Armenia with a certain perception of who Armenians were and who they were not. That notion completely changed by the time the program was over.”

The professional track of the two- month internship was also an eyeopener for Abrahamian. Recognizing the value of gaining real-world exposure to subjects he was learning in class, the following year he applied for a second internship independently and returned to the same Bank of New York team, cementing friendships with co-workers that have lasted till this day.

Perhaps his greatest lesson was that nobody succeeds in life without the support and guidance, the generosity of spirit and resources of others. “For all the chances I took to move my life forward, there were amazing people who appeared at the right time and place to take a chance on me,” Abrahamian insists, citing his host family back in Florida, with whom he remains close, and his supporters from the Armenian community in the U.S.

“Back in 1995, when I applied to the AGBU New York Internship Program, I had nothing. But someone I don’t know stepped up and paid for my stay in New York. I am eternally grateful to him or her, not just because of the program but also because of the people I met through the program like Vahe Balouzian and the warm and caring people at AGBU.”

The experience planted another ambition in Abrahamian, to one day be in a position to be on the giving rather than receiving end. By consistently supporting AGBU, Abrahamian and his wife Seta, hope to help provide other Armenians in need with opportunities for success. They also strive to set an example for their children to support Armenian causes. The AGBU Summer Internship program is an excellent way for the younger generation of Armenians to grow professionally while getting to know fellow Armenians from all over the world.

Upon reflection, Abrahamian ponders the odds of his life unfolding as it did. Based on the series of fortunate events, Gevorg Abrahamian has reaped the rewards of his enterprising actions many times over, perhaps the greatest of which is the chance to give back to the AGBU New York Summer Internship Program.

“For me,” says Abrahamian,” helping transform someone’s life for the better is the ultimate success.”

Banner photo: Now in the prime of his career, Abrahamian, who has been with Oracle Corporation since 1998, is focused on corporate financial systems for enterprise performance management that integrate such disciplines as analytics and machine learning with forecasting and predictive planning. At the same time, as a husband and father, he is intent on sharing with his family the strong Armenian identity that his mother, who taught Armenian literature, instilled in him. Photo by Caitlin Cunningham Photography

Nathalie Piranian reflects on her involvement through the years
END_OF_DOCUMENT_TOKEN_TO_BE_REPLACED