Few people have made a name for themselves like Kim Kardashian. The mother of four, breaker of the Internet, reigning selfie queen, and attorney-in-the-making has skillfully clawed her way to the top, coming a long way from her roots as a fourth-generation Armenian-American retail employee and personal stylist to Los Angeles starlets. Not a day goes by without her name strewn across headlines, thanks to the paparazzi eagerly monitoring every step she makes—fueling the parasocial investment the world has with the forever timeless “It Girl.”

There’s more than meets the eye to her public image. Featured in “Keeping Up with the Kardashians” (E!) with her two Armenian-American sisters Kourtney and Khloé, she rose to superstardom. The show became the longest-running reality television series in the United States and the network’s most successful show. According to Forbes, the media personality is now worth $1.8 billion and counting, making her the sixteenth richest American self-made woman in 2022.

But underneath the buzzy headlines and sparkling perfect image, Kim Kardashian remains steadfast and hustles—never buckling down from the worldwide pressure of the public eye. Kardashian is simultaneously a long-time sex symbol and prison reform advocate, a billion-dollar business mogul and matriarchal family figure, a recently-awarded lawyer and highly-desired model—she appears to do it all, even when her identities seem to contradict one another. 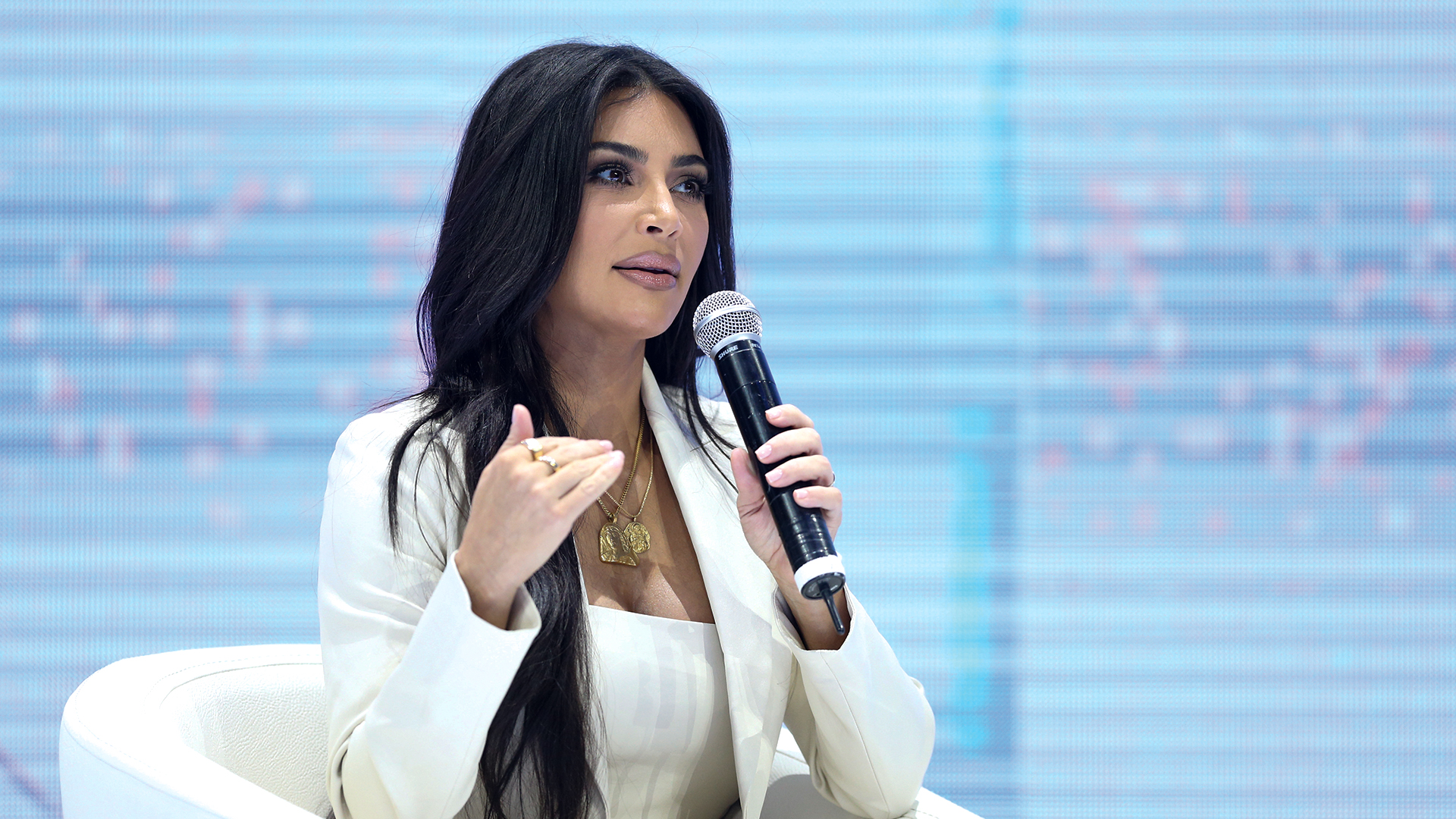 Despite her untouchable fame, Kardashian has always used her star power to raise awareness of her Armenian roots—which she largely credits to her late father Robert Kardashian, a third-generation American-Armenian, businessman, and worldwide-known attorney. “My Armenian heritage means a lot to me and I’ve been brought up to be incredibly proud of my family’s background and culture,” she wrote on her blog in 2012, shortly after facing backlash when Cosmpolitan Turkey ran her cover story in April, Armenian Genocide Awareness month.

She’s taken to social media to share her favorite Armenian meals and traditions, and in 2015 she and her sister Khloé headed to Armenia to commemorate the 100th anniversary of the Armenian Genocide to honor their grandparents and father who never got the chance to go. In 2019, she headlined WCIT Armenia to discuss decentralized technologies and the democratization of information, only to baptize her three youngest children at the Etchmiadzin Cathedral the following Monday according to People. 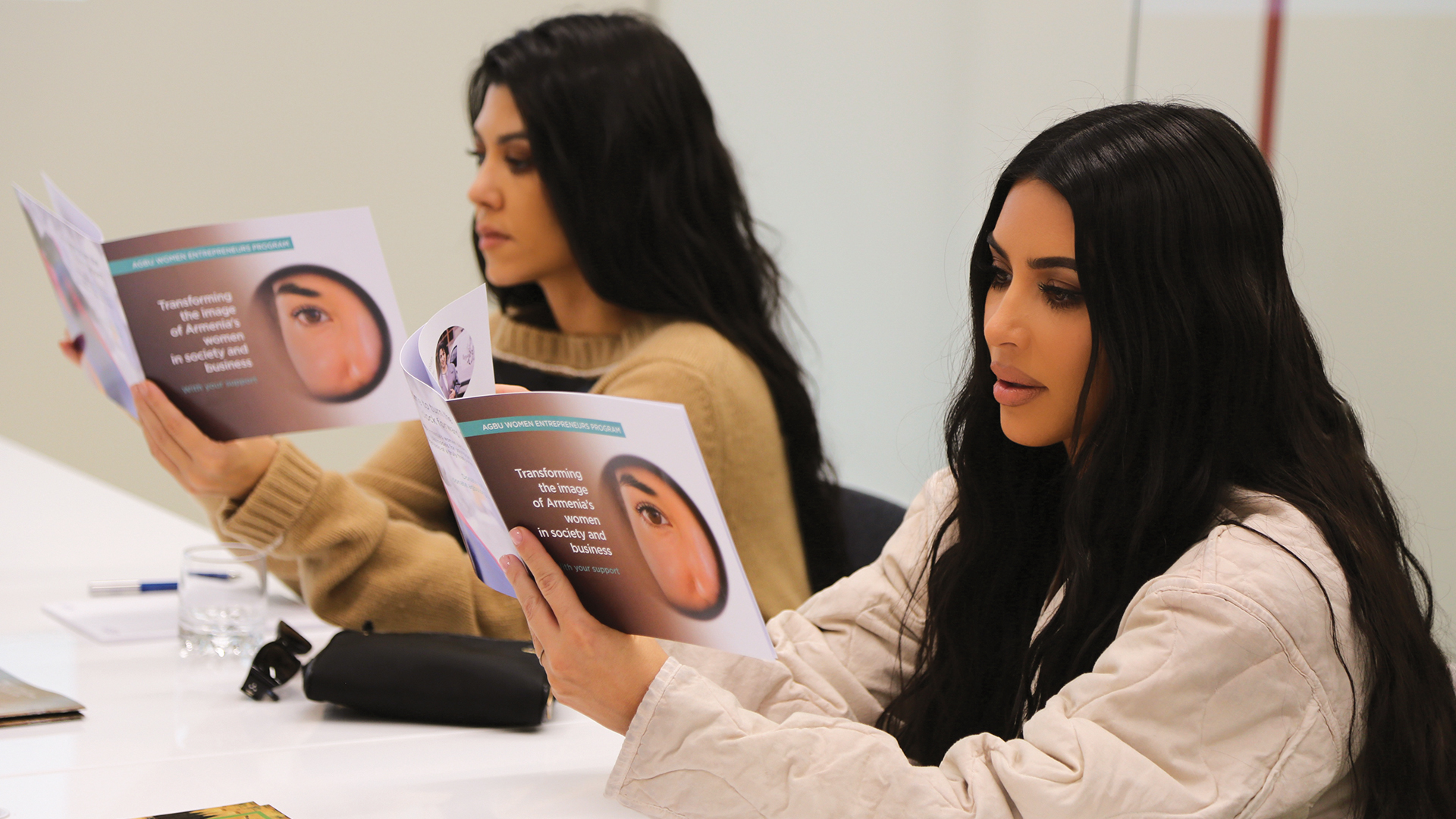 "My Armenian heritage means a lot to me and I’ve been brought up to be incredibly proud of my family’s background and culture."

Her sister Kourtney, who was visiting Armenia for the first time, also baptized her three children, and the two sisters decided to be baptized in the Armenian Apostolic tradition along with them. In 2015, Kim Kardashian’s firstborn North was baptized in the Holy Cathedral of St. James in the historic Armenian Quarter of the Old City of Jerusalem. She’s been vocal about her Armenian identity and has advocated for genocide recognition, penning a 2015 Time article using her own family heritage to call for action. “My great-great-grandparents came from Armenia to Los Angeles in 1914, right before the genocide happened…Had they not escaped, we wouldn’t be here. There are so many people who lost their families, and the stories of how they were killed are so heartbreaking—they should never be forgotten,” she wrote.

During the 2020 Artsakh War, she partnered with AGBU Board Member, UCLA physician Eric Esrailian, an Emmy-nominated film producer and founder of the Promise Armenian Institute (UCLA) and the Promise Institute for Human Rights (UCLA Law) to circulate the news on social media, making sure to highlight inconsistent and selective reporting.“The news is misleading & these are not ‘clashes’... Armenia has been the victim of unprovoked attacks by Azerbaijan & the predictable disinformation campaign that accompanies them,” she shared on social media, garnering almost 600,000 likes with one post.

She later donated $1 million to the Armenia Fund and urged her followers to contribute as well, writing: “My thoughts and prayers are with the brave men, women, and children. I want everyone to remember that despite the distance that separates us, we are not limited by borders and we are one global Armenian nation together.” Azerbaijan’s ambassador to the U.S. Elin Suleymanov later attacked this move in an interview with Foreign Policy, fueling online bots and trolls to target her page. 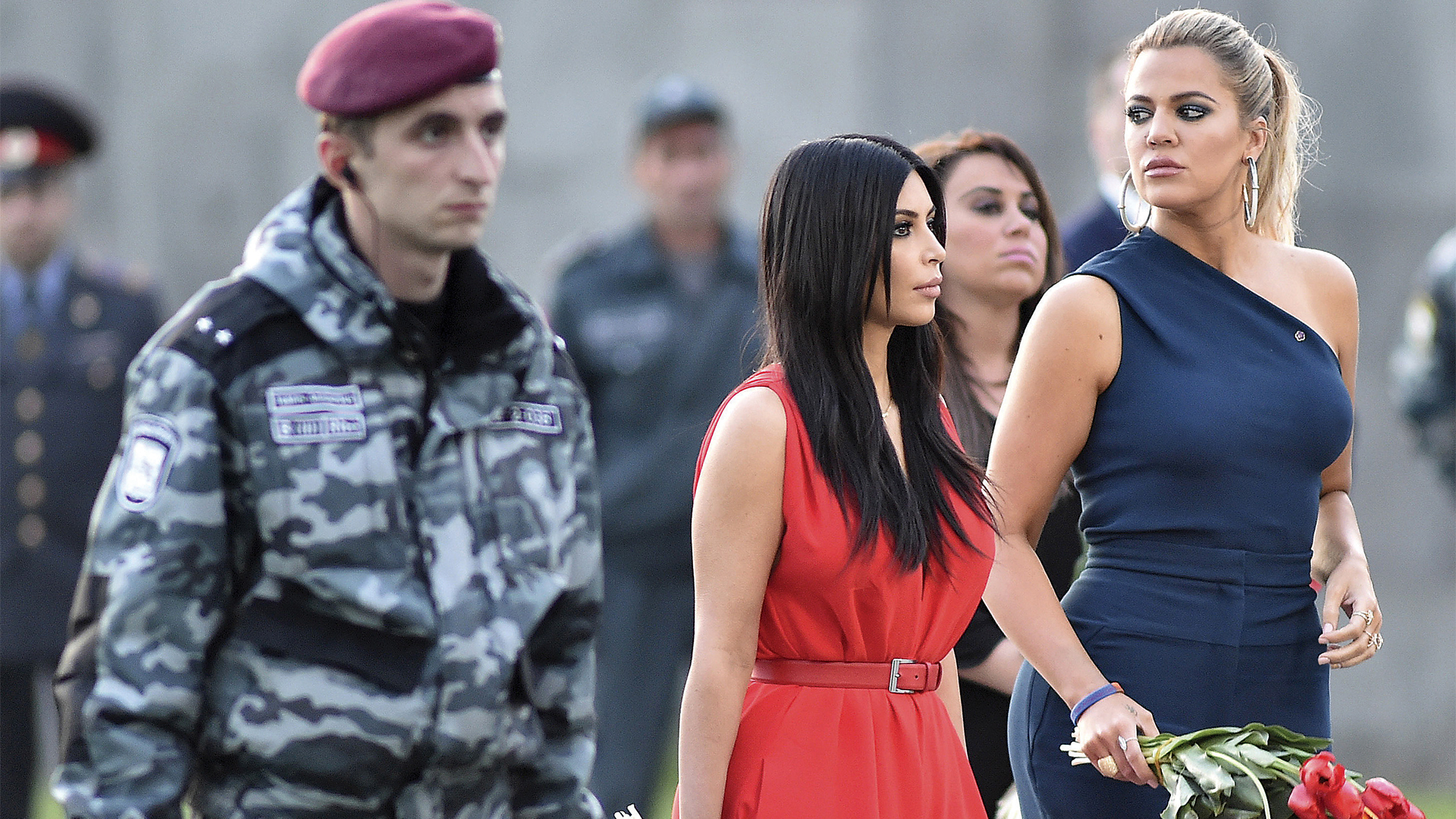 She sparked high-level debates on body image in the era of social media, cultural appropriation of minority communities, and fertility issues like IVF and surrogacy. At the same time she graced the glossy covers of Vogue, she apprenticed for human rights attorney Jessica Jackson, studying 18 hours a week for the bar while filming a new run of “The Kardashians” (Hulu). She launched her own mobile game, music, and released a book of selfies, aptly titled Selfish.

She’s walked the famed red carpet of the Met Gala and at other times, has been stalked and even held at gunpoint begging for her life, only to return to social media unscathed. Media attention focused on her now-infamous decision to wear Marilyn Monroe’s dress as opposed to the leaked news of the Supreme Court’s plan to overturn Roe v. Wade. No matter the times, the Kardashians are viral media machines topping every algorithm, news outlet, and medium.

Today, she is one of the most famous figures in the world. According to Statistica, Kardashian is the eighth-most followed figure on Instagram at 314 million fans, even exceeding brands like Nike, Amazon, and Apple by leaps and bounds. In 2015, she was reported to be one of the highest-paid reality television personalities with estimated total earnings exceeding $53 million with Time Magazine naming her one of the 100 most influential people the same year.

The multi-faceted household name is a widely contested public figure—especially within the Armenian community. Though she brings Armenians much-needed media representation, some question if her contributions garner the right kind of image. Either way, the “Keeping Up With the Kardashians” star is distinctively Armenian and has successfully turned her large close-knit family, dark features, and curvy body type into the ideal beauty standard and family model—no small feat in the era of blonde, emaciated socialites hailing from wealthy trust funds of the early aughts. 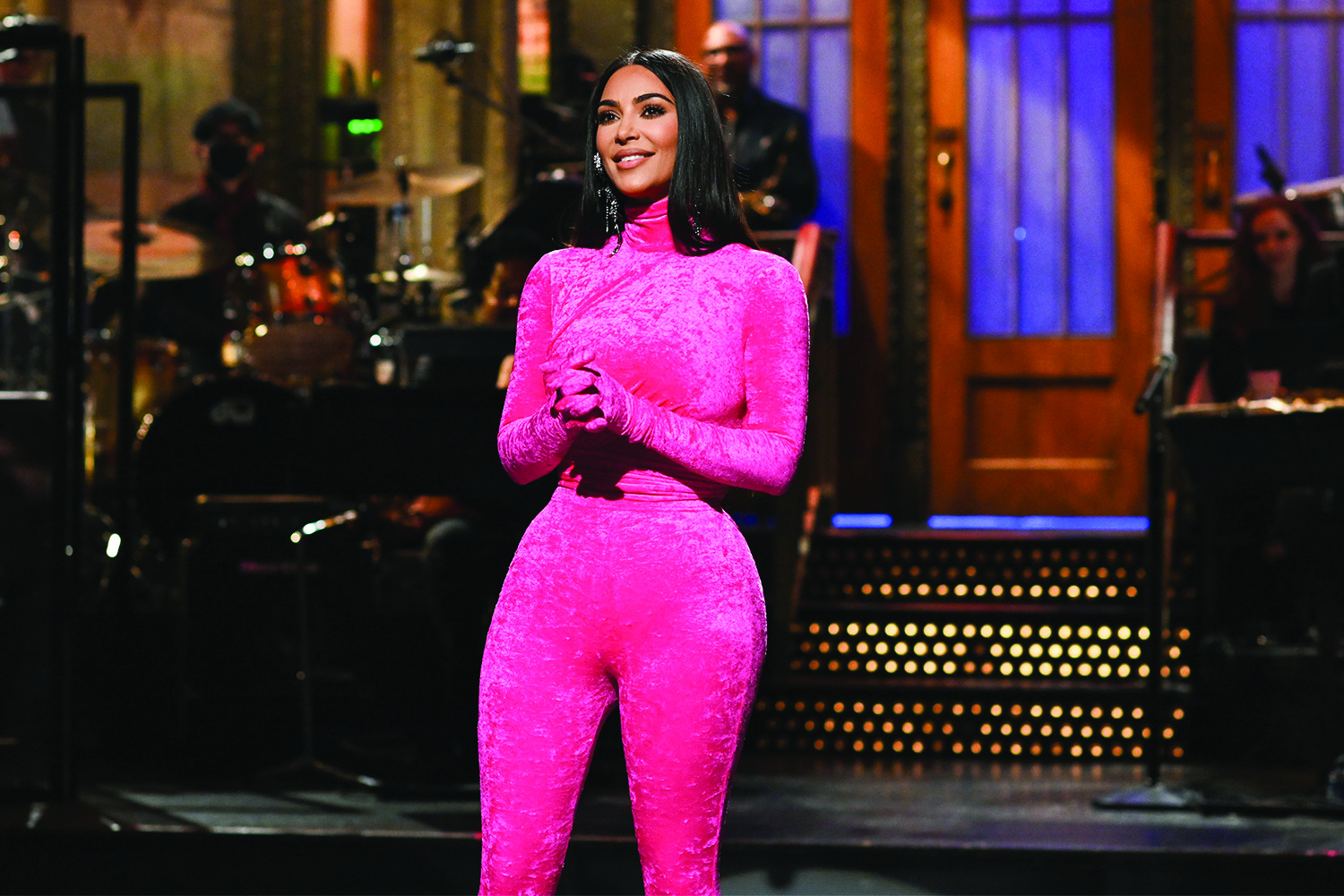 Others also felt that any of her efforts to bring attention to important matters—whether Armenian or not—“are obscured by all the media attention given to her personal life and latest fashion statements.” In counterpoint, one respondent pointed out all Kim Kardashian’s latest achievements are indicative of her evolution as a public figure and business leader. Another respondent noted: “She said she wanted to be a lawyer, became an apprentice at a San Francisco law firm, then studied for and passed the ‘baby’ bar. She was asked to host Saturday Night Live and was hilarious. Her SKIMS clothing line is great.”

Another mentioned how she has used her status of celebrity to raise awareness of Armenian issues and causes. “There’s really no inherent benefit to her brand or business to speak out on behalf of Armenians, such as Genocide Recognition and the Azeri attack on Artsakh in 2020. It’s obviously coming from a very genuine place of ethnic pride.”

What’s more, while those surveyed largely found her looks to be aspirational, 61.3% felt that they saw their body type and features represented by Kim Kardashian. Unpacking this further, a whopping 66.7% agreed that Kim Kardashian’s image has changed their own perception of body image throughout the years. A handful echoed the fact that she made curvy bodies fashionable, with one respondent sharing “she has changed the beauty standards for Middle-Eastern-looking women and women who are on the thicker side.”

“I want everyone to remember that despite the distance that separates us, we are not limited by borders and we are one global Armenian nation together.”

Clearly, the social media-driven Kardashian brand has deeply impacted the self-image and core values of women, especially Armenian women who feel connected to her on various levels. 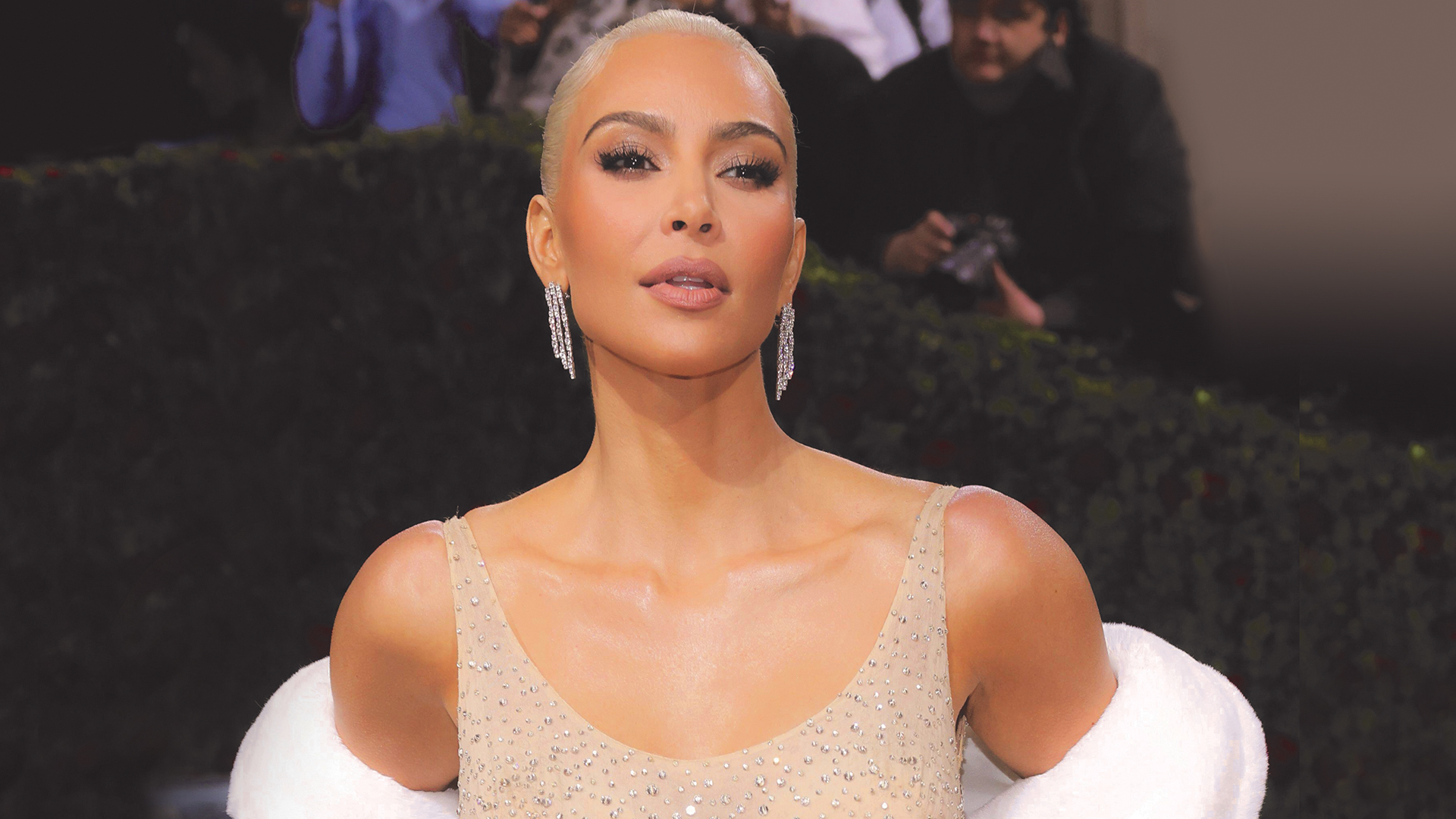 It is undeniable that this is the first time in modern media history that Armenians can find identification and representation through a global icon that shares her ancestry and bears the physical characteristics of the stereotypical Armenian, only idealized. One anonymous respondent put it best, “There are so few representations of Armenian women in the media, it’s unfair to put the burden of it all on one woman alone.”

Representations of women, in general, are unrealistic in the media, and Kim is no exception—but there is a lot to admire about her—her poise, her strength, her smarts. As one respondent from an older generation opined: “She’s a powerful woman and the fact that she is Armenian and embraces it, is pretty great.”

Her success only continues to reach new heights. In 2022, Forbes reported her shapewear line SKIMS doubled its value to $3.2 billion, after raising $240 million in fresh funding. Her latest season of “The Kardashians” shattered streaming records at Hulu. Her name is even used as a scientific index as a measure of discrepant social media profiles, known as “The Kardashian Index” (Hall, 2014). Controversy she may spark, a factor that is baked into her brand, her continued influence and clout in the public sphere is only bound to increase.

As one Armenian-American mother of two put it, “Thanks to Kim Kardashian, my children and so many other Armenians around the world will never have to answer the question, ‘What’s an Armenian?’”

The portrayal of heroic women in Armenian myths, legends, and fables
END_OF_DOCUMENT_TOKEN_TO_BE_REPLACED

Unlikely global icons and celebrities who have visited Armenia
END_OF_DOCUMENT_TOKEN_TO_BE_REPLACED