The portrayal of heroic women in Armenian myths, legends, and fables

Classical narratives passed down through generations often endow their protagonists with exceptional features and virtues, designed to shape collective perceptions and ideals among youth. For centuries, societies have constructed national identities grounded in stories of heroes and heroines. The portrayals mostly focus on super human male attributes of intelligence, strength, and bravery, while women are exalted for their physical appearance and virtues associated with obedience, modesty, and motherhood.

However, unlike classic Western European fairy tales that revolve around the adventures and travails of princes and princesses, Armenian stories, tales and fables of both the pagan and early Christian era often depict women as wise, courageous, self-composed, and independent representatives in society. These free spirits can hold their own without being rescued by a handsome prince and can express their will and even die for their principles. As pillars of formal socialization and youth culture, many such stories are as relevant today as when they were first conceived.

From the 1st century BC to the 3rd century AD, the cult of goddess Anahit emerged, although initially, she was not assigned gendered characteristic features. Therefore, the early narratives of Anahit portrayed her as accountable for military and patronage, able to influence the fate of a nation and fight against unrighteous enemies. Only later was she given a more female role to represent motherhood, fertility, and waters. In Zoroastrian mythology, Anahit was also responsible for protecting the earth from danger coming from Venus, as the religion back then believed that earth was menaced by other planets.

One of the Armenian kings Tiridates III possessed an ardent devotion toward the goddess. Historical manuscripts of the fifth century by Agathangelos indicate that he characterized her as “the glory of the nation and its savior,” a virtue commonly ascribed to men. He also referred to her as “a great lady” and “birth mother” of all virtues,” as well as the “benefactress of human nature.” Tiridates’ reverence for Anahit is proven further when he imprisons Gregory the Illuminator for 14 years because he refused to honor the goddess with a wreath of flowers.

These free spirits can hold their own without being rescued by a handsome prince and can express their will and even die for their principles.

Anahit had such a powerful influence during pagan times that sacrificing males or females in her temple was considered a pious ritual.

To date, Anahit is one of the few pagan goddesses whose legacy has extended to modern times. Despite the huge efforts of Christianity to eradicate anything pagan, the name Anahit, which means immaculate, has become one of the most famous female Armenian names of all time. The goddess has become a source of inspiration for several artists, including Rubik Kocharian with his Pomegranate Dance at Anahit’s Festival painting.

Moreover, right after the Declaration of Independence of Armenia in 1991, the Armenian Central Bank issued the first series of the Armenian dram, from 10 AMD the lowest to 5000 AMD the highest monetary unit. The currency depicted the temple of Garni on one side and the statue of goddess Anahit on the other. In 1997, the Central Bank of Armenia also issued a limited number of gold coins with Anahit’s visage, equivalent to 25,000 AMD. Her statue is exhibited in the British Museum and until recently Armenian cultural experts have been making huge efforts to bring this masterpiece back to the homeland for national exhibition. 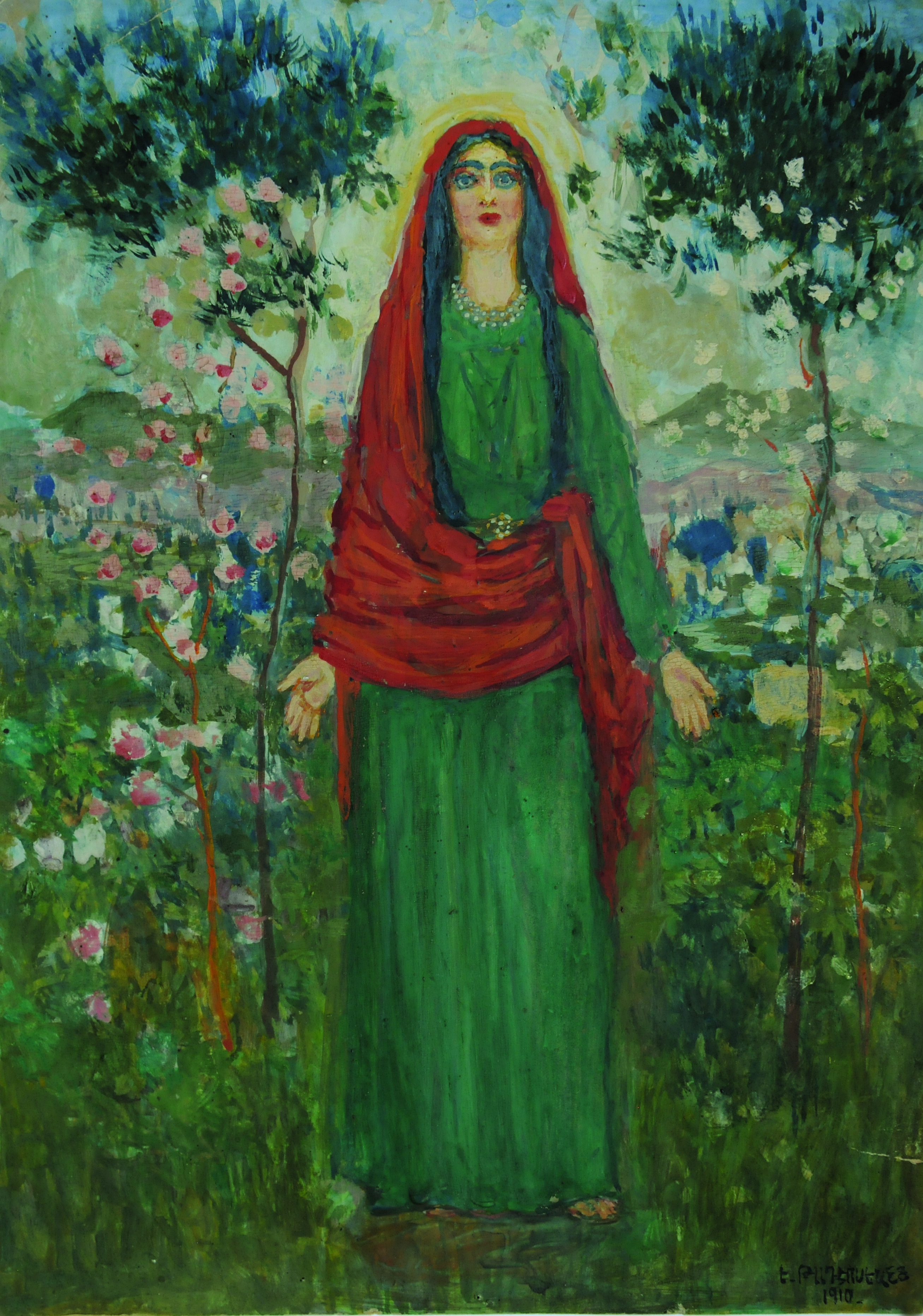 The legend of Ara Geghetsik and Semiramis relates to the unwavering love and devotion of the Armenian King Ara the Handsome to his homeland and particularly to his wife Nuard. Geghetsik means beautiful in Armenian and Assyrian Queen Semiramis, allured by King Ara’s handsome mien and noble bearing, organized a delegation to the Armenian Kingdom to offer him her heart and throne. At the palace, Nuard was seated next to the King as his companion, and demonstrably indicated her dismay upon learning of Semiramis’ proposal. “The Armenian Queen Nuard could not bear these affectionate words. She hastily embraced their little heir and went out of the palace […] Ara put himself together and furiously demanded the delegation to hold their tongues. Then turning to Nuard, he said entreatingly, ‘Hold on Nuard! Listen to my response first.’”

When the delegation articulated Semiramis’ desire, Ara solemnly rejected them, saying “I won’t betray my homeland which I love more than life itself. I won’t betray my Nuard, who I love more than life itself.” Soon after, Semiramis, wounded and outraged, declared war on the King, yet asking every soldier of hers to bring Ara unharmed, safe and sound. In the meantime, Nuard also displayed her dignity as she bid him goodbye before he went off the war, admonishing him to resist to the death Semiramis’ allures. During the battle, Ara sustained an arrow to his heart. When dusk settled over the battlefield, Semiramis found him dying among the wounded soldiers. Throwing one last glance at the Assyrian queen, he uttered his last words, “Goodbye my Armenian land, goodbye my Nuard.”

Though the story predominantly revolves around Ara and Semiramis, the strength, decisive character, and dignity of Nuard indirectly impress the reader throughout the narrative. The legend was first written down by an Armenian historiographer Movses Khorenatsi in the fifth century. Later, several prominent Armenian writers, such as Vahan Teryan, Yeghishe Charents, Hovhannes Shiraz and Nairi Zaryan, reflected the plot in their ballads and poems. In 1899, a famous Armenian Artist Vardges Sureniants painted Semiramis next to Ara’s dying body. In 1945, Hakob Kojoyan illustrated Semiramis meeting Nuard for N. Zarian’s historical tragedy Ara the Handsome. To the Armenian reader, the legend is renowned for a single sentence rewritten by Vahan Teryan. “I won’t betray my Nuard, however you allure me, oh Semiramis.”

The martyrdom of Hripsimian Virgins is a historical narrative about 37 young maidens who were so strong in spirit that they sacrificed their lives for the sake of their principles and the Christian faith. According to the legend, among them were Hripsime, Shoghakat, and Abbesse Gayane, who were living in the Roman Empire. Enchanted by Hripsime’s beauty, the Emperor Diocletian (284-305) endeavored to make her his consort against her will. Enduring countless hardships, Hripsime and the virgins found shelter in Armenia. When the Emperor learned of their whereabouts, he asked Tiridates III of Armenia to either send Hripsime back to Rome or marry her if he wished.

In the end, King Tiridates succumbed to her beauty and wished to marry her. But Hripsime rejected the Armenian King, too, choosing to die for her faith. According to the historical references, she endured unbearable tortures—her tongue and body were cut into pieces and she was burned to death. Nine days later Gregory the Illuminator buried their bodies in the holy city of Etchmiadzin in Armenia. Eventually, three churches were built in honor of their memory—St. Hripsime Church, St. Gayane Church, and St. Shoghakat Church.

The Virgins were deified by the Church for their unwavering commitment to their principles and faith. To date the Armenian Apostolic Church celebrates the day of St. Hripsimian Virgins, honoring their symbolic association with the history of Christianization. 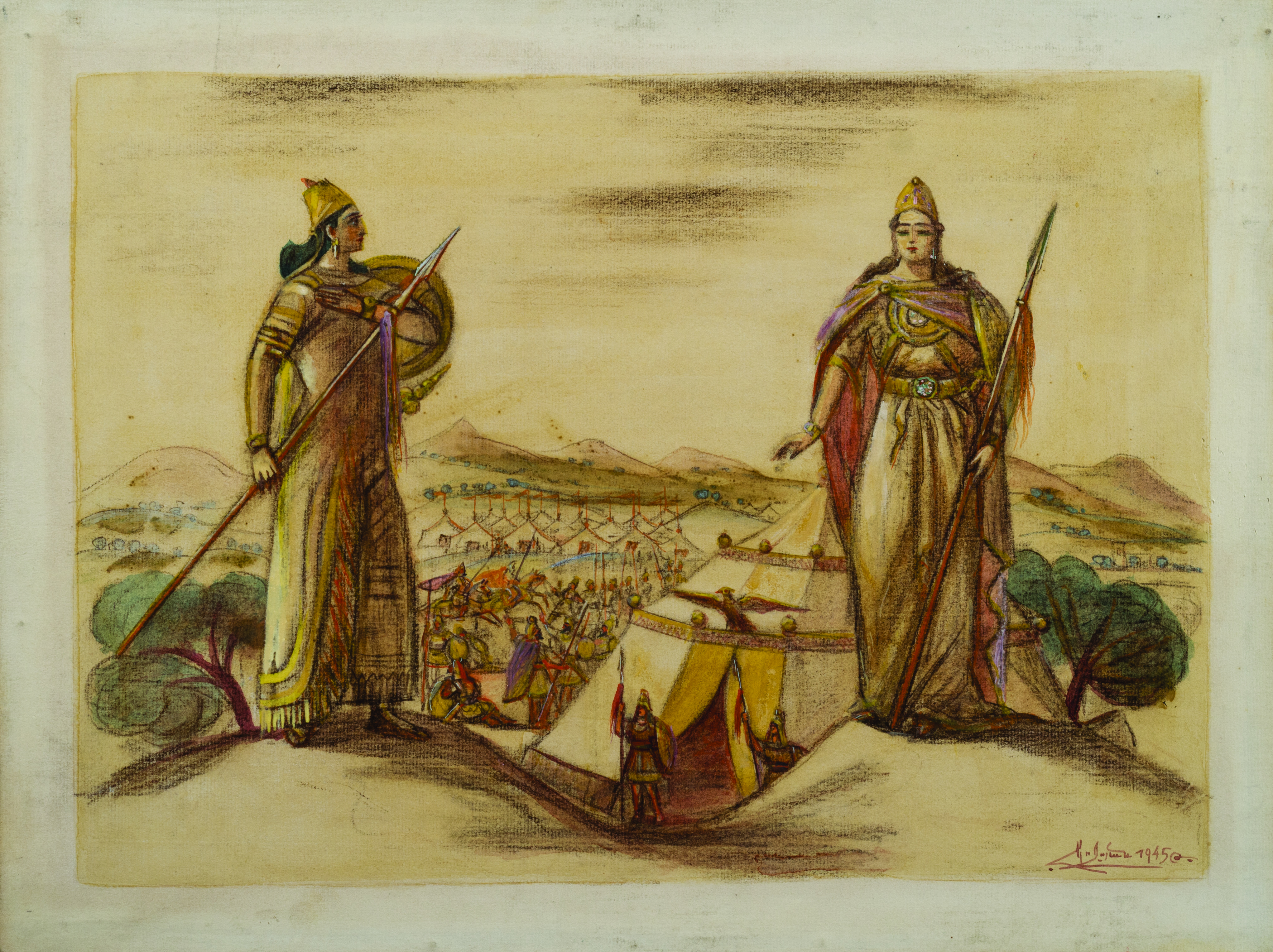 In this romantic tale, Anahit is extoled for her intelligence, talents, and strength. She is described as an exquisite woman but what attracted Vachagan the most is “the strength he saw in her eyes.”

Unrelated to the goddess Anahit, this namesake protagonist enjoyed much popularity in the 19th-century fairy tale by an Armenian writer Ghazaros Aghayan. Anahit was a shepherd’s daughter who dwelled in a remote village but was gifted with countless talents and virtues. The beauty of her mind and her talent in crafts enchanted an Armenian prince named Vachagan, who fell passionately in love with her.

However, when he asked for her hand in marriage, she was not blinded by the lavish gifts of fine clothing, precious gems and jewelry bestowed on her by the royal family. Instead, she rejected the proposal to everyone’s consternation, declaring that a husband should possess knowledge in craft, which a pampered prince like Vachagan did not. So obsessed was he with the idea of marrying her that he learned weaving in a year. Anahit then accepted his proposal and became his major advisor throughout their marriage.

At one point, Prince Vachagan was kidnapped and held for ransom by a heathen priest. The priest sent all the captives to the slaughterhouse but took advantage of those who knew a craft. Vachagan not only wove a carpet, but embedded a message in it for Anahit. He persuaded the priest to sell the carpet to the Armenian queen and upon reading the message, she imprisoned the priest and invaded the heathen city to rescue her beloved.

In this romantic tale, Anahit is extoled for her intelligence, talents, and strength. She is described as an exquisite woman but what attracted Vachagan the most is “the strength he saw in her eyes.” More importantly, the author gave much freedom to his protagonist within the framework of a patriarchal society. “Anahit needs to give her own consent to your marriage proposal,” insisted Anahit’s father to Vachagan.

Her courage is reflected through her deeds and words, as well. She was a maiden that “no young man had her courage and no young woman her talents.” She also flawlessly reigned over the Kingdom when Vachagan was held captive, even performing as a compelling public speaker to mobilize her subjects for an invasion.

As an allegorical tale about an empowered woman, Anahit has received much attention with staged performances, such as the one in Tabriz in 1902. Renewed attention emerged during recent years, too. An animated cartoon about Anahit was released in 2015.

Unlikely global icons and celebrities who have visited Armenia
END_OF_DOCUMENT_TOKEN_TO_BE_REPLACED