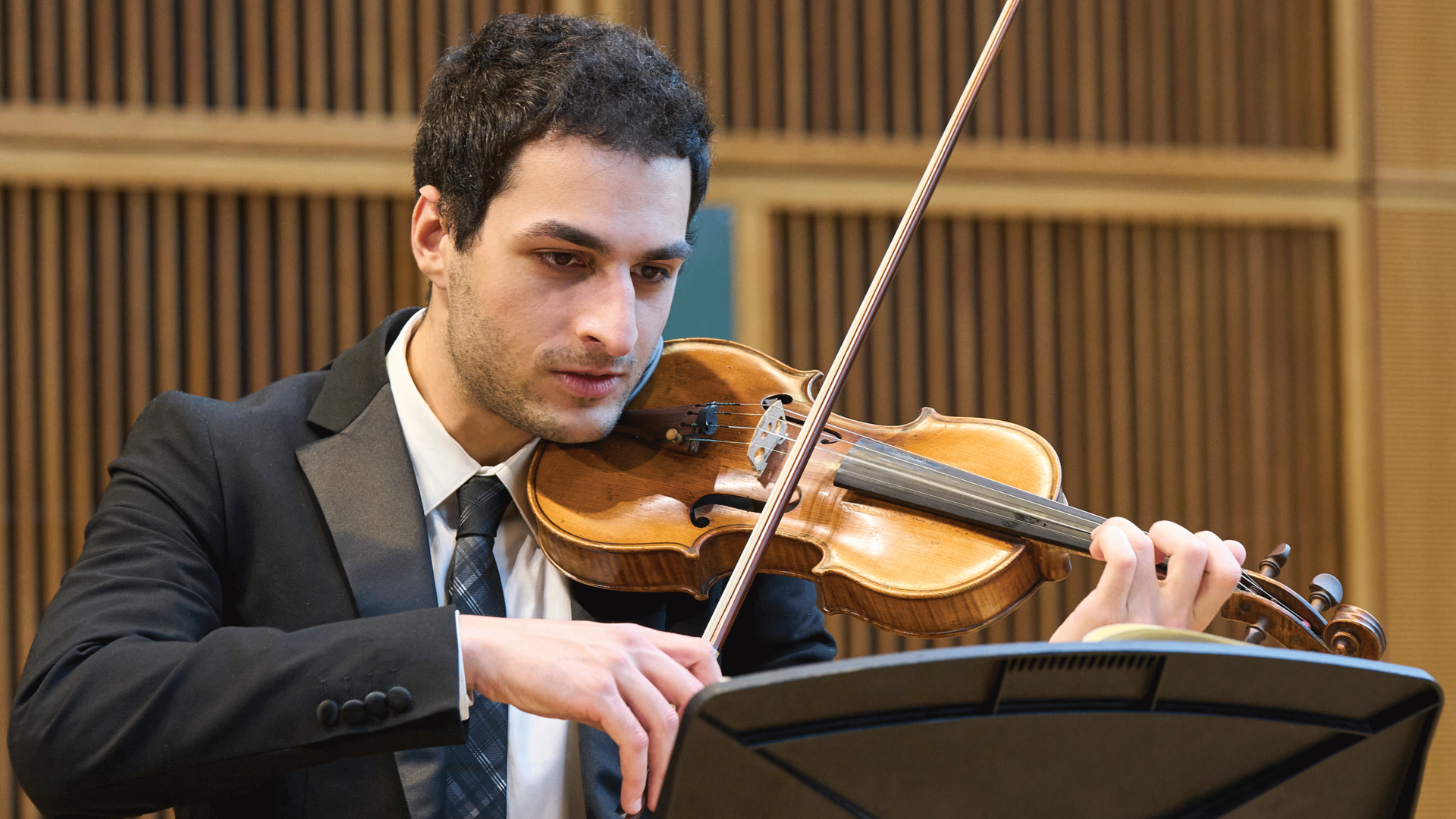 A recipient of an AGBU Performing Arts Scholarship to study violin at the Cleveland Institute of Music (CIM), Belmont-native Haig Hovsepian is in a unique position to use the universal language of music to tell the story of his Armenian ancestry and help the land his forebears once called home overcome its present woes.

The 2020 Artsakh War presented one such opportunity. Concerned about the sons and fathers sent to fight on the ground, Hovsepian took his battle to the stage and in March 2021 organized and played Armenian Music for Peace, a concert to raise awareness about the conflict among friends and faculty at CIM and collect funds to mitigate its humanitarian impact. The initiative raised over $10,000 through a donation link set up by AGBU, which was used to provide relief to families displaced or otherwise affected by the war.

“In my youth, I spent a few summers in Armenia and still have family there. This is in addition to the musical connection I have with the place through my mother and her mother, the great Anahit Tsitsikian. So I felt it was my duty to be a voice for the country whose culture helped make me the musician I am today. And though I have not lived in Armenia, the war pushed me to realize that I have something I can give back,” he explained.

The benefit concert was a milestone in an artistic journey that began largely as an accident. “At four, a violin teacher friend of my mom’s wanted me to test run a kid-sized violin she had. By the time I knew it, I’d fallen into the rabbit hole of music and never came out,” he says.

Soon enough, he was playing for international competitions and racking up prizes across the globe, including North America and Armenia. These set the ground for his orchestral debuts with the Waltham Philharmonic, the Concord Orchestra, and the Youth Orchestra of New England Conservatory, culminating in his engagement with the acclaimed Boston Pops Orchestra at Symphony Hall—“a dream come true” for the young prodigy.

A recipient of the prestigious Max Reger Foundation of America Ambassador Award for academic excellence during his time at New England Conservatory, his first alma mater, Hovsepian’s talent has also graced the stage at Carnegie, Jordan and MIT’s Killian Halls.

In middle and all the way through high school, he also picked up the saxophone in an attempt to expand his musical horizons through the “performative freedom” of jazz, eventually earning himself a spot in the school jazz band, and later its jazz combo and wind ensemble. Backed by “a few of the guys from school,” he even scored a handful of gigs at the local jazz clubs in Boston.

I want to be involved in the communities, to experience their joys and their struggles and not just say that I supported them from afar.

Not that any of it came easy. Accompanied on the piano by his mother, who didn’t expect to see her son in music to begin with—‘We already have enough musicians in the family,’ he remembers her saying—Hovsepian spent countless hours adding “pennies and dollars” to his “jar of progress” as a performer, even as he learned the meaning of discipline through his mother’s incessant calls to practice.

At Meadowmount School of Music, a summer school for aspiring performers founded by Armenian American violin master Ivan Galamian, study with mom was replaced with a strict policy of practice lasting five hours a day, interrupted only by more rehearsals and classes. “I’d never worked that hard and that long in my life up until then. It was very intense,” Hovsepian recalls.

But were it not for all the sweat and tears and “the undying support of my parents and the wonderful people that have accompanied me on this incredible journey, including those at AGBU, I wouldn’t be anywhere near where I am today,” says Hovsepian. So when the time came for him to give back, he was ready.

As a regular of the National Public Radio’s From the Top program, he has leveraged on many of his performances as a platform to raise money for charitable causes like the Gifts of Hope telethon, organized by the Belmont Media Center to help stock up the Boston suburb’s food pantry, as well as for the Joslin Diabetes Center and The 5 pm Series. “I want to give back as much as I can to the communities in Boston and Cleveland that have done so much for me on my way to success,” he says.

Banking on the success of the Armenian Music for Peace concert played earlier this year, Hovsepian says he is hoping for another benefit concert next year, but on a larger scale this time and with bigger Armenian music names to generate even more support for Armenia and Artsakh.

In the long run, Hovsepian’s plan is to move to Armenia and live there, even if not permanently. “I want to be involved in the communities, to experience their joys and their struggles and not just say that I supported them from afar. I think that would be a really powerful experience for me both as a person and as a performer and would help consummate that pull I’ve always felt for Armenia. Who knows, I might even go there to teach,” he says.

A dialogue with historian Julien Zarifian on social justice
END_OF_DOCUMENT_TOKEN_TO_BE_REPLACED

How lawyer Natalie Samarjian turned a profession into a calling
END_OF_DOCUMENT_TOKEN_TO_BE_REPLACED

When it comes to U.S. policy in the Middle East, human rights leader Sarah Leah Whitson calls it like she sees it
END_OF_DOCUMENT_TOKEN_TO_BE_REPLACED