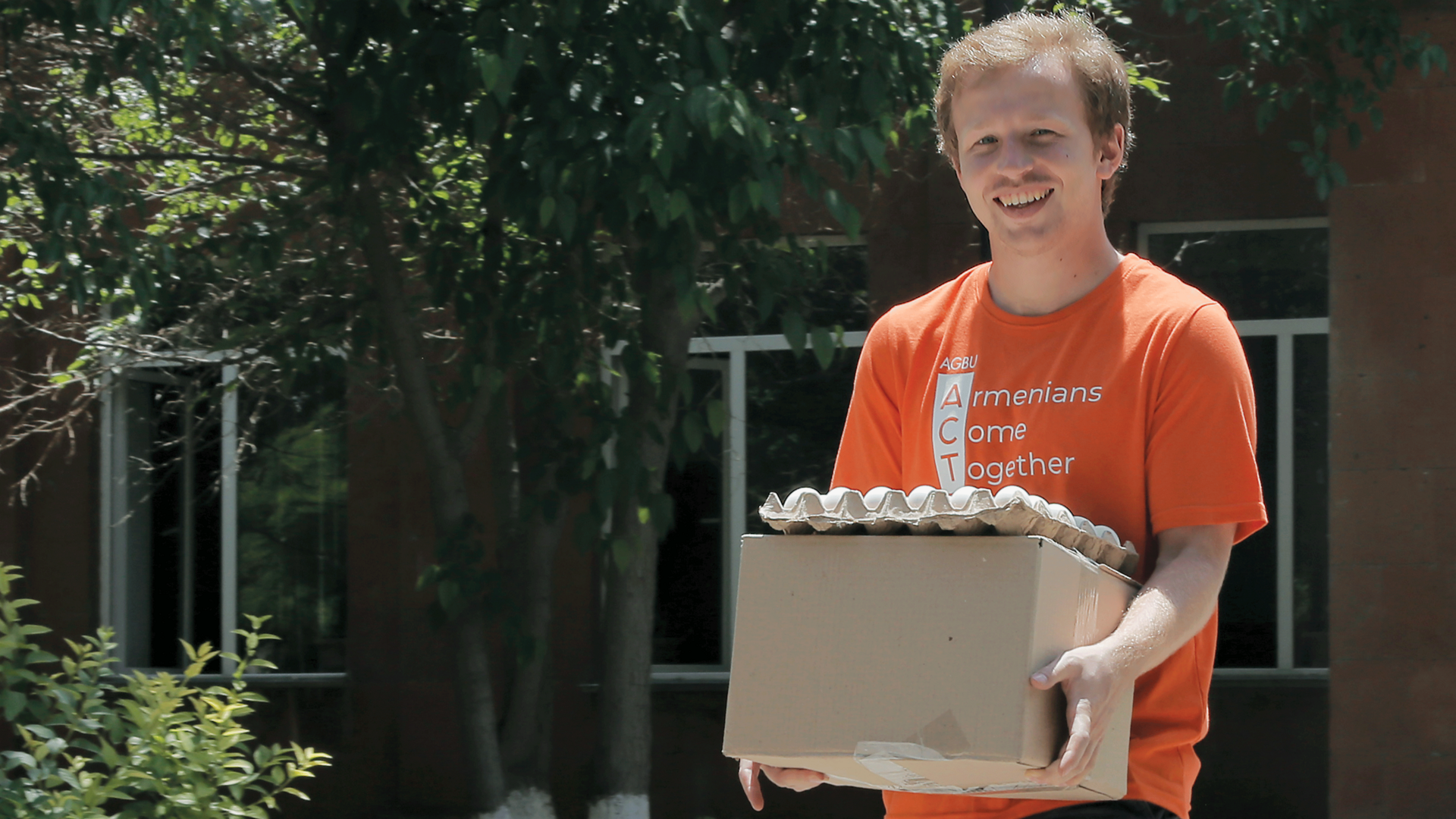 It’s just past daybreak on a Wednesday morning in New York City but Clément Chantre has been wide awake, emailing members of the French Parliament about a budding new project to renovate a kindergarten classroom in the town of Chambarak, Armenia.

This is only the first item on his agenda. Throughout the day, he’ll tackle courses at Columbia University and network with other lawyers and nongovernmental organizations to fundraise for the Armenian school he discovered while on a volunteer humanitarian aid mission called AGBU Armenians Come Together (ACT).

A Frenchman born and raised in the eastern suburbs of Paris, Chantre was surrounded by a family that valued service, led by their faith. He’d absorbed this mindset while participating in missions to Burkina, Africa and volunteering as a legal advisor for refugees in France.

Last September, while law students were fretting over the start of the academic year, Chantre felt deeply affected by the story of Artsakh, told to him by an Armenian friend. A self-starter at heart, he was troubled by the unfolding human rights infringement, lack of international aid, and illegal use of chemical weapons. Reason enough to decide to take a gap year to pursue volunteer work with displaced people, still in the throes of the COVID-19 pandemic and an unknown outcome of the 2020 Second Artsakh War.

Chantre discovered AGBU ACT through mutual friends and traveled at his own expense to Armenia. For this non-Armenian 20-something who didn’t speak a word of Armenian, this was no small undertaking. But Chantre felt in his gut he had to do anything possible to help, saying, “To make a difference and to achieve justice, you have to enforce it yourself.”

His first operation involved around the clock activities, packaging and delivering food boxes day after day and teaching English courses to kids on afternoons at the AGBU Vahe Karapetyan Center. This grueling cycle only fueled his resolve to contribute to the community.

To make a difference and to achieve justice, you have to enforce it yourself.

He later spent a week in Artsakh, amazed by the resilience of the community in Stepanakert. “They were all deeply attached to their country and to their roots. Sometimes in Europe we forget how lucky we are to be secure, to have land, to have a sense of safety of property.”

Injustice, to Chantre, now has a deeper meaning beyond a textbook case study.

Charged by his experience with AGBU ACT, he is now partnering with AGBU France and AGBU Armenia, SOS Chrétiens d'Orient, and a growing list of organizations to raise awareness and help, all while he finishes up his semester in New York.

For the soon-to-be corporate lawyer, there aren’t enough days in the week, but there’s no stopping his mission to rebuild educational institutions for the next generation of students in Armenia.

A dialogue with historian Julien Zarifian on social justice
END_OF_DOCUMENT_TOKEN_TO_BE_REPLACED

How lawyer Natalie Samarjian turned a profession into a calling
END_OF_DOCUMENT_TOKEN_TO_BE_REPLACED

When it comes to U.S. policy in the Middle East, human rights leader Sarah Leah Whitson calls it like she sees it
END_OF_DOCUMENT_TOKEN_TO_BE_REPLACED