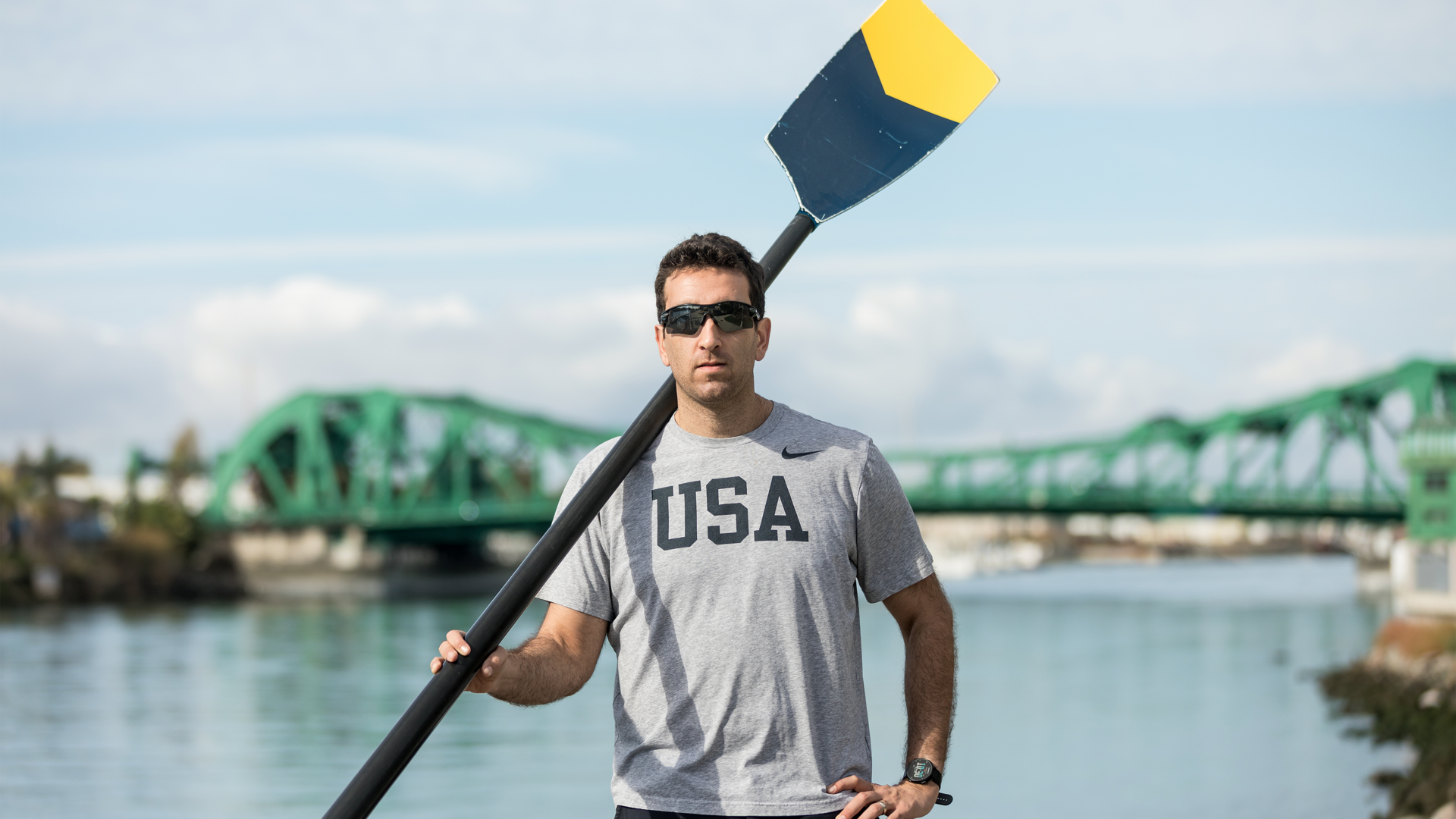 
At six feet five inches tall, Nareg Guregian easily stands out in a crowd. It is, however, his demeanor—not his stature—that leaves the biggest impression. Easy-going and even-keeled, this cool Californian exudes the relaxed attitude his home state is known for. That is, until he gets in on the water. Like flicking a switch, Guregian dials up a competitive streak that has propelled him to the heights of his chosen sport, always in pursuit of a rare chance to prove himself against the best. “There are not a lot of opportunities to show your speed in rowing—maybe three or four races a year. When you win, it’s just this great feeling of elation that is difficult to describe. It’s addictive.”

Guregian’s impressive rowing career is marked by a string of successes in national and international championships. He won consecutive victories in the men’s eight event in the 2013 and 2014 World Rowing Cups, a bronze medal at the 2013 World Rowing Championship, a bronze medal at the 2015 Pan American Games, and then competed in the 2016 Olympics in Rio de Janeiro—an experience he will never forget. “I was so happy after dreaming about it for so long, but at the same time knowing how few people even qualify I felt really fortunate and honored to have this opportunity to represent my country,” he says. “To have the ‘Olympian’ moniker is definitely humbling and indescribable.”

His record is all the more remarkable given how late he came to the sport in his senior year of high school. His natural talent—even as a novice—was immediately noticeable. He landed at the University of California, Berkeley’s rowing program led by freshman coach Geoff Bond, the legendary Steve Gladstone, and later, U.S. Olympic coach, Mike Teti. Within a few short years he went from bottom-level recruit to being named the PAC-10 Conference Rowing Athlete of the Year after stroking the varsity boat to victory over historic rival University of Washington (UW) by one-fifth of a second to win the 2010 IRA National Championship. Having lost to UW the year before, the hard-fought victory was the crowning achievement to his collegiate career, one Guregian to this day considers one of his proudest moments.

There are not a lot of opportunities to show your speed in rowing—maybe three or four races a year. When you win, it’s just this great feeling of elation that is difficult to describe. It’s addictive.

Despite his natural ability and competitive drive, Guregian says to be successful as an athlete also requires an incredible degree of self-discipline. The road to Rio took six long, grueling years of intense training with the National Team based in Princeton, New Jersey. Six days a week he was awake at 5:30 a.m. and on the water by 7:00 a.m. for a strenuous two-hour practice. After a hearty breakfast high in protein and loaded with calories, he would rest up before another tough practice in the afternoon. “It is very hard to stay motivated in November when your race is in August. You are pushing your body to its limits day in and day out with no end in sight, and that takes a huge physical and mental toll,” he admits.

Guregian considers himself extremely fortunate to have been coached by some of the best rowers and coaches in the world, including three-time U.S. Olympian Bryan Volpenhein, five-time Olympic coach Mike Teti, and Australian Olympian Tim McLaren—without whose support, he says, he could not have succeeded. “You have to trust yourself but having the right support group around you is really important,” he says. “I have really supportive friends, family, and teammates who made this all possible.”

As for being disciplined, the good-natured California native says he has his hard-working parents Ani and Mirican to thank. After moving to California from Istanbul in 1980, the couple both began careers in the medical field and always encouraged Nareg and his sister Noreen academically. “I saw both my parents working really hard and putting in long hours,” he recalls. “Laziness was never tolerated.”

Growing up ensconced in an Armenian community in North Hills, surrounded by Armenian friends and classmates at the AGBU Manoogian-Demirdjian School (MDS), Guregian never considered his upbringing and parents’ values as anything other than normal. It was not until he got to college that he realized just how much attending an all-Armenian school provided him with a unique perspective. “I remember telling friends that my grandparents would cause a scene if my sister and I didn’t finish the food on our plates, going off about how lucky we were just to have food on the table. To me that was just normal. To my teammates, it was crazy.” Looking back now, Guregian realizes the extent his Armenian heritage—nurtured both at home and at AGBU MDS—helped shape his success. “That definitely made me who I am. I think it gave me a different perspective growing up in two cultures.”

Guregian’s worldview expanded considerably once he began competing internationally with the U.S. Rowing team. His easy-going personality off the water won over fellow oarsmen from diverse cultures around the world. In each case he says their commonalities far outweighed any differences. The sport of rowing would eventually provide Guregian with much more than close friendships.

While training in Princeton, New Jersey in the summer of 2013, Guregian met Katelin Snyder, coxswain for the U.S. women’s national team. The pair became engaged while preparing for the 2016 Olympics in Rio de Janeiro, where Snyder won a gold medal in the women’s eight. Now married, Guregian is taking a break from competition to work at the Global Sponsorships division of Visa. The position allows him to combine his degree in media studies and mass communications with his love of sports, working with partners that include the National Football League, soccer’s international governing body FIFA, and of course the International Olympic Committee.

As disciplined as ever, Guregian still wakes up early and heads to the gym most mornings for an intense 30-60 minute workout rowing, biking or running, and has not ruled out returning to international competition. He is also considering sharing his expertise as a coach, having had a very fulfilling experience working with the local junior club rowing team in Princeton. “Rowing is my life,” he admits. “And it is kind of scary to think that the chances of me being nearly as good at anything else as I have been at rowing are pretty slim.” While he contemplates his future, Guregian is looking forward to the next opportunity to give back to the sport that has given him so much.

Benjamin Kemanián reflects on his upbringing and life in Montevideo
END_OF_DOCUMENT_TOKEN_TO_BE_REPLACED